Happy Holidays/Merry Christmas! I hope you all are having a great time with family and friends and that you enjoy this MOC I made to represent this festive occasion. My primary goal was to make a MOC using only Red, Green and White (I included white because of Santa and Candy Canes).

Bio: Koa is strange and mysterious being a hailing from the Ice Region of Okoto. So cold is this region that even the most veteran of the Region’s inhabitants dare not venture there. Regardless, every year Koa runs across the island of Okoto with unbelievable speed delivering Candy, Clothes, and Toys to all the good Boys and Girls of Okoto. This strange ritual occurs once every year,in the span of a day. Afterwards Koa retreats back to his icy home to begin anew making new gifts for the next year to come. Some of the islanders doubt Koa’s existence but to the children at least he is VERY much a real person!

Weapons and Equipment: Koa has only two tools (aside from his armor), the first is his Mask which grants Koa amazing speed, enough to traverse the entire island in the span of a day! The second is his Hammer, which is said to forge almost ANYTHING! Despite it’s intimidating appearance Koa has never used it in attack or defense and no one really knows why Koa carries it around during his swift delivery of gifts (though some kids claim it shoots the most delicious candy) 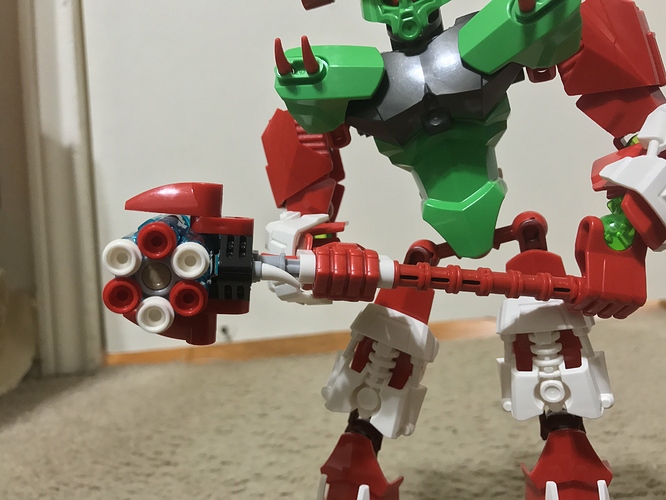 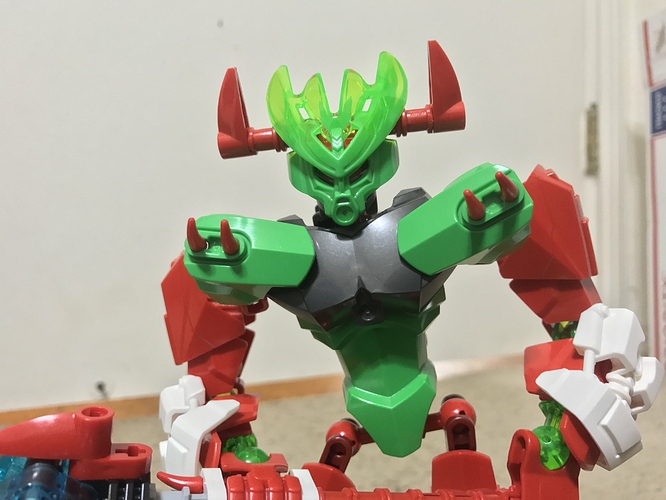 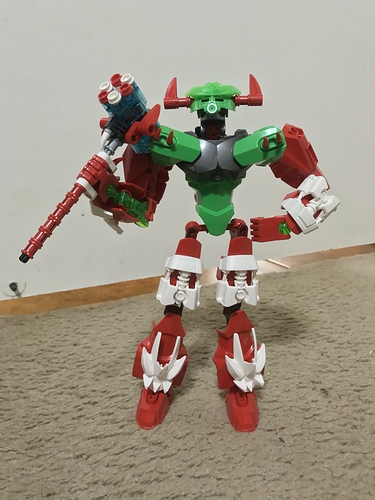 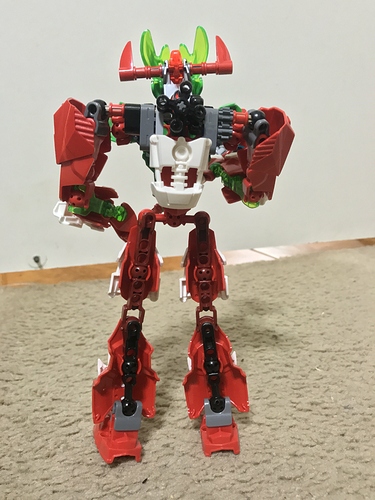 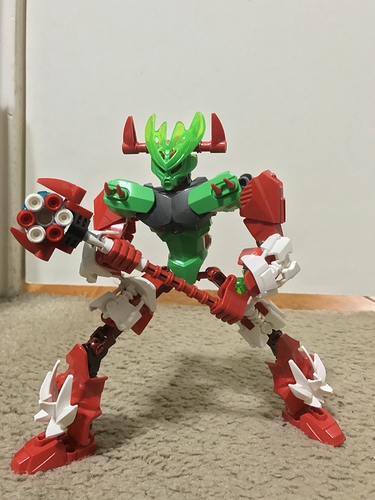 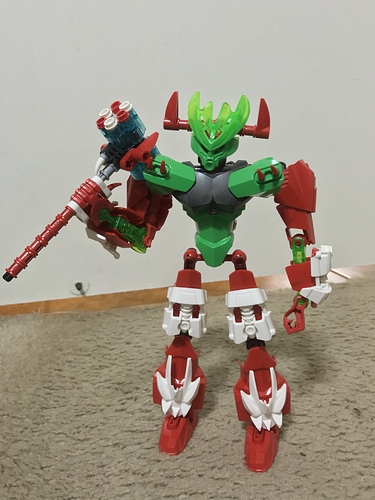 So its like an Okotion Santa, only buff, and with a giant mini-gun hammer? Amazing. 10/10.

The gunmetal doesn’t work, and the green shells on the chest are attached at a weird angle.

Yah I agree, the gunmetal chest was because there is no green or red shell chest armor w/out prints on them (I wanted to use Skull Slicer’s but the green seemed too off for me).

Gunmetal was a bit odd, though i understand the limitations of CCBS pieces might be a factor as to why you used it. Unsure what CCBS upper body piece you could replace it with…

and the green shells on the chest are attached at a weird angle.

To be fair, Ekimu had the same issue in his set. I think its just that the creator has chosen to use a similar style here.

Yah that’s exactly what I was going for. I was trying to make him come off more like the some of the Protectors and and Ekimu but I think that gunmetal chest sticks out like a sore thumb and kind of upsets the coherency of the color scheme. I hope to fix that bit if no new green or red CCBS pieces come out I might just paint a Tan one red or green and put it on there

The gunmetal doesn’t work, and the green shells on the chest are attached at a weird angle.

Basically this. Also, the legs feel a bit too long for my liking

Yah. They are really quite disproportionate to the rest of the MOC. I probably will go back and re-work those entirely tbh. I wanted him to be taller than the 2015 Toa whilst still having a fairly standard CCBS build so I cheated some proportions to do that but more than likely I’m either going to bulk up/heighten the upper body and increase the arm length or more simply, chop up those legs and play around with something that fits better whilst still satisfying my goal.

Looks cool. Though I think that the green and the red could’ve been balanced out better.

Which is canon BTW.