Allow me present to you: Kruhdak, Toa of Gravity. 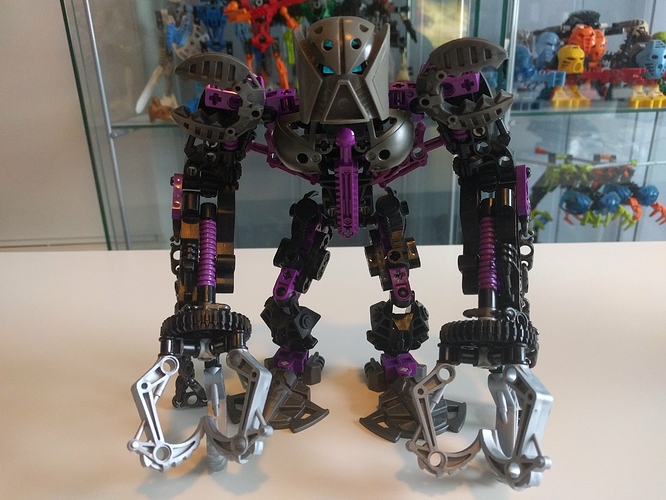 Weapons/Mask/Element:
His hands are two clawshots which is used to grab his foes and swing them around, slamming them into the ground or walls. He manipulates gravity to make swinging foes easier, and slamming them more effective. The mask of telekinesis is used to control his hooks mid-air, so hitting moving targets becomes less of a problem. It also helps with swinging targets around. 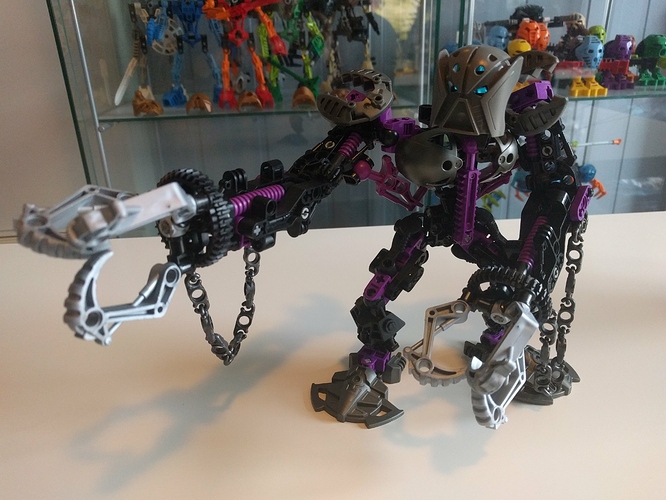 Personality:
Very quiet, does not usually speak unless spoken to, or if he has something important to say. Demands respect in order to respect others and has little to no mercy for his enemies. Loyal to his allies and always honest. Can work both alone and with a team, although he usually don’t get along with unfamiliar people very well. 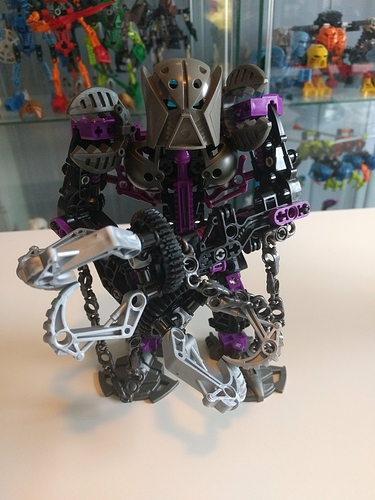 The build:
I started building an arm, then I tried to make a fitting body. I mainly used black, but tried adding as much purple as possible to give him a more interesting look. I also added som pieces in pearl-dark-gray to make the mask not stand out as much, and make him look more armored. His arms can move very freely and with possibilities for posing. He has extra limbs to hold his main arm piece in place, and a balljoint in the shoulder to hold the gear part in place. The lower part of the arm can also be extended to give extra length to the chain, and have an extra limb when pulling the chain. (Left arm extended in the picture below) 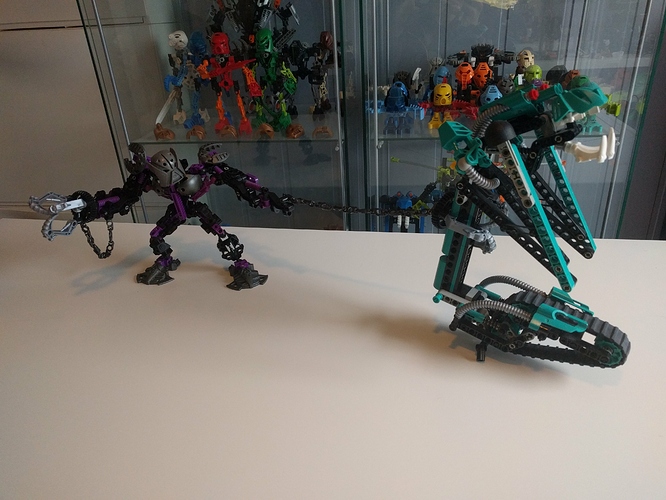 So what do you guys think? any feedback is appreciated feedback!

More pictures of Kruhdak can be found on my flickr, HERE

I appreciate the uniqueness, very good job! I like his personality too.

I really love the color scheme, but the torso seems a bit gappy.

This feels like something taken straight out of G1, and I love it!
Also, like those claw shots!

@Altair, @Gravityhurts123 Thank you both!

@Joe I never tought about it, but now as you metnion it I see what you mean. Thanks!

well, this is different.

The claw hands are nice.

I am jealous of your amount of old school purple =P As for the MOC, the torso is too messy for my liking but you managed to get a nice amount of character into the build so kudos for that.

Link would be jealous of them clawshots. ( ͡° ͜ʖ ͡°)

The shoulders are a bit wide, but, otherwise,

Ya ever play Half Life? This guy’s claw, as well as the being a Toa of Gravity are reminding me heavily of the Gravity Gun from the series.

Not at all what I was expecting, yet it managed to still be really cool! Very unique design, I like the use of the throwbot pieces, it’s something I rarely see.

Thanks everyone for the feedback, it’s really appreciated!

@Maethorneth it’s not difficult getting a handfull of purple pieces on bricklink, they are pretty cheap if you get them used.
I guess the torso does look a bit messy, I think I have just got used to it.

@HewkiiDaKohliiHead Guess where I got my inspiration from

@OraNui The Throwbot pieces are really cool, I try to use them when I can, but they aren’t often very usefull. Thanks for the feedback!

@squeaverking Yes I have played a lot of Half-Life, but this was completetly unintentional. Just imagine what you can do dual-wielding the Gravity Gun! 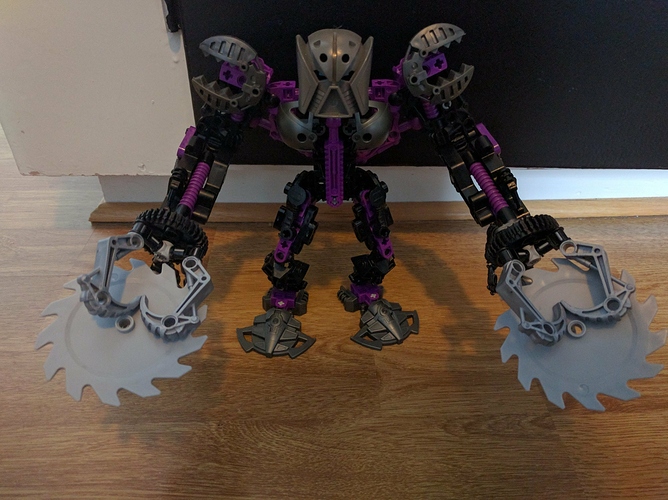 Oh god, he has Buzzsaw Frisbees!

I love this guy so much! The colours work really well and those weapons are brilliant! I really like the use of the purple Mata limbs (for that matter, all of those unique Throwbots/early G1 parts you used are really great). I’m just not sure about the gunmetal feet. I feel like they would need just a tad of gunmetal in the legs to be properly balanced out.

@legomaster1378 Thanks a lot! I actually ordered those armor pieces in gunmetal, but the seller messed up. The MOC had already been standing for 1-2 weeks, and I didn’t want to wait another week before posting it

They arrived today actually, so I guess I could show a picture or two with them: 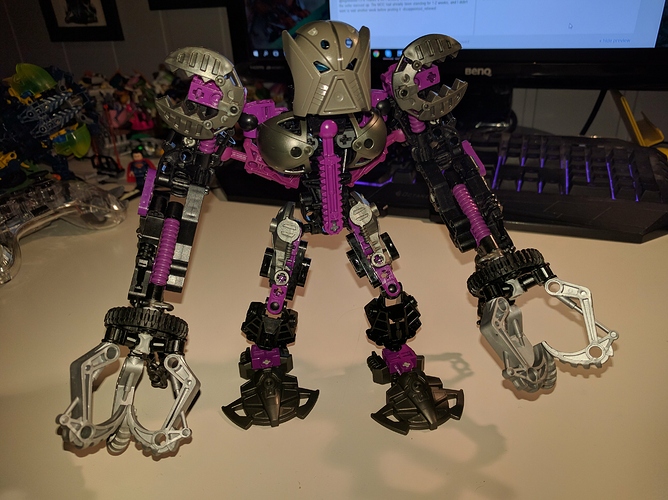 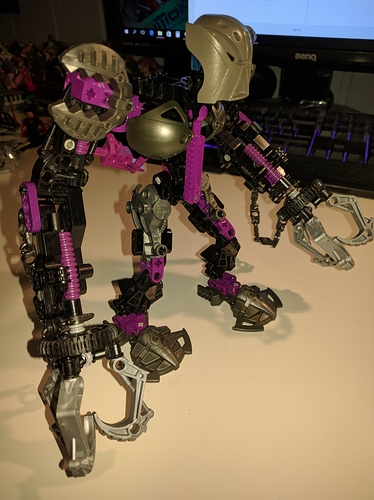 They arrived today actually, so I guess I could show a picture or two with them:

What armor pieces did you swap out? Forgive me, I don’t notice a difference.

, but I swapped the hips (the inikia shoulder pieces)