This guy was actually the first (documented) moc I made after a long lull in mocing, as you can probably tell I’m a bit weird, some of my mocs aren’t the best and I enjoy making custom-ish limbs and such every now and again. Also for those who want to know I will be making a picture and description of the scraplands later after I get it more cleaned up and such, do have quite a bit of it thought out so far. 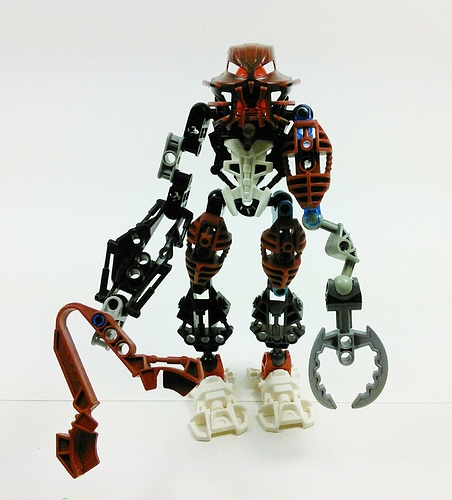 Ksarel was originally a failed experiment by the makuta. They had been trying to create semi-intelligent masks so the rahi they controlled would be smarter. Ksarel was a flawed mask of creation the flaw he could only create one object and then when ever he created an object he would have to focus his power on it or it would collapse and he could only create objects such as walls and boulders out of his surroundings. When they tested him he showed no signs of intelligence so they put him with the other flawed but possibly useful part’s. What they didn’t know was they had succeeded more than they had ever hoped for he had the same intelligence as a makuta/toa. When the makuta put him with the other parts he created a body for himself by repairing parts so they weren’t as flawed or so they worked and he combined his mask with a mask of Xray vision and a mask of invisiblity. When the makuta discovered what had happened they tryed to capture him so they could run experiments on him causing him to attack them so he could escape. He later befriended the toa when he discovered they also fought the makuta but he told them he came from the scraplands*.
Attitude: shy because of his appearance, very jumpy/nervous because he’s afraid the makuta are going to catch him but when he’s fighting the makuta he becomes extremely violent (it appears he has a slight makuta side) he once almost beat a makuta to death with his clawed hand before the other toa calmed him down.
Toa type: unknown
Mask power: flawed mask of creation he can create objects such as walls or boulders from his surroundings (depending on how big the object is and how long he has to hold it is how drained he gets), flawed masks of xray vision and invisibility the flaws are both of the masks behave in a juvenile and impolite way that one would expect from those types of abilities so when they were combined it gave them enough power to sometimes take over Ksarel for a little bit (he gets beat up for it but he still won’t tell the other toa about the flaw) and you can partially see him when he uses the mask of invisibility but you have to focus.
powers: can generate objects from his surroundings but they collapse the minute the connection of energy from his mask is cut off.
Other attributes: has a clawed hand that can spin at high speeds to dig, has a modified disk launcher that can launch blasts of energy and disks.

@Jayfa Ah heck! It did it again (and now I have part of that song running through my head)! Thanks for pointing that out.

It is my favourite moc ever!!!