“Why me?”
“Because the other Dark Hunters are afraid of you. And you are afraid of me.”
— The Shadowed One and Lariska, Time Trap 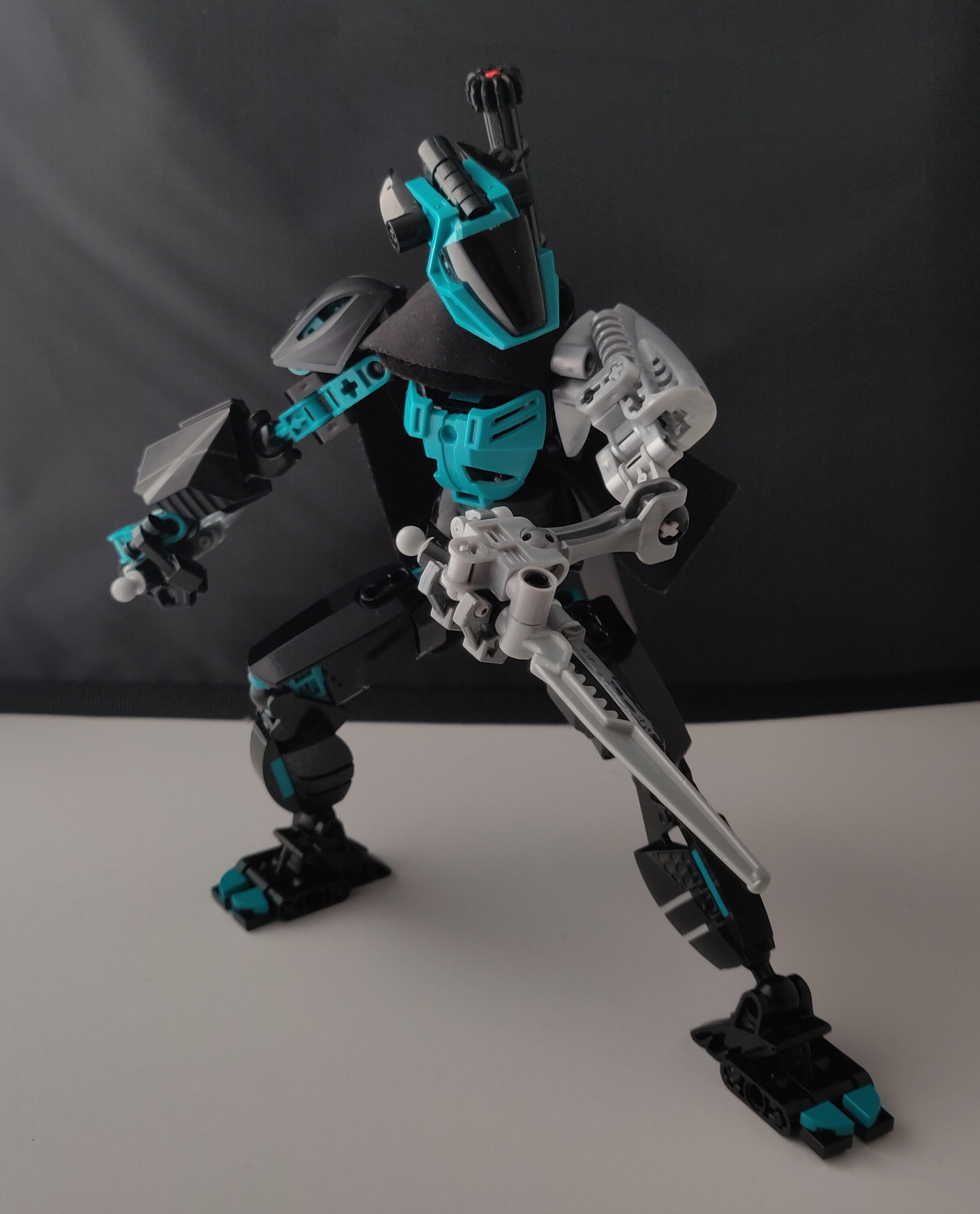 Here’s my entry into the Duckbricks contest, as well as my interpretation of Lariska. 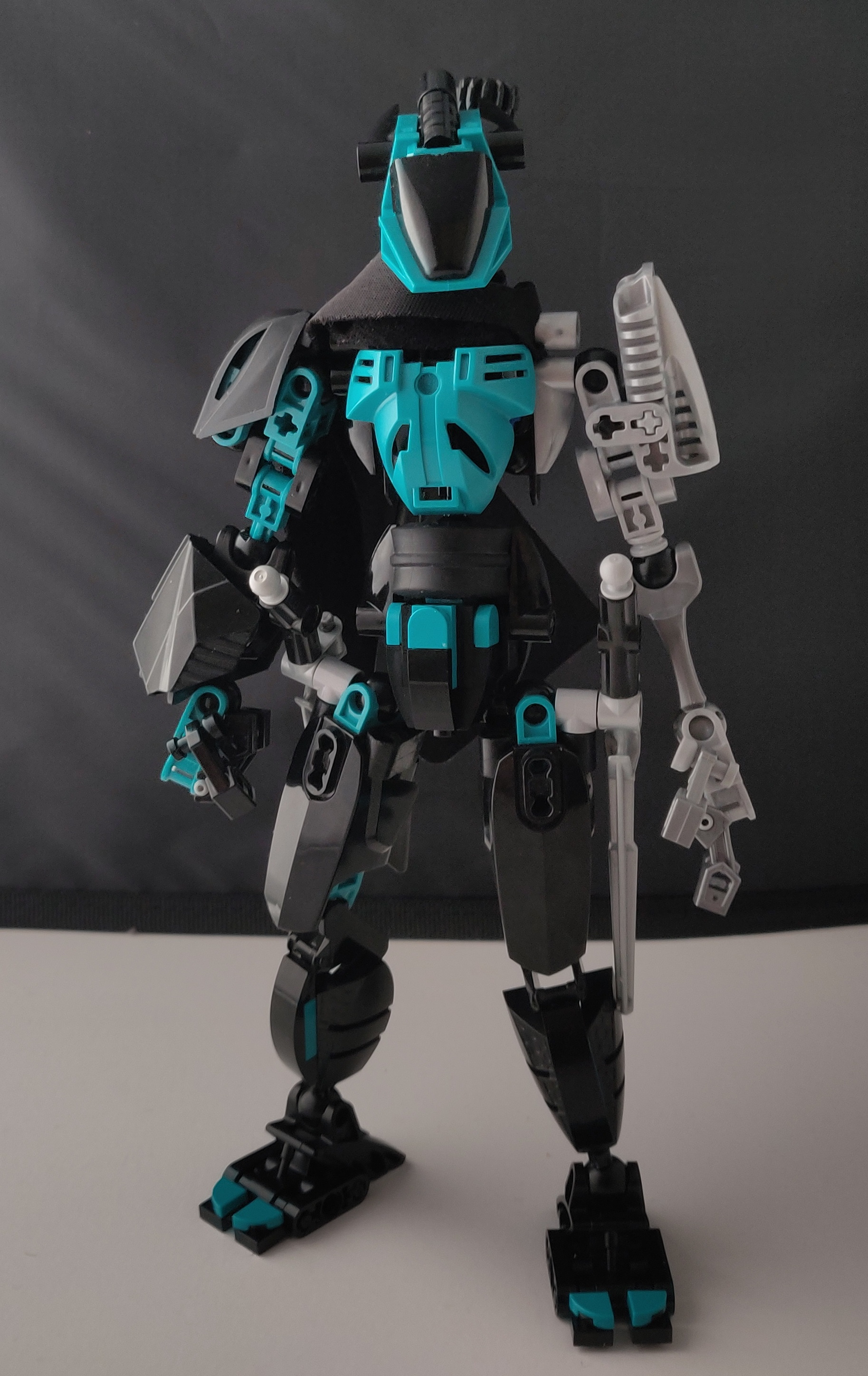 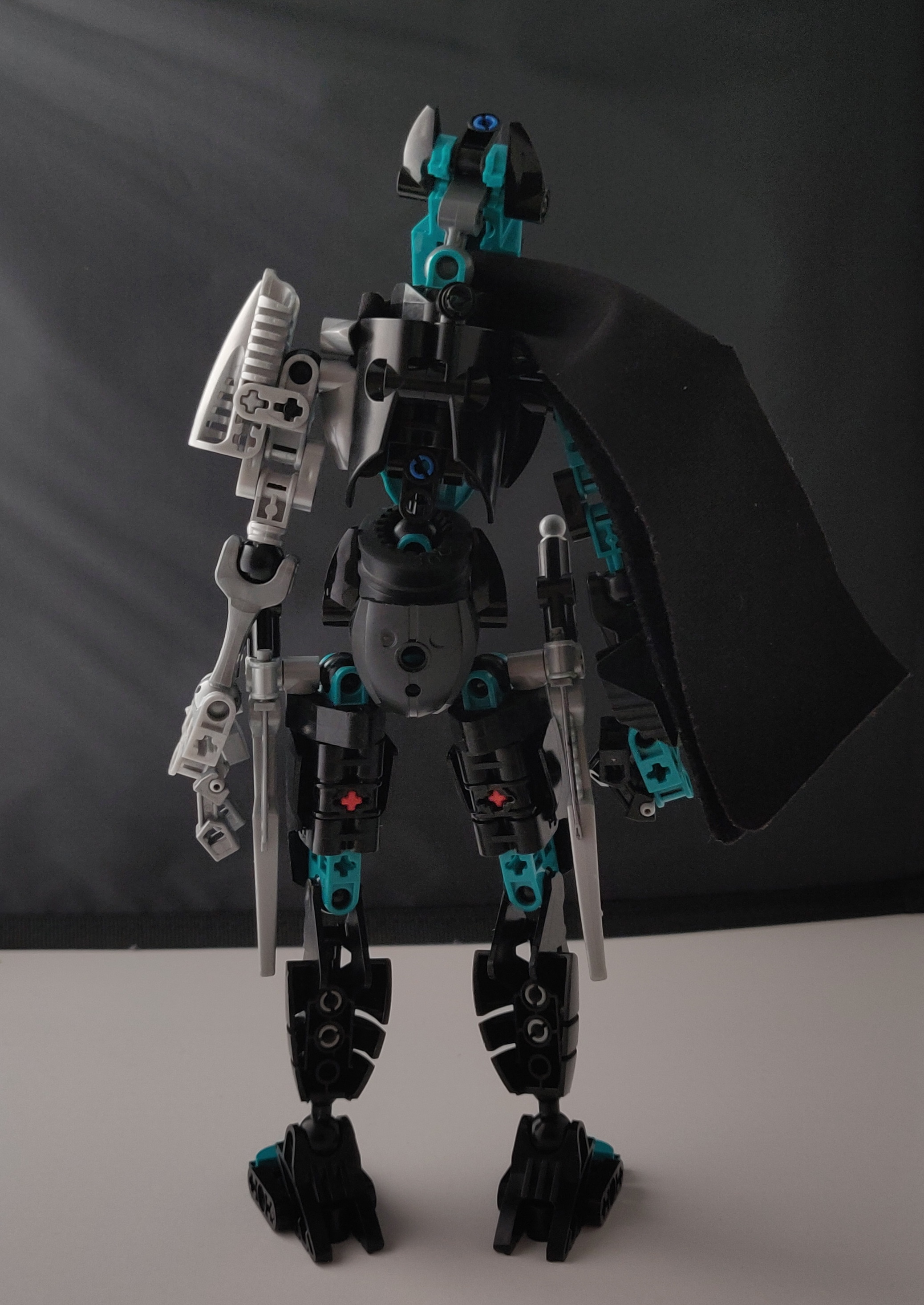 I wanted to emphasize a more “shinobi” vibe, so you might see some Sekiro influence. I’ve done this with some other mocs too. 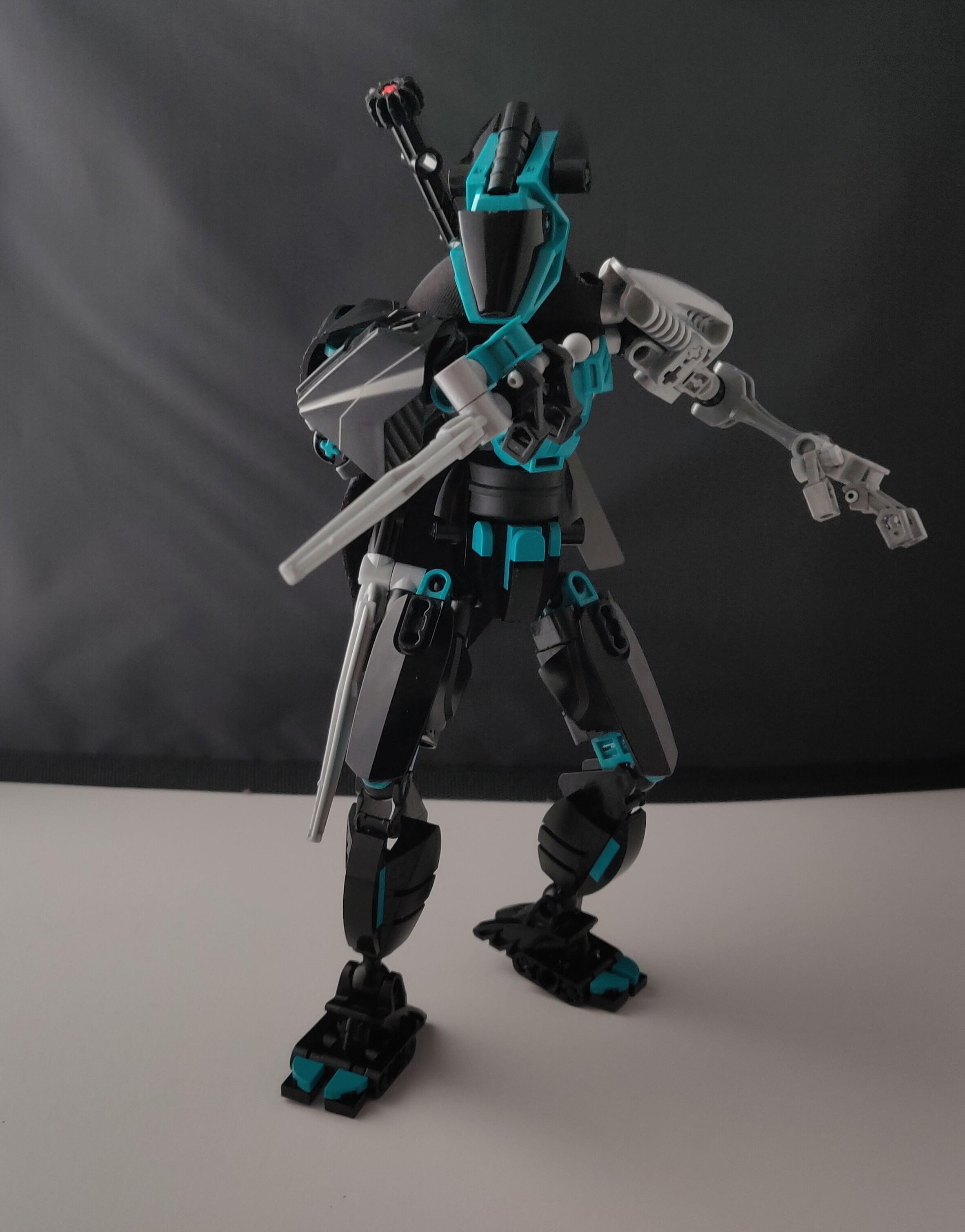 She’s got two daggers and a katana. Her prosthetic goes up to her shoulder. 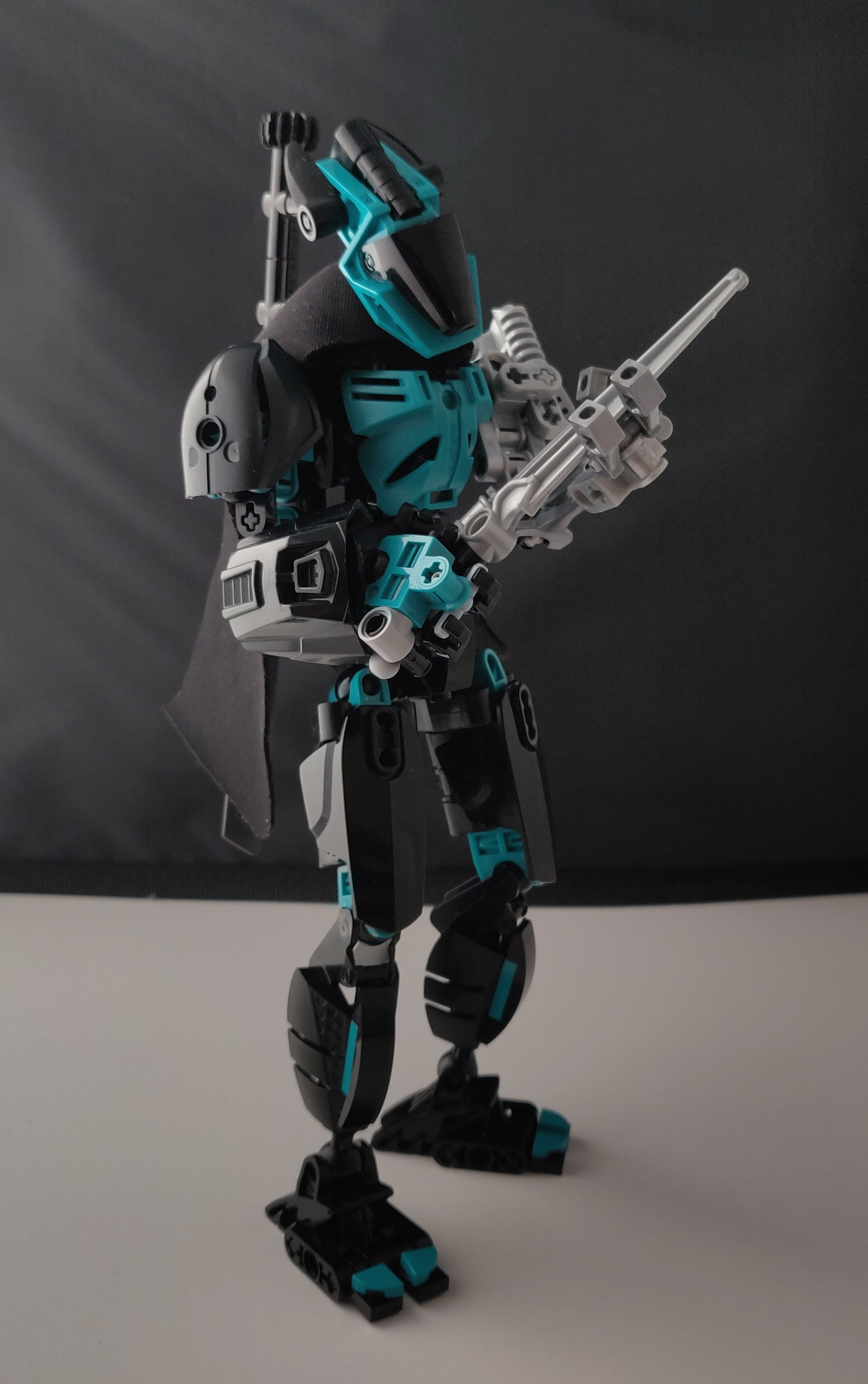 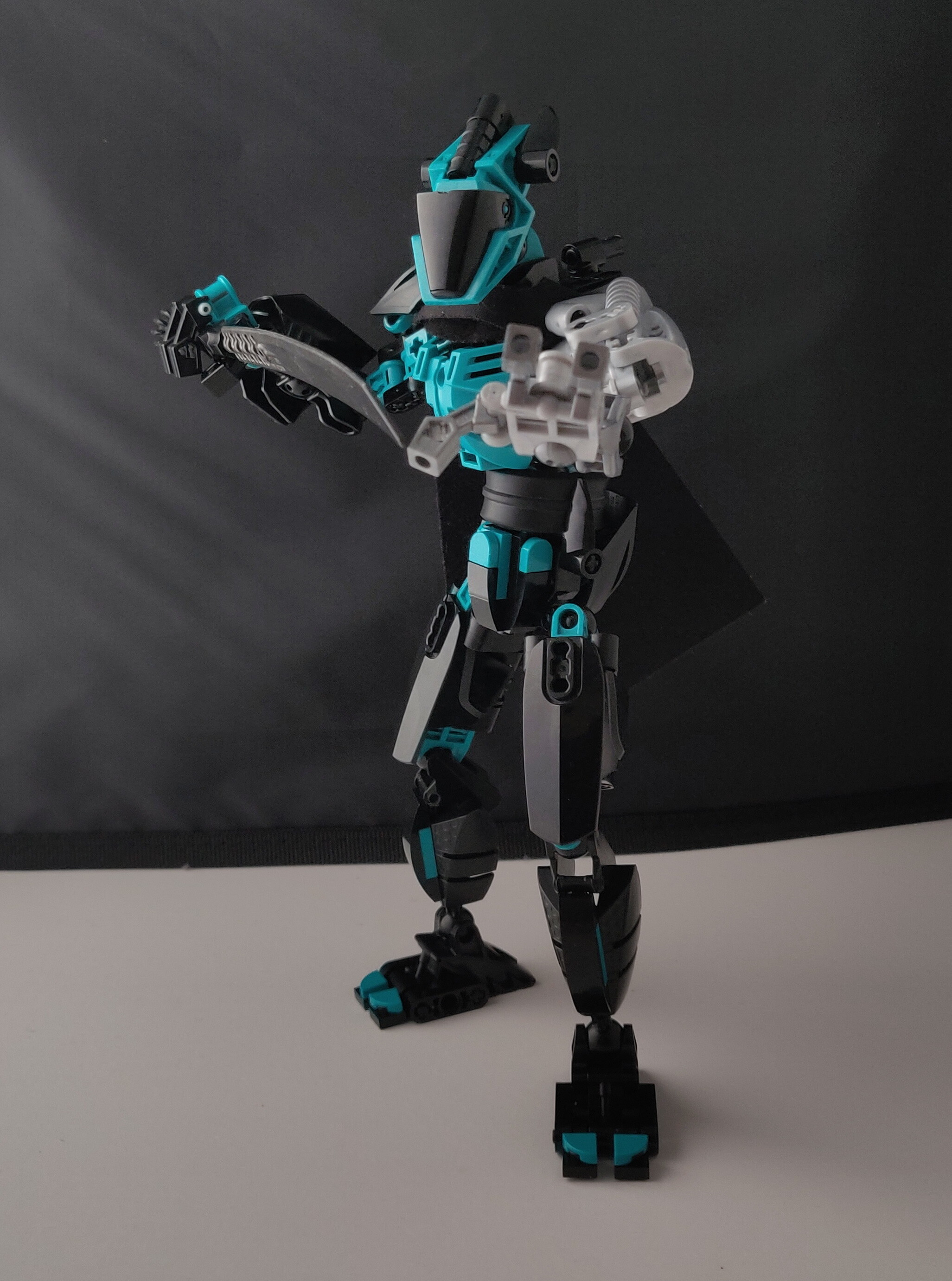 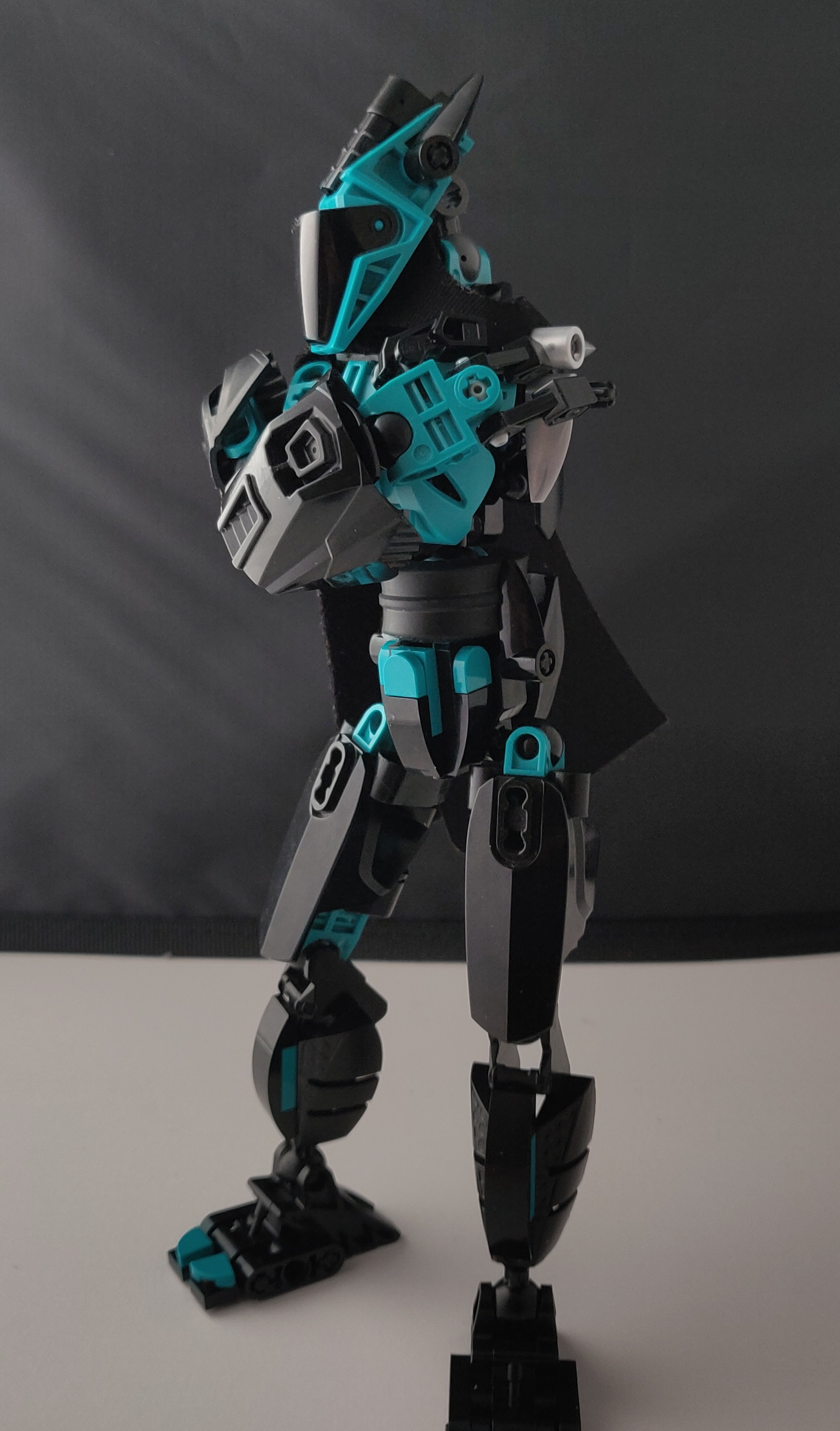 Sometime later, Lariska angered the Shadowed One and lost her left arm as a punishment. It was replaced with a completely mechanical one. 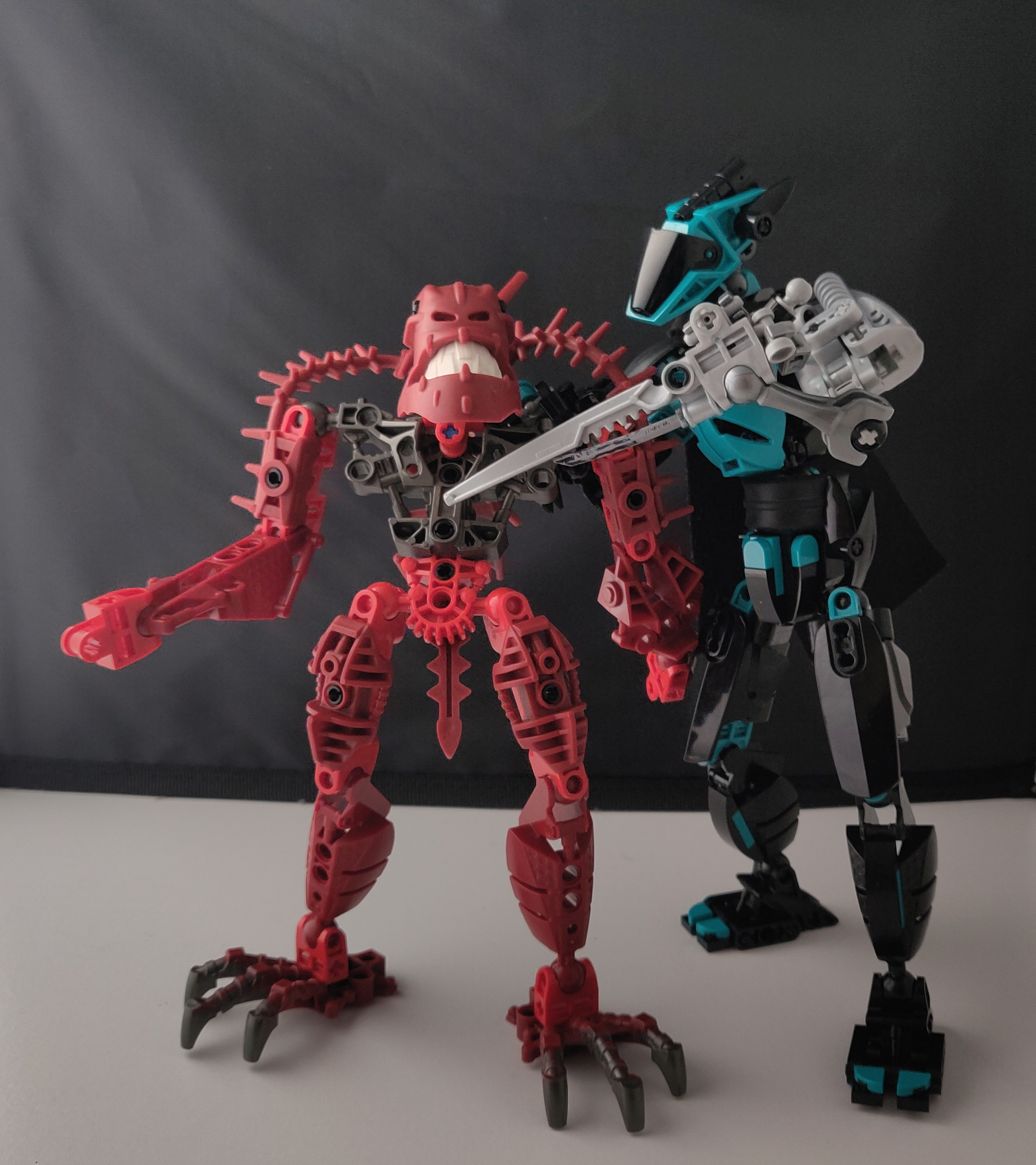 “Get up, Rahi bones. Lariska’s class is now in session.” 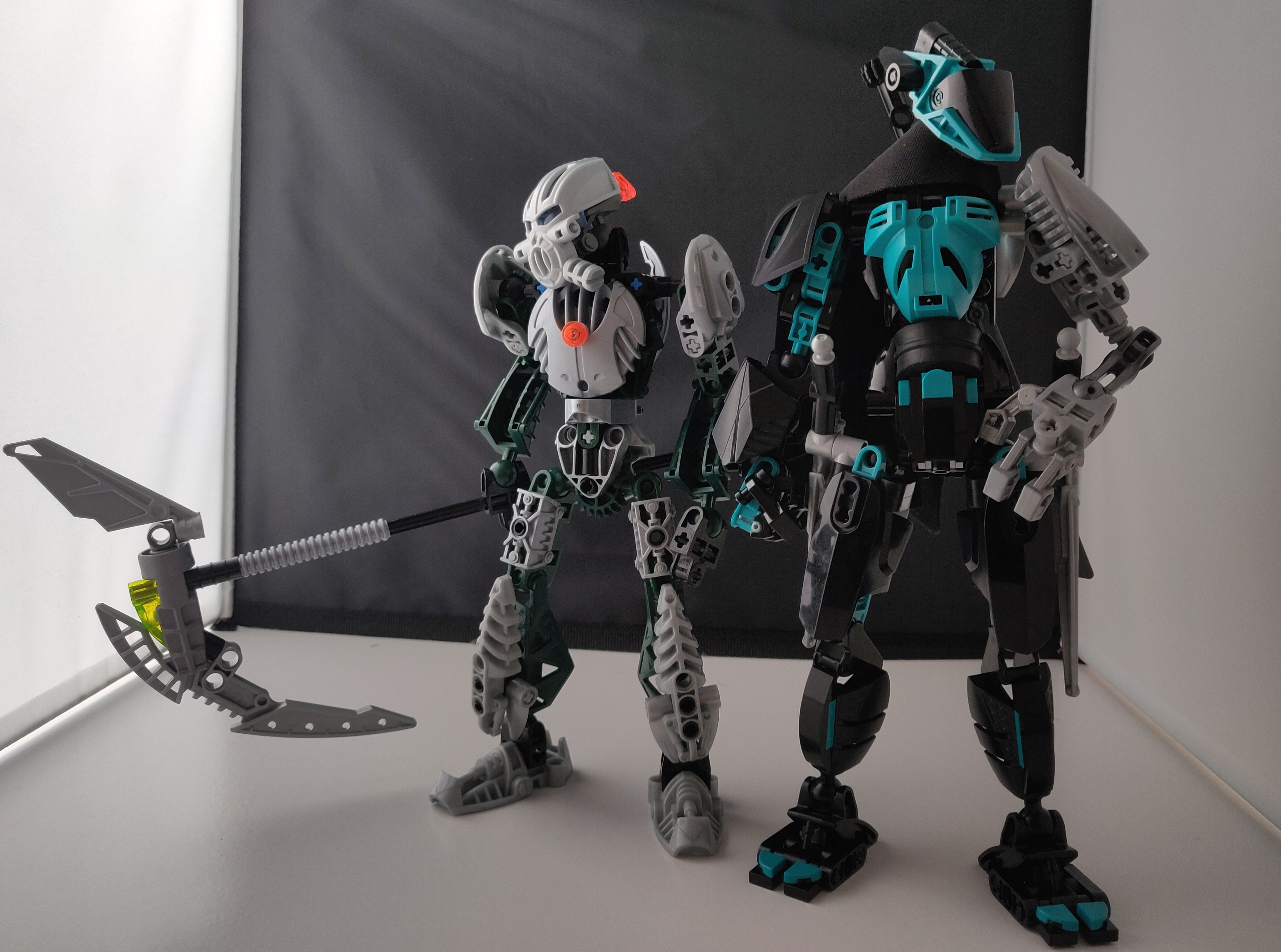 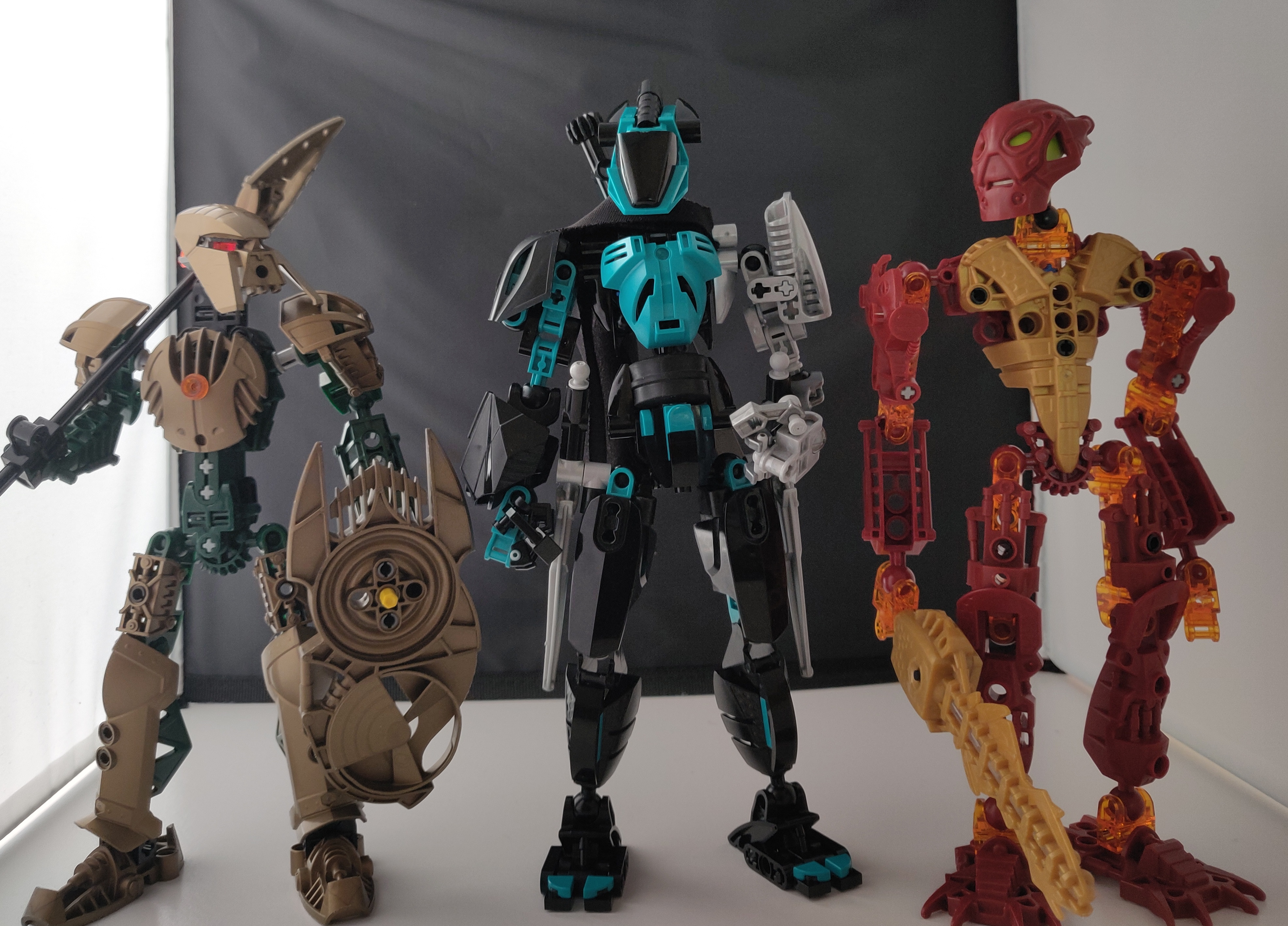 She’s about the height of an Inika build, if a little over. Unfortunately, she ended up being more to scale with my regular builds, which are about a head or so taller than an Inika. Alas. 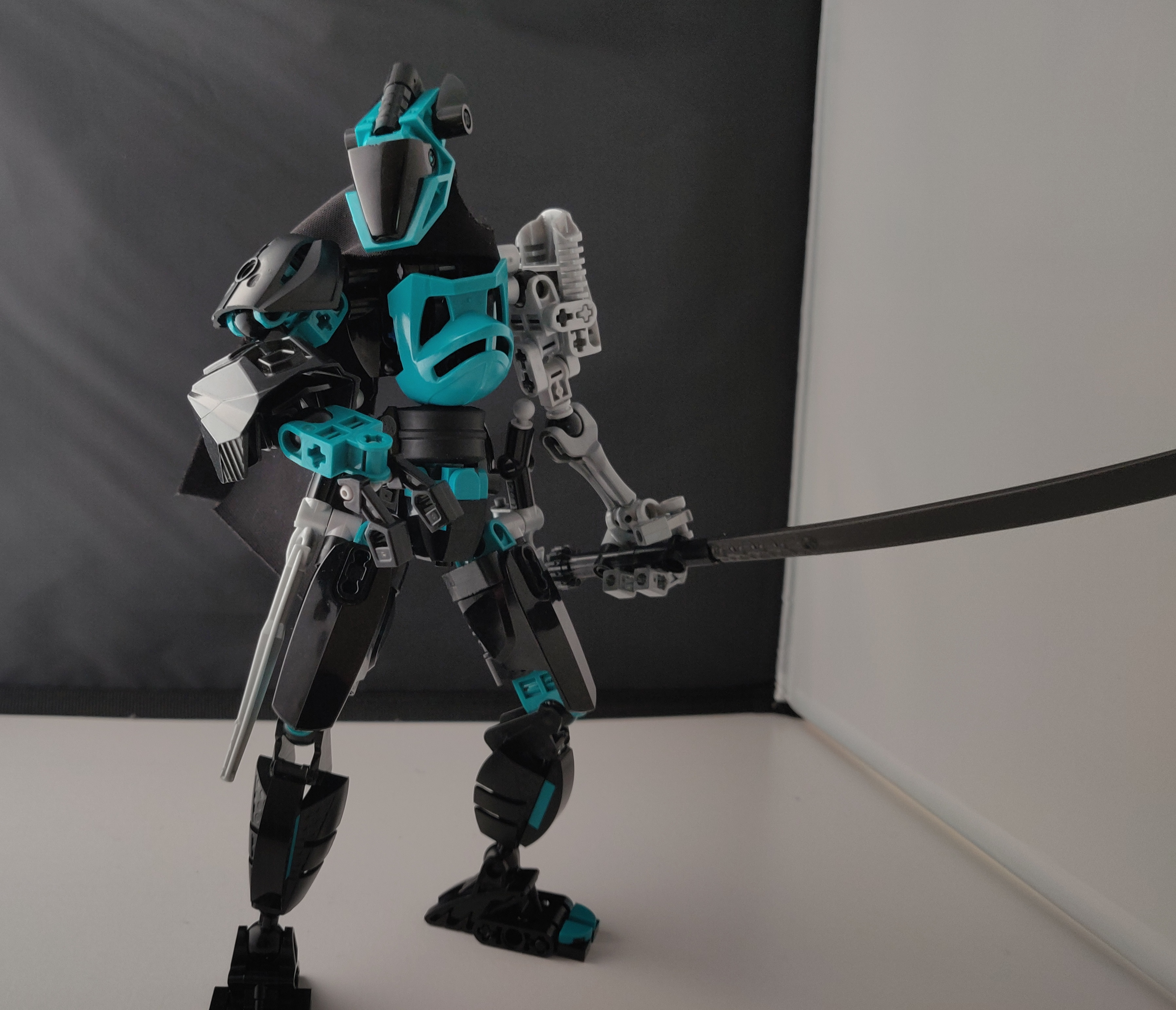 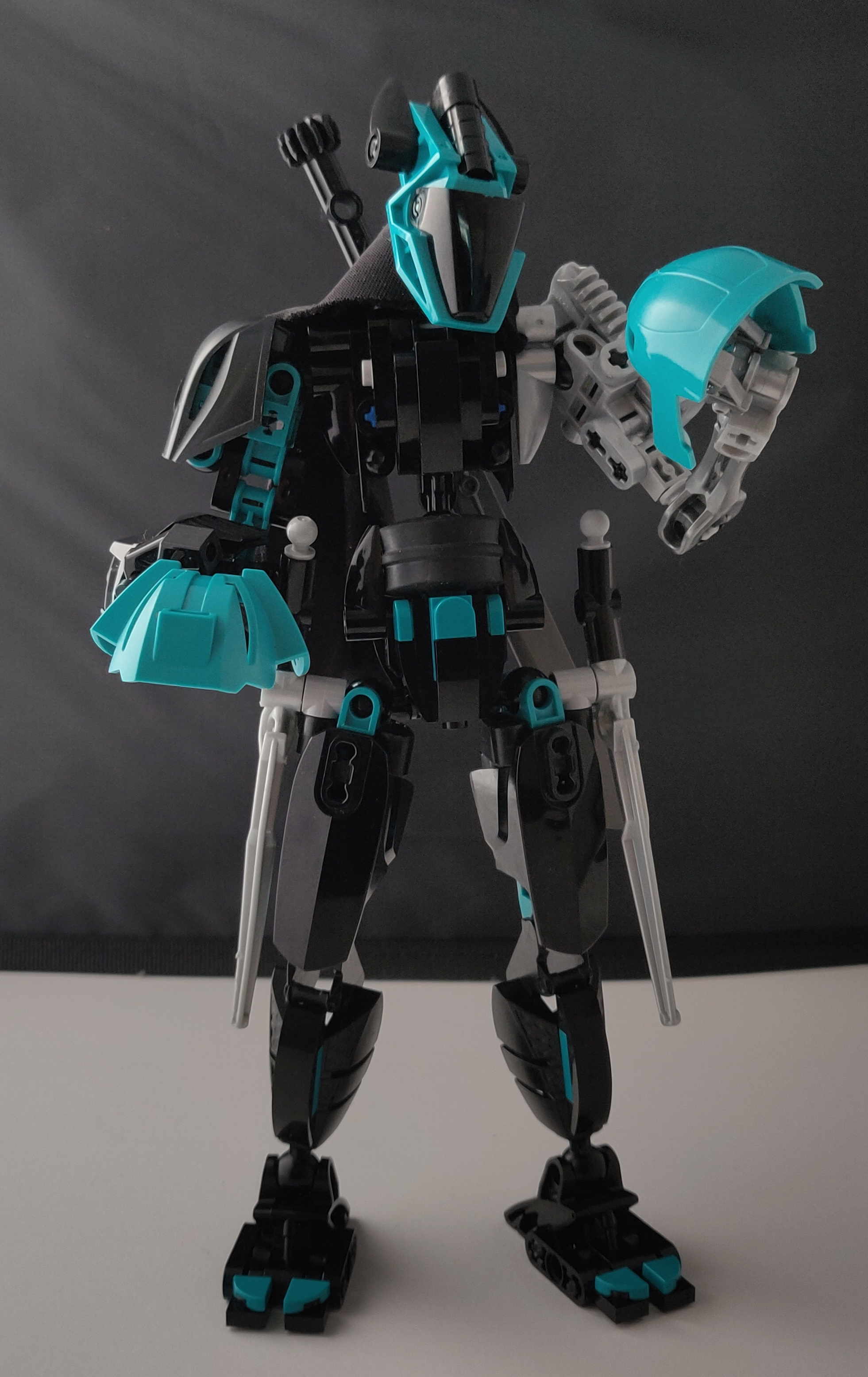 I wanted to have her use Kanohi as armor, so here’s some shots of various options.

Breakdown photos and the studio file can be found here. Initial inspiration was taken from ChineseLegolas’ Lariska. If you’ve got any constructive criticism, feel free to comment! Thanks for reading!

I really like this version. The flat feet are essential in my eyes as they are practical for parkour and are reminiscent of ninja footwear. I also like that this is not parts intensive. I hope you make it far in the contest!

looks really cool! one of the best torso’s i have ever seen!

I agree with Jerminator, the bone piece on the mecha-arm works really well. Overall a nice build but I’m not sure about the cape…

I like the use of CCBS skeltal pieces on Lariska’s mechanical arm.

You gave Nidhiki a Silver Volitak! It should be Green!!!
All jokes aside, this has a great build without looking too overly feminine.
I was never a fan of the Slizer head’s use in Lariska mocs, but trying to build a good head for Lariska is really hard, so it functions alright as a substitute.

reminiscent of ninja footwear. I also like that this is not parts intensive.

You’re totally right! I hadn’t even placed that. Low part cost was an important factor, not just for rebuilds, but also because I’m a broke college student and I don’t want to spend a hundred or two on turquoise parts.

the bone piece on the mecha-arm works really well.

Thanks! The Shinobi Prosthetic from Sekiro was the main inspiration in using that piece, and was one of the first things about the build I had set in stone.

This is fair, and I’d honestly agree with you. I’m not the best at creating cloth, and as one of the requirements for using it in the contest is that you have to make it easily reproducible, I just bit the bullet and used one of the star wars cloaks I had lying around. I wanted it to look more like a scarf, so that’s probably something I’ll work on once the contest ends.

You gave Nidhiki a Silver Volitak! It should be Green!!!

I was never a fan of the Slizer head’s use in Lariska mocs, but trying to build a good head for Lariska is really hard, so it functions alright as a substitute.

Very true. I do think the slizer head ended up becoming more outplayed than it was when I was planning her out, but that’s how it is with rare colors. I don’t think I’m going to change it myself, but I appreciate your comment nonetheless.

All in all, thanks everyone! I’m super glad to get some feedback from folks!

My problem is not availability, I just don’t think a cape works for Lariska.

Nice, the silhouette is really cool for her, the cape works with her, in my opinion at least.

Very sleek. And that mask armour is ingenious.

I really like this interpretation! The sandal-like feet are a great touch, as is the masks-as-chestplate feature!