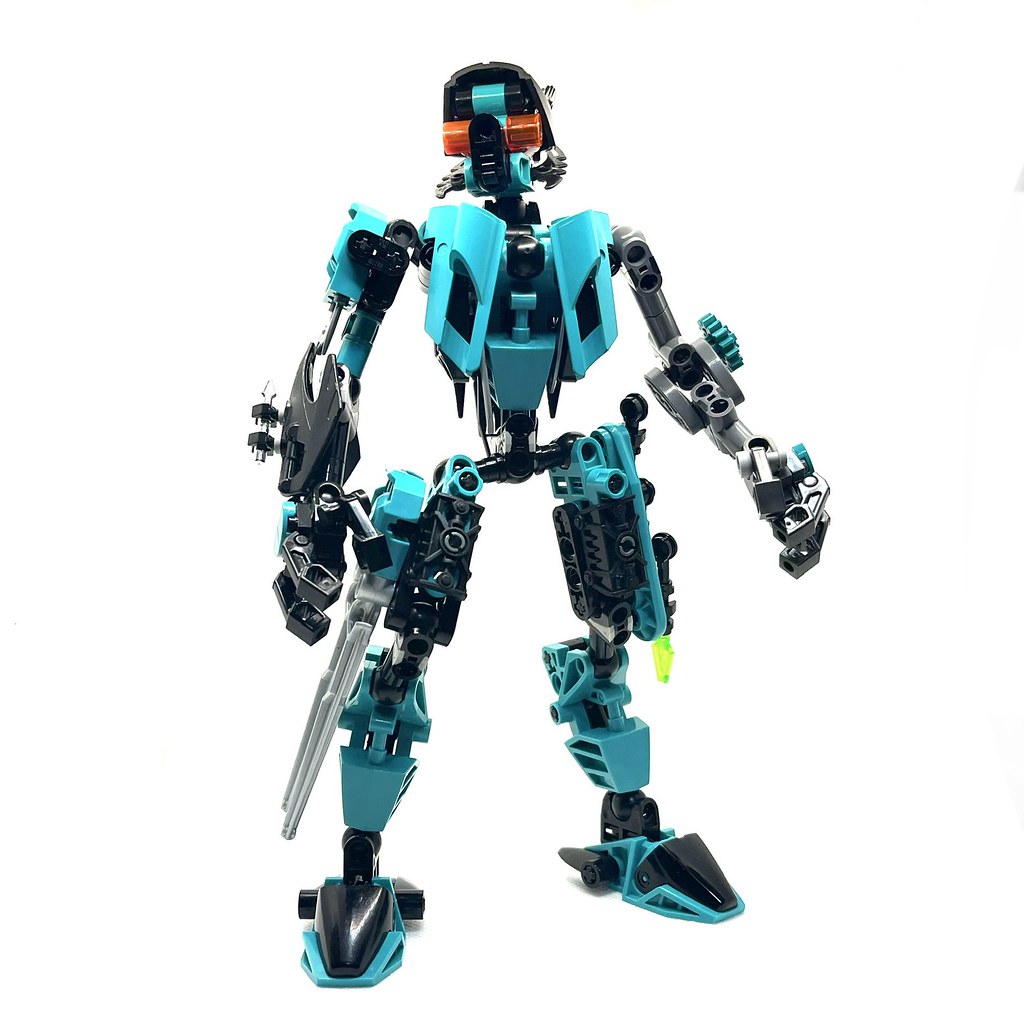 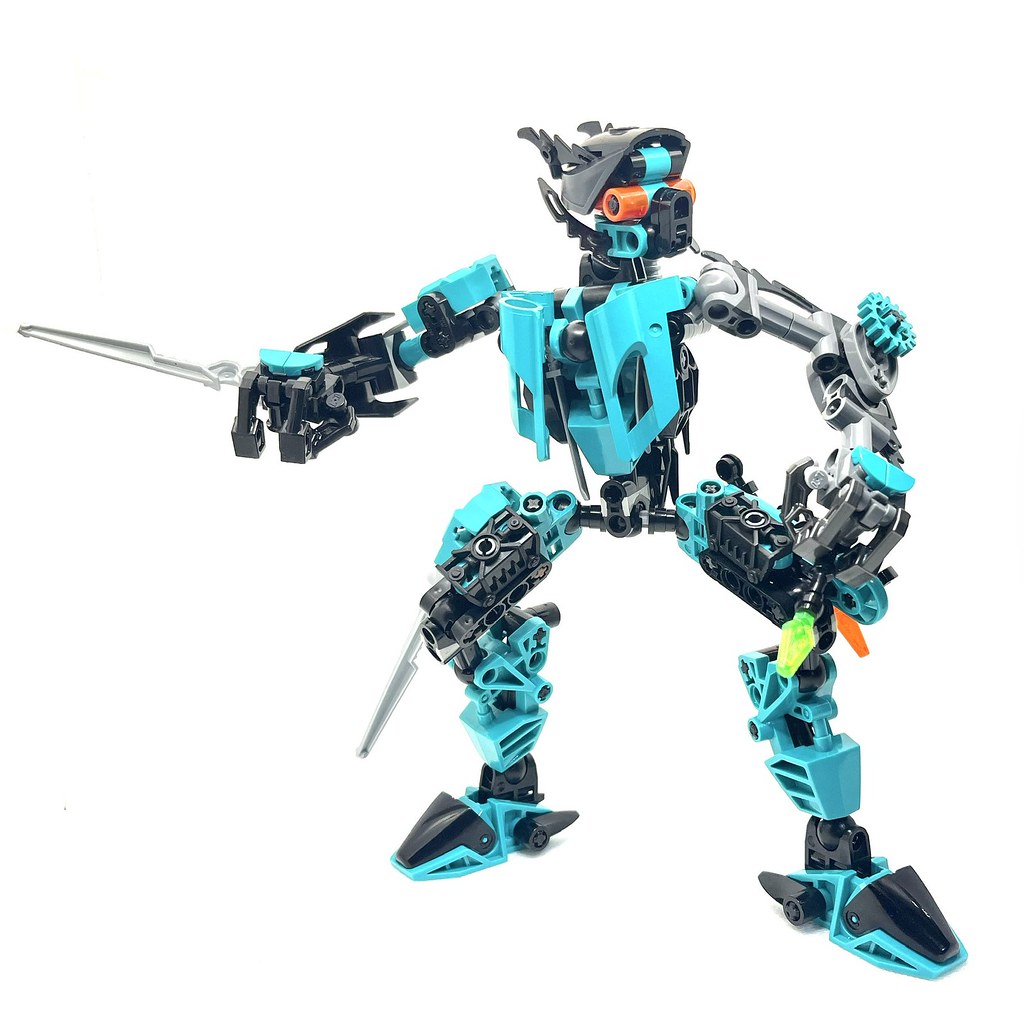 Ive been working on her since before the TTV canon contests began and am glad to finally show her off in all her stab-happy glory!
well, I have shared her on a couple other sites but this is her ‘official’ introduction.
One thing I’ve tried for with each of these contests I’ve been able to enter is a completely unique custom torso. I took some inspiration from Rayla’s assassin outfit on ‘The Dragon Prince’ for her ‘jacket’. Though Lariska originally had a pair of longer coat-tails, they were too stiff and just got in the way of her legs
of course since this model is for a specific character contest there was a particular brief which had to be met: 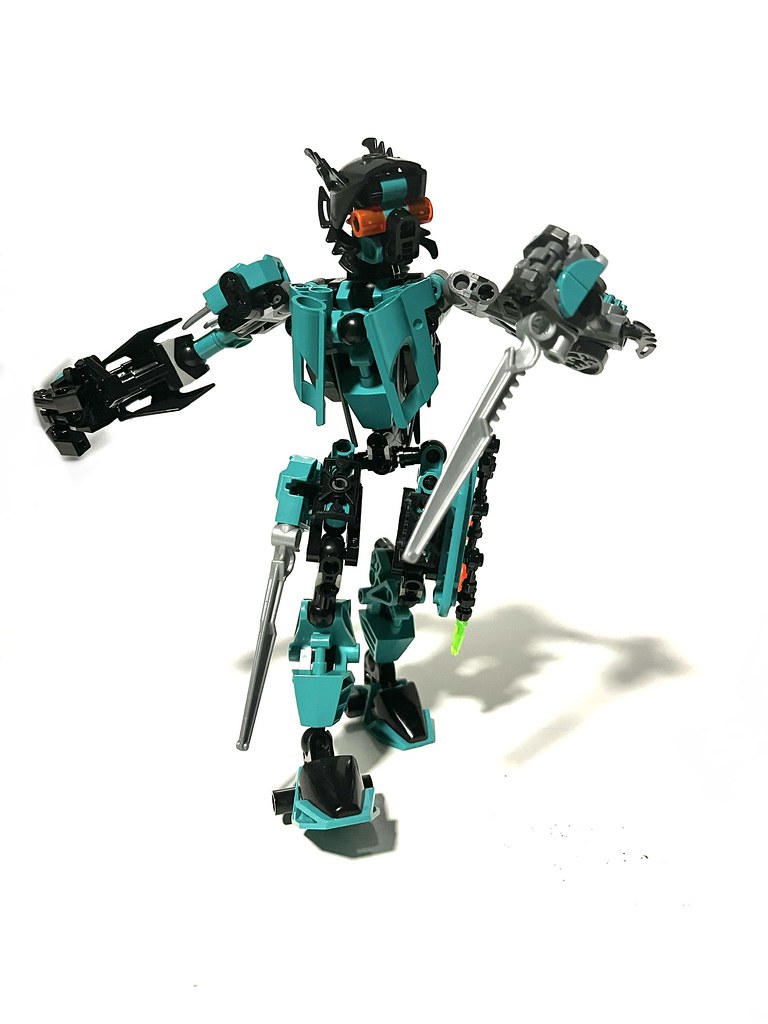 lets cut straight to the meat of it, shall we? 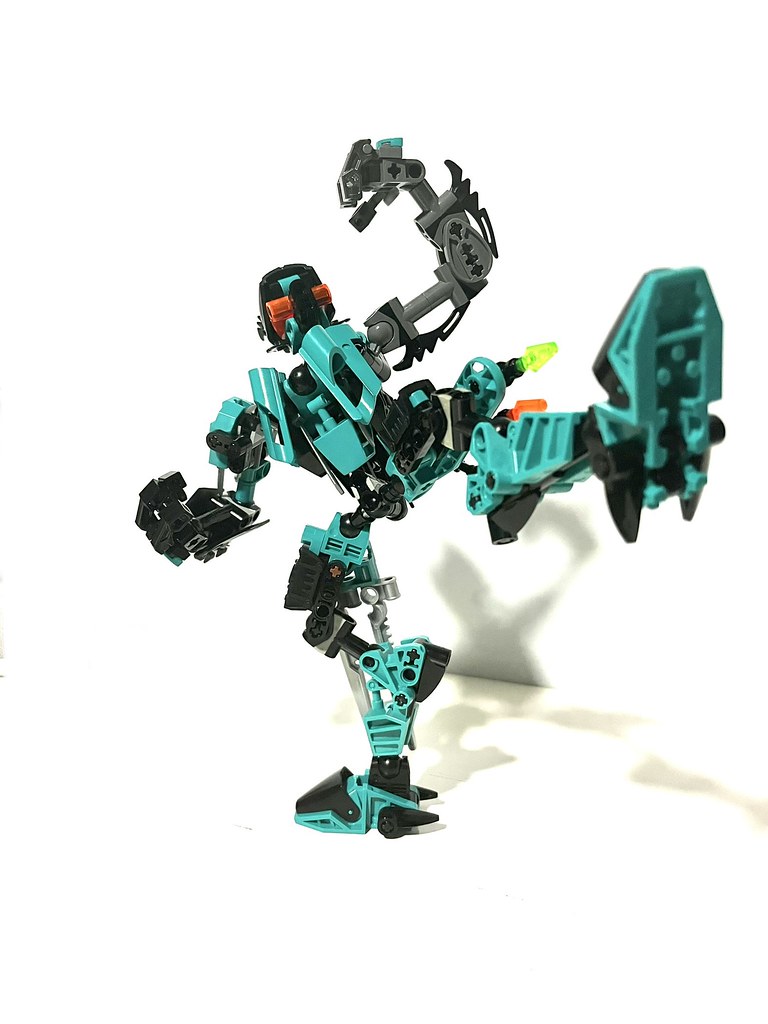 I spent a ridiculously long time on the leg design, trying to slim them down without losing too much colour of the scabbards. In the end I completely replaced the lower legs with a digitgrade design that actually gave the figure better balance. Flat feet was a must for Lariska and I wanted to try and emulate ballet shoes. Not sure if I quite got that but im satisfied with the design either way. 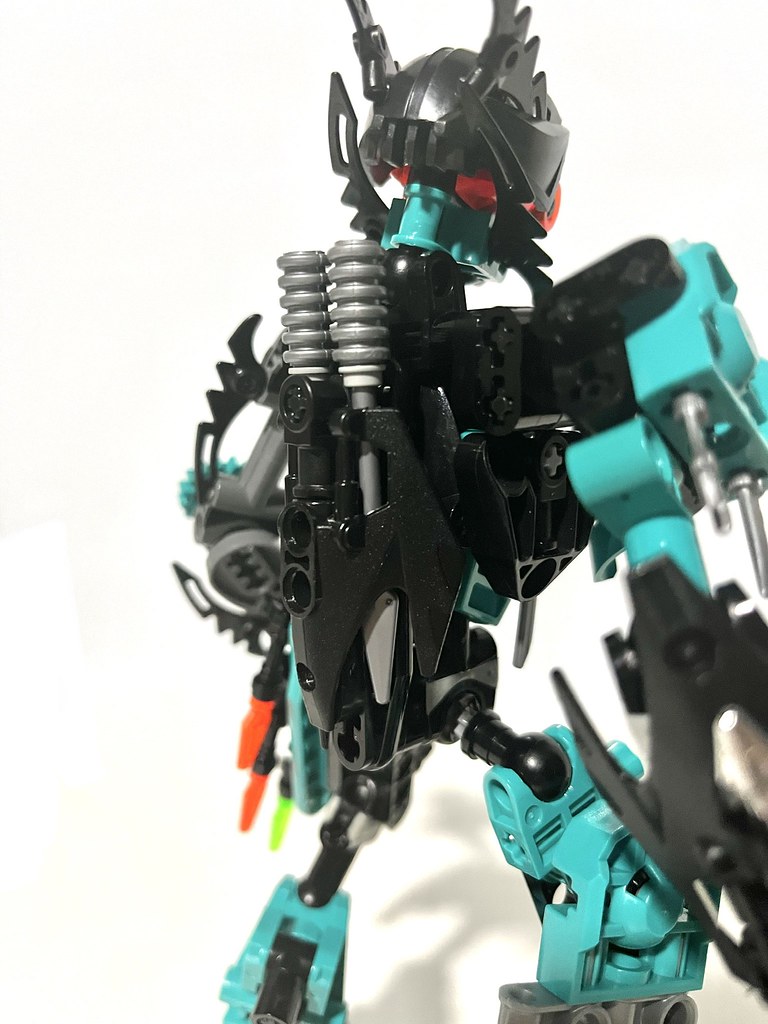 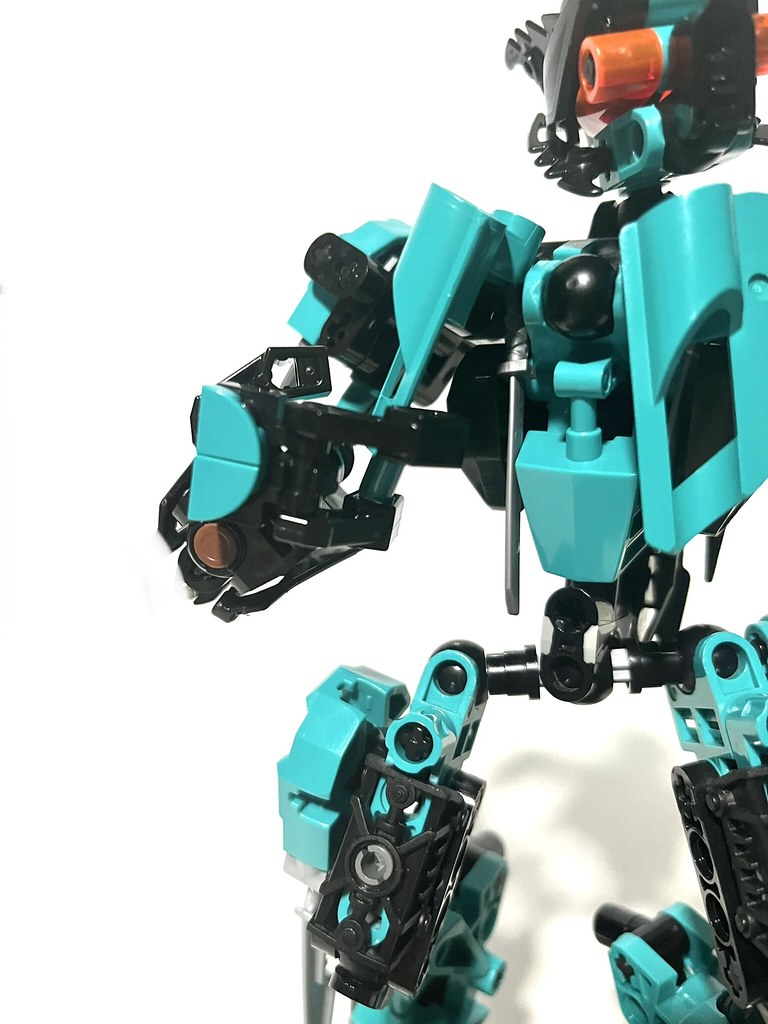 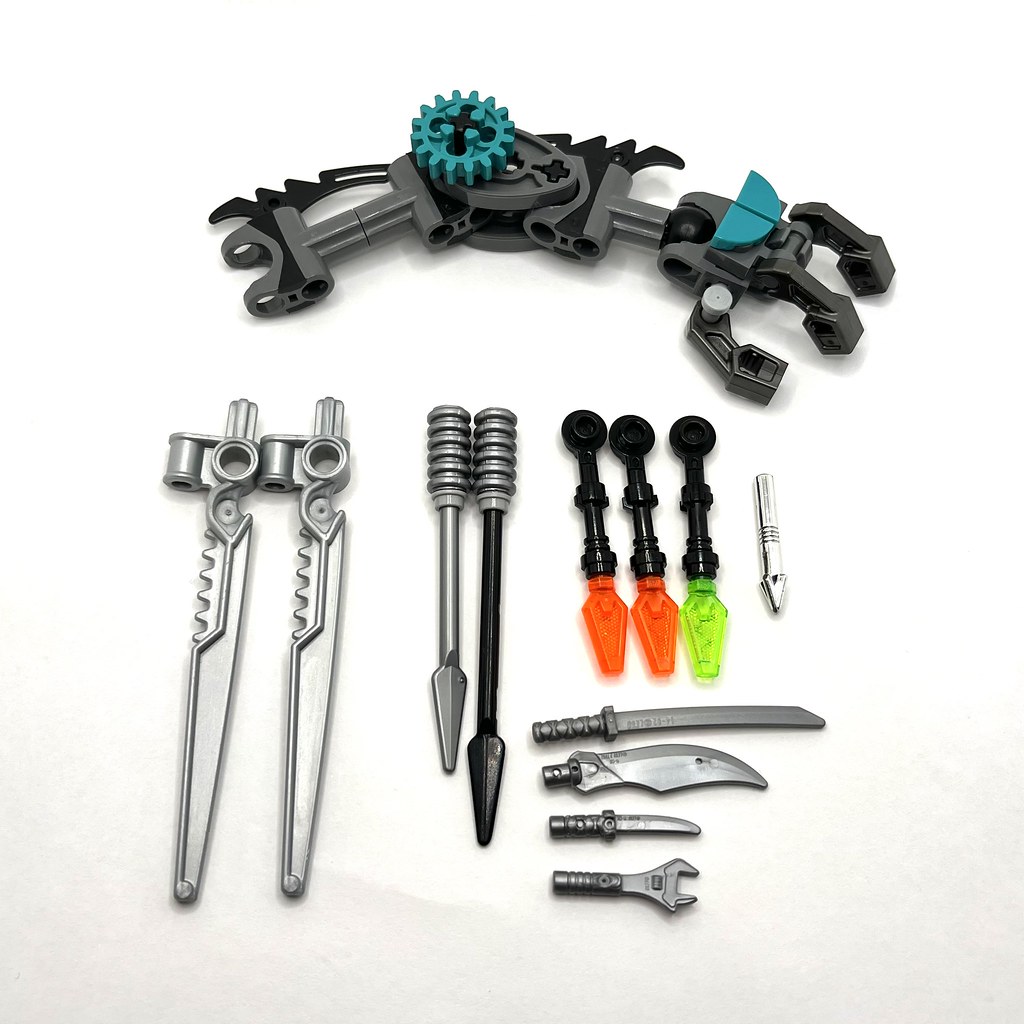 I tried to get as many blades onto her as possible and ended up with a round dozen, including the wrench.
Since Lariska specializes in stealth operations, her prosthetic arm needed to be something dull colour-wise. Dull but not boring, so I went for a simple black/grey build with some teal accents and, you guessed it, more blades! And yes, the gear function works. Ill try to link a video later. 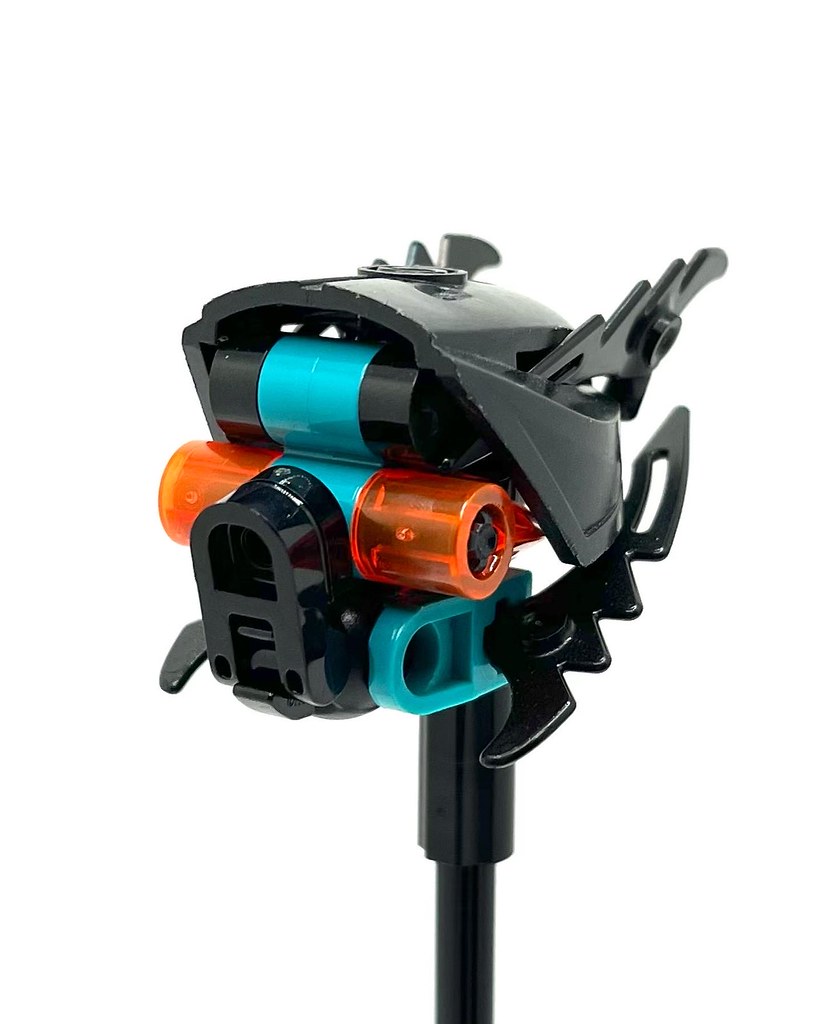 Something I think a lot of people overlook is that, in BoaDH Nidhiki expresses absolute disgust at Roodaka’s visage yet expresses absolutely no issues with Lariska’s appearance. This seems pretty solid narrative evidence that the two have significantly different facial features.

I went for forward facing eyes and a spiked/bladed helmet. While she is mask compatible, it requires replacing the ‘mouth’ piece
and so far Ive only tested it with a couple of mate-era masks. 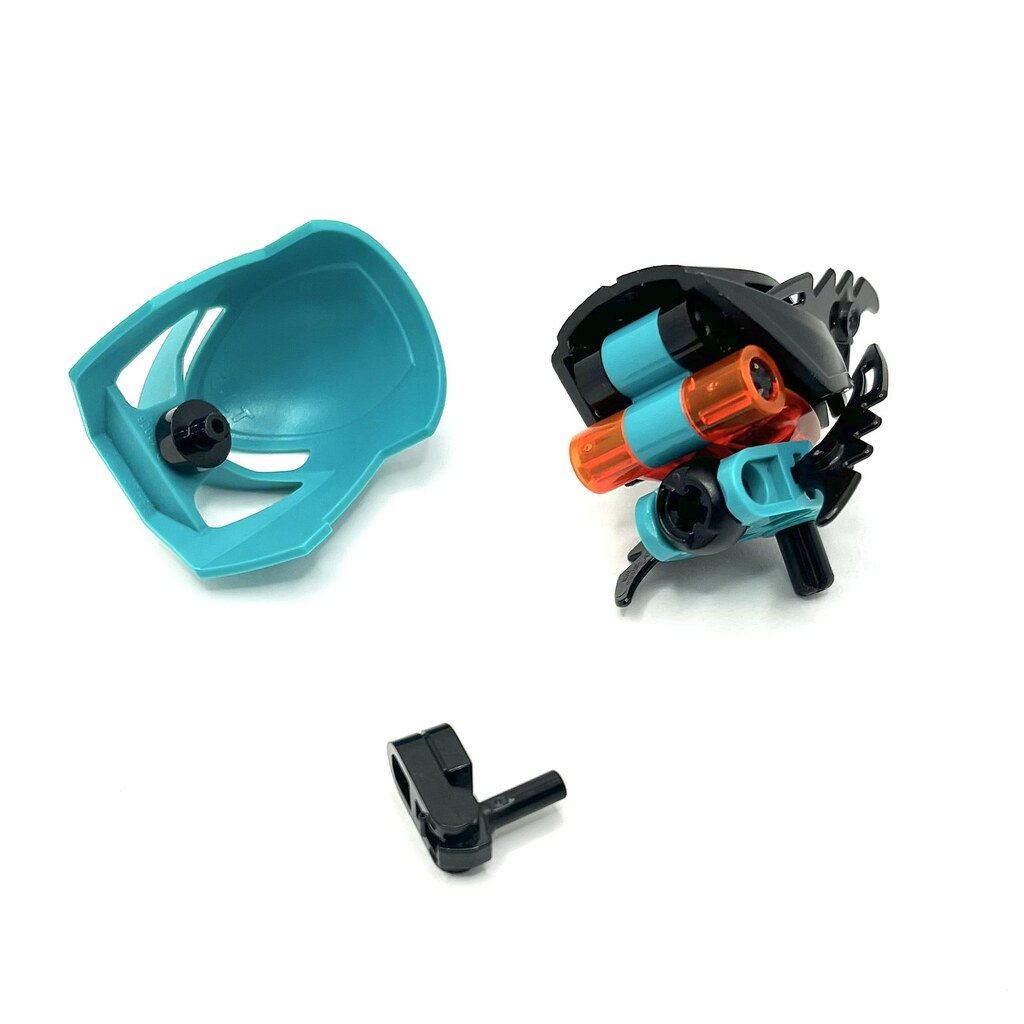 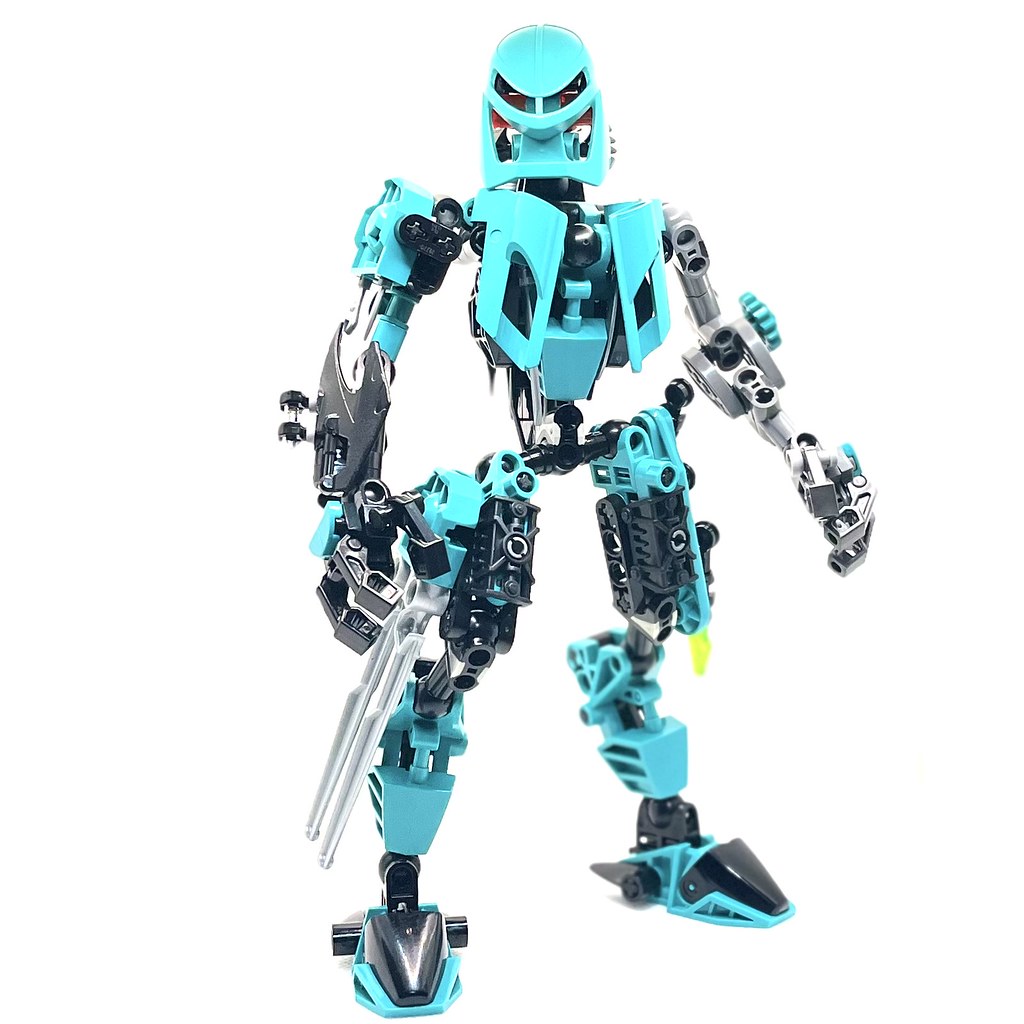 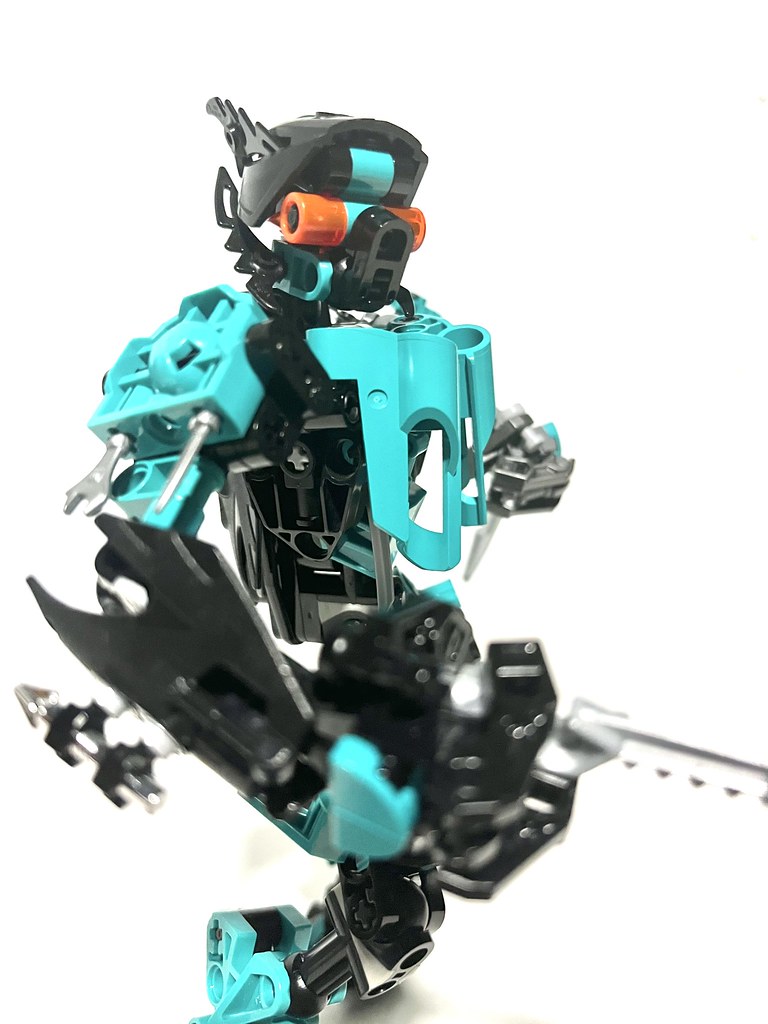 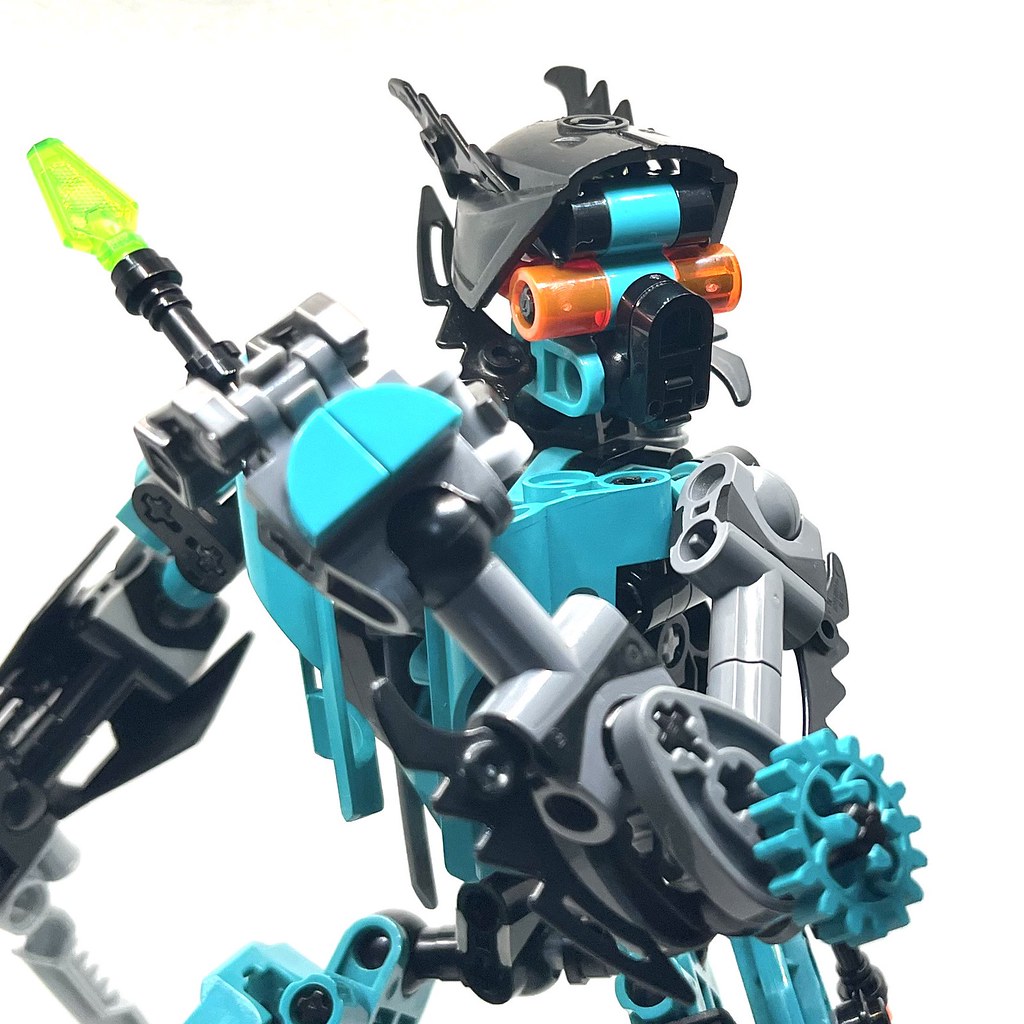 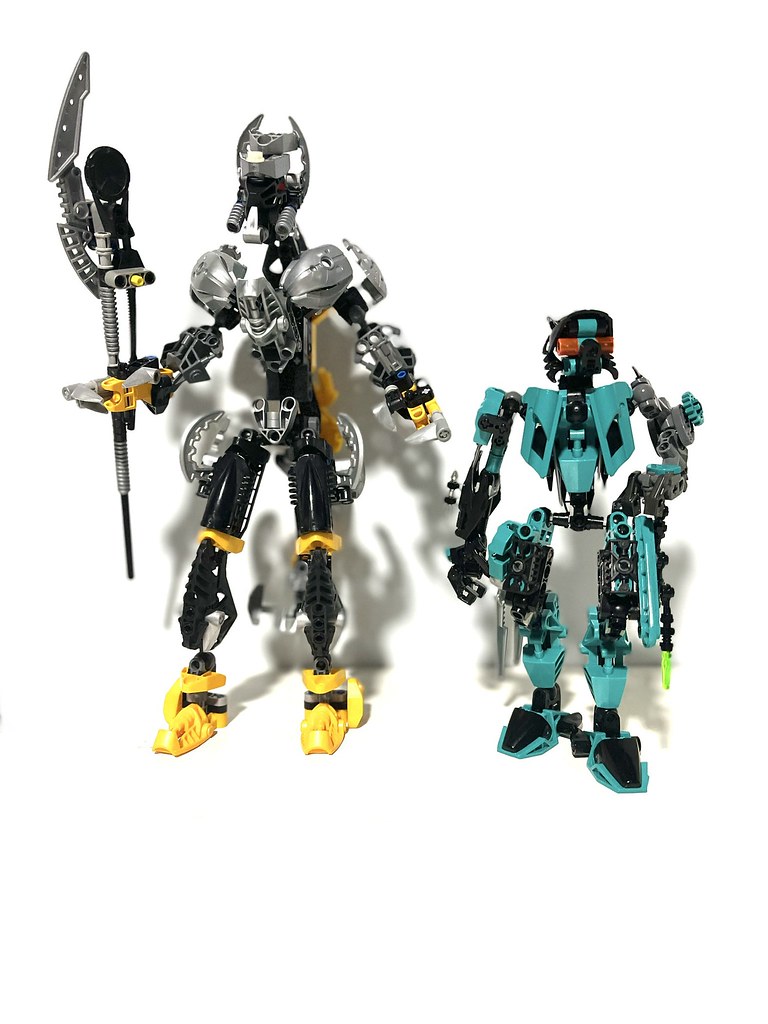 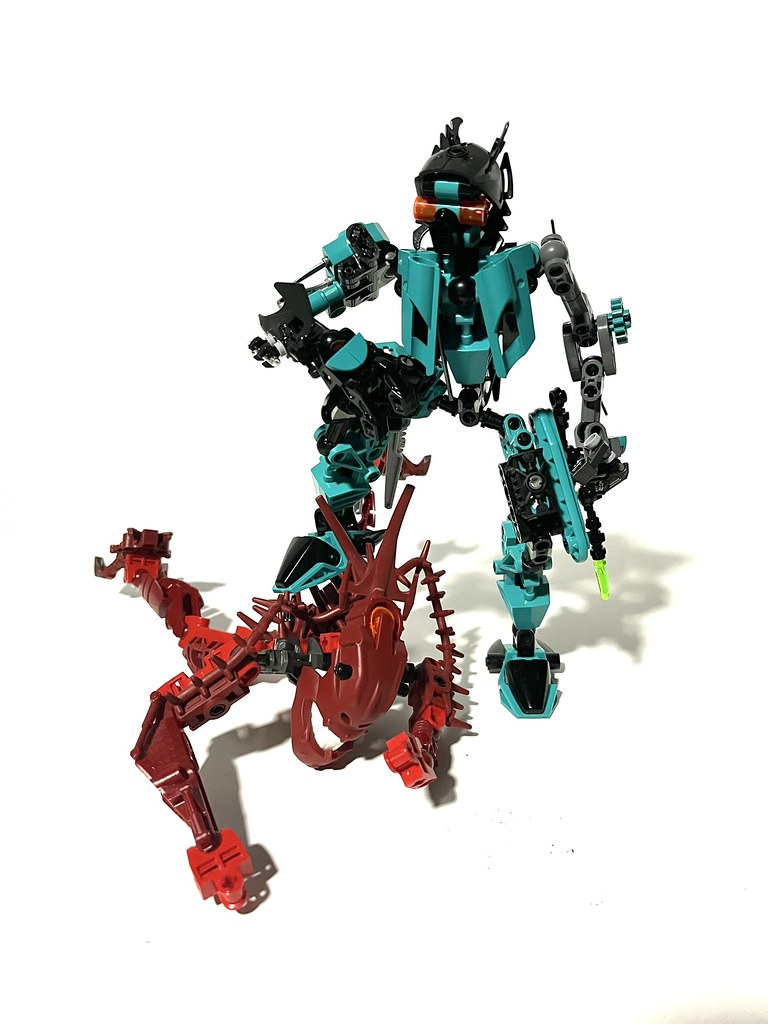 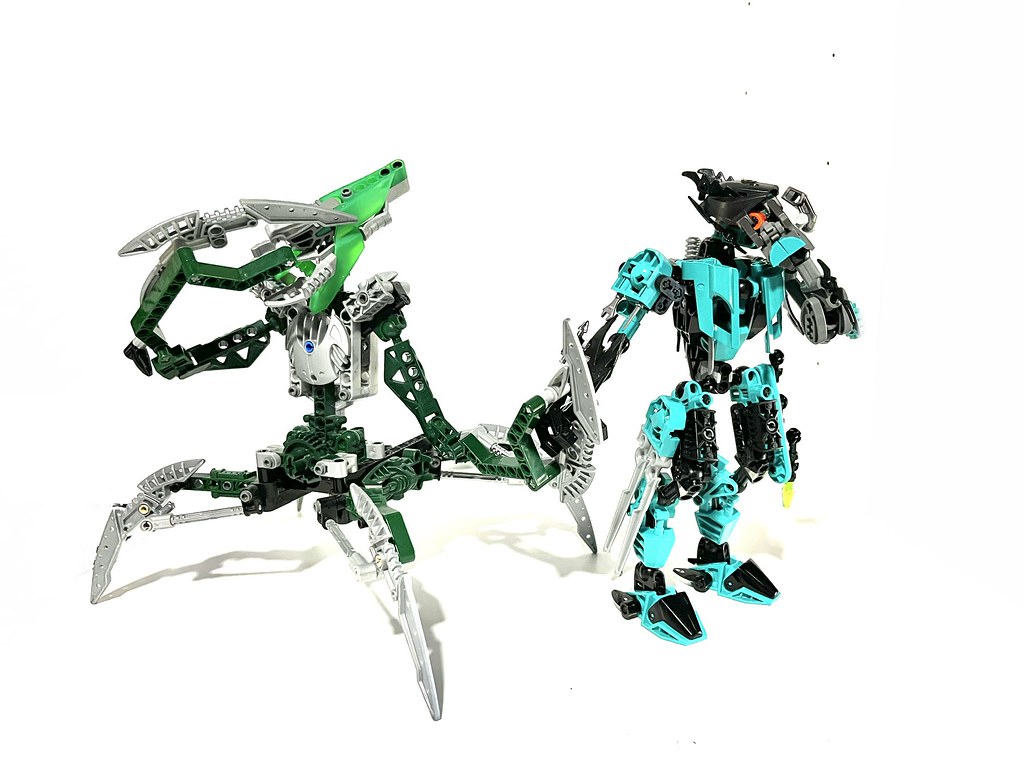 Any critiques or suggestions before I submit this to the Duckbricks contest are more than welcome. : )
Thanks for reading.

Better late then never, here links to videos of her in motion on my instagram.