Lariska, the Right Hand of The Shadowed One (My entry for DuckBricks' Fanon Contest)

Gathered friends, I present you my interpretation of the Lariska. 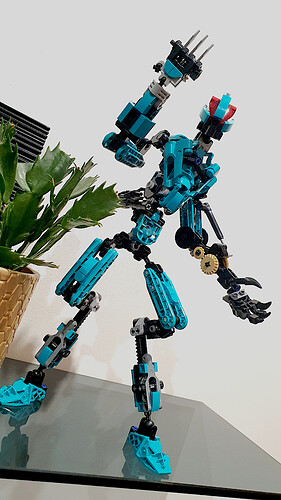 As most of us knows, Lariska is Greg Farshtey’s favorite Dark Hunter, so I really wanted to design this character with respect. At the beginning, I decided that I want the whole build to reflect the vintage vibe of the first years of BIONICLE. Lariska is not some ancient being like Artakha. She’s a mercenary, so she shouldn’t look too different from other „heroes” around her. At the same time, I made sure that my MOC is as faithful to Greg’s descriptions as possible by using the correct color scheme and taking into account details such as the fact that the Lariska race was capable of wearing Kanohi masks. 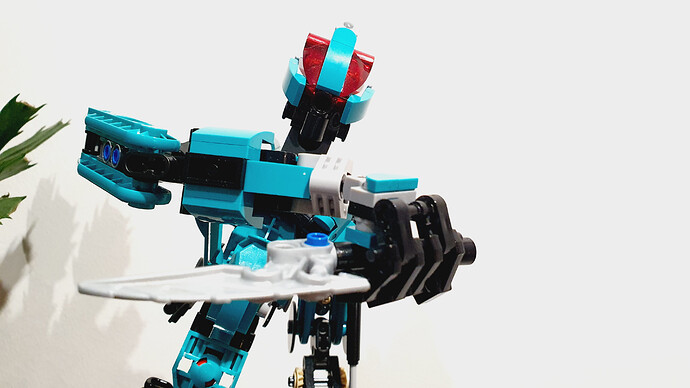 Contrary to appearances, the tiniest detail- the head- took the most time for me. I didn’t wanted my Lariska to look like a Vortixx. So I rejected the fan’s repeated motive of giving her a Vahki head. Instead, I decided to use Mixel joints and system elements. I also wanted to make Lariska’s head look female enough to make others able to guess hers gender just by looking on her, even if someone is not into BIONICLE lore. To this end, I rounded her face, highlighted her large eyes and made a small detail in the form of a ponytail at the back of her head.

Bowing to The Shadowed One: 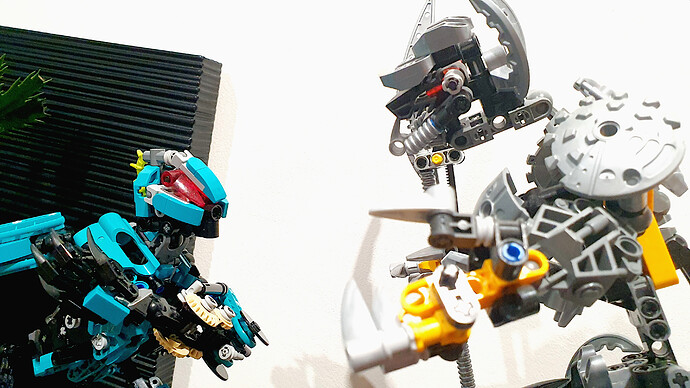 In the case of the torso, I had two main goals. Firstly, as Lariska likes acrobatics, my MOC had to be able to bend its torso at the waist, but still having a slim figure. So I constructed a torso with an additional point of articulation. At the same time, as a secondary goal, I decided to design the armor so to give it a predatory appearance. So I used old technical panels to model something like a Rahi’s head, where the lower part of the torso is the lower jaw of the head, the holes in the panels are the eyes, and the system element protruding from the Slizer’s head is the nose. Enclosing Lariska’s back, I also added leads that allow you to attach a scabbard to the protosteel daggers.

She can look really menacing: 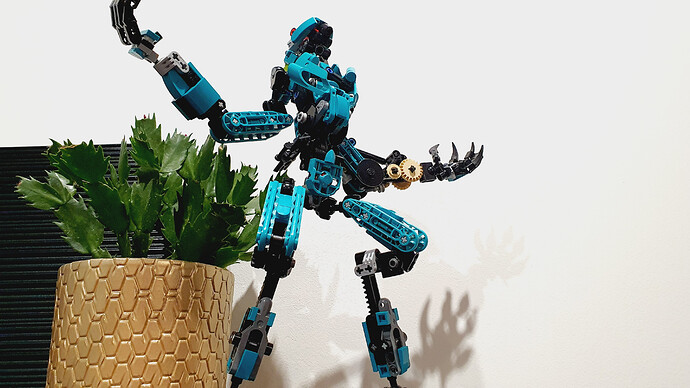 The part I had the most fun with was definitely the legs. I wanted them to be something unique, something what will decorate the entire MOC. After all, it was thanks to them that Lariska was able to jump and perform all these acrobatics. I considered human-like legs, but the result was not unique enough. So I went a step further and modified my knees so that Lariska’s legs resembled those of a cricket - an insect that everyone associates with jumping. I used many unconventional solutions to design the lower legs, which resulted in the creation of probably the most interesting looking legs that I have ever created in my MOCer’s career. I hesitated a bit when I was projecting her feets, because I was afraid that the Slizer heads would be too small and would not provide the MOC with enough stability to make it able to stand on its own, and again too large feet would spoil the effect I achieved with the design of the upper and lower legs. Ultimately, however, it turned out that the MOC is stable and does not require building larger feets.

She can stand on one leg: 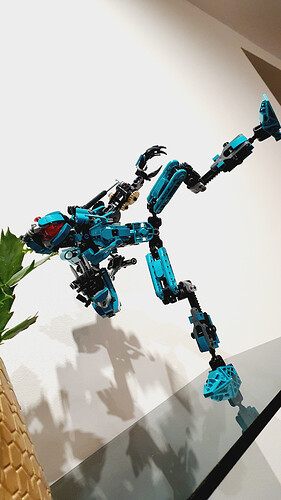 When I was designing Lariska’s right hand, I wanted it to be encased as precisely as possible, to make it contrast with the mechanical arm that I will design later. Therefore, I used the most system components there. Perhaps a similar effect could be achieved with Technic elements, but I didn’t wanted the right hand to be too black as it would not contrast enough with the left hand. Fortunately, LEGO offers many small elements in the dark teal color. I also made sure that Lariska’s hand had five fingers, so she can hold throwing knives between her fingers, as if she was threatening her victims by presenting them this way.

She can hold throwing knifes in left hand too: 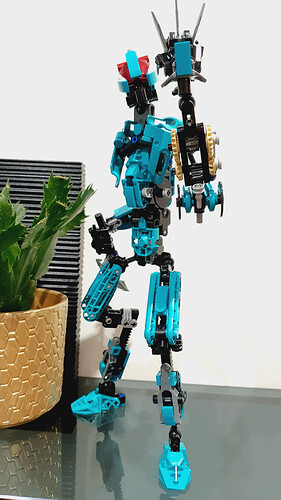 Finally, all that was left to design was a mechanical arm. I knew that the key to show its robotic nature was the use of gears and pistons. It had to be a bit steampunk. But I also wanted it to look threatening. After all, Lariska was someone who the other Dark Hunters were affraid of. So I used the black skeleton torso as a base for her palm, and crowned her fingers with sharp claws.

She can stand on one hand (but you cannot use worn balljoints): 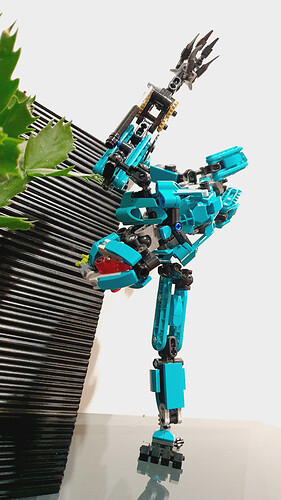 The entire MOC is surprisingly stable, despite the large height and the absence of double balljoints in the legs. The figure can take on a whole lot of poses, thanks to the huge number of points of articulation, its design is consistent with the descriptions from Greg, it looks good next to other Dark Hunters and offers the possibility of wearing all the Turaga, Toa Mata and Toa Nuva Kanohi masks, although if you want to use Hau or KauKau, you’ll need to put an additional stud between mask and the head as those two Kanohi are too narrow to fit on Lariska’s face. 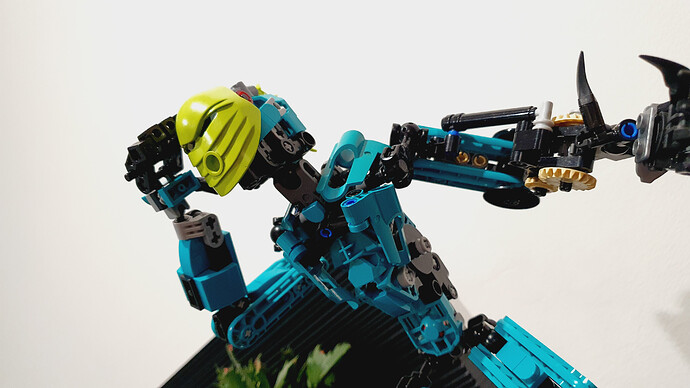 And yeah, I know that Lariska was using twin daggers, but I did not wanted to cover her torso with the second scabbard, so my MOC has only one. But I think, it’s not too hard to make identical one on the left, right? 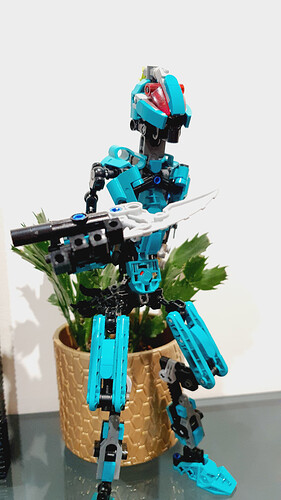 Below I am attaching a few photos showing how the individual parts of MOC are built and a video presenting it from all sides. In some time, I will also try to upload a step-by-step video on how to build my Lariska, just like I did in the previous two competitions, but you’ll have to wait a bit for this video

I hope you like my Lariska project and that she will at least reach the semi-finals of the voting. Good luck to all of you who also decided to take part in the contest

Front, side and back photos: 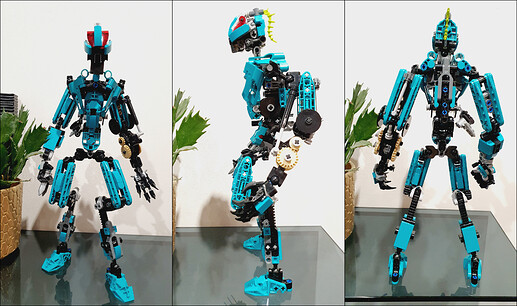 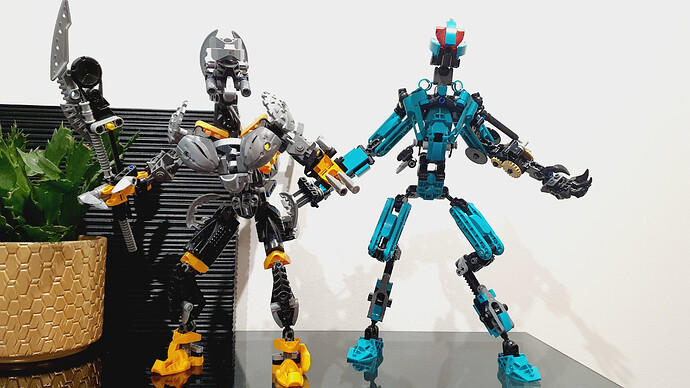 Update 1:
My Lariska is a real-life MOC and it was hard to make an epic photo of her because of lack of proper backgrounds so I’ve made this simple art 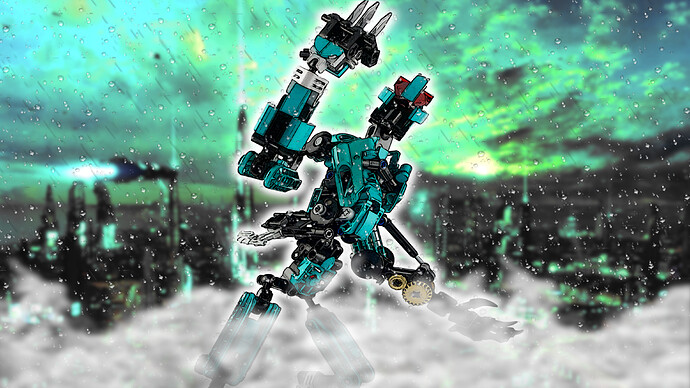 Love it! The limbs are a lil’ lanky for my taste, but that’s more a of a personal preference.

Even though this was not what I had expected as a Lariska design, this is absolutely amazing! It truly captures her acrobatic abilities, as well as just looking amazing!

I’m glad to hear that ^^ To make her agile and able to make all those dynamic poses, I was forced to modify some parts of her body. She had different shoulders was a bit shorter, but for example without grey piece between legs, she was hard to pose because of not enough friction. It’s hard to have both good look and articulation

Maybe there will be other great Lariska MOCs in the contest but I’m sure that almost none of them will be able to stand on one arm like yours one. Great job, man, you have my subscription

And, of course, I’ll vote for your Lariska, she really deserves to be canonized!