So I’m really going ham on Bricklink Studio lately, with the ability to put any piece in any colour, which I think LDD had heavy restrictions on back when I tried it a few years ago. The ability to model and insert your own custom parts, or canon parts missing from the library is also something LDD couldn’t do.

One such use for this is Lariska, whose “Blue Green” colouration meant you had to either go back to old technic to find teal pieces, or build something blue and green, (which is not the same thing). But now, You can build with the full range of Bionicle parts, and make any of them teal any time you want, which means the Lariska I imagined years ago can finally exist. 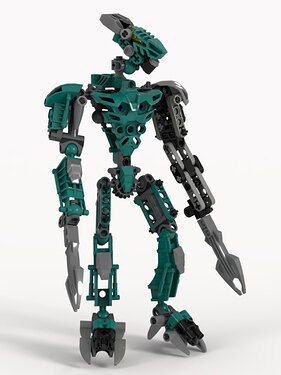 Lariska’s first appearance was in 2006, so I only used parts which existed in 2006. In fact, the only 2006 part is the open ball joint from the Toa Inika. Otherwise, she’s styled to look like something which could exist in 2005, like most of the Dark Hunters are.

This is based on a real MOC i built back then, but I always knew I’d have to just imagine the teal. I also prefer Panrahk staffs for the daggers, instead of Guurahk, but I couldn’t find a 3D model of them to import.

She’s got hordika parts, and toa metru stuff, very 2004/2005. If she resembles Roodaka, That’s not entirely a coincidence. That’s the other murder lady from 2005 who was around to stick in your head when Lariska had no image. Nidhiki, Krekka, the Shadowed One, Charger, Conjurer, Spinner, Tracker, Vengeance, and Voporak also use the vahki head. It’s kind of a Dark Hunter signature.

I know we’re eventually having a contest eventually , but it’s probably more than a year away, and I wanted to share what I made now. This is not an entry.

There are a bunch of pieces here that don’t appear in Bricklink Studio’s library. The hordika legs, the vakhi head, and the nuva shoulder. They’re from a package posted to reddit by u/SwampKryakwa.

Brickshelf Gallery containing some earlier drafts. The ones numbered in the 100s are the final model. 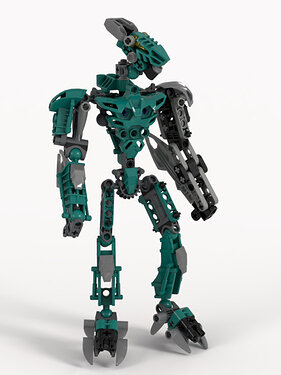 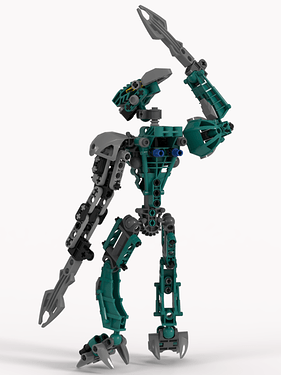 I do especially like how you’ve distinguished the mechanical arm, not just with colour but with structure. Many Lariska MoC’s I’ve seen don’t do that.

The use of 2005/2006 parts here is really nice, and I like this shape and head design for Lariska. Nice work!