Welcome back to Archivist Reviews, the topic where I descend into the archives of my channel, pull a crappy review from its statis tube and re look at the set reviewed there. Today I will be going over the Bohrok of Stone itself, Pahrak. 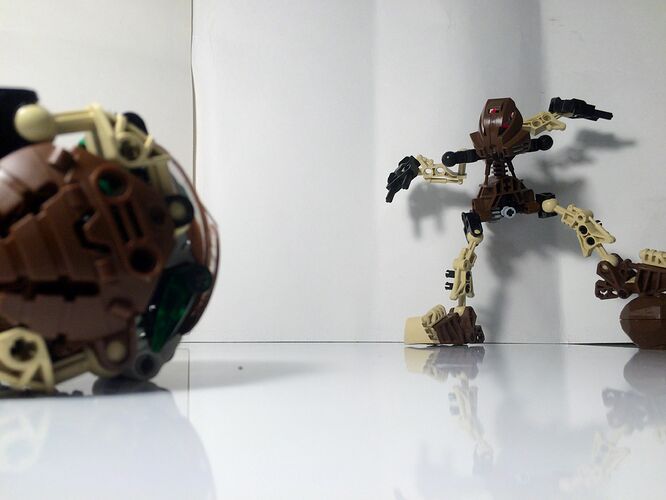 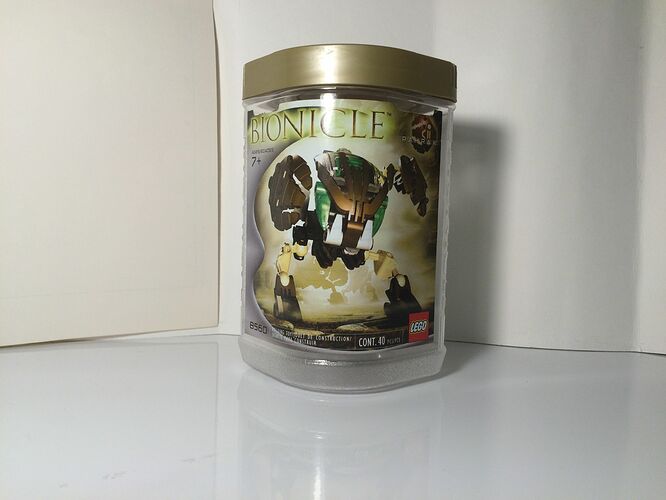 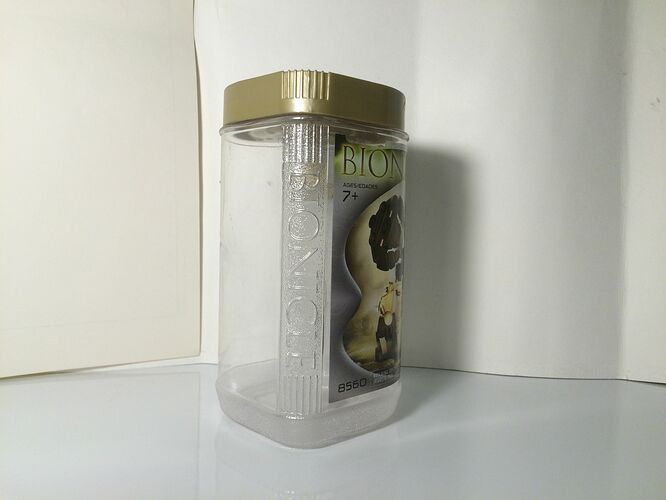 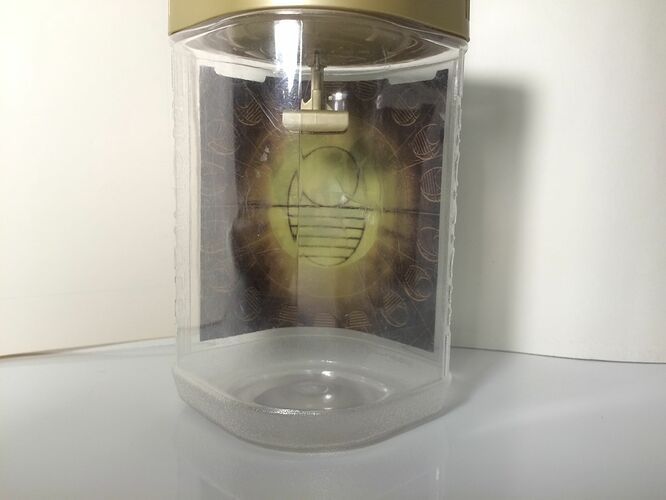 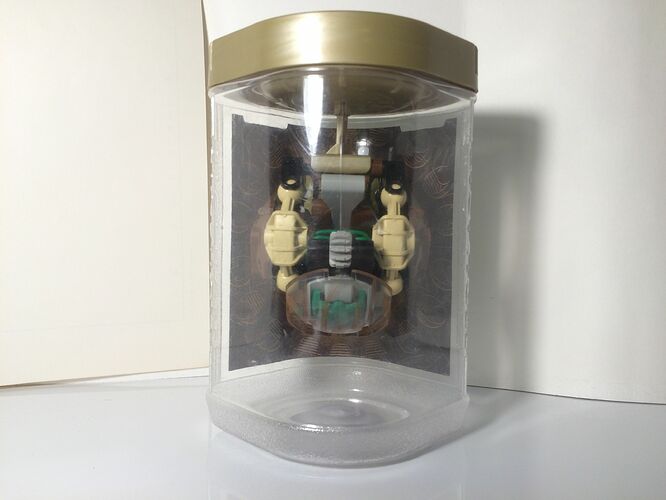 Simply put, the canisters of the Bohrok are by far superior to any released during G1, and for one single reason, their storage and interaction with the sets. Upon removing the back sticker the canister turns into a cocoon for your Bohrok, unveiling a cool picture of the swarms symbol inside and a clip hanging from the top, which can be used to attach your Bohrok in their ball mode. Not only does this make for a convenient storage, but it makes reenacting the story a lot more fun. Not to mention, if you have more than six canisters, they can come together and make the Bohrok nest. 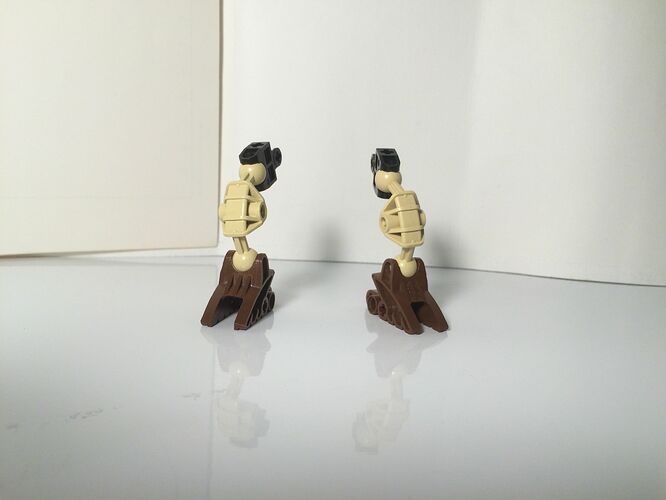 The construction of the legs is pretty self explanatory, and you probably wouldn’t need the instructions to build them, just add the limbs to the feet, attach the hand pieces, done. While the legs themselves are nothing spectacular on their own, their overall look isn’t terrible to say the least. As a matter of fact, the rather stocky proportions of the legs does go nicely with the pudgy look of the torso. 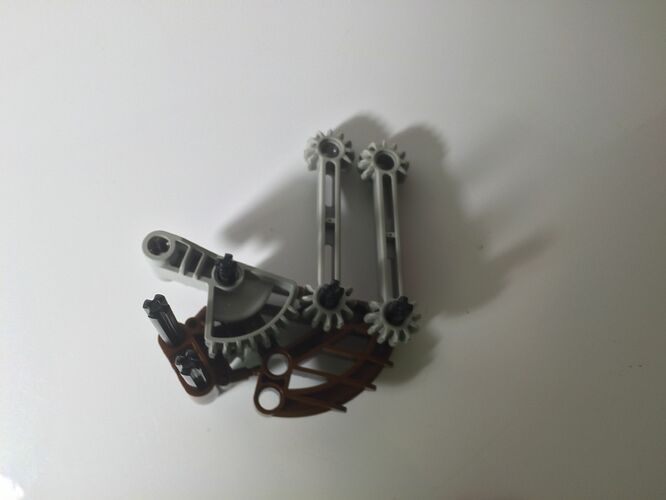 The real star of the show when building this guy is the torso and head, as they are more heavily engineered, with a greater focus on trying to create an intricate function. Despite this focus on function though, the torso is balanced out with a solid form, as the feature is mostly compact and configured subtly rather than being open ended and exposed for the world to see. 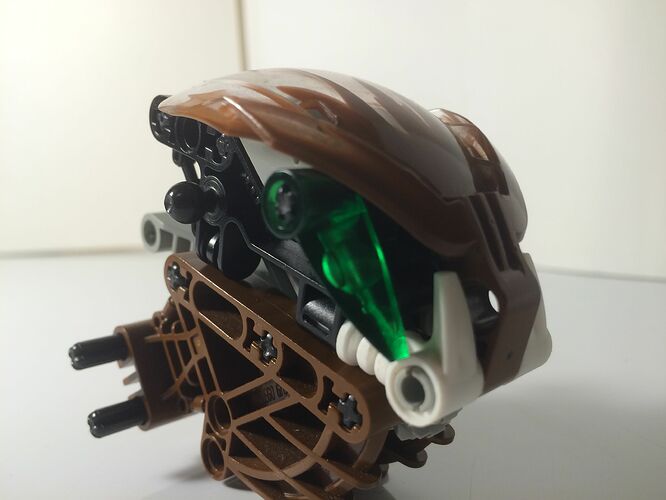 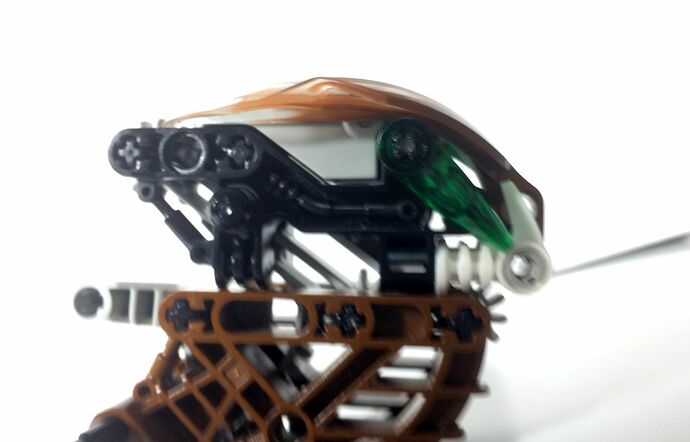 The head also has a lot of thought put into it what with how the design team was able to create this very alien looking face. 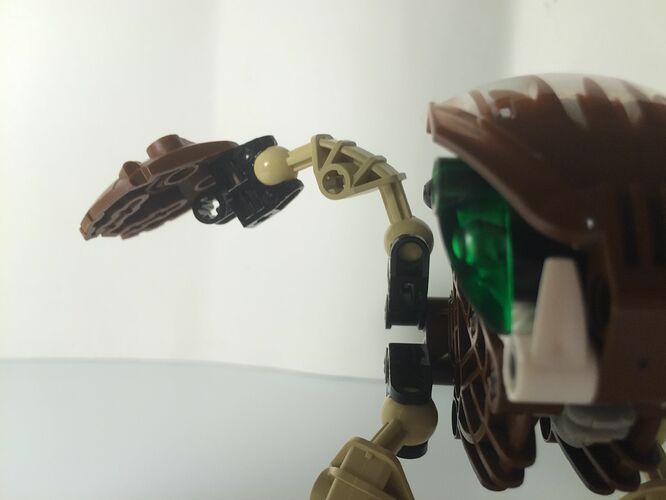 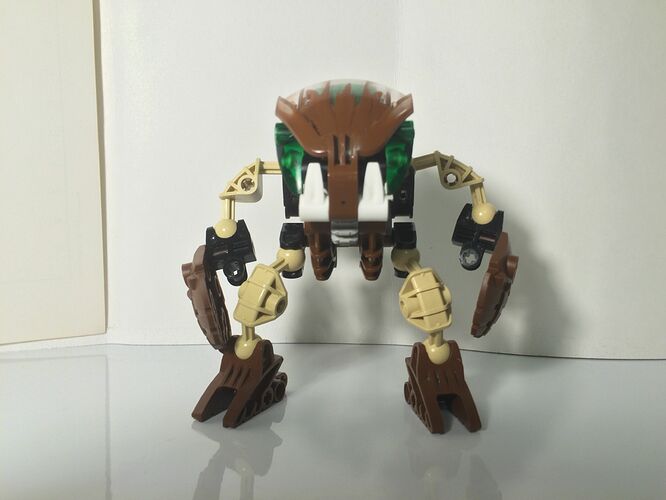 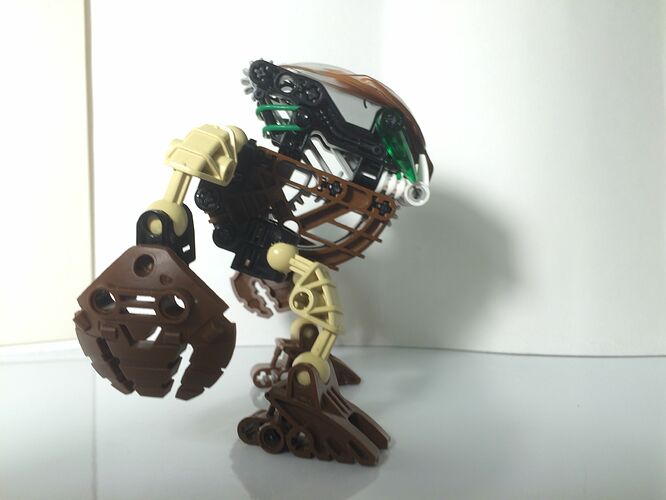 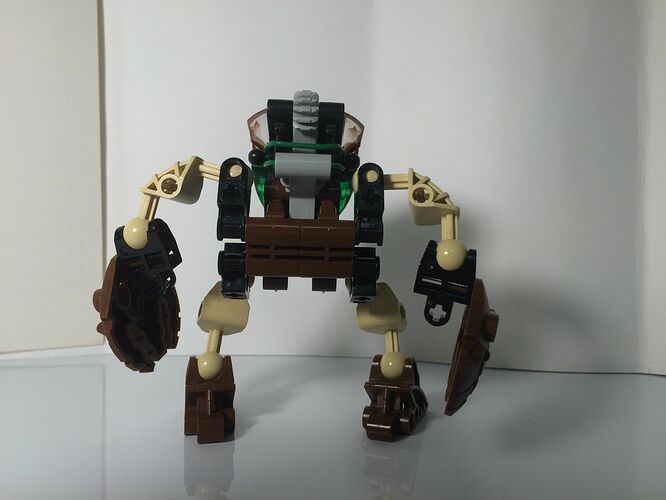 While they may not be the tallest baddies we have gotten, their overall presentation doesn’t disappoint. The stubby proportions and round, pill bug esq physique of the Bohrok give of a great insectoid vibe, which is also exhibited well with the long buggy eyes. I also love the addition of the face plate here, as it makes them feel other worldly, especially with the Krana inside it. 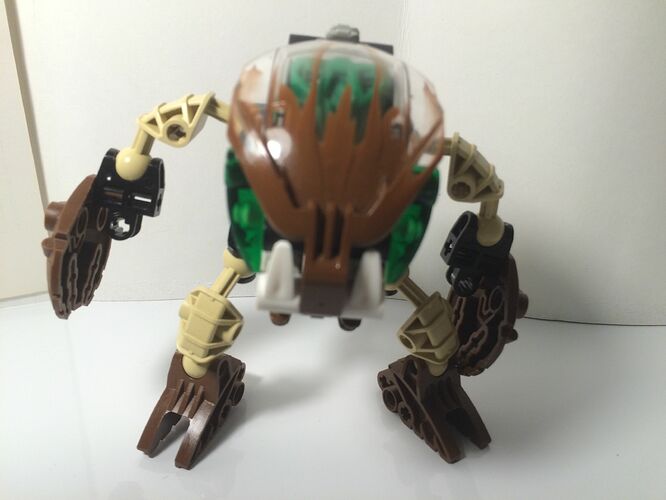 IMG_3004.JPG3264×2448 1.19 MB
One last thing I’d love to praise about the overall look of Pahrak is the face, which is just glowing with personality. The heavy brows, slanted eyes, and protruding teeth make it look quite menacing and incredibly hostile, as though they will not back down until their task is complete. 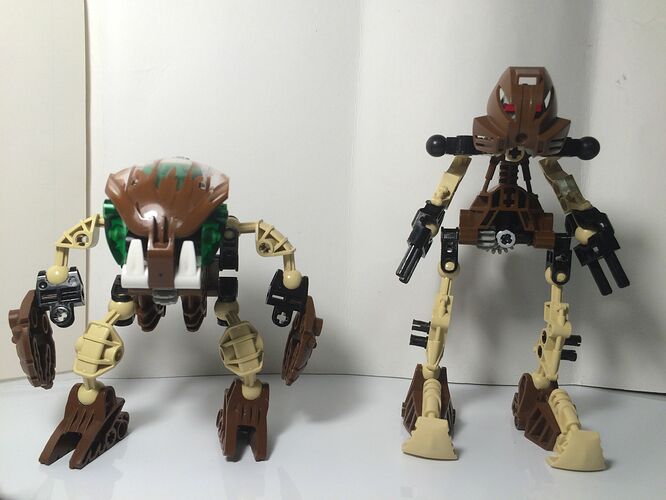 As for Pahrak color scheme, it does an exceptional job at complimenting its Toa enemy or, in this case, Pohatu. The brown, tan, and black are well dispersed and even kept in the same areas as their Toa competitor, with the body/head and feet being the area of the Toa’s main color, whilst the secondary color is shown in the limbs. One minor nitpick I have about Pahrak’s color scheme is that the green eye’s and Krana feel a bit to earthy, perhaps better off on Nuhvok. 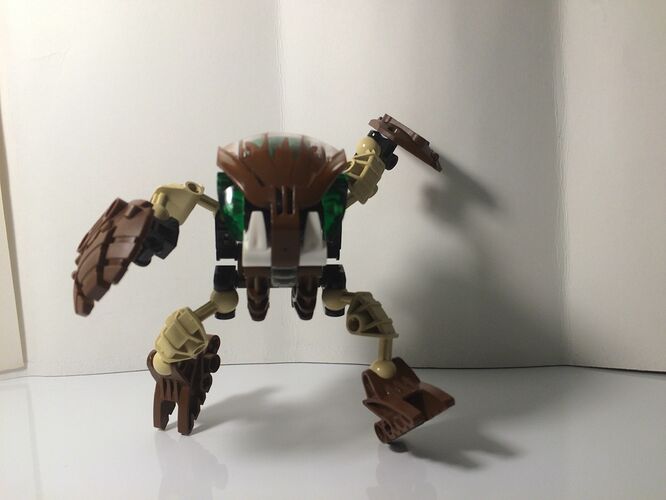 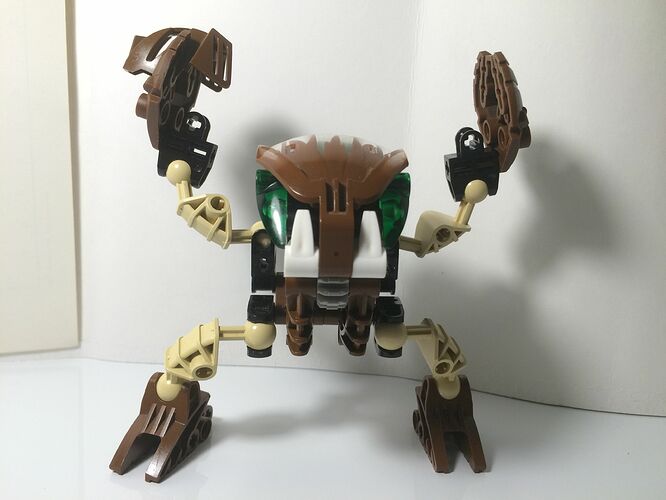 Articulation on Pahrak feels just as limited as the original Toa Mata and Nuva, as the limbs are unfortunately not double jointed, nor is there any head movement. Though this does leave some restrictions, you still can get this guy into some awesome attack poses… If the top heaviness and tiny feet don’t stop you first. 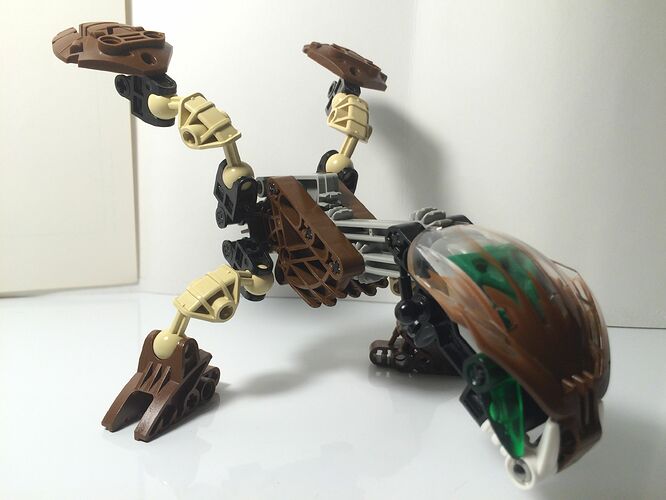 Already does this set hold up well look wise, but functionality wise, man this set is fun to mess around with. 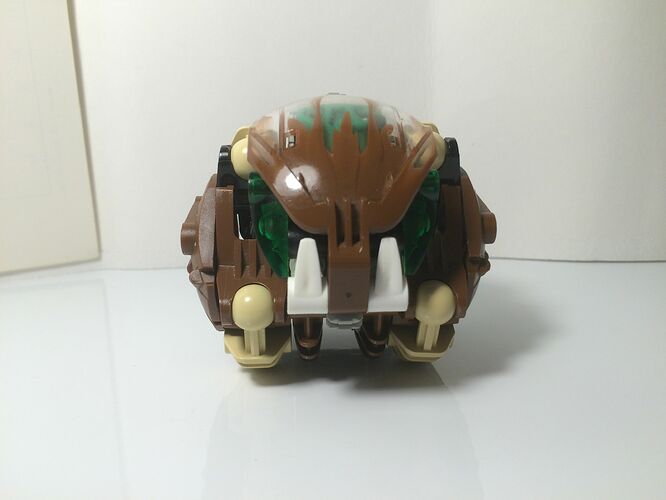 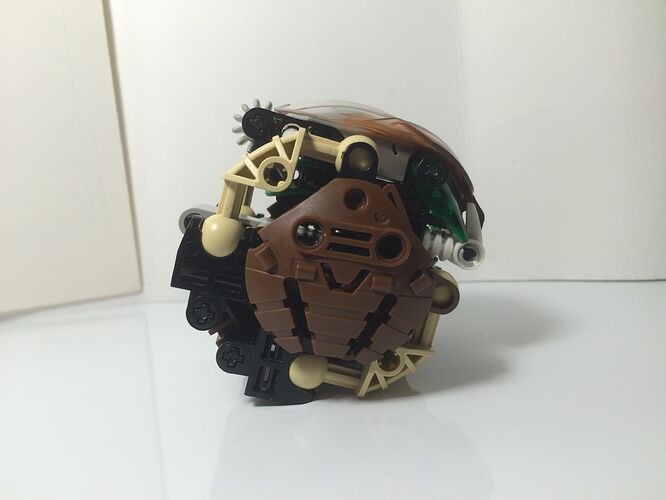 The first function is that by folding up and bringing the limbs towards the body, he can transform into a sphere, which is great as it not only do the limbs interlock in such a way that it looks like a fairly legit sphere, but it allows for you to hang them in their cocoons and roll them around. 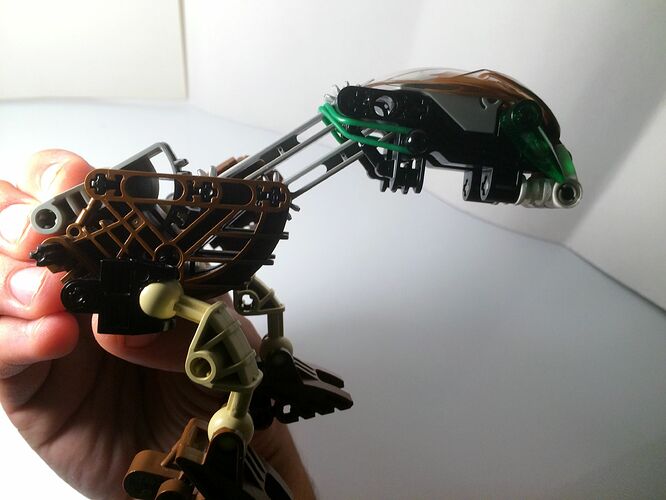 The next function is that by pushing down this lever on the back the entire neck will swing forward in a striking motion. It’s an interesting take on finding other ways to fight in the Kanohi games, though it’s the rapid movement of the function that makes Pahrak and the other breeds all the more intimidating. 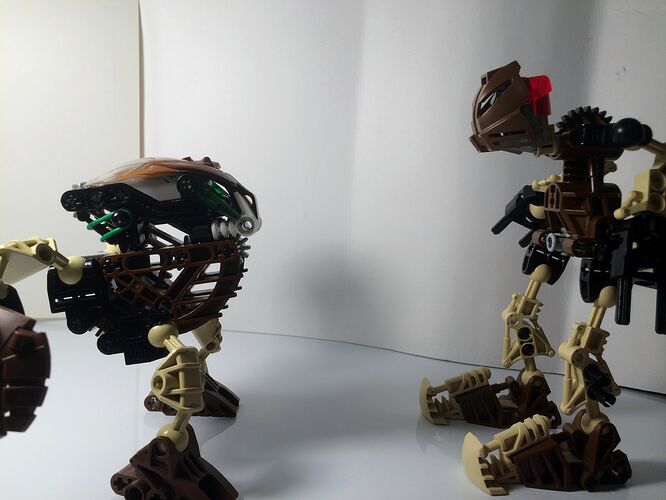 Unfortunately because of how small they are, one would have to angle the Bohrok slightly in order to reach the Toa’s mask, though striking the Matoran and Turaga is much easier. 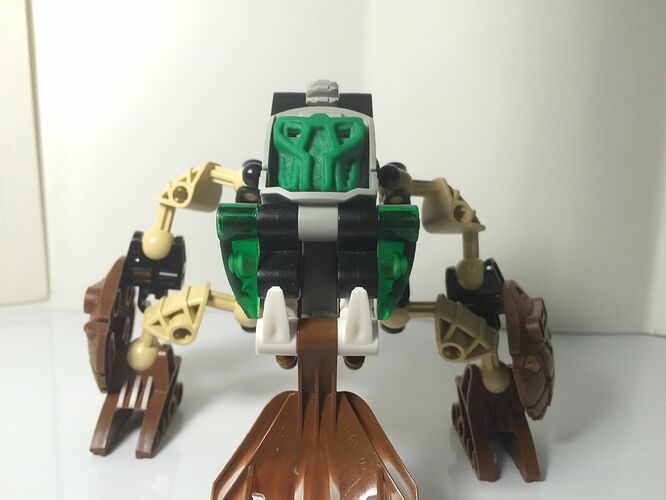 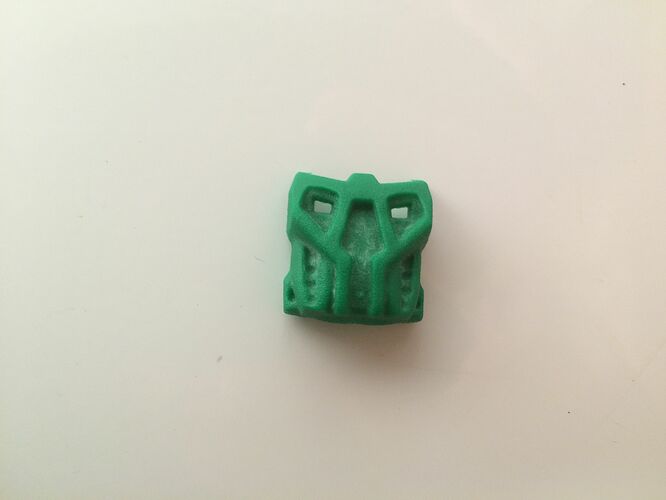 The last function now is that by either pushing down on the eyes or prying the faceplate open, it will swing forward and reveal one of 02’s collectibles, the Krana. The Pahrak I have came with a Krana Su, which has the power to give its Bohrok extra strength. Not only does the Krana store in a pretty nifty way (positioning itself where the brain would be), but by pressing down on the eyes the Krana will launch off for you to apply to a Toa’s face. 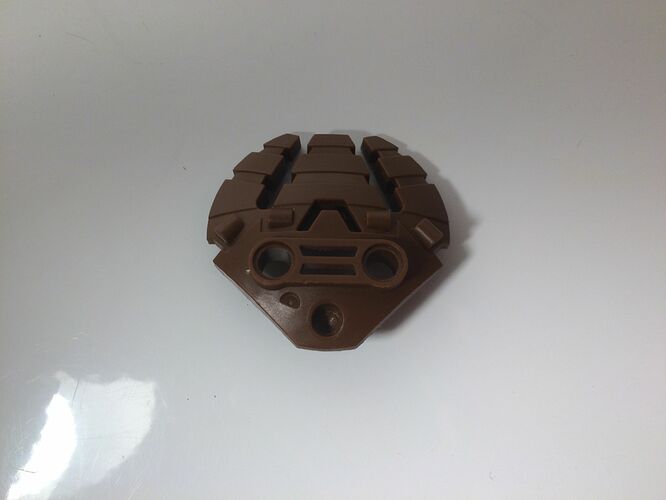 Lastly I would like to take a glimpse at Pahrak’s Stone Shields, which gave it the ability to crumble entire mountains to dust via seismic waves. As for their design, I think it fits the Pahrak’s control over stone as they kinda look like jagged rock.

While they are a bit dated in some sense, Pahrak, no, the Bohrok as a whole still hold up as extremely creative villains to this day, and are some of the better smaller sets we have gotten in G1.

I personally loved the Bohrok too. But the only one I have left intact is Lehvak…(my other Bohrok got scattered into MOCs).

Balance issues due to how tubby they are

Great review! That was a good little read.

Simply put, the canisters of the Bohrok are by far superior to any released during G1, and for one single reason, their storage and interaction with the sets.

I must disagree here. The Mistika canisters were by far the best we ever got. /jk