I want Teal back

Teal was a pretty cool colour 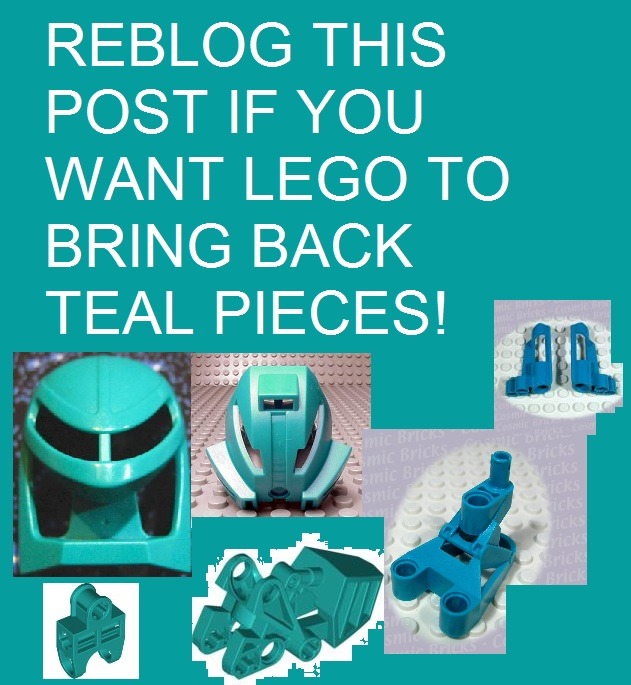 …
wow
I wish I owned teal, I would love to moc with it (part of the reason I want lego to reproduce parts in teal)

Wait so can someone please explain why lego doesn’t make teal pieces anymore?

No one really knows
like
There are a few teal pieces, but its very random (I believe in one city set there is a teal coloured surfboard)

I heard lego phased out teal in 2005 http://lego.wikia.com/wiki/Bright_Bluish_Green
“It is assumed to have been phased out”

If enough people want teal pieces and people are willing to pay money for teal pieces, then wouldn’t that mean lego would have to do what the fans want?

I’d really like to see a lot of teal ccbs pieces such as armour/shells, bones, masks, hands, feet, torsos and even weapons

Lego doesnt have to do anything, One big reason why lego replaced and retired so many colors from that time was because the color was too expensive to make.

But if there’s a market for them to make money if they bring back that colour then wouldn’t they have to because it’ll allow them to make even more money?

HEY LEGO! If you’re reading then please bring back teal pieces so g1 fans can get even more hyped/excited

Hey guess what, lego doesn’t have to anything. Bringing back teal wouldn’t boost profits very much if any at all.

I also seriously doubt that if a lego employee was viewing this topic they would take the time to reinstate teal because one guy loves it.

Lego wants to make money, that’s what they’re all about. People wanted brown back in bionicle and lego kind of brought it back. Lego will listen if I’ve got a ton of money to spend on sets

If fans want more g1 stuff, then lego will maybe bring back some old colours…am I right or not?

There’s a post on tumblr that says bring back teal pieces and it has over 800 notes, how do you explain that?

If fans want more g1 stuff, then lego will maybe bring back some old colours…am I right or not?

You are wrong. We are a small part of LEGO’s profit. They don’t need our liking to make money.

Bionicle doeskin have a big enough following to really do anything about it.

And tumblr is tumblr, home to dank memes, rich white people and activists I don’t exactly think its a reliable source for measurements and even if it was i doubt lego would care.

I’d hardly say that we, as fans, were responsible for it. TLG probably put in the symbols to hit older fans nostalgia spots.

Now, can we please drop this whole “LEGO MUST BRING BACK TEAL” Discussion?

There is the source right there

So what colours would you want to see come back?

So what colours would you want to see come back?

It really depends on what’s needed for a specific set.

So what sets would want to see have specific colours that lego doesn’t make anymore?

So what sets would want to see have specific colours that lego doesn’t make anymore?

Nothing so far. LEGO’s current palette is diverse enough to make nearly any color-accurate thing you could ever want.

What about sand green and transparent pink, do you think that’s a good colour scheme and what colour schemes would you think would be cool, specifically for bionicle?