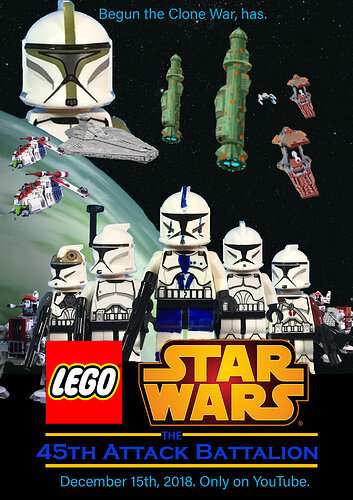 The poster for my YouTube 10th Anniversary film, rebooting the first stop-motion series I ever created. Sarge and his squad of troopers are front-and-center, with Lieutenant Loeb in the background. AT-TEs surround the squad, and LAATs can be seen flying away from an Acclamator toward Muunilinst as two Geonosian starfighters and a Vulture droid leave the orbital gun platforms.

Heavily inspired by The Clone Wars, with some loving nods to the micro series thrown in for good measure, the film will be released on my YouTube channel on December 15th, exactly ten years after the channel was created.