This MOC really took a long time to complete, but it worth it. I struggled to find a good design for the head, and was almost going to not make one. The CCBS parts on the shoulders were a late addition, and they really made a difference in the appearance of the model. I took a lot of inspiration from Transformers: Prime, and the Michael Bay Transformers movies. (all photographs thanks to my sister) 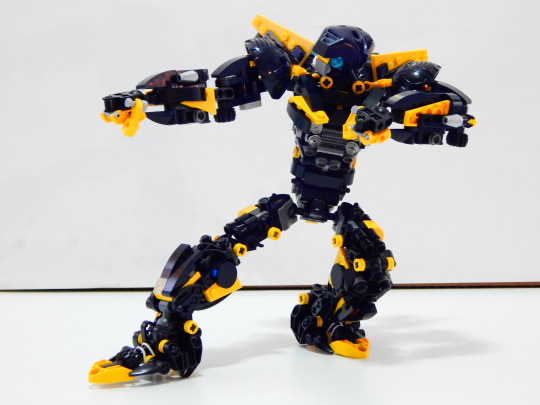 I tried really hard to make sure that there were bits of him that were recognizable as being parts of a car, such as the headlights of the torso 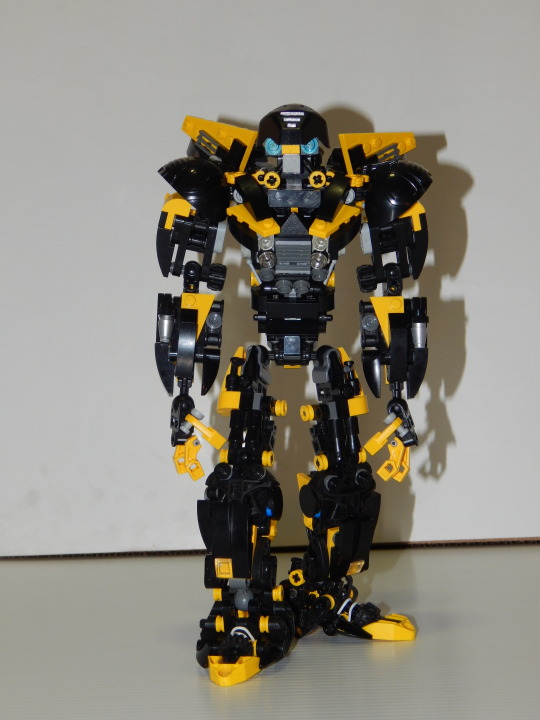 Here you can see the back of the MOC, I tried to find tires that would be in scale to him if he turned into a car. 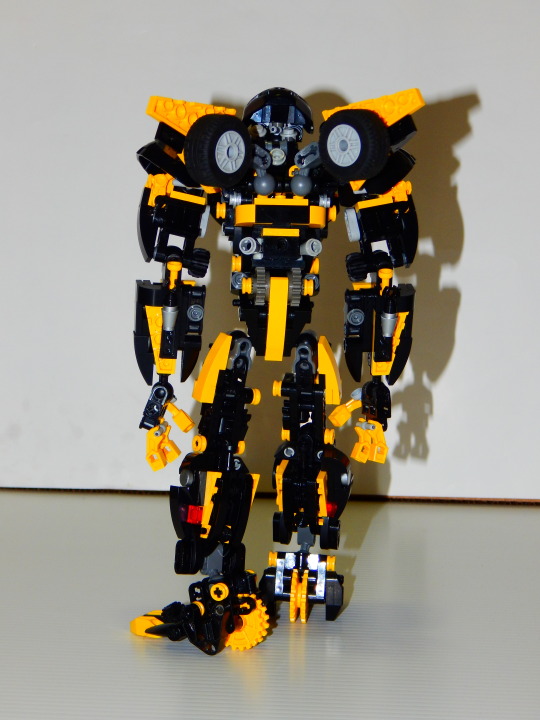 That face can really express a lot, despite being very simple. 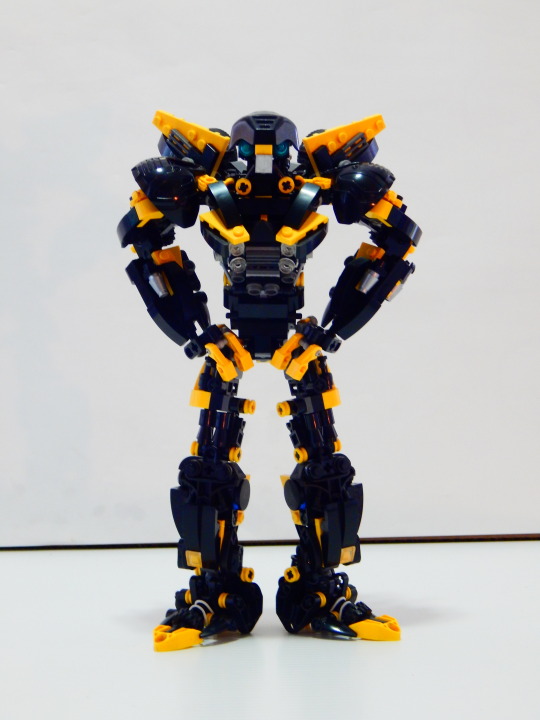 Speaking of that face, here you can see(mostly) how it is built. 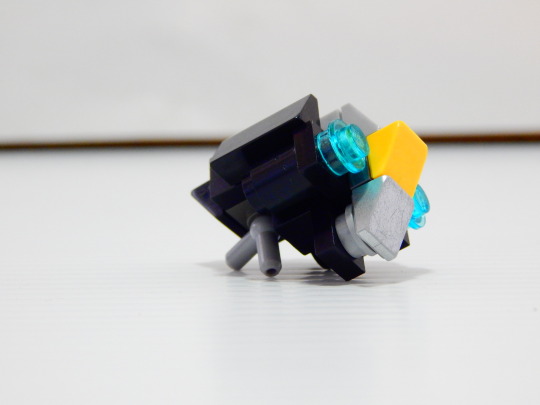 Next up are the legs. Those feet were the first part of the MOC to be built. 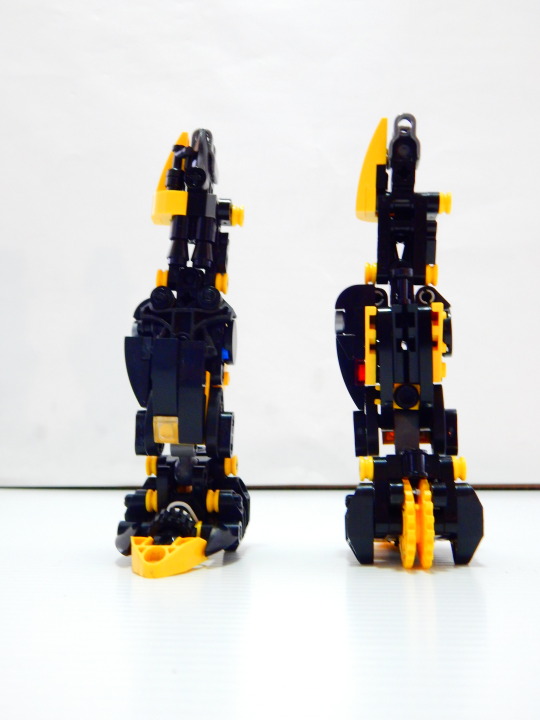 Here you have a side view, I managed to limit flexibility in the ankles (in order to make the MOC more stable) while still making it very poseable. 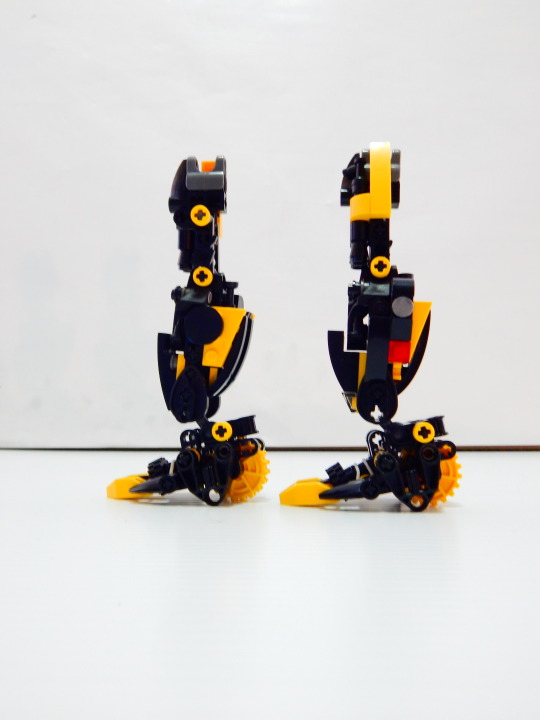 The rubber band feature in the feet was an adaptation of a similar feature I used in a Toa MOC that allowed the lower leg armor to ■■■■■ up and down to allow more poseability. 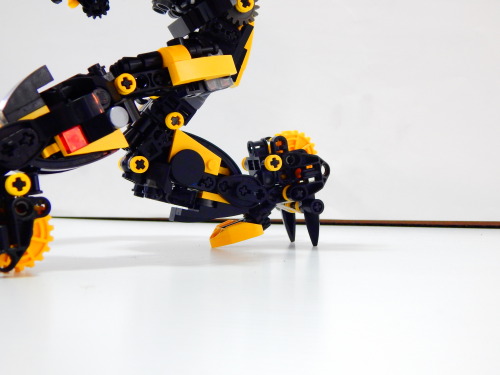 The arms are fairly basic. 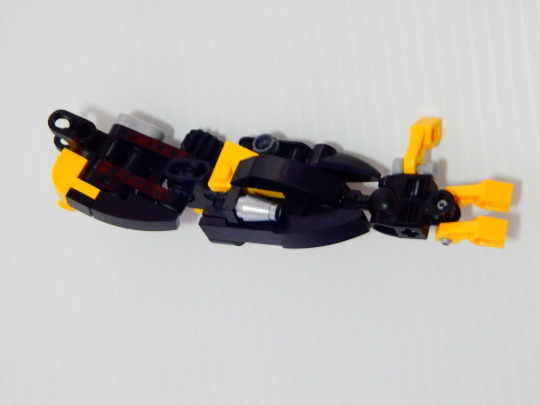 And now my favorite part of the MOC, the torso. 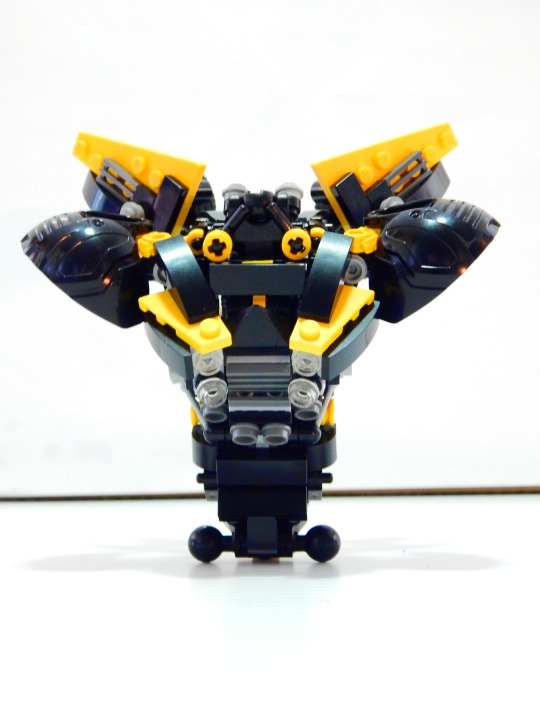 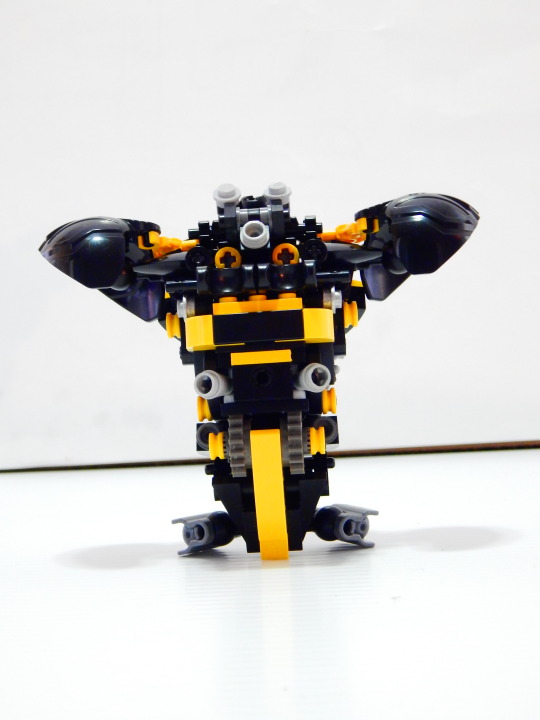 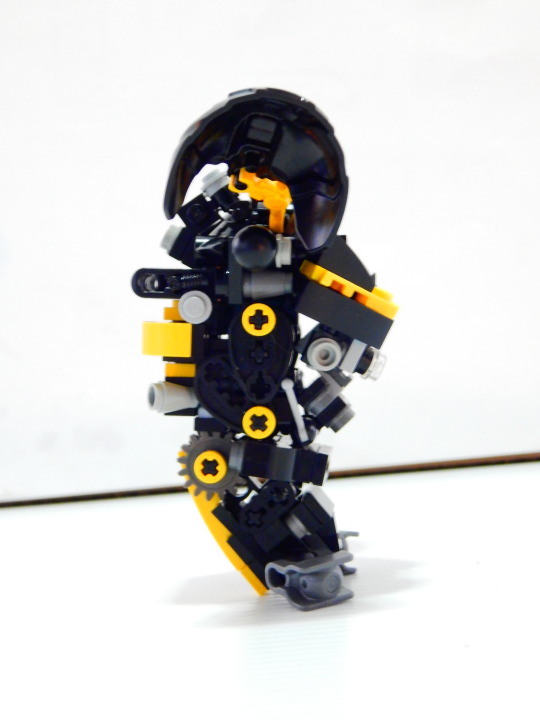 I’m glad I found a use for these old gears. 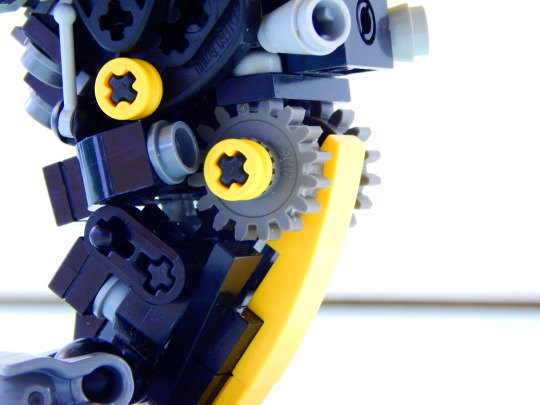 Another late addition, those antena/lever pieces add a lot of detail to the torso. 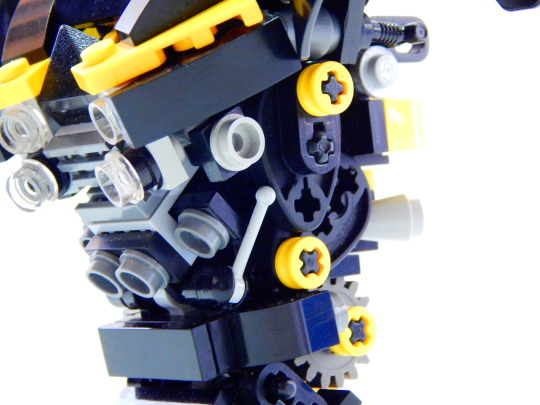 Here is the torso all opened up. 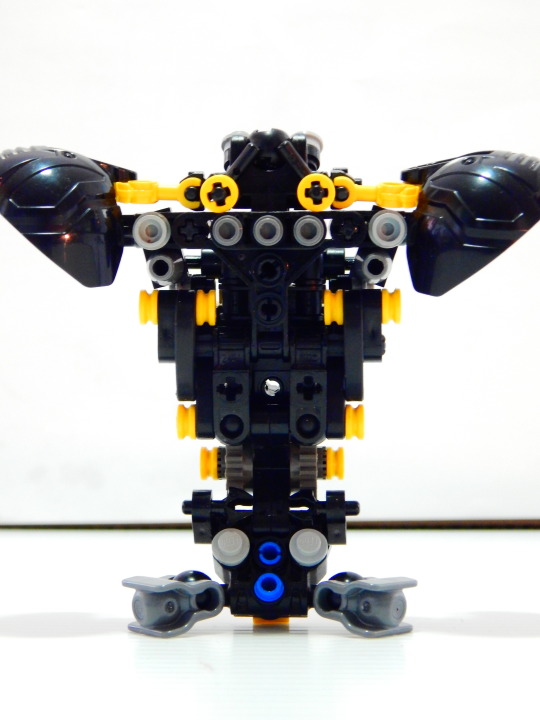 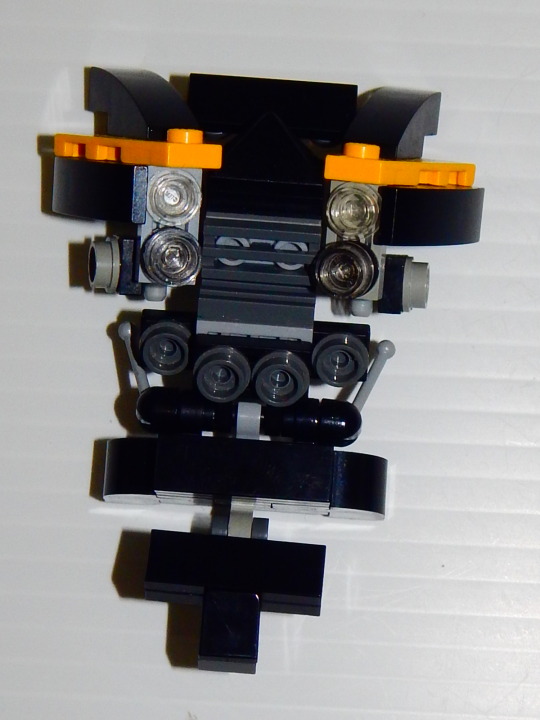 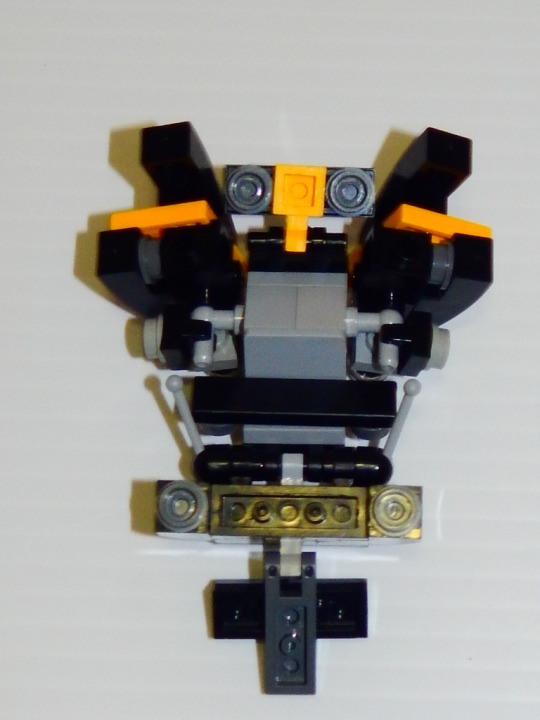 (credit for this photoshoped image goes to Piruk 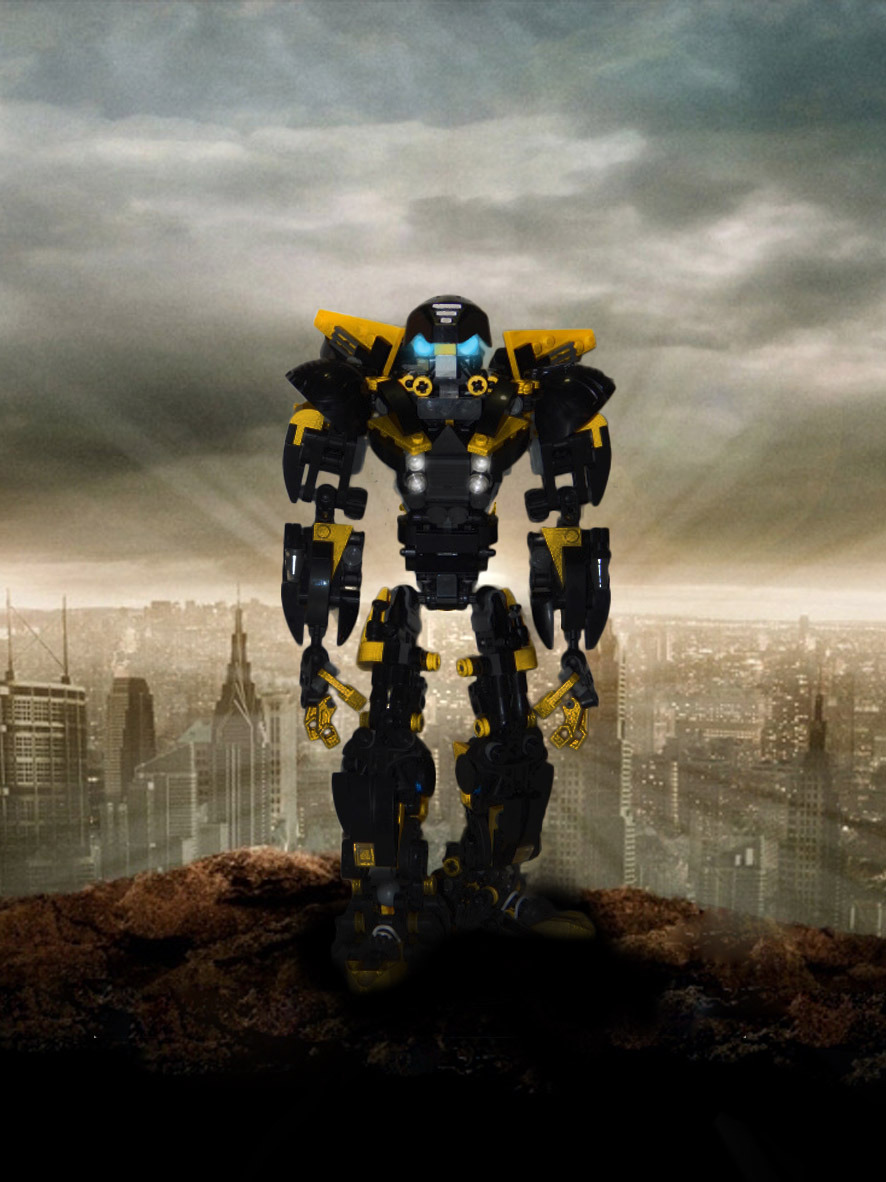 I hope everyone enjoys this MOC, and if you have any questions, suggestions, or comments I would love to hear them.

EDIT: Here is a photo of the unfinished MOC next to Tahu. To provide a better sense of scale. 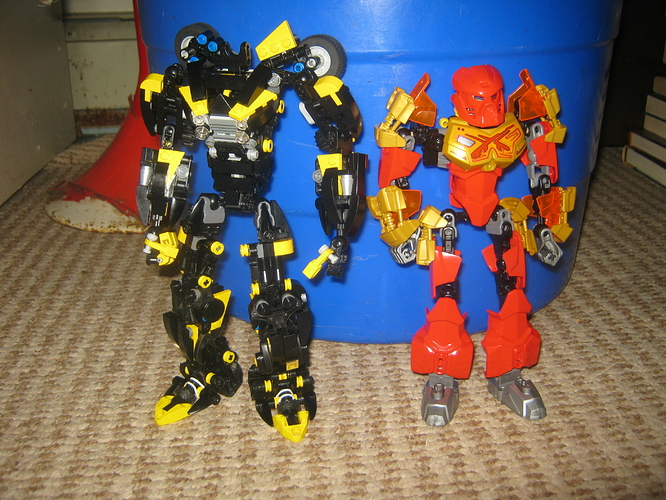 This is cool. Too bad he doesn’t transform tho.

This is one of my favourite mocs now

yeah, I wanted it to but that would have been too hard

Aside from him being able to transform, this is pretty well done

I would say the arms are way too long, but other than that I love how he looks, would have liked to see your interpretation on the arm cannon tho

I based the proportions on Bumblebee from Transformers Prime, so the length of the arms reflects that. I tried to make one arm transform into the arm cannon but it proved to difficult for me at the time, so I settled for the smaller silver blasters on his forearms.

I like all the angles and greebles throughout the MOC. Keep it up!

that head design seems some what familiar ??? hmmmm? 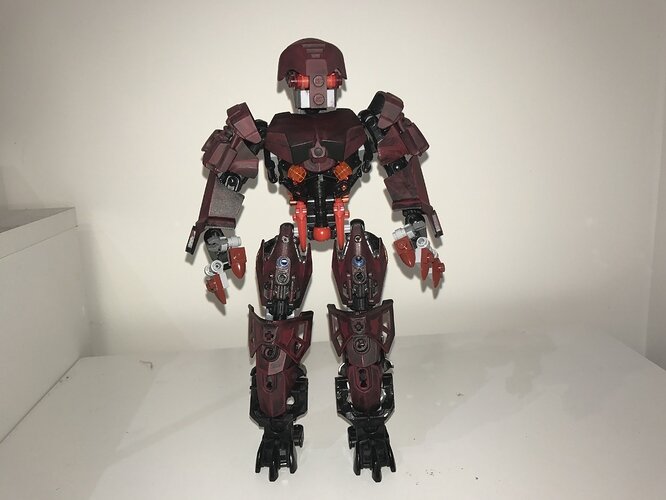 But yeah great moc i love how it looks

The Prime and movieverse Bumblebee designs are my favorite. You did a great job of combining the two!

LOL, I’v never seen that MOC but yeah, the heads do look alike. The colors on that MOC are great, is it painted?

Excellent job, the consistency of the texturing and overall design is well executed.

and yes it is

This is really incredible looking, I love the head. Great work.