Hey everyone, I wanted to show off some of the original characters I’ve been developing over the past few years. With the end of Nexo Knights and a lack of castle themes at the moment, I created these guys to tie Ninjago to some of the earlier castle themes, as well as add in a bit of my Lego lore. These are the same characters as these guys (The Original Elemental Masters) that I posted back in February, but with more outfits. 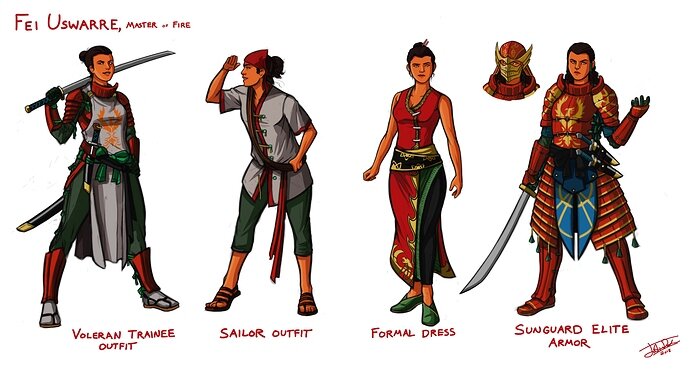 Fei is my attempt to connect Ninjago to the original Ninja line. She is from an island called Voler, which is ruled by Shogun Gi-Dan. I tried to keep the characters and story from the Ninja line. Gi-Dan is the Shogun, and the bandit leader Kendo is trying to steal Gi-Dan’s treasure with his army of red ninja. The one thing I changed was that instead of the treasure being gold and jewels, it’s the residual energy that was left behind when Fei became the Elemental Master of Fire, that exists for all of the Masters. Some points: Voler was the first kingdom to colonize Ninjago, and so Voleran architecture became the standard there, as well as the whole Samurai and ninja thing. Gi-Dan is a direct ancestor to the current Royal Family in Ninjago. 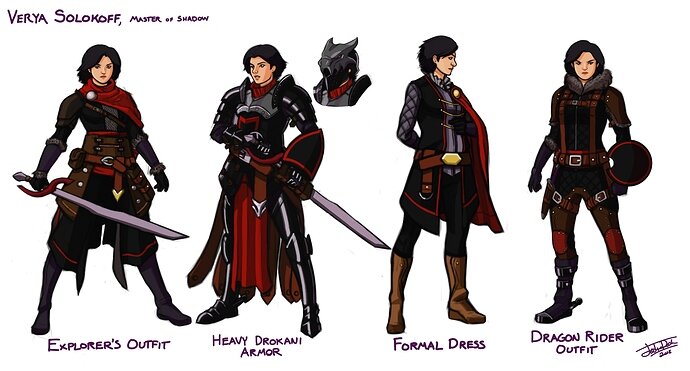 Verya is based off the Dragon Knights from Castle 2013. Luckily this theme doesn’t really have a story, so I had some more freedom. Verya is from Drokan, a kingdom that revolves around the taming and riding of dragons. This kingdom also encompasses the Dragon Knights theme, as well as Fright Knights, albeit in different parts of the kingdom. It also serves as a prequel to Knights Kingdom 2, as the capital of Drokan is Ankoria. After the Overlord was defeated on Ninjago, the dragons returned to the First Realm, and without their biggest weapon, the Burghians quickly defeated the Drokani and took over their land. 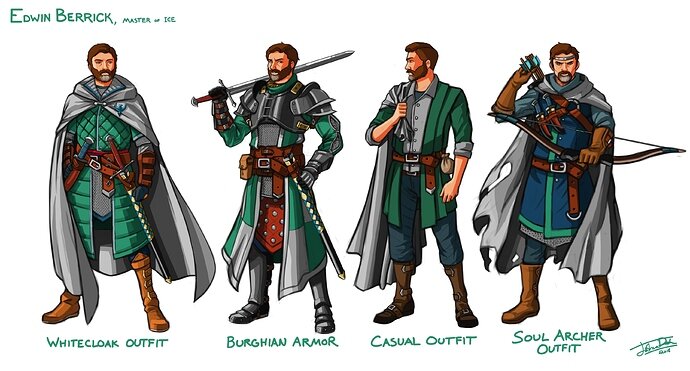 And on the opposing side to the Dragon Knights, Edwin is from Burghia, or the Lion Knights from Castle 2013. He’s a member of the Whitecloaks, a band of bounty hunters that used to be actual hunters when Burghia was smaller. And yes, in my lore Edwin eventually becomes the Soul Archer. Edwin died without any kids to pass the Element off to, so it went to his friend Sigi Aldren instead, starting the trend of the passing the Ice Element off to non-relatives. (Side note: the residual energy that Edwin left when he became the Master of Ice was used to create the Shield of Ages, which is housed within the Citadel of Orlan.) Burghia also houses the Kingdom of Morcia, if you couldn’t guess by the Orlan reference. In Knights Kingdom 2, the king is chosen based off a Tournament, and so after the king of Burghia died, Matthias won the tournament that followed and became the new king. 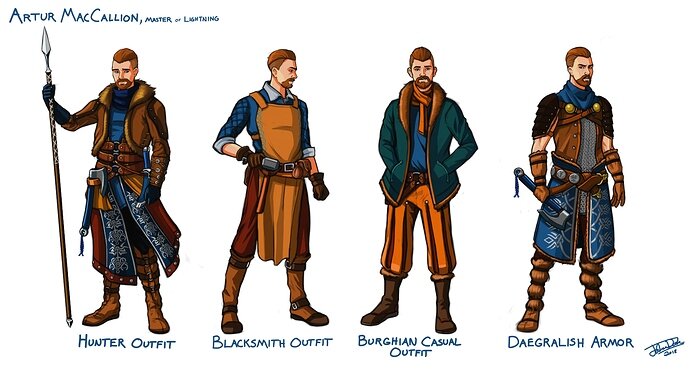 Artur was originally going to tie into the Vikings theme, but I eventually moved that theme to another planet (Ashlar), since it had a bunch of mythical creatures that wouldn’t have fit into the world. Anyway, Artur sort of ties into Knights Kingdom 1, as the country he’s from, Daegraland, is ruled by the father of Cedric the Bull. 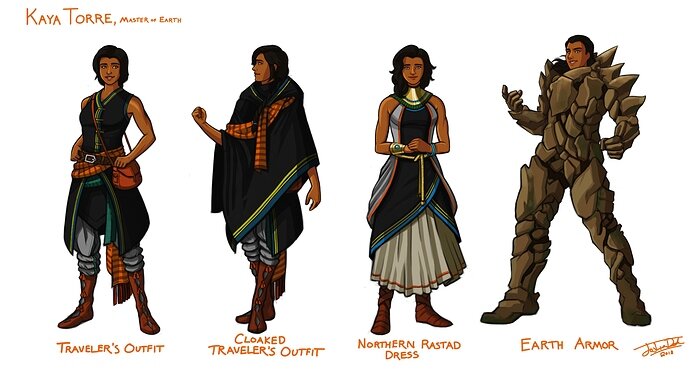 Kaya isn’t really a part of a castle theme, but she is sort of part of one theme that you wouldn’t expect. That theme being Pharaoh’s Quest. This was when Amset Ra was alive and still in power, and before he became a living mummy. Kaya is from the region of Rastad, in the city of Rosson. This region also ties into Adventures, as Rastad is one of the regions Johnny Thunder explores, and Pharaoh Hotep is the son of Amset Ra. (Side note: her residual power was used by Amset Ra to animate the stone guardians to protect the six golden artifacts.) 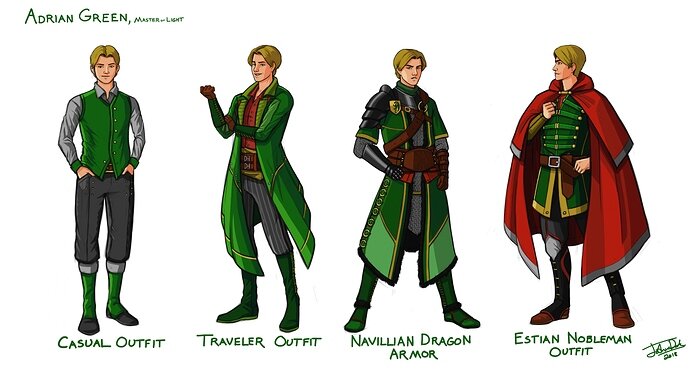 Adrian is part of the Lego Kingdoms theme. He is from Navillia, a wealthy city that is based off the Dragon Knights of said theme (you can see the dragon symbol on his armor). The opposing side in Kingdoms, the Lion Knights, are ruled by King Edgar Astor, the father of King Leo (Knights Kingdom 1) and grandfather of King Edward (the classic king CMF). 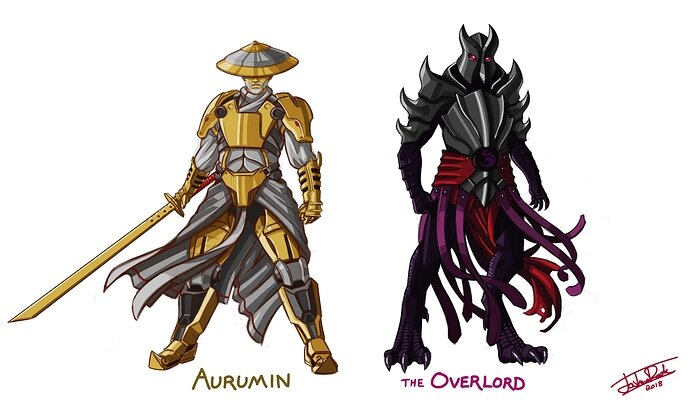 And finally, here are my designs for Aurumin (the First Spinjitsu Master) and the Overlord during this time. Aurumin’s armor is based on the Golden Mech that came with the Temple of Light set, and the Overlord is a combination of the Golden Master armor from Rebooted and the design for an Oni (though he isn’t one). You might have also noticed that his mask is familiar. Well, the Overlord originally appeared in the Drokani region, where he lost his mask in the initial fight with Aurumin. It was found decades later by Vladek, who used it to create a shadow army to oppose King Matthias.

And because this is all based off various Lego themes, I designed all of these characters as minifigures!

My Knights kindom bias aside, these look fantastic.

Vladek discovering the Overlord’s helmet is a nice touch. Overall these look amazing!

These are all very cool. I must say my favorite is the Overlord.

I love it, blending my two favorite lego themes in one story! what if you did a wind master to tie in the fantasy era orcs. I also might try to make a pre-mummification Aspheera to tie in the serpentine (if you don’t know who Aspheera is she is one of the antagonists of ninjago season 11 alongside the ice emperor)