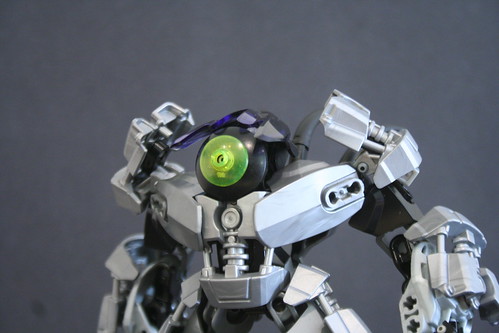 In the time before the Toa, before the Mask Makers had their falling out, Lothar protected the region of Earth from dark forces that threatened its inhabitants. Wielding a club composed of rock and iron melted together and possessing the ability to fire a beam of concentrated light out of his eye, nothing stood in his path for long. When Ekimu fell into his deep sleep, Lothar fell dormant as well. Centuries passed and now he is only a myth to the citizens of Okoto, but he is still deep underground in the caverns of Okoto, waiting for Ekimu's word to rise again.

This is awesome! I just followed you btw...

Really nicely built, although that might be a little too much 2015 add ons.

oh funny, i saw this on the bionicle facebook yesterday XD

The Bulk! THE BULK!

Looking good! I've always enjoyed the look of one eyed MOCs, especially if they're robots.

The first thing I was reminded off was this

As I mentioned when you originally posted this on flickr, I can't get over the fact that despite it basically being a modified PoF build, it looks amazing. The shoulders are a piece of work, same with the head. I still don't like the PoE's mask being used here, but it's one of those things no other mask would really work as well without changing the entire color scheme.

It's elegant in its simplicity and gives the illusion of machinery underneath the covers, I like it! I'll upload my contest moc sometime within the next couple of days when thanksgiving break rolls around, it's pretty schway.

I got to admit this looks great.
Interesting story.