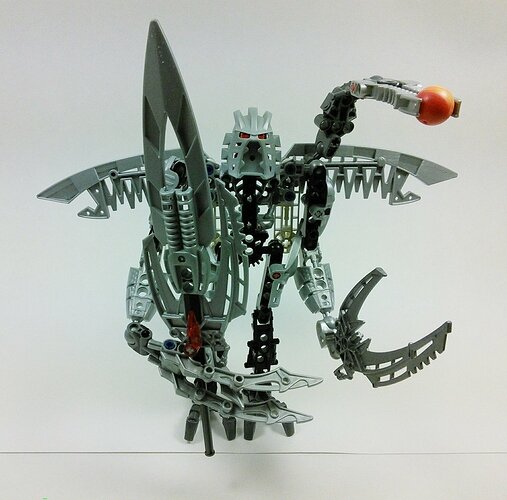 Mobile Energy Core or M.E.C. (Mek) for short was originally an experiment to see if they could upgrade their previous M.E.C’s, essentially walking, self charging, spider like, energy cores that could give quick recharges or boosts to anyone or anything that they were commanded to, unfortunately their first forms required many resources and were rare to be seen, typically kept in labs instead of on battle zones to keep the destruction of them as low as possible, while they may have been well armored they were slow and had very, very limited intelligence, charging one to full capacity took quite a while and one hit to the core in the center would cause a catastrophic explosion. Due to all the flaws and cost it took to make one they attempted to make a smaller, faster, more intelligent version at the cost of less armor, traversability and energy, but faster recharge rate, and more intelligence which could possibly later lead to problems, as shown with some previous experiments done by other makuta.
Mek as he later took to being called was one of 10 prototypes, and the only known one of them left, each of them had a different design, ability and weapons, ranging from something as crazy as a liquid metal one to one as normal as him in the shape of a normal bionicle but pure robotic.
His special ability was his flight, being able to directly absorb or output energy from his hands, essentially allowing him to drain or recharge anything he touches, luckily they compensated for the possibility of the energy fusing his component’s and put failsafe’s and breakers throughout him to ensure that could never happen along with a block on how much energy he could absorb so as to not allow him to become to powerful, and an artificial mask of power.
His weapons were bladed wings, a clawed hand, one shoulder mounted magma cannon and a large double bladed Dagger.
After they were created each of the others either destroyed themselves or been destroyed in testing in battle zones, proved to be of inadequate design and were scrapped or gained enough intelligence to rebel then be destroyed, at least its believed they were all destroyed, before he broke his programming and escaped there had been only two beside him left. Originally he was the must adequate of all of them because he was fully robotic and despite his intelligence he was fully obedient and had no knowledge of right and wrong, just knowing that the makuta had made him and he was to obey them. The only reason he ever managed to learn how to be more than what he was made to be and choose what he wished to do is all because of his that he now carries. Connected to the staff was a rare energy crystal, that the makuta had discovered, that allowed for massive boosts in energy output and such for whatever they were connected to, such as the staff which could fire energy beams, what they didn’t know at the time was that some of the crystals had varying degrees of intelligence and the one in the staff was one of the higher level intelligent ones, being around the average turaga’s intelligence.
How Mek came into contact with the staff was quite simple really, he had been told to go and recharge a large amount of the weapons, the staff being one of them, when he did start to recharge the staff it allowed the crystal to connect to him, corrupting and changing his code to a point where he had his own freewill, all the while talking to him a d showing him what the makuta where doing, after Mek finally realized how evil the makuta where and what they were planning to do with him he decided to destroy all of the data he could find on all M.E.C.’s.
As he fought his way through the lab where he was kept at he was almost overpowered and destroyed before the crystal managed to remove the block put on him, allowing him to drain more energy and essentially explode much of the base just by releasing it. After that he escaped, going on the run and just really exploring the world, seeing what it was like and what he could learn, also fighting any makuta he encountered on the way. After doing this for a while he ended up meeting Tekan and the rest of his team, already knowing the basics of toa’s and such and seeing what Tekan’s team was like and what they did he decided to join them, figuring out that they were probably the best match for him.

Personality: robotic, does not fully understand or know how to display all emotions but is learning. Highly interested in nature and strange landmarks, easily becoming fascinated while just on a normal walk. typically serious due to robotic nature but can be very friendly despite that. Extremely cold when fighting makuta, will kill them without remorse
Crystal: can talk through Mek but doesn’t usually, just letting him say a summary. Old and wise sounding. Quite intelligent and has learned and seen much while being used by the makuta and before, friendly and happy usually but easily tired and can become grumpy if not allowed to rest or woken up to early.

Other attributes: Robotic strength and stamina, stronger and can run and such for much longer than most toa and other beings, fast, less agility due to slight rigidness of form, normal amounts of armor, still has energy core flaw but core has been greatly reduced in size, increased in armor and is buried deep within his chest so it is much, much harder to break.
Has one massive clawed hand which he can attack with and holds his staff with, surprisingly gentle with it, mainly from roboticness, bladed wings, clawed feet, a double bladed dagger-thing, shoulder mounted magma cannon, energy staff which can fire beams of energy or coat sides of blade in energy for more explosive strikes.
Can talk to the crystal or be talked through by the crystal, tends to get into lengthy conversations with it.
Robotic brain allows for amazing aim, calculations while fighting and form and edit plans while fighting, unfortunately it also makes him less cautions then he should be and he has a bit of trouble adopting to the situation as it becomes more chaotic, eventually overloading and shutting down if it becomes to chaotic.
Cant drown or rust but is extremely slow underwater and his sight was not programmed for it, making it harder for him to see. Can eat and enjoys doing so.

Mask power: Energy scanning, Mek can see the energy within others and sense it from a distance, he can also see what types they are, how powerful it is, and the amount of energy in a being along with seeing it raise and go lower as it is used and recharged. 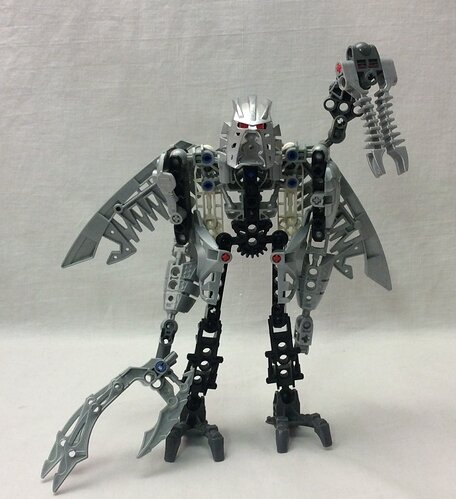 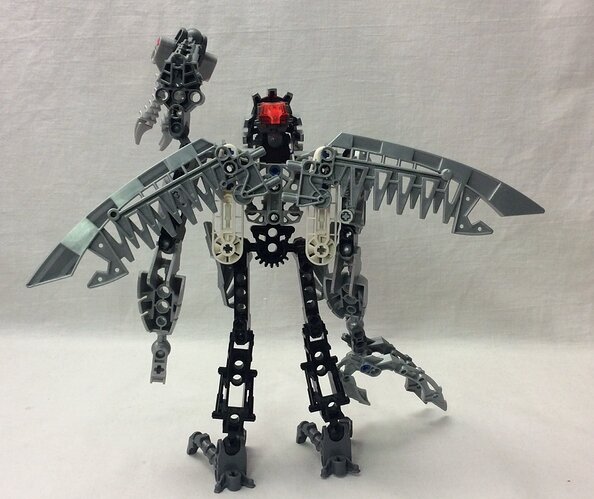 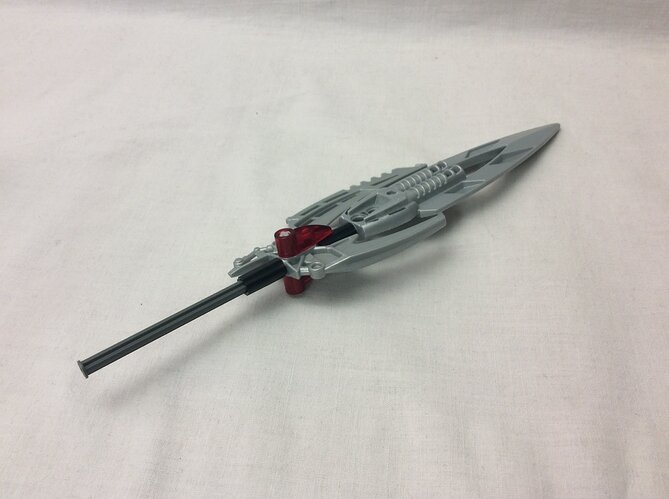 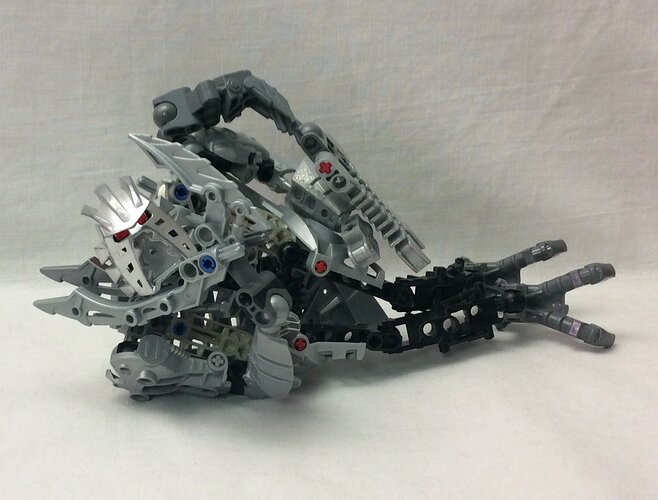 Mek has asked me to inform you that he feels slightly offended for being asked this and wishes to know why you asked for what is usually considered such a… ‘suggestive’ pose from a robot.
(JK but still, really? Really? XD)

Could we get more pictures?

Eh ok, I’ll put em up by tomorrow but really he’s just a basic build with wings stuck on.
Any specifics?

Let’s get one of him in the paint me like a French girl scene from Titanic pose.

… YOU KNOW WHAT?! YOU GOT IT! EXPECT EM UP LATER TODAY OR TOMORROW AT LATEST

That’s a lot of knives, pretty cool if not simplistic.

Thanks, he’s one of my oldest. Made from around the time that I was jus trying getting into bionicle’s and didn’t have a lot of pieces.
The masks new though! Had a chrome spray painted one and figured it’d go best on him until I either made a new guy or just never changed it. =P