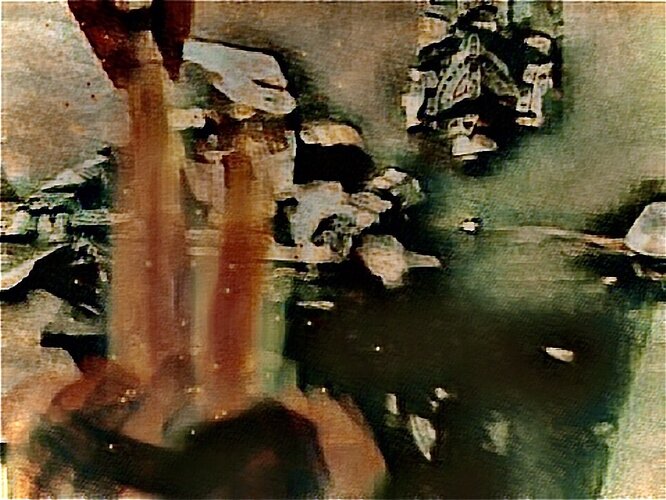 " sup useless mask." The toa of light answered as he finished polishing his sword.

“That’s probably because your spinning.” Artillery answered as he stood up, approached him, and cut the rope that was suspending him. “ow.” He said as he fell on his head, as Yttirum rolled over, He watched Artillery walk back to where he was sitting. To his left-he saw Neriex sprawled on the cave floor.

“I’ll make you hit yourself.”

“She’s bluffing.” Artillery said while gesturing towards her.

“How do you know I’m just not doing it because of what happened last time.”

Artillery rolled his eyes, or, at least that’s what Yttirum assumed he did, he couldn’t tell with that visor He was wearing “Anyhow…, I predict Taox should be awake in about 32 seconds feel free to try to jumpstart that process.” Artillery Announced

Yttirum got up but instantly stumbled back down. Still dizzy from all the spinning.

“How do you know for sure?”

“It’s his stupid mask, it can predict the future,” Neriex answered spitefully.

“That explains one thing.”

“How’d you get that mask, I thought the order destroyed all of them?”

“First, you talk too much, second who said I was from this universe.”

“And you believed me.”

Yttirum had most likely missed that conversation.

“Hey, you! you’re finally awake. you were caught trying to cross the border.”

“I’m joking.” Artillery admitted he then stood up and cut the rope holding Taox, .who then promptly created a blade made of ice and pointed it at Artillery’s throat.

“Why should I trust him!” Demanded Taox

“He’s got a point.” Artillery gestured to the icicle as he failed to suppress a snicker.

“That’s not funny!” Said Neriex desperately trying not to laugh.

“Finally someone who has a sense of humor!” Artillery said while pointing at her; his gaze still transfixed on challenging Taox’s.

“Taox, it’s okay; he’s with the order.” He lied as he proceeded to lower Toax’s arm.

“Fine!” Taox finally said as he jerked his arm from Yttirum." But don’t expect me to trust him, even if

Yttirum asked, knowing if they weren’t back by their deadline, the order would send reinforcements.

“1.we’re two miles five clicks southeast from our “encounter,” two it’s about half past 2200 hours, three spicket.” Artillery answered dusting off his coat as he got up, doused the fire by kicking sand on it, and pulled the sword that was sticking out from it.

“We better start back on our little “expedition” before it gets hot; by then, we should be in bota Magna or at least the edge of it.” He said as he pulled Neriex up, she stumbled but managed to gain her balance.

“Magic!” He said as he waved his hands in front of his face. “Also!” He turned to Neriex “Don’t try reading my mind; it won’t work.”

“Told you, too stubborn,” he said, gesturing at Yttirum.

Artillery led them to makeshift pin where their transportation was kept, in there as he said was a spiket, a well-fed looking spiket, he jogged up to the creature and began stroking its head as he untied the rope from its neck’s.

“Try to keep up.” He said as he mounted the chariot.and took off

Neriex ordered as she mounted her sand stalker, and followed Artillery’s example.

Taox said as he mounted his, but this time was waiting for Yttirum to mount his beast.

“All right, I’m coming.” He said as cautiously mounted his beast.

They had been riding for hours, and frankly, Yttirum was sore. “How come he gets the chariot.” he thought.

“Because he owns it.”

“WILL YOU PLEASE STOP DOING THAT!” Yttirum warned, “and didn’t he disable your powers?”

“For him, yes. still have no idea how he did it, though.”

“Why are we stopping?” Taox asked

“Take a look for your self.”

"HOLY HECK HOW DID WE, MISS

THAT!" Yttirum shouted as he gawked at the enormous flat wall of stone.

“It seems to have some psychological disguise,” he said as he made a swirling motion next to his audio receptor. “which seems to make you overlook it, aha! THAT’S BRILLIANT!”

“It looks somewhat natural as if it was raised rather than built.”

“There has to be an entrance, but where could it be.” Artillery mumbled as he dismounted and pressed his hands against the stone. Suddenly a ring of light encircled his hand and cut it off." huh neat… The wall seems to be trapped!" Artillery called back perfectly calm while he pulled his hand off the wall and reattached it. “Climbing, it’s not an option.” Artillery said, going back to mumbling.

Funnily enough, Taox seemed fine with this. He looked like he was staring off into space.

Neriex shouted as she tied up the sand stalkers.

“That’s the point!” He shouted back, then immediately continued mumbling to himself." Where could it be, here?..nope." as he dodged multiple arrows that shot from a trap he triggered.

Artillery shouted from the wall, jolting Taox from his trance.

“What?” He said as he walked up to Artillery, his hand on gripping his knife.

“You think you could freeze the wall?”

“Why.” He questioned, clearly intrigued.

“Well, I was thinking that the being whose controlling the mirage hiding the door won’t know if it’s frozen-”

Artillery placed his left hand on the wall triggering a trap that grabbed it and started burning it; the worst part was Artillery’s reaction." ow, oh GAH the pain." He said in a monotonous voice, he then grabbed Taox’s hand and placed it where the scorch mark the shape of his hand was.

“Work your magic.” Artillery jested as he backed up.

Yttirum was astonished at how quickly he froze the wall, except for one part, the frame of a passageway.

“B-B-B-BINGO!” Artillery shouted as he raised his arms

Artillery walked up to the door then turned his head to look at them. “look. Let’s try and stay together if we don’t this next part’s going to be even more difficult than it needs to be.” He said exasperated as he proceeded to walked forward soon disappearing from sight

Alright short chapter today (don’t worry they get longer, I wrote this chapter back in August 2019.) I’ll be posting some more chapters on this post so stay tuned.