As some may know, I have this one character that I've been working on for a while, and it's been really quite difficult. It's a makuta character named Blacklight. I call him that because the plan is to insert lots of trans-neon red, but I won't be getting there until he's actually mostly done. Right now I'm trying to work out the frame of him. So far, this is what I've been able to accomplish. A torso, head, and maybe how the leg will look. 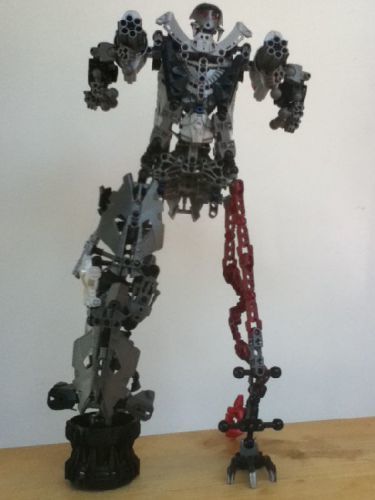 The other leg, in case it wasn't obvious, is just there to keep him standing. The torso is basically done. Also, I stuck his hands to his shoulders, in place of actual arms. 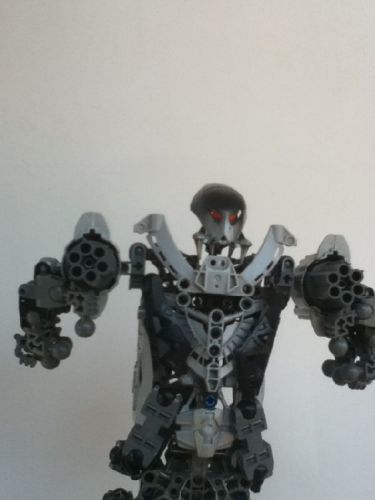 Closer look at the torso 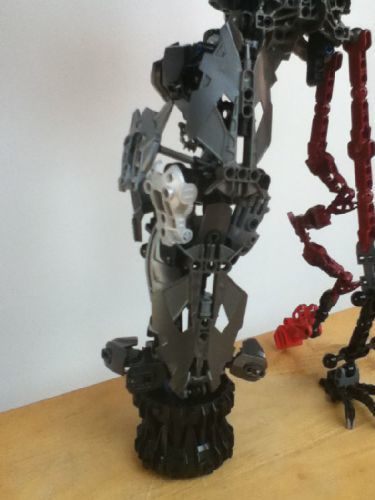 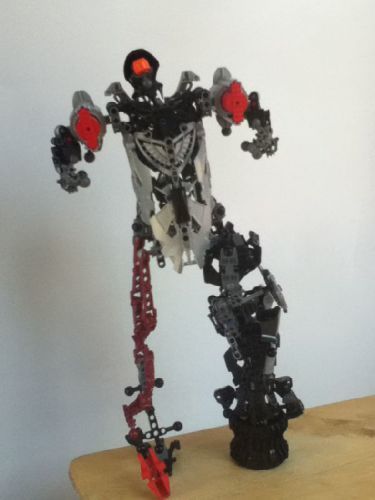 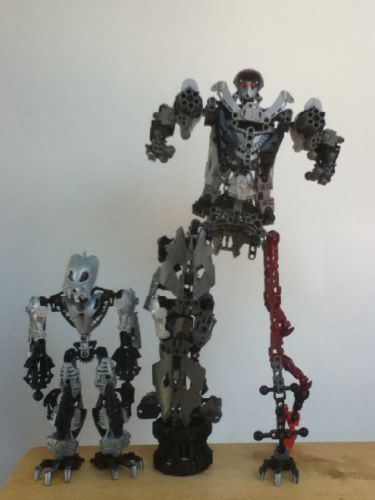 And vs. an Inika Build.

Can't wait to see the final model! (the head looks a bit small though)

I agree completely. However, I think it kinda adds to his sorta image as a dumb, brutish character. A pin-head, if you will 8D

I never liked big, bulky characters. Sure, they are hard to build, but they don't impress me one bit. Perhaps shorten him a bit, or at least make him more sleek. If it's one thing I know about makuta, is that they are naturally skinny and sleek characters who anyone could identify.

Of course, you could always go for the fighting type of Makuta, too. Some Makuta wear different armor because they need to fight better. But at least make them sleek, too. One example is my Makuta named Tagah.

A good Makuta does not need to be tall or extremely buff. They just have to look good.

The big guy kinda reminds me of Teridax in that one "The Kingdom" alternate timeline.

Well, Kingdom Teridax also was very asymmetrical with pieces of other Makuta and Rahkshi grafted on to him, from what I recall..

If it's one thing I know about makuta, is that they are naturally skinny and sleek characters who anyone could identify.

Wasn't 03 Teridax supposed to be a huge, hulking being?

Teridax is a different one. He is one of the most powerful Makuta in existance. As such, he still had a bit of sleekness to his build. Perhaps I'm wrong on that part, but most Makuta end up being creatures not pleasant to the eye, and end up being skinny and sleek. However, there is exceptions if they take different armor.

The head is quite smal compared to the body.

Agreed. Whenever I make huge MOCs, I use huge heads.

heads a little small, and the legs look a little too messy, otherwise great wip

I never liked big, bulky characters. Sure, they are hard to build, but they don't impress me one bit.

Sorry for late reply, to preface this.

I agree with that sentiment, and understand it completely. To be honest, I actually kinda regret making this topic at all, but whatever. Too late now. Really, the only reason behind even starting this hideous monstrosity was just for the sake of having a large character. I admit that your points about a typical Makuta's build and appearance are indeed valid, and backed up sufficiently by the official fiction.

I like to think that I do follow that to some degree with other Makuta MOCs I make, with this one being just something of an exception

With Razira here being a prime example. But then, one could very easily make a case for him being messy, simple, and just all around meh at the same time. So oh well. Likely what I'll end up doing is just dismantling the WIP altogether and cancelling the project entirely.

And while it isn't an excuse for how poor and unimpressive he looks, I will say that his large bulky nature as a MOC was mostly based off his in-story character and background. But like I said, I admit wholeheartedly that it is no excuse for a MOC's quality.

so what happened to this?

Became super part-heavy so I had to basically give up.

I think Razira looks fine, though those drills look too big to be what I guess is knee armor.