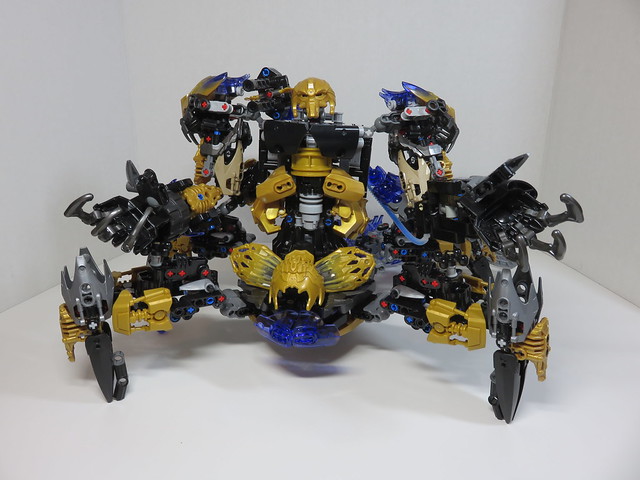 This was my entry to the Bionicle Gen 2 Makuta Building contest. Took 3-4 weeks to make this and it is the most complicated build that I have ever made. Here’s some of the info that I have put on Flickr:

I you don’t know, in maori, fanau means reborn.

I had some goals for this moc that I wanted to accomplish(and distinguishes it from the other entries, noticed this while building him)
-chest that has foldout cannon
-legs with foldout turrets
-an arm that can transform into a cannon while still looking coll
-a swiveling waist that when twisted, the tail would move

Unfortunately, I was never able to get the last feature in but I’m pretty happy about it still.

Some fun facts about it:
Made only with pieces lego is producing today
-took me around a week worth of time to build(no, I don’t mean it took me a week to build, built it from around August 8-10 to the day I am posting this)
-requires no support to keep it up

-made more for playability than being cool

I am hoping on making a video showing off the functions of it soon on my channel:
www.youtube.com/channel/UCNgum0SWb2GAXfJ6zC-hrqQ?spfreload=5
Here’s a basic video showing it off(I would like to make a more detailed, better video still):
https://www.youtube.com/watch?v=Huetd-M_9js

The story behind this moc:

Years have passed and the era of the mask makers has long been forgotten. Knowing that he has been forgotten, he started pulling the strings of destiny from within the realm of shadows, eventually gaining an army’s worth of supporters that he calls the Champions of Makuta. He even tried to pull the strings on any events, even small ones, that will benefit him. After being set free from the Shadow realm, he was quickly defeated by the heros of today, shattering his body and completely destroying his legs. But Makuta was not done yet, he escaped the confines of his body and, by using his original body, created a template that his champions used to modify and improve him. They created parts from scratch, melting pure gold for his armor, they even stole very high-tech technology to make his brand new body. Entering his new body, pistons and energy sources hummed to life. He easily swatted the heroes with no effort and went all over the world, corrupting the preserved masks of the toa, including the mask of creation. He manage to almost completely drain the mask of creation but he couldn’t take any more power from it. Now, armed with his newfound powers and strength, he ripped a whole in the space-time continuum. He led his forces, both robotic and bio-organic, and charged the stronghold of Ekimu and Makuta, For Makuta Fanau wanted to harness the potential of his projects long perished by time. Did he end up winning in the end? The outcome was lost to time.

Now for the newer info:
-Half or a third way thru making this, I noticed that I was using only pieces Lego made today, giving me the idea of putting it up on Lego Ideas when I was finishing make it

-when I was building it, I tried to focus on play features, as stated before, but I most importantly tried to look back at both generations(mainly gen1) and see what made it great. From the story, to the look, it looks like it would fit in with the Bionicle of Gen 1(well,to me that is)

Now more on Lego Ideas, I noticed that there was news stating that Lego was never going to release a Makuta set. Plus, they haven’t done many non-bipedal Bionicle sets in both generations. I hope that it can be supported in time so that we can get an official Makuta set, with an addition of special, exclusive pieces such as a translucent purple Mask of Control and black(corrupted) versions of the toa’s 2016 masks.

Hopefully you guys like the design of Makuta Fanau, Ripper of Time and decide to support it on Lego Ideas: 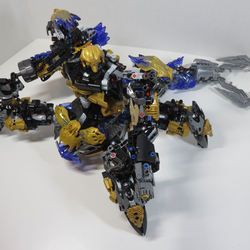 The story behind this moc: Years have passed and the era of the mask makers has long been forgotten. Knowing that he has been forgotten, he started pulling the strings of destiny from within the realm of shadows, eventually gaining an army's...

Looks pretty good. Though, I can’t give my fill opinion, due to the lack of pictures.

The base is cool and so are the functions, but the torso and arms are just too cluttered.

Looks waaaaaaaaaay to cluttered. The colours Gold, Silver, Trans Clear, Red, Gunmetal, Dark Grey, Black, Trans Purple and Dark Tan, you need to get rid of some of those colours, Mainly the silver, dark tan and try and cover up those red pins.
Also more pictures would be nice.

The torso is is to square and has a lack of armor pieces. The shoulder joints are too thin, look too big for the body, and I can’t help but notice the sand colored pieces below his shoulders. I would like to say this is a great MOC, but I can’t.

click on the picture, it’ll bring you to an album on Flickr with a whole bunch of more pictures

This is an amazing build! My only problem is that those tan vorox armour pieces really stick out. Other than that, this is fantastic!

I know that it may look cluttered, I am thinking about making a version that is cleaner but still works like it previously did. 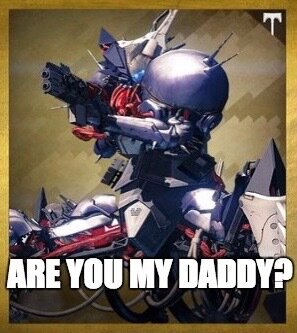 Way too cluttered, but with refining, could be quite good.

I definitely want to make it better, and possibly allow people to rebuild its legs into humanoid legs. I had to do my best with the pieces that I had. Currently the bottom half is in pieces due to wanting the count the pieces of it. Make no mistake, I am trying to make this a Makuta built by a fan to give fans an official Makuta set

Looks pretty cluttered, but I like it.
The functions are nice, too.

thanks, I’m currently in the process of changing the amount of different colors in it