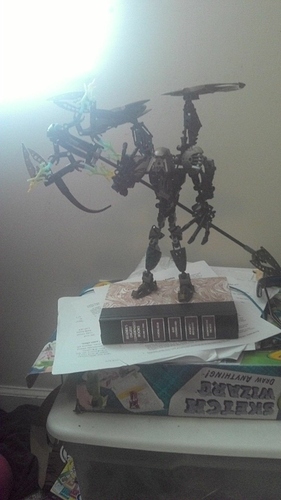 Kohuru was always evil. He was created as a jailer for Rahi that couldn’t be controlled.He was intended to protect the people from them. He killed them anyway. If a Rahi was easily engageable and vicious, he lock them in a room with a Rahi who was patient enough to wait him out- and then powerful enough to tear it to shreds. His actions were based on his belief that only the strong should survive, which led him to one conclusion- the strongest beings should live, while all others must be exterminated. One good thing you could say about him, though, is that he was good at judging how people would end up. As such, when Teridax announced the plan, he sided with Teridax for immediate survival, but later faked suicide. He always knew that no matter how ambitious, skilled, and powerful he was, he just wasn’t powerful enough to ever stand a chance against Mata Nui. Him, on the other hand, thought he stood a chance. After he disappeared, he went to an uncharted island in the South. He had previously heard about it from a Matoran explorer who washed ashore on Destral. The first Makuta to see him was Kohuru, and after hearing his story, he took his maps and writings, and threw him in a room with some early prototype Muaka tigers. He then disposed of the boat before any other Makuta could find anything out. regardless, after his fake death, he went to this uncharted island and found the dead matoran’s hut, and built himself a fortress on this island. Slowly and quietly, he collected a good number of powerful and influential beings who could keep their mouths shut. Some were Turaga, some intelligent Rahi, and even some Toa allied themselves with Kohuru, and established the Second Empire. None of his allies knew that they were helping him to overthrow the universe, thanks to his mask power masking his true intentions. But, despite all of his allies thinking him to be a nearly perfect being, he was infact planning to take all of them out one by one after they’d served their purposes. In fact, he in a fit of rage he impaled one of his own Rahkshi on his Staff of Ridiculous Power, frying it. But, eventually, when his plan was about to go completely into effect (when he felt the universe was in his grasp), he made a fatal mistake. He needed to make a rendezvous with his Makuta spy on Destral, but unfortunately, this meeting was noticed and overheard by Jormuntrax, the Brotherhood’s master of spies, and tracked back to his island fortress. A fierce battle ensued, in which Jormuntrax managed to tear the mask for Kohurur’s face, and proceeded to absorb his antidermis consciousness, learning his entire plan, which he then reported back to Teridax on Destral. overtime, the Second Empire crumbled. The final nail in it’s coffin was when Kohuru’s second in command, a corrupt Toa named Arturang who Kohuru had been teaching mastery of shadow (he discovered the way to give beings the shadow element separately from Mutran, and had also found a way to allow the being to retain it’s original element as well), was killed in a battle before taking his teacher’s place the head of the Empire. Overall, Kohuru was a truly brilliant Makuta, but he got what was coming to him in the end.
Oh, and here are the rest of the pictures. 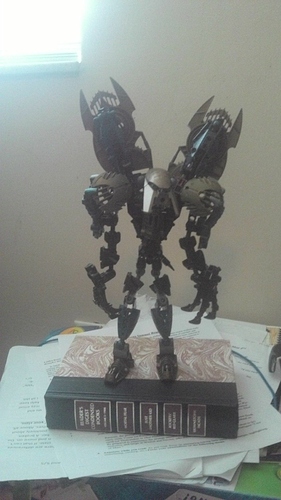 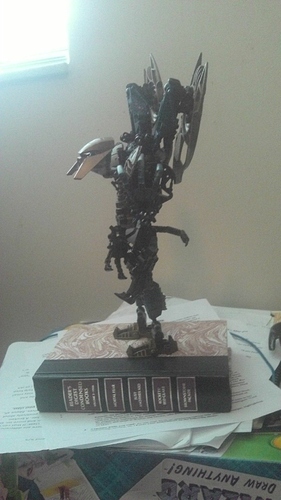 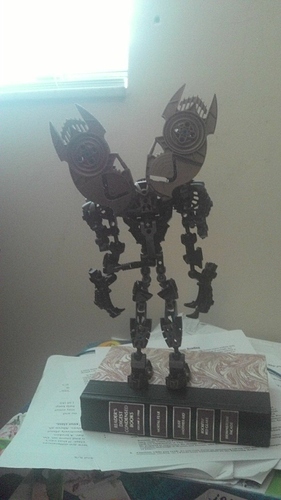 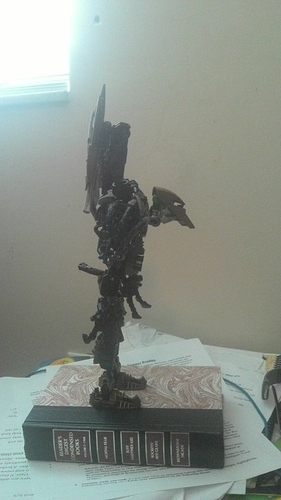 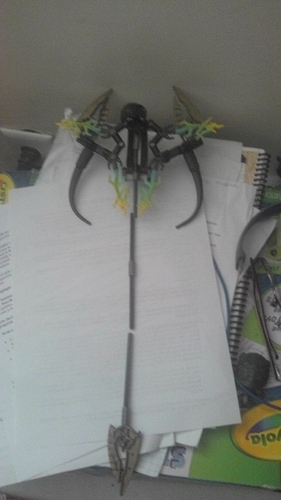 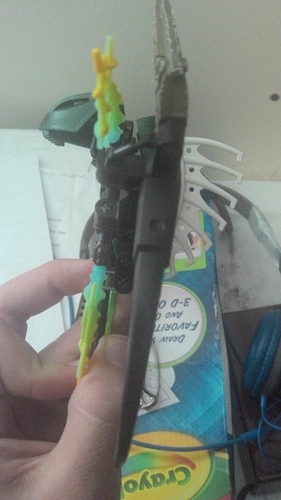 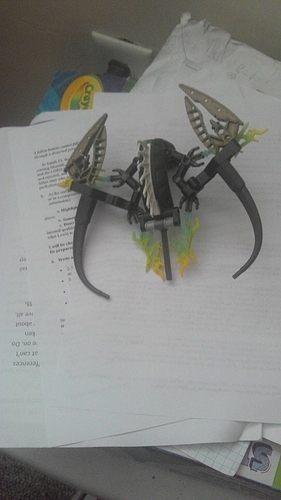 Note: A MOC of Arutang is coming soon, as well. Also, better pictures will come as soon as I can take them.

The MOC works, I guess, but to get it accepted I would ask you to take better pics of it - because of the lighting. Try putting the lamp behind you while you take the picture or - even better - go outside and use daylight. Because it’s really hard to tell the colours apart or see details.

To the backstory:
I do have quite some issues with it, unfortunately.

And the whole Second Empire thing:
It is ok that he hid somewhere in the south and made some Toa and such follow him(Makuta can be quite manipulative, after all), it even is ok that he called his little project “Second Empire”, but this:

But, eventually, when his plan was about to go completely into effect (when the universe was in his grasp),

Doesn’t work for me at all and goes way too far. There’s absolutely no way he was actually in a position that might have enabled him to achieve his goal. He might have dreamed of it, but never, never, never this. Especially not with his base somewhere no one ever travelled.
That reminds me - since the southern regions are pretty much no man’s land, how is it there are Matoran, Toa and Turaga there?

As to his death - it probably happened before Shadow Matoran came into existence, so here’s a suggestion for an alternative: Makuta Jormuntrax, the Brotherhood’s Master of spies, somehow located Kohuru and killed him - or had him killed as a traitor and a danger to Teridax’s plans.

So, everything I said is more or less open to debate, but to get this MOC accepted there are quite some things that need to be changed. Most important are the pictures and the whole “Second Empire” stuff ending with Kohuru’s death.

I will make some edits to the backstory, and take better pictures. I had his death the way it was because if I remember correctly, you said something about there being too many Makuta being killed by other Makuta. Also, the Toa and Turaga that he manipulated weren’t in the south- he just made the island his base of operation. Also, sometimes his cohorts did go to his island base, they just told no one because they believed they had no reason to (thanks to Kohuru’s mask power) until that one Turaga. Also, when I refered to the Turaga as powerful, I was more referring to their sphere of influence. And the staff’s name was my brother’s suggestion. I can change it if necessary.

Ok, just take care to tell me when you have made the changes.

Yes, I did say something about no more Makuta killed by Makuta, but it was just a rule suggestion and some feedback changed my mind regarding that a little.
There will be more in that regard soon, but for here it is most important that Kohuru dies in a possible and believable way. If he dies through a Makuta, then through one that I can believe has something to gain from Kohuru’s death.

Oh yeah, and could you perhaps change the name “Mask of Masking” into “Mask of Deception” or something such, because I feel like “Mask of Masking” sounds a little odd.
As to the staff - I’m honest, it probably won’t be mentioned anywhere in the “Book of the Brotherhood”, so I don’t really care about the name - just found it funny in a ridiculous way ;).

So, as I said, the most important things to edit are the whole “Second Empire” thing and Kohuru’s death.

By the way - what do you consider the “First Empire”? The League of Six Kingdoms?

Actually, second empire is a reference to the fourth empire in Atlantis Found by Clive Cusler. Also, excepting pictures (which will come soon) the post is updated.
@Hutere What part specifically? Arms or legs or both?

In what way? Because if you think the upper arms are too short, they’re actually the same length as the lower ones, they’re just covered partially be the shoulder pauldrons.

Well, most of the story works for me now, except this part near the end:

A fierce battle ensued, in which Jormuntrax managed to tear the mask for Kohurur’s face, and interrogated him, learning of his entire plot to over through the universe. Jormuntrax brought him back to destral, where he was executed by Teridax himself for his crimes against The Plan.

So, yeah, solve that first issue and the backstory should be ok.

I find the pelvis too narrow, but I like the colors.

I love the name staff of ridiculous power

Thanks!
@LurkingEhlek, yeah, I can see that, but I kind of had a choice- proportions, or solidness. I chose the latter. 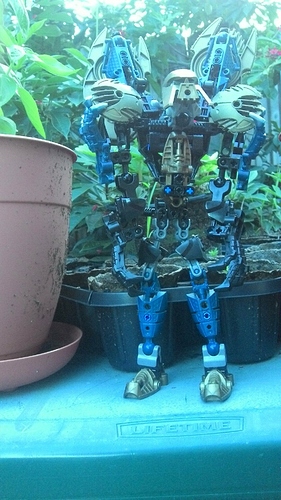 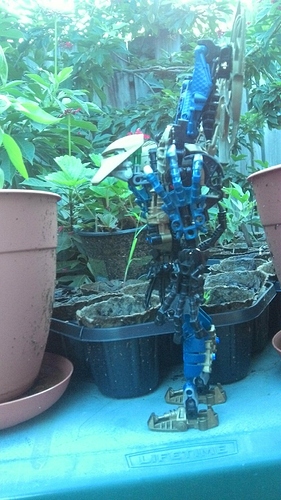 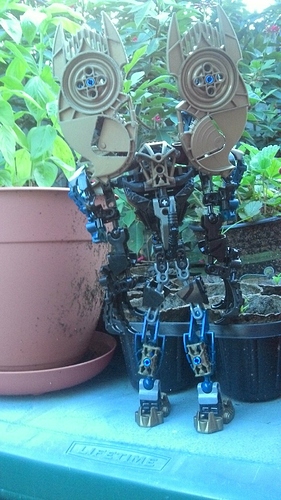 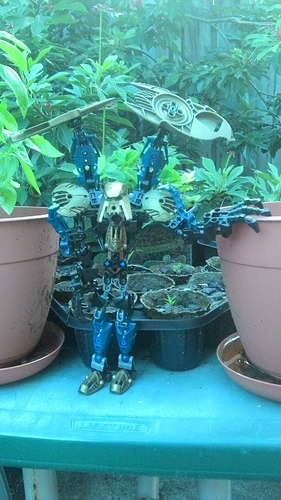 The lighting on these is still not ideal, but at least I can make out the MOC’s build now.

Seeing as you have two accepted MOCs already, I’m going to be a little more demanding in terms of the build of this one:

The hips aren’t very good looking and really limit leg articulation, also I can’t say that I like the legs themselves too much. Perhaps try making them fully custom?
Same goes for the arms. I feel like the lower arm armor doesn’t cover the forearms very well and the claws on the upper arms seem to stick out a little much and also to get in the way with the shoulder armor.
I like the use of the Hagah shields as wings, but connecting them with only one pin and thus enabling them to rotate freely doesn’t seem a good decision to me. Perhaps try to better secure them - and maybe try to add the Rhotuka function, I think that would be quite nice.

Otherwise a more custom torso would be nice to see, if not necessary.

Okay, I’ll work on the limbs. However, the haga shields are actually quite secure already, but I’ll see what I can do about the Rohtuka function. His torso, however, I shan’t touch. My main goal with this MOC was to make the '08 Makuta torso, and I think I succeeded.