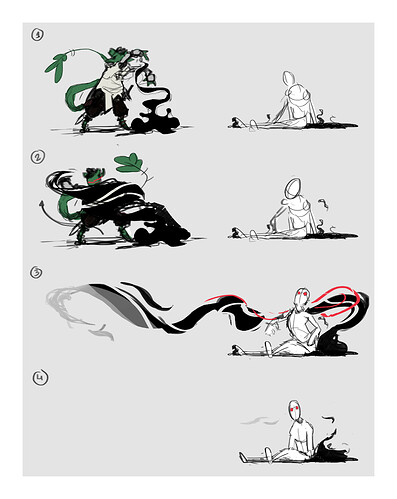 So, my original plan with Connie was to really play up the adorable-on-the-outside/scary-on-the-inside trope. Outwardly, Connie was meant to be cute, friendly, and excitable, but every so often he would have these really dark moments where he says or does something creepy.

At first, I wanted to try and achieve this through the Glamour bard subclass. Glamour’s whole thing is the dangerous power of enchantment, bewitching others to do one’s bidding through power of voice and appearance. I tried playing to that, with Connie’s “good” side striving to be understanding and persuasive. Essentially, I wanted Connie to be that character who is just so pure and innocent that even the bad guys want to listen to him. But I really liked the moral implications of Glamour, so I wanted Connie to struggle with the darker side of his powers; after all, he could get whatever he wanted if he charmed his way through everyone’s minds, to the point he could even directly control people.

But over time, it became harder to maintain that vision. Another character in my party became the naive, talkative, semi-annoying one, so I had to pivot Connie away to being more tactical and intelligent. That went hand-in-hand with his struggle to do well in combat, which led to him becoming predominantly a rogue. Connie is now much more into the “darker” side of his character, and I’ve recently changed him from a Glamour bard to a Whispers bard.

Whispers is all about the shadows. It’s about using darkness and fear to manipulate and deceive. It still retains a lot of that original flavor for Connie, but in a bit of a different way. The problem was that Whispers’ main ability involves using a person’s shadow to disguise yourself as that person. The bigger kick is that person has to be dead. Connie is a sneaky kid, but I never wanted the whole “disguise” angle for him. So, my DM and I worked on a new version of that ability that fits Connie better.

Now, Connie can hide in a person’s shadow (and thankfully, this can be anyone he’s charmed or who is unconscious) while simultaneously controlling their mind. Using this, he can use other people’s abilities or he can gain their knowledge. Connie recently used this to find out who an enemy was and what their motives were for attacking us.

Anyways, I just wrote a book for what amounts to a small bit of concept art. I just really like yapping about D&D.

Here’s a cookie for you if you read any of it:

as everyone should in order to maintain a healthy lifestyle.