In response to this week’s podcast, here are some ideas for masks and how they function: 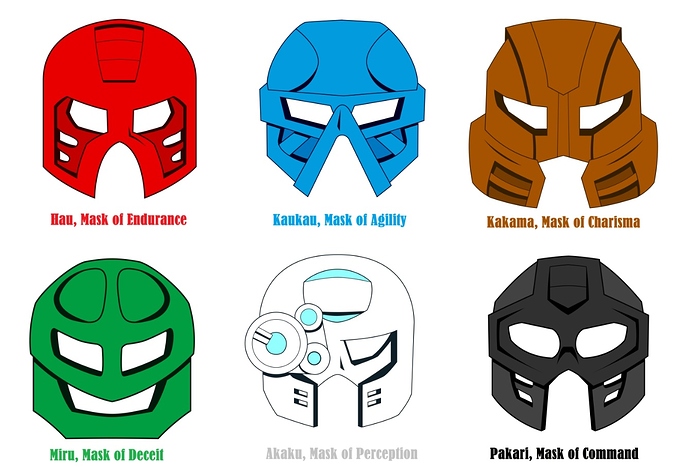 ###Summary
This pitch proposes that masks come in four forms, as in G1: Powerless (Year 1), Noble (Uncovered Matoran masks), Great (Toa-exclusive masks) and Legendary (confined to the mask of Time and those worn by the Great Beings).
I have also put forward ideas for individual masks, which in their Noble form provide ‘passive’ (i.e. constant) boosts to performance while Great versions can also provide more active (i.e. intermittent) boosts.

The following mask powers refer to the Noble versions, with the additional powers provided by the Great versions indicated.
Powers bestowed by Great masks can only be used every five minutes (or more depending on the usefulness of the power)

In response to this week’s podcast (SENPAI NOTICED ME), here’s a pitch for the mask that would allow the Ga-Matoran to inhabit the ancient underwater city:

Liking your idea for the mask, though I think the Mask of Charisma would be fitted with Calix. Kaukau could still be the Mask of Water Breathing, it would give its user the ability to breath underwater for a limited time (lets say 5 minutes, than wait another 5 before reuse)

Very well done. I like how you made the masks about how people want to portray themselves, as is often done with clothes (edgy people wear black, business people suits, etc). Matoran might even think these people own these characteristics, as they link the mask/face to it (this is a topic discussed in social psychology, however my knowledge on that is limited). The mask and their powers are really well made. I like the passive and active part of the masks. My favourite part of this pitch is that different masks are worn by the same “jobs”, otherwise the character landscape would be pretty flat, as all labourers )which are often in abundance) would wear the same mask.

I should also add: with this pitch and how the podcast planned on introducing powered masks, the Toa would start off with powerless masks (that simply obtain ornate symbols because of their transformation), but once they uncover the Noble masks, they will gain these mask powers - this could serve as a substitute for a Nuva-style upgrade like G1.

After mentioning that the Ga-Matoran could have once inhabited an underwater city, I added a pitch for another mask that could allow them to do so.
It’s at the bottom of this topic.

I’m really happy about this pitch because you’re essentially doing the best of both worlds; going the route of physical augmentation, but with the concept that it can be upgraded to the more traditional, superpower-like mask powers. Also, it maintains the hierarchy between Matoran and Toa, since the mask only reaches its full potential if worn by Toa.

I’ve made a similar pitch recently about the masks and how they are made, although the mask makers remain anonymous. I preface that I used G1 masks (which are not canon in G3) just to give a general idea (and to entertain myself).