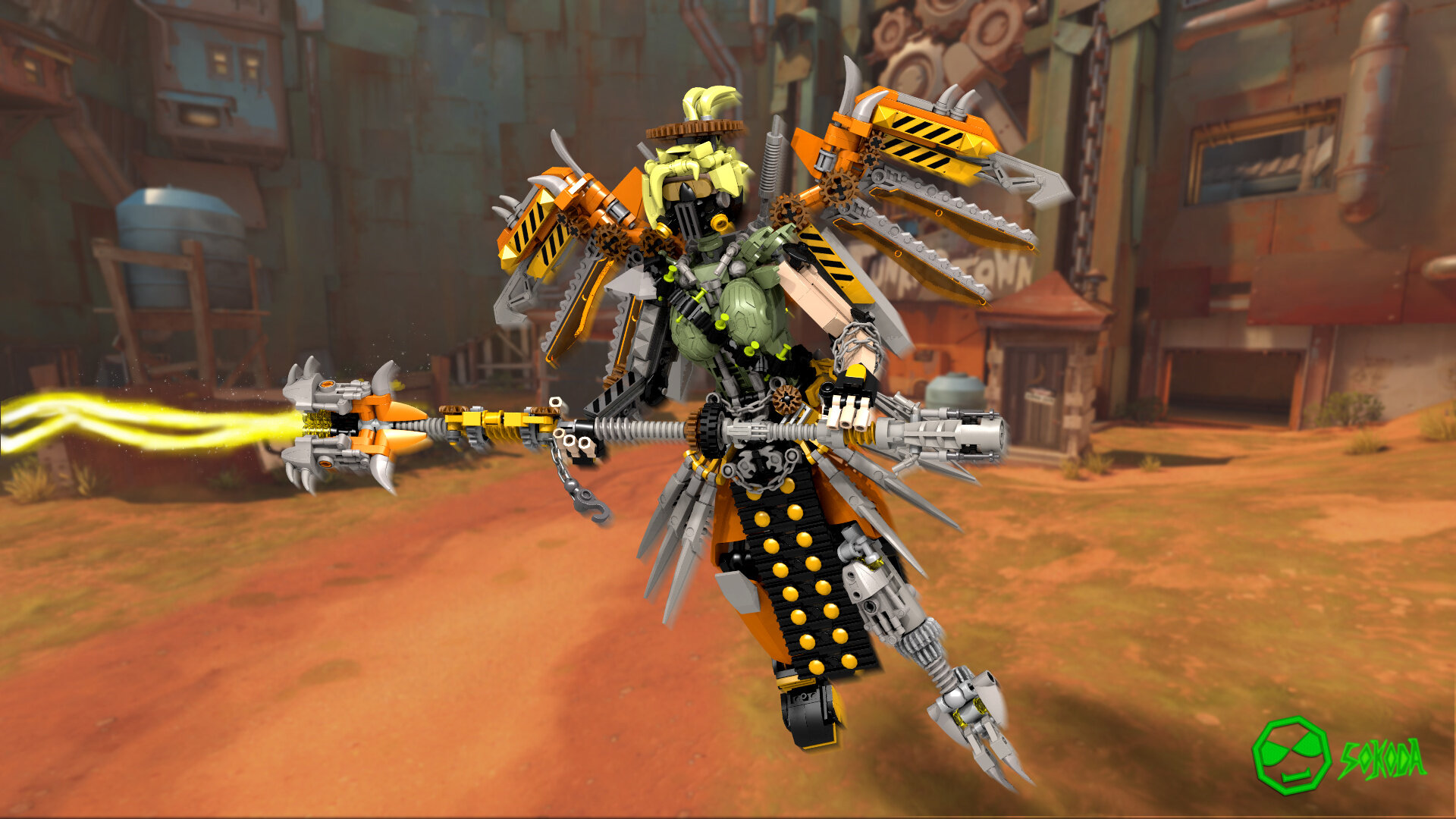 This is my entry for the Lego Ideas “Show us your Junker-inspired interpretation of an Overwatch hero!” contest.
I put a lot of work into this one, becaues I definetely wanted to enter this contest, because I’m a huge Overwatch fan and of cause love building Lego.
The theme of the contest was to build a brick built version of a Overwatch hero redesigned as a Junkertown character, which allowed me to combine system CCBS and Technic/Bionicle for this model, which I always enjoy. 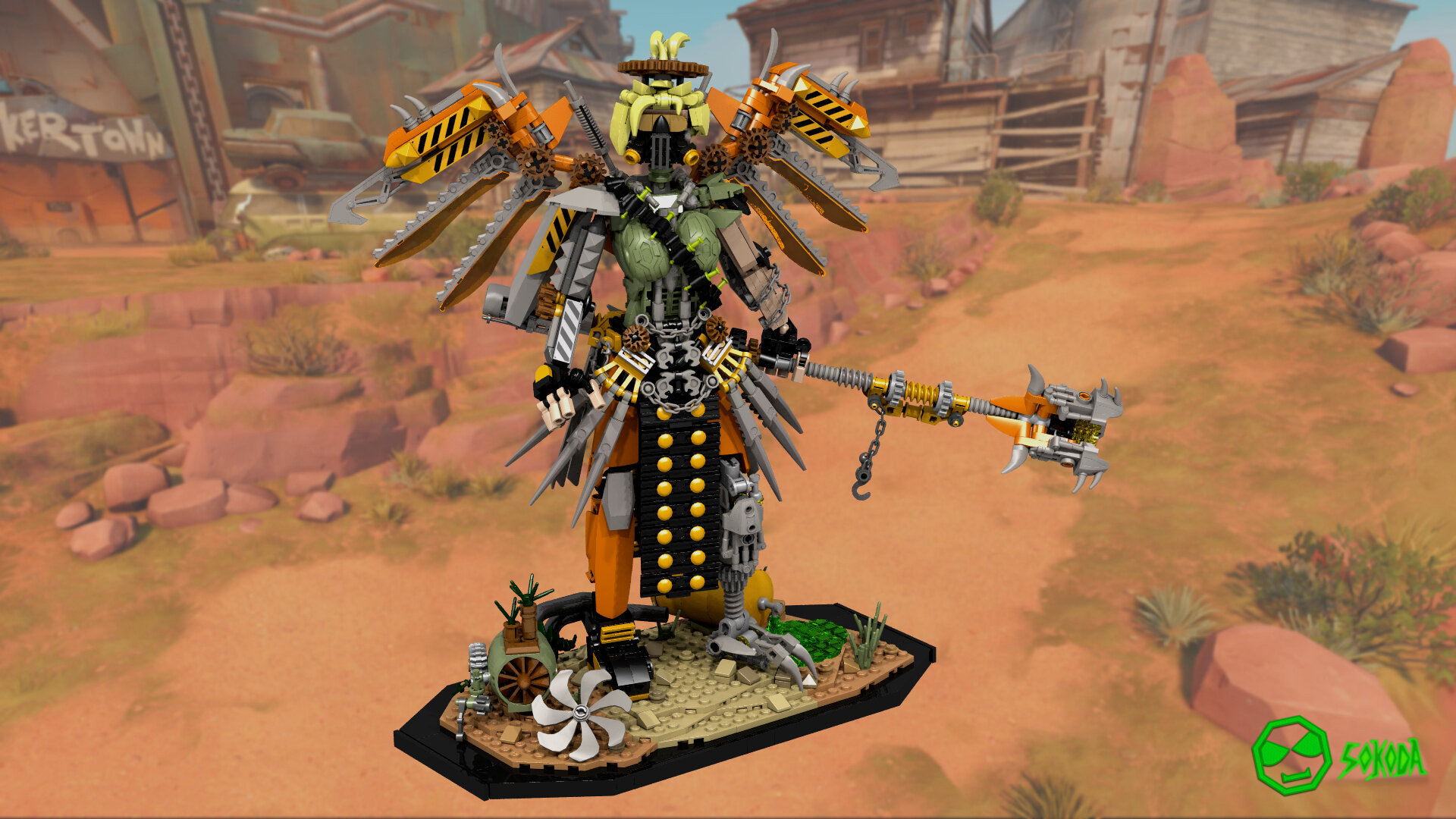 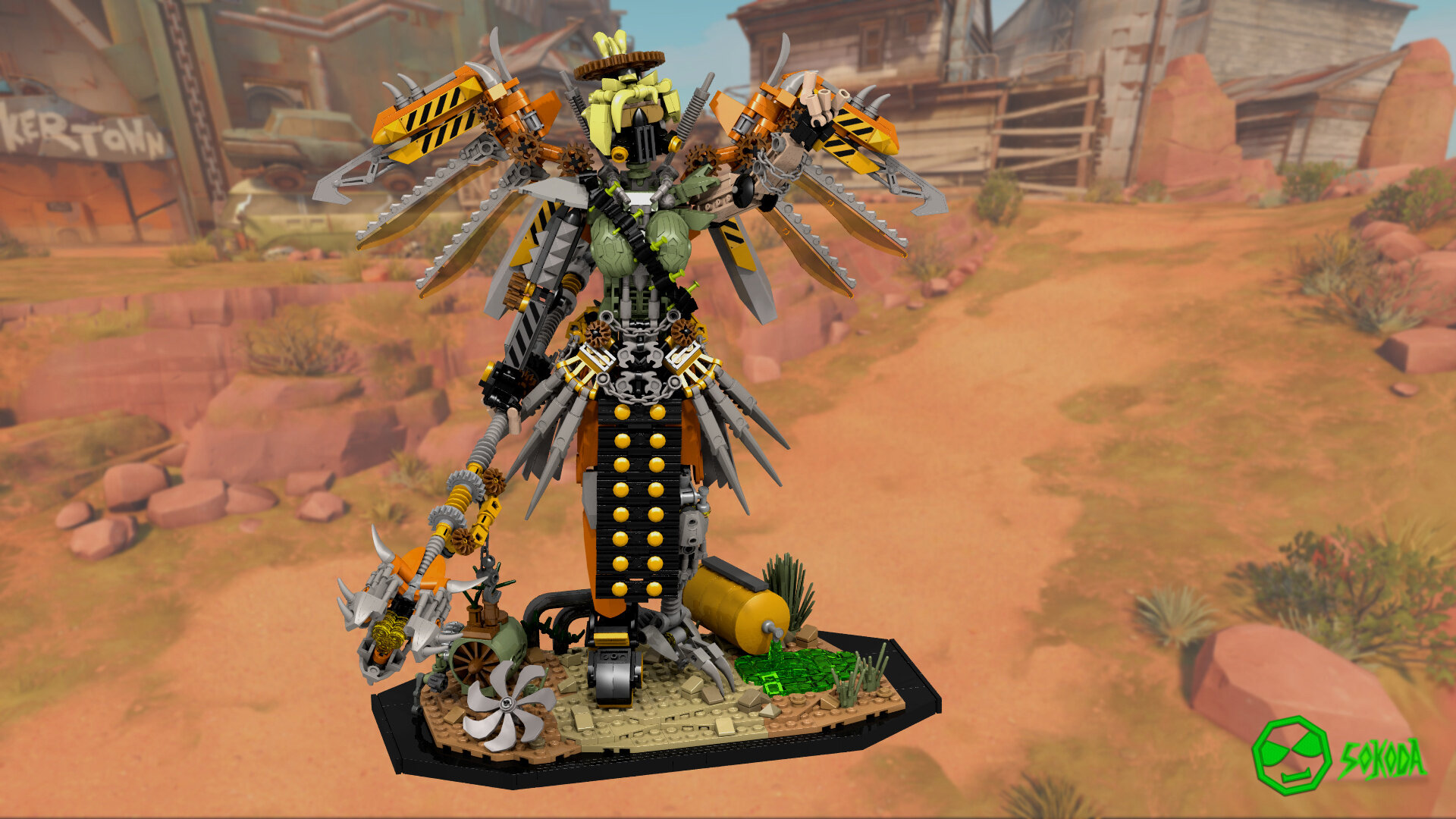 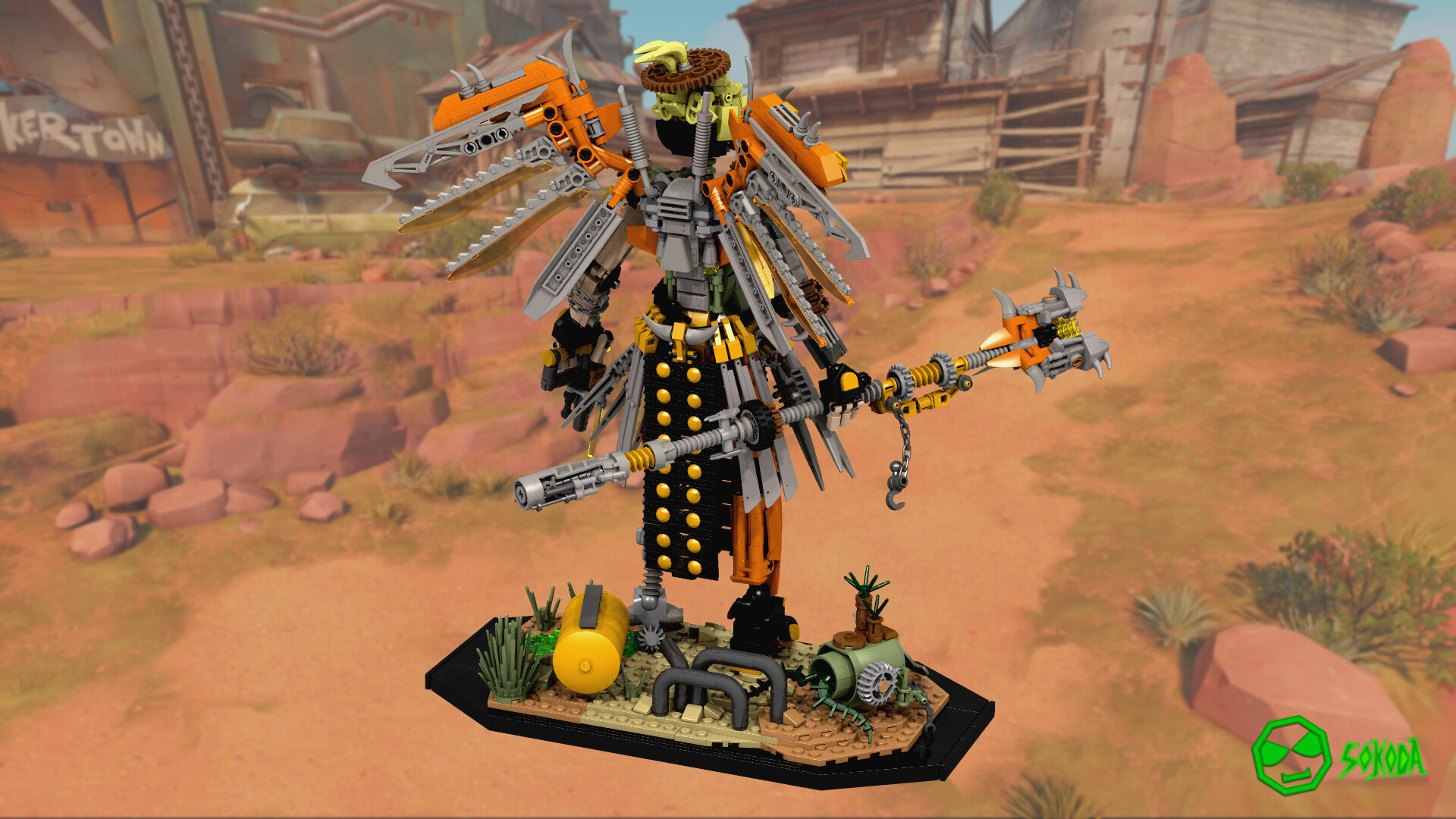 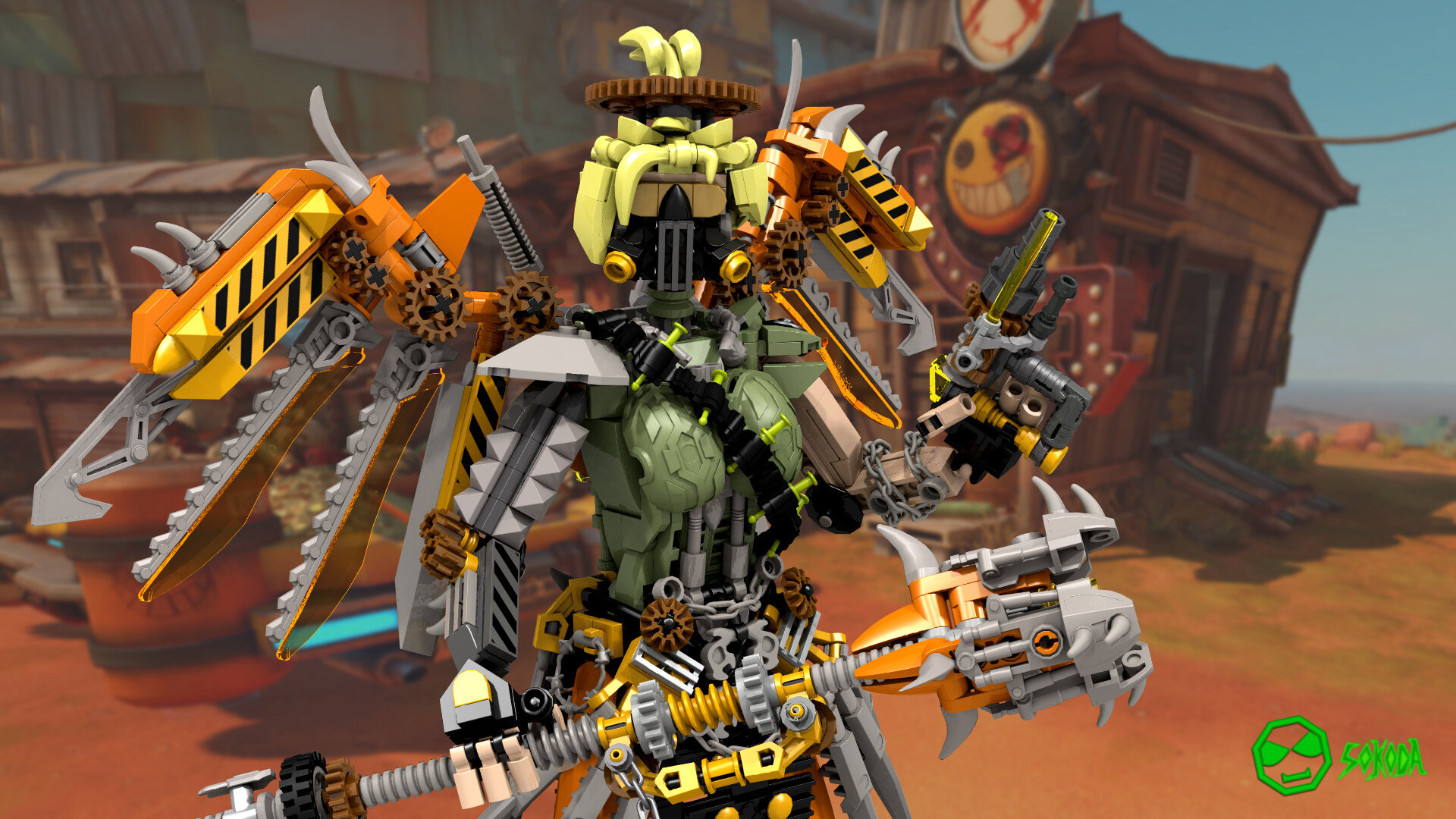 My initial sketch before I started building, of how I wanted this model to look: 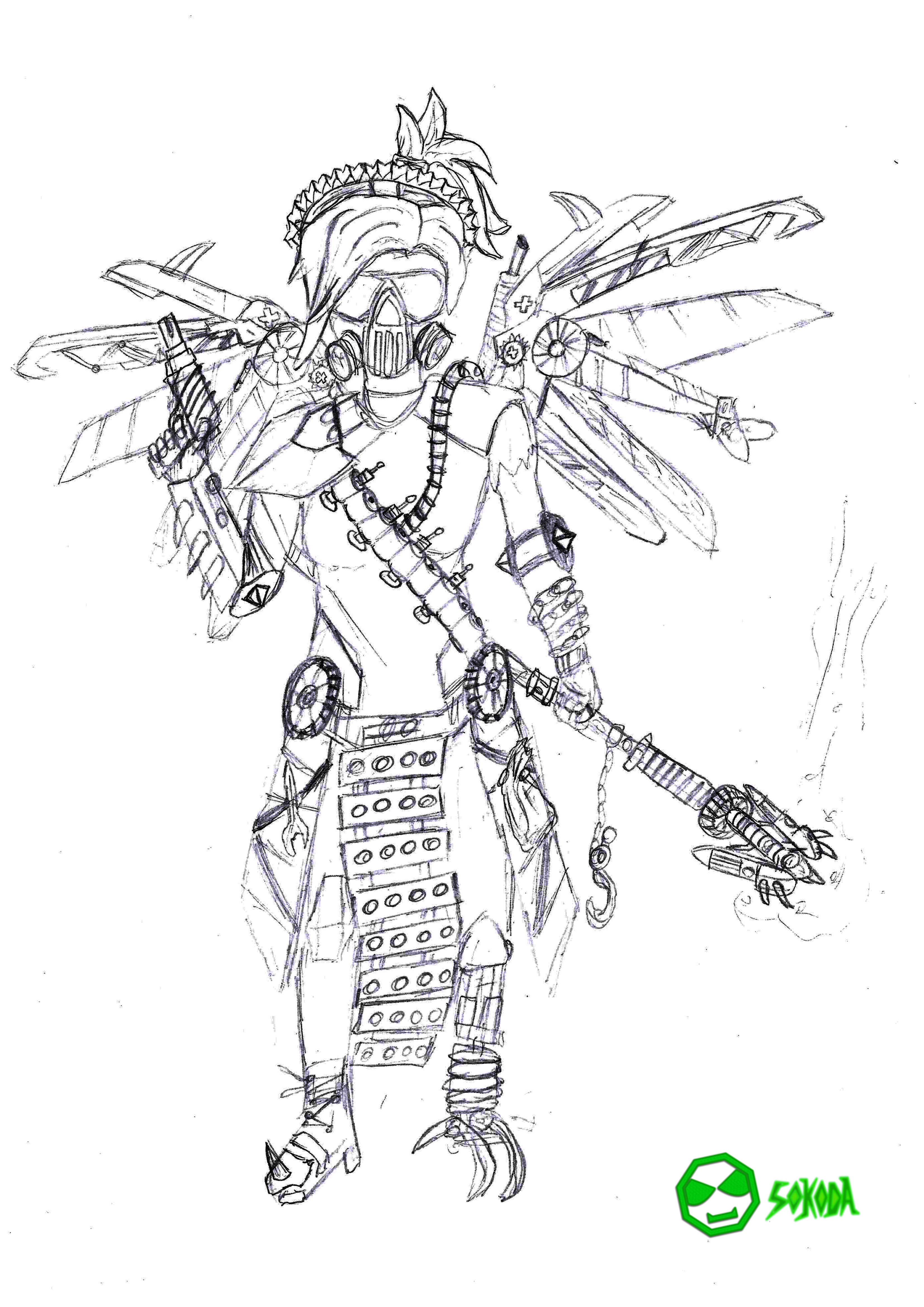 In an alternate reality:

Lost in the Outback with no way to communicate with Overwatch mission control and a damaged Valkyrie suit, Mercy came across Junkertown. But when she saw the dangerous mech-battles in the Scrapyard, she knew she had to help the people there.
Healing wounded fighters and building a new Valkyrie suit out of scrap, she began a resistance to overthrow the Junker-Queen and end the arena fights once and for all.
She would show no Mercy until the terrible reign of the Junker-Queen was over…

For this contest I wanted to reimagine Mercy because she is my favorite character to play in Overwatch. I really liked the idea to build a rather menacing looking version of a character that is normally very friendly and caring.

In her design I drew inspiration from the Junkertown characters we know, like the gas-mask, a ripped of sleeve a prosthetic leg and the gears found all over Junkertown.

I hope you like my entry and thanks for checking it out.

Wow, this is really awesome!
I hope you do well!

Ok, so whoever wins this contest will have it’s MOC become a set for or something?

This is awesome! I love it so much!

Ok, so whoever wins this contest will have it’s MOC become a set for or something?

No, you win every single LEGO Overwatch set and more.

Breaking news: Local Overwatch hero Mercy has absolutely lost it, and decided to join forces with Doom Guy in fighting off the forces of hell.

Jokes aside this looks great. Wheather or not the Doom Guy similarities are intentional, I really like how it looks.

I really hope this MOC will be the winning one!

Thank you, Doom guy wasn’t really an inspiration behind this, but I’d love to see a teamup^^

Looks awesome! Lets hope you get far in the contest!

Sodoka once again gracing us with top teir mocs.

I hope you win Sokoda this is a great idea. I’m amazed you were able to make this work for Mercy but as always you never disappoint.

Thank you! I put a lot of work in this MOC, but there are a lot of really awesome entrys in this contest, so well see who will win.

I’m really upset that this didn’t even get an honorable mention… That’s too bad. Well, good luck for next contest!

The entrys that won are really great, so were the honorable mentions. There were a lot of really good entrys in this contest overall.
And thank you I’ll definetely enter more contests in the future