Hello there! Welcome to my second MOC, for my Metru Nui War MOCs (the first one can be located here: https://board.ttvpodcast.com/t/metru-nui-wars-moc-toa-katli/20362 )

So here it is. My first Dark Hunter MOC, who is codenamed “Monster” 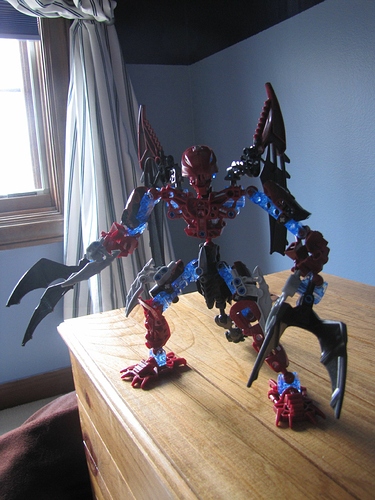 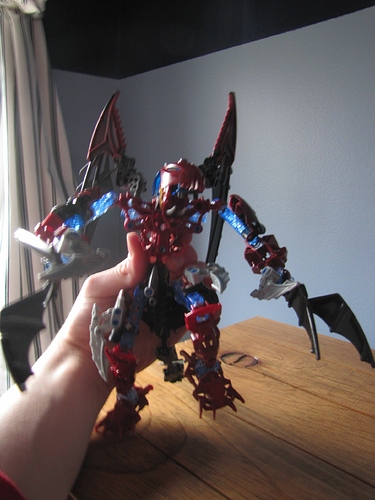 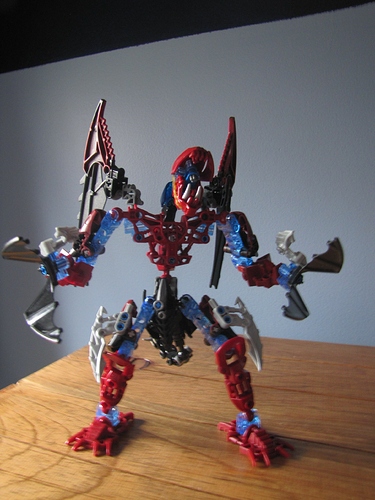 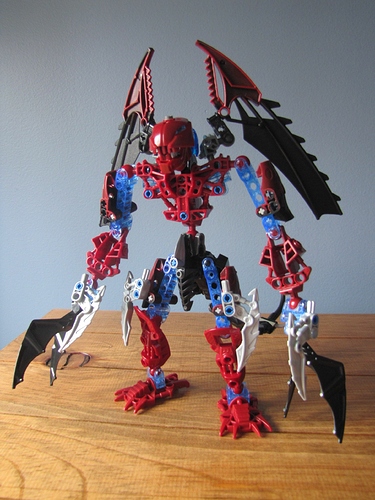 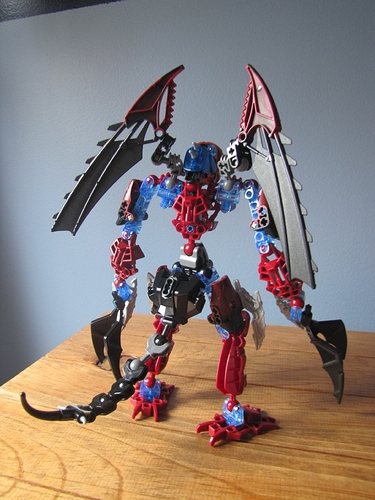 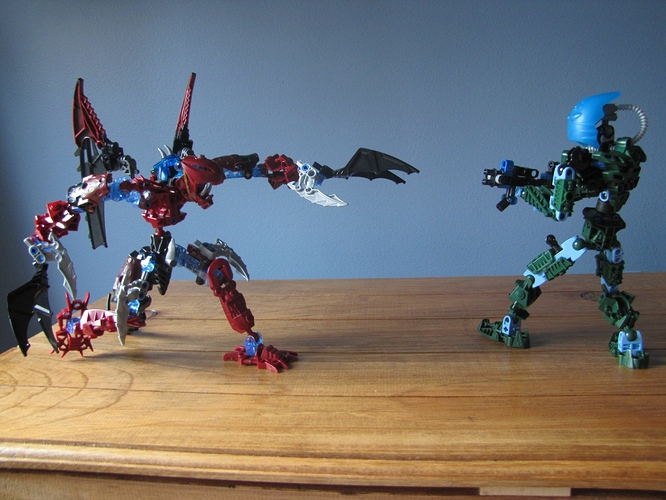 So yeah. A quick biography:
Monster was originally a rakshi of fear (turahk) who was guarding Makuta Teridax’s rahi’s experiments. Let’s just say that the rahi broke loose and a few of them ended of knocking the rakshi into a pool of energized protodermis and falling in themselves. Monster was the result. He managed to break out tof Teridax’s base and ended up being subdued and captured by a team of dark hunters in a mission. Long story short, Monster ended up being a dark hunter after that.

He is a ravenous and ferocious brute who relies on his brute strength, limited, but formidable, intelligence, and instinct to survive and get through missions.

His powers consist of that of the rakshi of fear, as well as enhanced flight abilities, a powerful tail, added armor (example: knee spikes), as well as the power to launch/release pure fear energy through his claws (king of like force lighting in Star Wars).

Well, what do you guys think? Do you like it? Do you like the design/build (It’s an Inika build by the way)(and yes the rubber band around the head/jaw is necessary to keep it closed)?
Constructive criticism and comments are appreciated.
Thank you for looking!

The red and blue seem to go well together, though the grey bits are a bit off throwing.

Nice Job on it and I liked the Bio,too.

I’ve only been mocing for a year or so, so the best I can do confidently is comment on color scheme.

This MoC is a simple one, but it flows together so well I can’t fault it.

When I first glanced at it, I literally flinched in fear at those claws. And when I saw the jaw open, shudders

Cool!
This is a solid MOC. It overall checks out. I especially like the head, talons, and unusual color scheme. While the build seems a bit off in terms of the wing connection and how it looks like an average Inika build at first glance, it’s a very nice MOC. Good job!

Red and blue is an interesting colour scheme but this MOC manages to pull it off fairly well. Only critique i have is the waist, as it seems very thin - i feel that if this were fixed it would look a little better.

Man this thing is simple but groovy. It flows so well.

Thank you all for responding! (I’m on a mobile device, so I can’t @ anyone. Sorry!)

If anyone would like to know. These Metru Nui Wars MOCs of mine are simple because I am going to build an army of Toa and an army of dark hunters, so I’m trying to save on parts.

Edit:
@PekekoaOfJungle Thank you!
@theBolderBoulder Thank you as well! As for the head design, I thought of it when I saw the bottom jaw piece, but only implemented it into a MOC now.

I love the articulated mouth.

I agree! That makes it better than just using the plain Rahkshi head.
I also like the unique color scheme as well.

Good concept, not so great execution.

I appreciate your opinion @renki_peka but you have not given me a reason as to why you think the idea was poorly executed. Please do so, as I would like to know if I could make it better.