In episode 234 of the TTV Podcast, a lot of discussion went down as to the nature of the Rahkshi in their hypothetical G3. Some concept art on the topic was discussed and an invitation for more extended; I decided to have a go at re-designing the iconic '03 villains myself. Just a quick, crudely colored set of sketches and little descriptions. 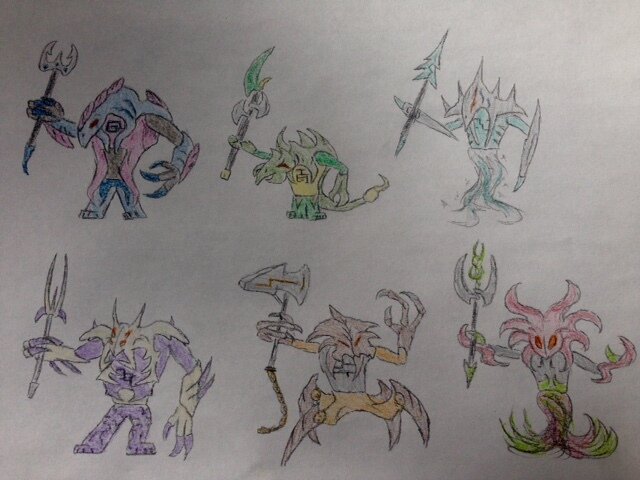 Guurahk: This large Rahkshi is slow and blundering on land, but an unstoppable force underwater. Its staff of disintegration can melt down even the toughest of metals

Lerahk: Don’t let this pest’s short stature fool you. He is extremely sneaky and quick, leaving trails of toxic gas wherever he goes with the help of his staff of poison.

kurahk: An unmoving ice statue one moment, a fearsome fighter another, this unpredictable Rahkshi wields the staff of anger. He does not enjoy the other Rahkshi’s company.

Vorahk: This bone-encased brute doesn’t wield the fork staff of hunger for no reason. His insatiable appetite for everything that moves makes him the most relentless Rahkshi

Panrahk: This creepy crawly simply loves the sound of destruction. With his mighty hammer of fragmentation, he will wipe out entire villages just for the fun of it.

Turahk: A master of ambush, this Rahkshi travels above a thick misty smoke, spreading fear to those around him - even other Rahkshi! If that isn’t enough to scare his opponents, he spreads out his frill to intimidate even further

I really like the variety here. The varied proportions and statures made possible with pieces like Axls torso is an interesting direction. However Panrahk and Vorahks faces don’t really look strike me as Rahkshi like compared to the more serpentine heads of the other four.

These are interesting and cool. However, they vary so much from each other and the original rahkshi that they cease to be rahkshi and become something new altogether.

Guurahk: This large Rahkshi is slow and blundering on land, but an unstoppable force underwater. Its staff of disintegration can melt down even the toughest of metals

Perhaps I had tried too hard not to make them clones…

I agree that there isn’t one clear distinguishing physical characteristic that can be pinpointed to illustrate that they’re a unit (aside from general spikiness and armor layout).

These are cool. Very different from the Rahkshi I drew, which I will be posting as soon as my camera lets me do that. 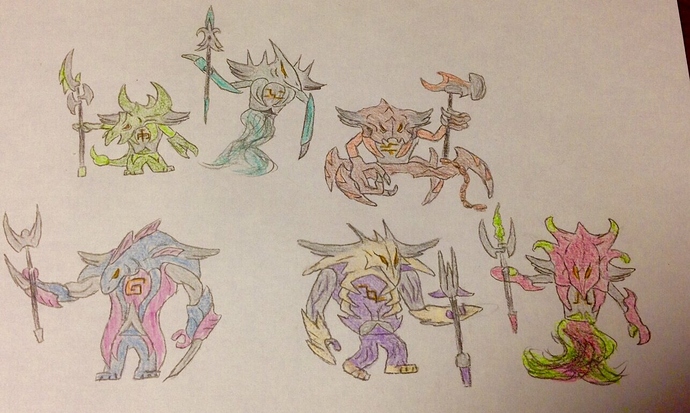 Redrew them- main addition were the shoulder guards which swoop upwards on the sides of the Rahkshi’s head molds. These would be all molded in silver to represent the grey shoulder guards that were present in the G1 Rahks. Not sure if it helps to tie them closer together…but they do make them appear regal to an extent imo

I think it would make more sense if the Rahkshi were in fact parasites; if the Kraata were creatures that attached themselves to other creatures and mutate them into more dangerous creatures under Makuta’s influence -like the corrupted kanohi, but when they attach to matoran, the Kraata mutate them into Rahkshi, adding more weight to their presence