JSo, as I’m disappointed to say, when G2 came out I never really managed to get many of the sets, only really buying Lewa and Skull basher.
Which, in truth, the only reason I had either was due to an attempt to get the most out of bricklink orders shipping prices.

So yeah, very limited selection when it comes down to G2 only parts. But, that doesn’t mean I can’t build anything!
No, in truth that just opens up challenges to myself!

Such as re-creating Tekan in a G2 form! 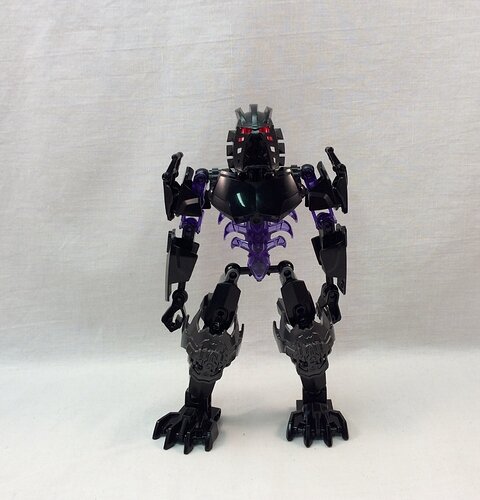 Now, while he is a fairly simple build I am pretty happy with him. He’s fairly smooth and his colours work well together, in basic just a simple, standard build moc.
Which does work well for a G2 based Toa

Now I do plan to give him later mods, replacing his upper legs with clear versions, making him a bit taller, bulking him out a bit more, but for now I’m happy with him.

Now, onto the story bit/thing!

Really, I don’t have much for him, wasn’t a lot for me to work with (canon wise) due to how abruptly they stopped.

So currently my best idea for his story is that when Makuta ripped open that hole to the shadow realm, when he was fighting Ekimu, he basically ended up releasing a lot of shadow energy (possibly some form of elemental), and once it was released it immediately headed for the nearest viable container/host for its energy, I.e. a skull raider.

After reaching, and entering, the container the energy took control of the body, reshaping it into a more proper form and adapting to ‘match’ with this realms closest inhabitants to its current form, leaving behind a highly confused, amnesiac, and lost, ’master’ of shadows.

I’m kinda thinking he’s more of a happy, reckless individual than my others Tekans, sure, he misses his old world and such, but for the most part he’s enjoying his new world and friends, and he can’t really remember much of his old one anyways.
Also, luckily for him, shadows have yet to be perceived at as evil of a level as in the G1 worlds. Sure, he’ll get some suspicion/dislike and such, but for the most part he’d deal with a lot less mistrust and such than G1 Tekan. 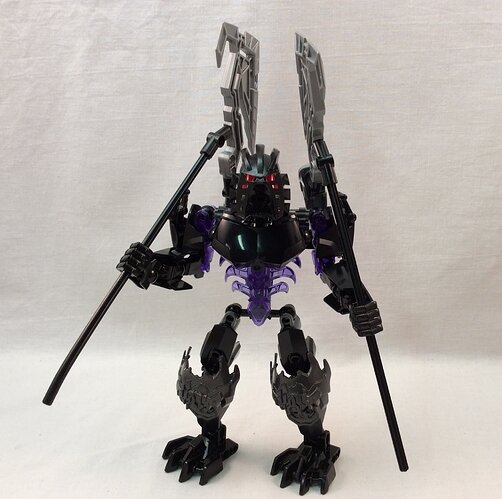 “Now then, you may have your sword and such, but these are what I call weapons!”

So yeah, as you can see I tried to use as many pieces from the sets in his build as possible, such as to make weapons that go (partially) against Tekan’s eternal uses of scythes.
Really, to me, they kinda me think of a scythe mixed with a war-hammer. 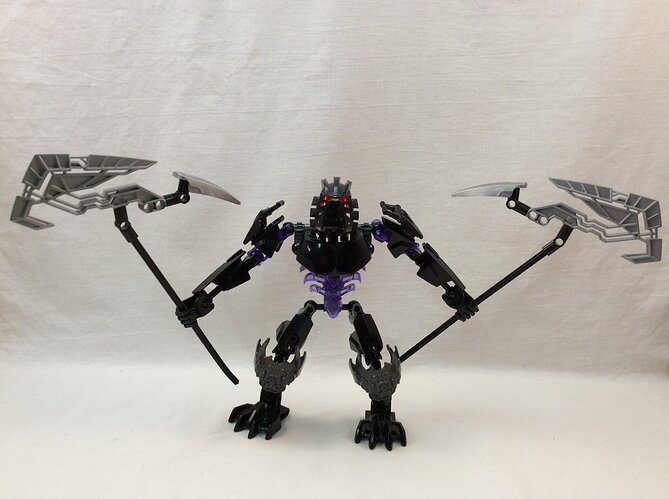 And here’s this little gal! 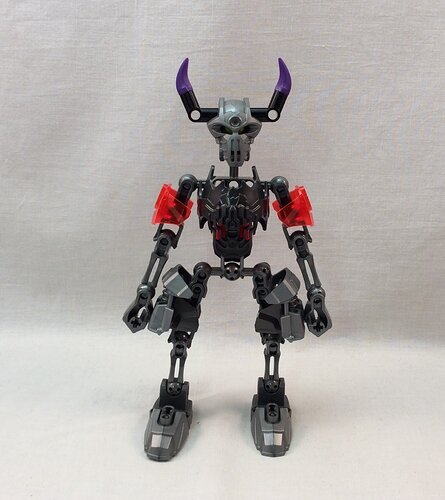 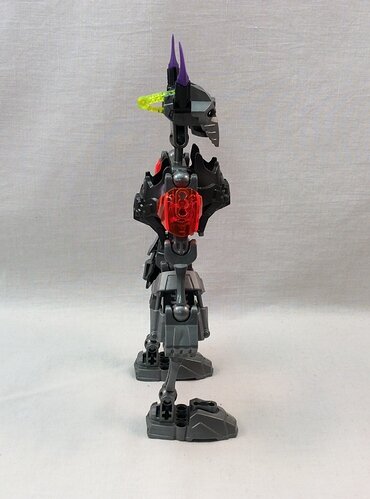 Noticed I had a few leftover pieces and tried to see what I could build with ‘em. Ended up making a little skeleton kid-thing.

Don’t really have much for her, don’t even have a name.
Kinda thinking if making her Tekan’s companion or such though. Also, due to her horns I could probably say she’s somehow related to Skull basher, albiet in a distant way, he’d be somewhere in her family tree… but that would be dependent on what exactly is canon for the Skull raider. 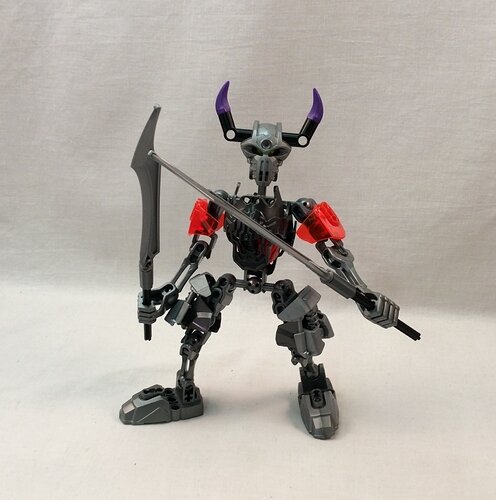 “I’ll warn you once, I may be young but I’ve got plenty of training!”

Now, as I’ve said before, I was attempting to use a small many pieces as I could, so while messing around with Skull basher’s back piece I realized how much it looked like a torso (with a tiny head) from a certain angle… and then I made this little guy! XD 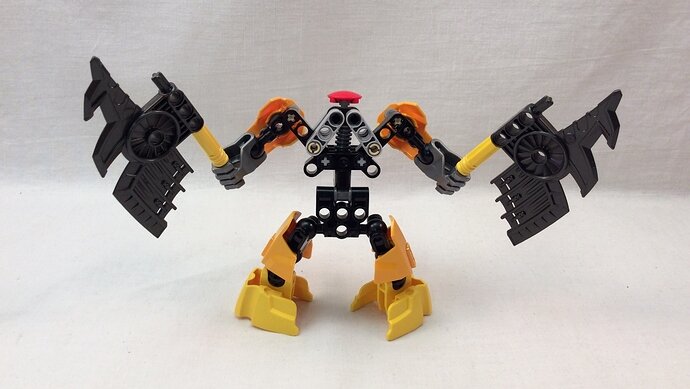 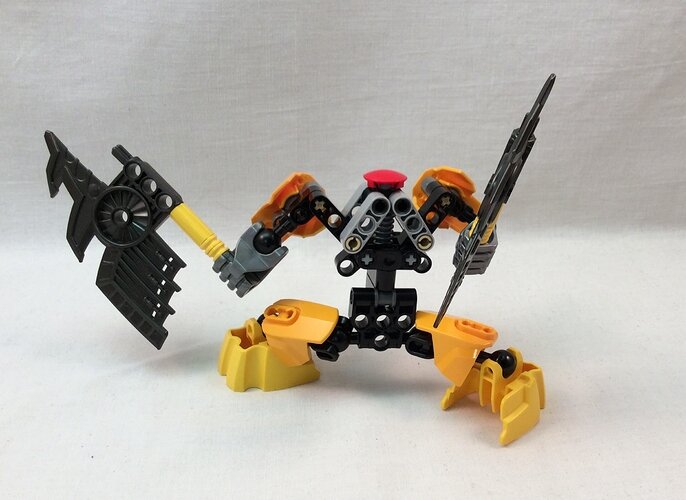 Really, I don’t have much for him. Currently all I do have is that he still probably some kind of sentient guard bot (most likely accidental in that sentient bit) and he’s very grumpy/angry… like all the time… Why must I love him so much? XD

Also, I think he’d only talk in boops/beeps/related… and all of them somehow angry in tone.

Basically he’s not going to be G2 based, I’m going to have him be one of my Discordians, a littleness concept/AU I have planned for my bionicle’s vids and such (once I get to them…).

(And yes, I did sharpie little angry eyes on him! XD)

Next up is another Discordian inhabitant/being. 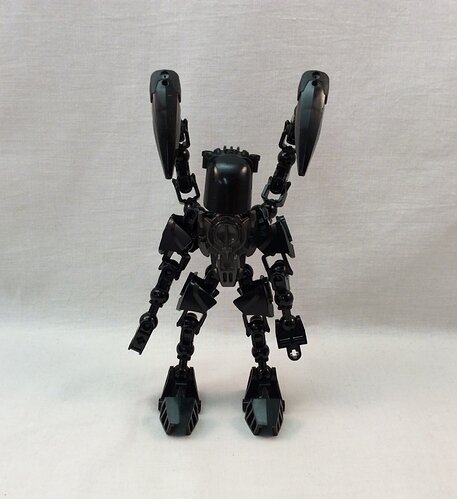 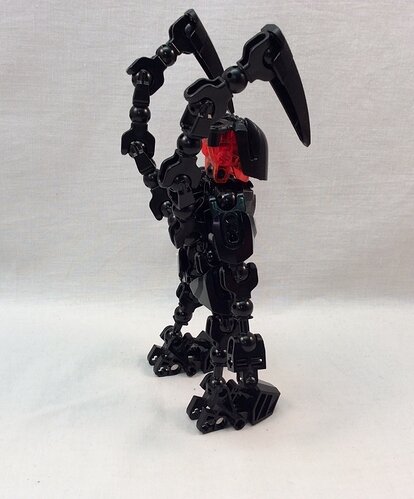 Don’t have a lot for her either, besides being some kind of spider-related humanoid (be that natural or mutation caused).

Gonna say she’d probably be played as some kind of assassin/hunter, something dangerous at least. 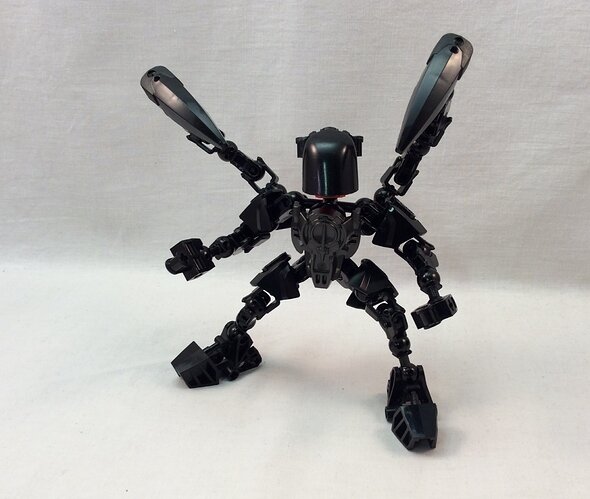 Ah… this one, another Discordian/G2 based moc, but one of my more unplanned builds. 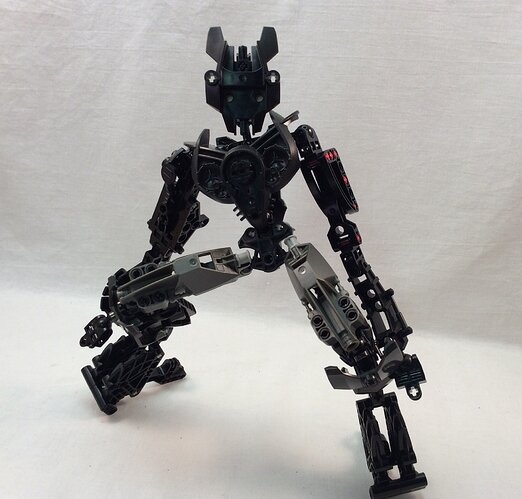 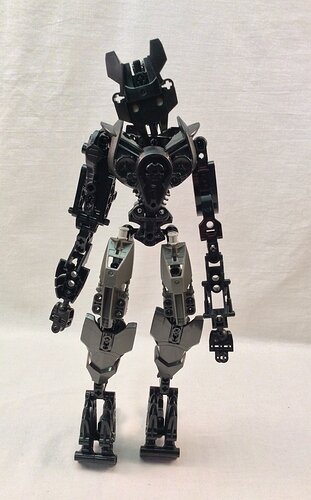 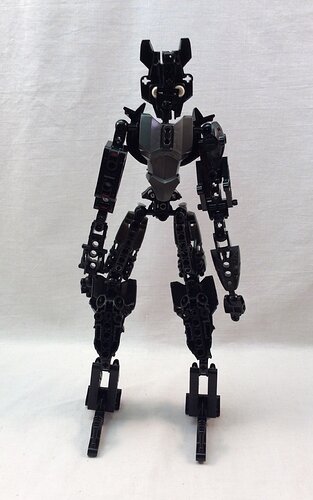 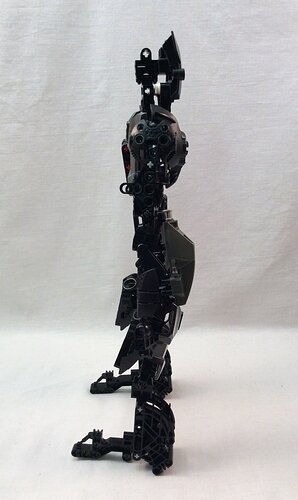 Basically, I’d been going through my parts bin and found a trashed ‘project’ for a very lanky being, so I chose to ‘revamp’ (more like fully restart) it and ended up suddenly becoming obsessed with seeing what I could use those HF foots for, and how to make them work with full HF torso plates as limb armour, subsequently making this being.

Now, for her I have very little info, but from that little info I have enough.

Her name is Shaded, or at least that’s what shes referred to as. I see her as more of a horror story type being, one that’s referred to in rumours and tales and not expected to be real.
Kind of like an Okotan/Discordian Creepypasta in that way if you think of it, but also less so.

She’s known as the forest/night-walker, a being only spotted by those stupid enough to wander within the forests throughout the night, upon foggy days, or to those who try to explore deepest parts of the forest, where the sun no longer reaches, the sounds are muted and a fog is near always seen.

Those who do will find her, a towering being, of lanky form and glowing eyes that cut through the thickest fogs.
One who can hide within the shadows, walk throughout the fog, and spy upon those who let her see them, and never be caught as her form blends with the night, and the fog that follows, at least, not until she wants them too…

In truth, while the description is pretty spot on, she’s much less dangerous than she’s made to be.

She’s just curious, inquisitive, for the most part. She’s one who enjoys watching, learning from others actions, her usual muteness and silent movements helping in that habit. (Perhaps she can speak, perhaps she can’t. She may even always be speaking, but in a way others can’t understand.
Yes it may be… odd, but she is of a differing species and sentience. 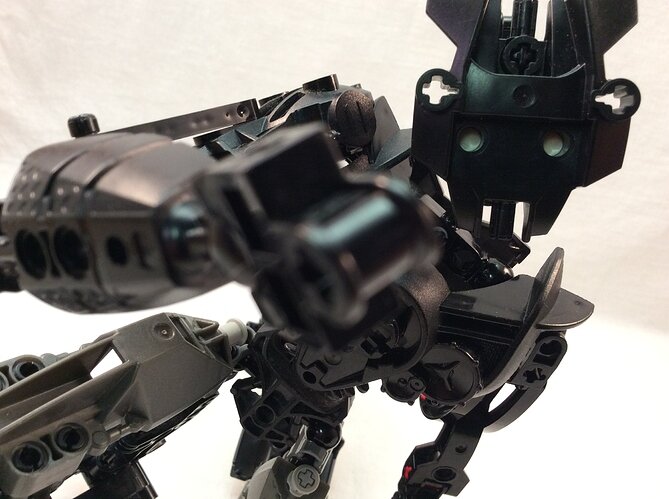 Extra little bit of info, she’s actually around the same height as Titan-Tekan, and even without her custom feet she’s still really quite tall.

Also, is it just me or does the piece I used for her head kinda look like a more archaic/tribal like version of the standard Okotans mask?

Also, final little addition, this really stupid head I made while I was trying to make Shaded! 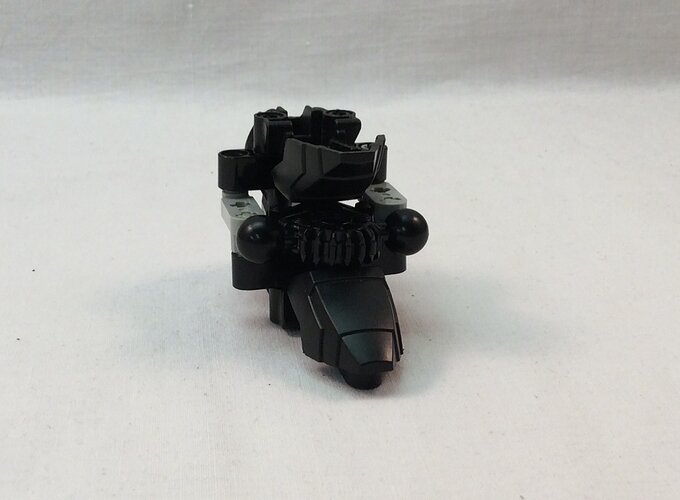 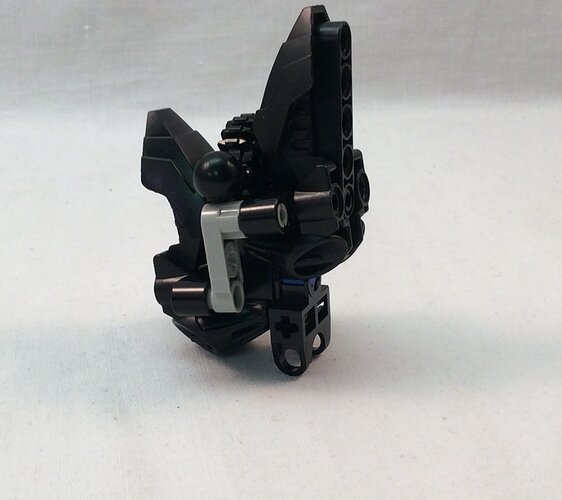 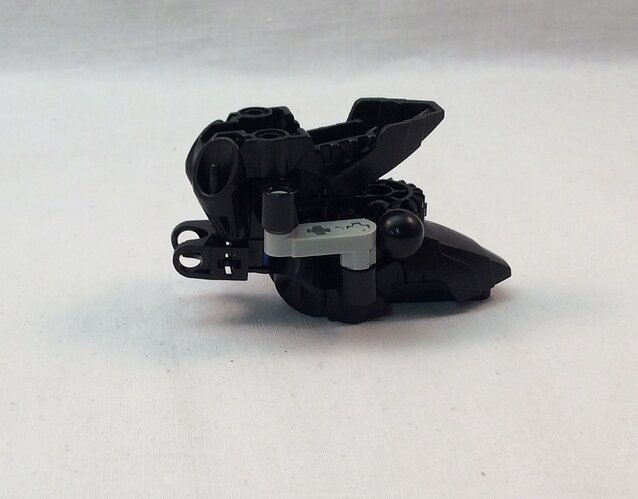 (Does anyone else think it kinda looks it has a pompadour?)

Most of these look good, I don’t really like the skull basher torso MOC though. The rest of them look pretty good, especially the tall Discordian and Tekan.

and yes the final MOC looks like a pompadour

Ey, Thanks! While I was finishing up Tekan I got a bit… not bored, but I wanted to make more than one moc, so I ended up basically table scrapping all the rest of these guys together.

Glad to see you like Tekan and Shaded (they’re my favourites out of the group), and I can agree in the dislike of the skeleton.
I don’t dislike her persay but there’s an… ‘offness’ to her build that I really want to, but can’t, fix.

The skeleton just looks a bit off to me. That is just my opinion though.

Ah, well at least it’s near same with me.

Don’t know what it is about her that seems off, but I can’t seem to think of a way too fix it with the pieces I have…

For the skeleton? I’ll see how she looks then, now if you mean for Tekan, he kinda needs them, both for height and stability.

You should show me what it looks like with the change.

WIll do! I will make an updated pic for her and link you!