Hoh boi, creating a topic on the mobile site.

One of my favorite MOCs. Here's Toa Lenuki from the Island of Kona Nui, featuring gappy hips, bad finger articulation, and other great things! She's the owner of a noble Miru, but she'd rather have a Kakama. She isn't very patient, loves flying/floating around with her sword-wings and helping those cute and tiny Matoran. Her thigh bones might be exchanged for lime ones in the future. Bulsik doesn't get his own topic because he's just too small and simple. Lenuki, holding swords: [image] Swords stored on back: [image] Back (I removed the blue half-pins that hold the swords): [image] [image] You heard me, cute and tiny Matoran; my (favorite and) Self-MOC Bulsik: [image] Interaction: [image] Here's Bulsik again, with his wrench: [image] Lenuki's limb armor was unint…

Here’s the new version of Lenuki, Toa of Air from the island of Kona Nui. 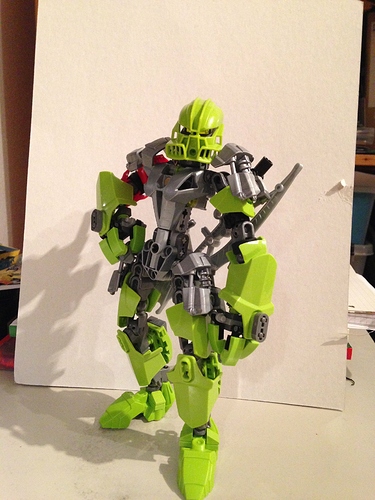 Backstory (at least what I have right now):
Lenuki was a Le-Matoran living in a settlement outside of Le-Koro. She was part of the Voluntary Matoran Defence Force. When the Toa Raki arrived on the island to recrute a team of Toa to defend the islands against the Spirit Army, she was chosen to become one. After the six Matoran were transformed into Toa, the Spirit Army attacked the location were the ceremony took place. The Toa did their best to fend off the elemental beings, but Shoram, Spirit of Fire, caused a big explosion with one of his attacks. The Toa flew off in random directions, and Lenuki landed in Ta-Wahi, a landscape full of volcanos and lava streams, but also geysers and hot springs. She felt very uncomfortable there, and began searching for Ta-Koro, and for the other Toa.

Whew, what a wall. Alright, here are more pictures: 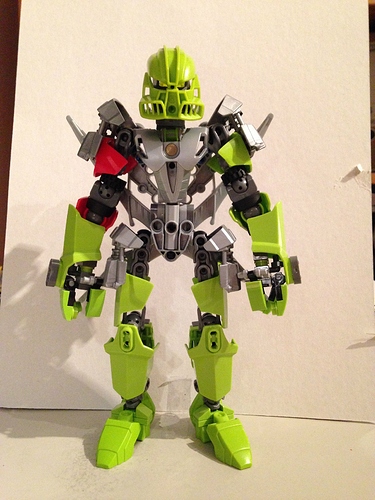 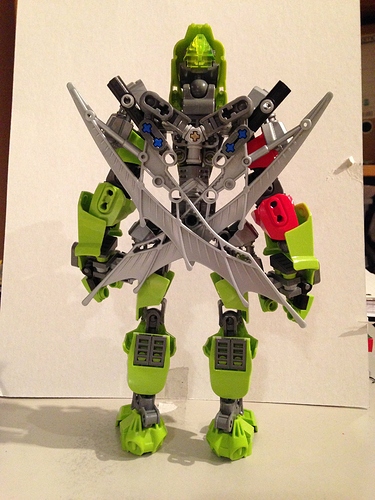 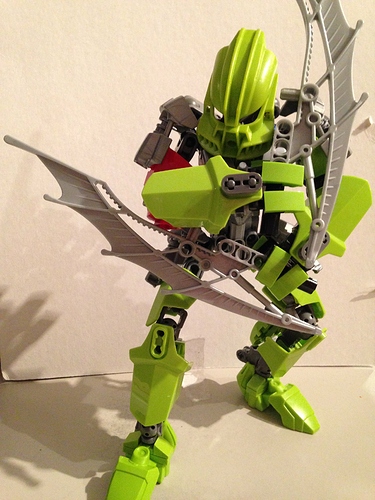 Flying/Floating! (using a technic stand, if you can’t tell) 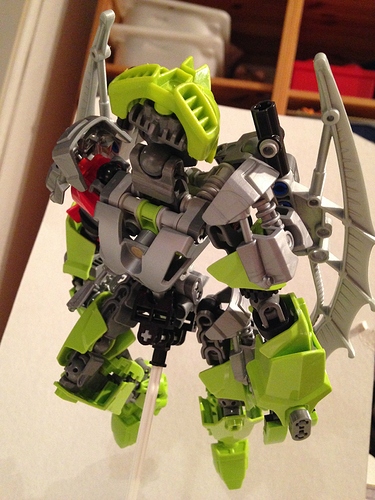 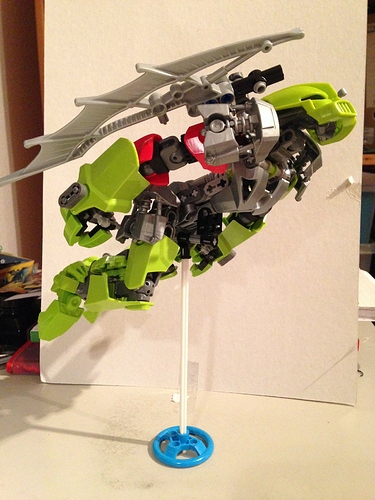 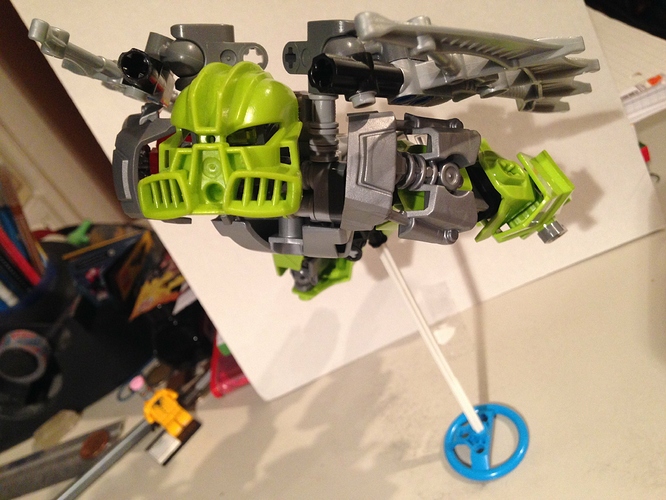 I really like this MOC. The torso’s so thin because I like it that way. Also, with the first version, many people appearantly thought the armor was part of her body; no, it’s just armor (I hope I articulated this in an understandable way).
Oh, and the red on her right upper arm is the ‘sign’ of the VMDF.
Alright, that’s it. Comments and criticism are definitely appreciated.
Have a good day.

pretty good! I think the red is pretty neat on this moc too!

I really like some of the layering you have going on in the arms.

My only complaint with this is that the torso is all silver, which really throws the color balance off.

The torso could use more lime to balance the colors, but this is otherwise solid.

Hey, thats pretty cool!
Feet? Nah
But the rest of the body is really cool, I love the swords on the back and just the overall shape of the moc

The arms are…really, really bulky on this one. Kinda messes with the proportions I think you were going for, especiallly with how massive the hands look.

The designs are pretty good on your own, but here I feel like the arms were built for a different MOC than the legs - they completely contradict the proportions you have set up.

It’s a pretty fantastic improvement to the original, however. Nice work.

First, thanks!
Second, the arms/hands are so bulky because I enjoy the glove or gauntlet look they have.
I’ll try a different, slimmer variant for the hands. Might be up soon.

Second, the arms/hands are so bulky because I enjoy the glove or gauntlet look they have.

Don’t get me wrong, I think the gauntlet aesthetic is really cool. It’s just that when it comes to this type of MOC, it’s usually accompanied by a heavy boot aesthetic, which isn’t really very present here.

Which is exactly why I liked the first version’s appearance more. I’ll try to do some heavy boots, but right now I just don’t have the parts/experience for that.