Hello, everyone! This will be the first MOC I will have posted here–My thoughts on what could have happened to Umarak after he was absorbed into the portal to the Shadow Realm and whatnot, incarnated into pieces.

I present to you–Umarak the Reaper!

I had a considerable amount of pieces left over after building the JtO Makuta from the required sets, so I decided to build something from them–the result was a new Umarak. 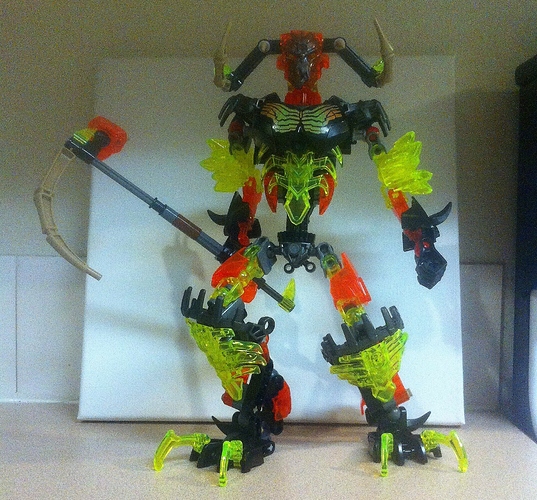 IMG_1772 (2).JPG1935×1799 1.32 MB
Having been betrayed by Makuta twice, bested by the Toa and Ekimu, and having his energy absorbed for the purposes of bringing Makuta into Okoto, Umarak now destroys any who oppose him, and vows to hunt for his greatest targets–the Mask Makers, Ekimu and Makuta. As the Toa closed the portal to the Shadow Realm and ascended to the stars, a broken Umarak was spit back out. He fled to reclaim his previous mask, the strange energies of his half-transformed body changing the mask’s color. He swapped out the bow for a bone scythe, deciding he wants a more physical approach when dealing with his victims now. An unlucky Okotan stumbled upon this broken being of rage incarnate, and barely escaped to tell his tale of a Reaper, roaming the island freely in the absence of the Toa. And so the name stuck.

I substituted in a number of pieces due to either availability or look–for starters, the chest piece being from a Hero Factory set (Crystal Beast vs Bulk). While the Umarak the Hunter chest plate worked as well, I felt this went better with the color scheme. The red ball joints were used because the black ones I had left over went towards Mask Maker Makuta. Otherwise, the mask was from the Ekimu the Mask Maker (but I’m sure many of you know that). I had initially used the green Mask of Shadows and subbed out the translucent yellow chest piece for the green one before I had gotten the trans orange mask, but it kinda looked wonky.
Anyway–here’s the skeleton. 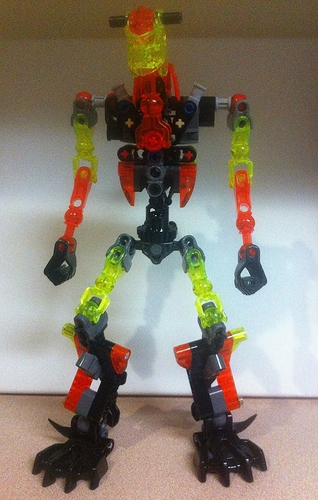 IMG_1782 (2).JPG1573×2466 1.29 MB
The legs are largely based off of Umarak the Destroyer, just without the larger feet. Arms are super basic, and the torso incorporates the 2015 gear box in a similar fashion to the Ekimu the Mask Maker set. The hard part was finding a way to throw in the Shadow Trap pieces for shoulder armor, as shown in the Destroyer and Hunter sets. I’d say it worked out okay, though I wish I had figured out a way to place them better. The set position for the neck on the 2016 torso looked a little goofy and didn’t work with the horns so I made the more forward one to fix that and follow the hunchback-esque look of the Destroyer. I keep the eye piece for the detachable Shadow Trap eye in the lower stomach pin hole and the middle connection piece attached to his right lower shoulder.
The head uses two different versions of the Technic arm pieces, the ones closest to the head being the ‘4’ version, and the outer ones being the ‘5’.

“Go! Find me my next target…the time for Reaping has begun.” 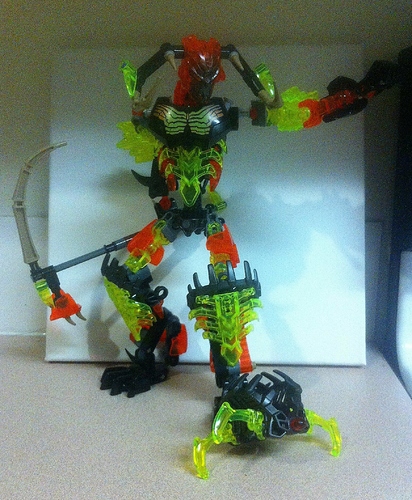 ) I appreciate constructive criticism and complements alike if any would like to share their opinions. Anyway, so long for now!
(p.s. Additional pictures available on MOCpages here: http://www.moc-pages.com/moc.php/436999)
30 Likes
SR388 February 20, 2017, 6:56am #2

peraps change the weapons blade design to make it look more imposing, other than that this really cool, and I’m slightly jealous that you have Umarak the destroyer parts…

@yolo360nosescope Thank you! I kinda just wanted to make it look like he broke his bow and threw it together, but if I get a better working blade piece, I will probably use that. As for Umarak the Destroyer, the only reason I got him was I happened to have some cash left on a gift card and I ordered him online in late November.

Honestly, the buying craze and lack of stock was terrible–I had to search high and low to find the sets to build Makuta, and even then, I was only able to do so because of the holiday season. RIP Bionicle…again…

The build is nice and the ideas executed here are neat. It doesn’t remind me of Umarak much, but it’s a cool character.

Not bad. I like how the skull ribcages and shadow trap pieces look together on the legs.

Would’ve totally liked this as a set in G2.

@Stoax Thank you! I think that was one of the parts I spent the longest time on trying to figure out XD

@Screeching_Out_Loud Thank you! I’m glad you appreciate it!

does the weapon have a funtion or is it just a cool looking bone scythe?

@Umarak Unfortunately, no function. However, I made it so it swivels in his hand so you don’t have to remove it to reposition it. Otherwise, it looked a little bland with just the bone piece, so I added the small armor shell on the back and used the small tan horn spikes for detail. Glad you like it though!