Welcome to the third entry in my series of Exo-Force reviews! Today we’ll be having a look at the two mid-range flying Battle Machines, the Stealth Hunter and Fire Vulture. 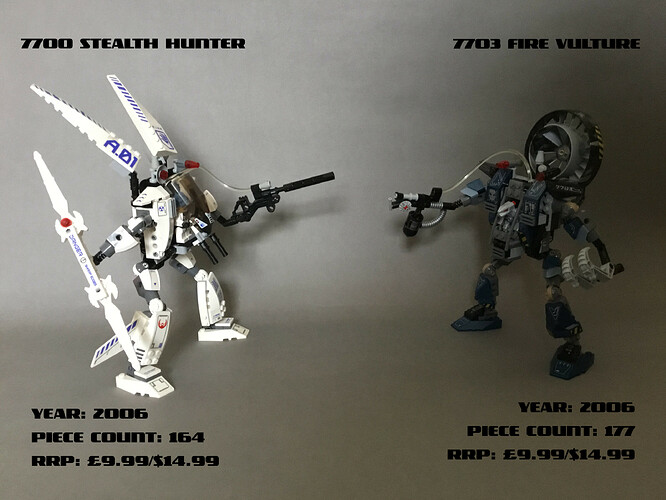 Let’s begin with, as usual, a look at the figures. 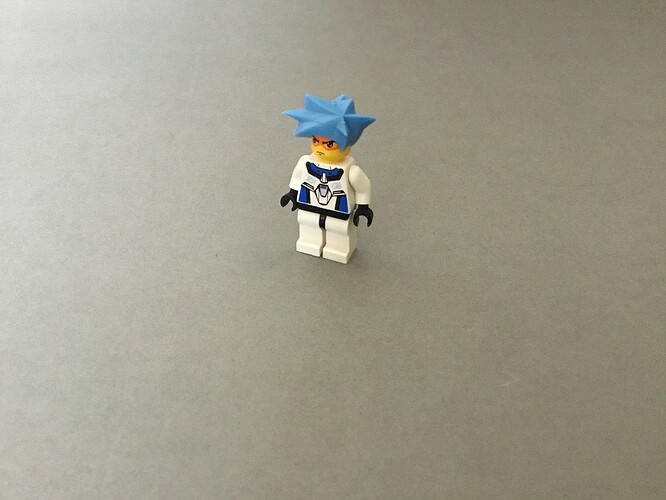 The Stealth Hunter contains our third member of Exo-Force, Hikaru. Hikaru actually differs rather greatly from his peers in the other sets, simply by having a distinctively spikier hairpiece. While this mold is shared with two other characters over the course of theme, Hikaru is the only one of the main four heroes to sport the style, here provided in a vibrant blue. 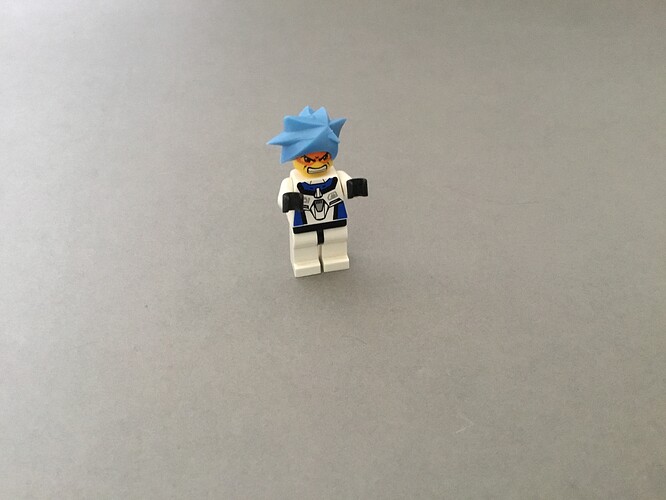 He’s further set apart from his fellows by a printed-on orange visor to shield his eyes from any winds he may experience whilst in the air. If we flip his stern face around, we’ll find an expression which looks even more enraged than Takeshi’s!

Hikaru’s uniform, like Exo-Force’s other members, is dominated by a single colour, in this case white. His torso features some very intricate printed angular armour with some striking blue highlights, matching his vehicle.

On the robot’s side we receive another Devastator, this time having light blue accents rather than the previous red. This marks it as an Aerial Combat Unit, suitable for the mech it comes with. Surprisingly, this version of the Devastator is one of only two robots in the entire line to remain exclusive to a certain set, the other being the Venom Walker from Sentai Fortress.

Now, onto the Battle Machines, starting with the Stealth Hunter. 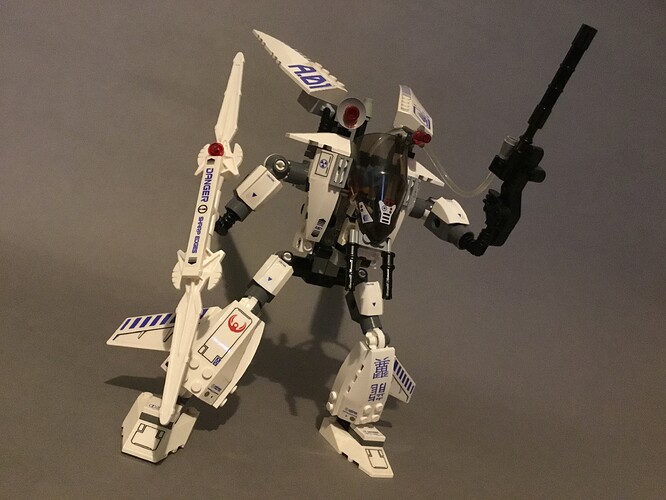 I’ll just start by saying that, out of all the first year mid-range mechs, I find this one the most fun to pose. It’s got perfect balance, and tons of different moving parts to work with. 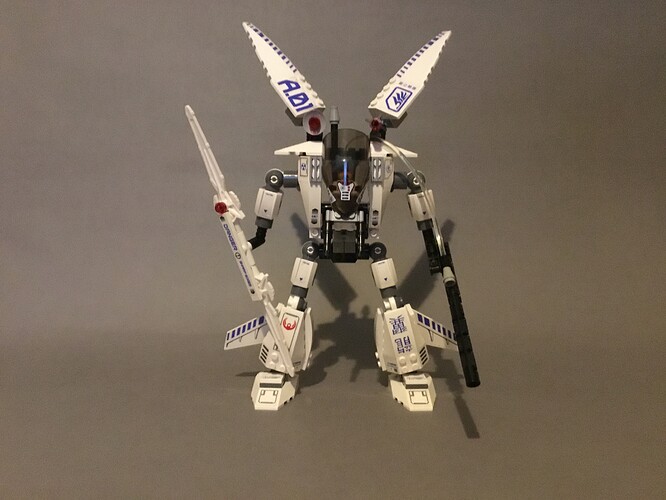 Style-wise, the Stealth Hunter has a very impressive and recognisable silhouette, thanks to the huge wings and matching ankle fins giving it an almost star like shape. It looks sleek and aerodynamic, perfectly fit for flight. This is helped by the cockpit, which is shaped less like a traditional windscreen and more like the front of an attack helicopter, complete with two nose-mounted machine guns aiming down for picking off basic infantry. The Stealth Hunter is also unique in that it is the only mid-sized mech of 2006 to actually have controls, represented by a single black joystick. 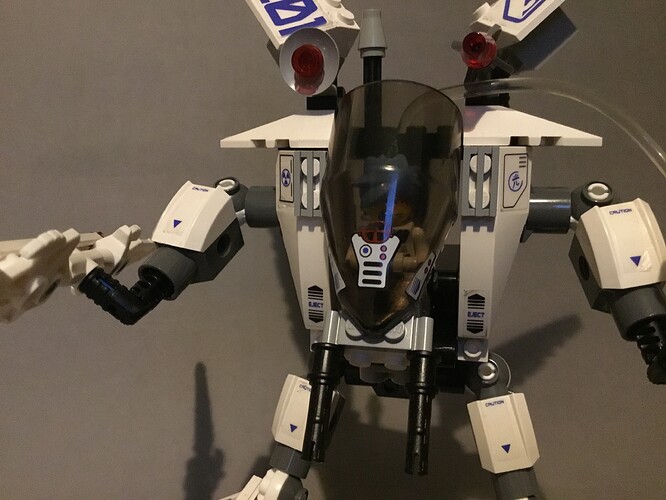 Continuing from there, we can see markings for an ejection system on either side, alongside some panelling detail, featuring a radiation symbol on one side and a Japanese logogram meaning ‘light”. Mounted atop the shoulders are a small radar dish and missile respectively. Combined with the machine guns, that’s actually all the body-mounted weaponry in the entire set, a minuscule amount compared to the previous sets we looked at. This makes sense, as a skyfaring vehicle would need to be as lightweight as possible; loading it with weaponry would be extremely counterproductive. We can also once again spot the ‘chimney’ used to eject the light brick. 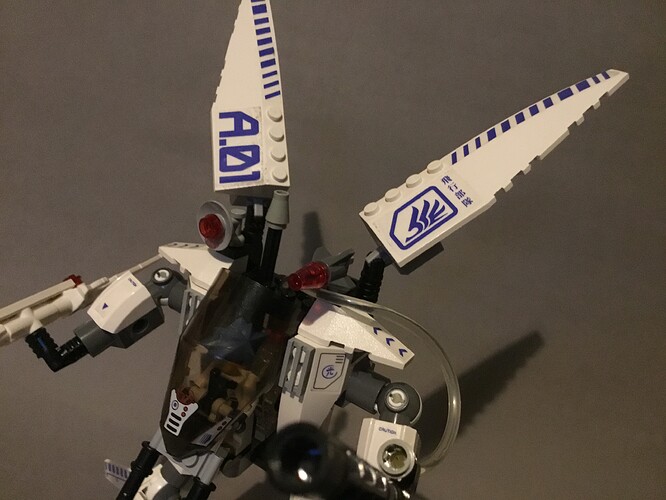 Usually there’s nothing above the shoulder-mounted accessories, but in this case a huge pair of blade-like wings decorate the mech, featuring some nice striping and the vehicle’s designation, in this case A.01. As you may have guessed, this stands for ‘air’, complemented by the wing-like Air Force logo on the opposite side along with some Japanese text reading ‘Flying Unit’.

Moving onto the arms, we’re first greeted by a lengthy double-ended blade weapon, constructed from two of Danju’s sword recoloured in white, secured by a tile with a warning label. 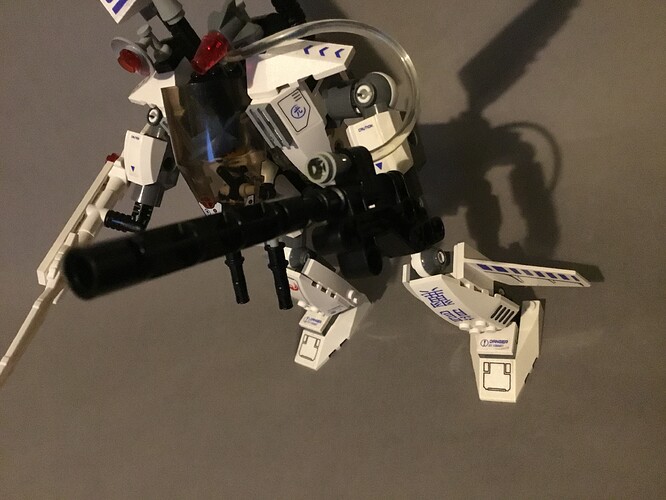 The opposite arm features an equally long rifle, again using a spiral staircase column as a barrel. However, this firearm also uses a Bohrok skull as a main body, an ingenious parts usage. A scope adorns the top, with a now familiar fibre-optic cable leading out of it and into the back. 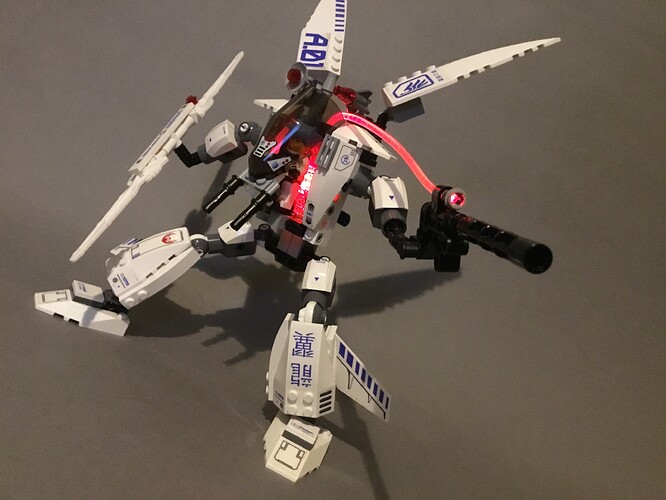 As usual, pulling a back-mounted lever will light up the entire cable, along with the scope and the brick itself. 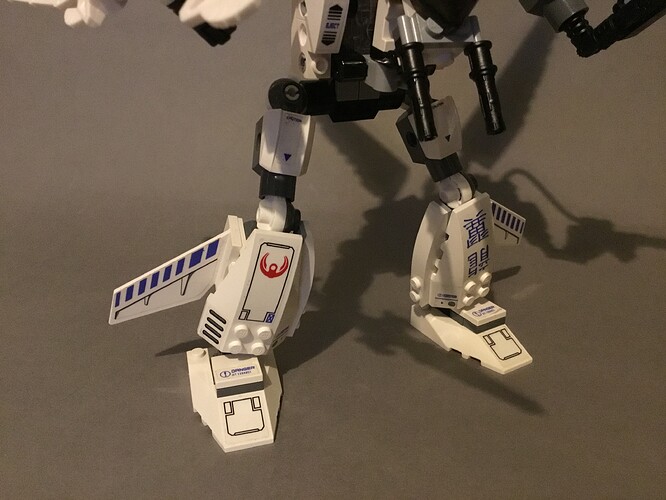 The legs share many similarities with the Grand Titan, although there are some noticeable differences p, most obviously the feet, which are now a lot longer and slimmer, which improves the mech!s stability. The shins feature almost identical decoration to the Grand Titan, differing only in the inclusion of Hikaru’s symbol on the right leg and some Japanese text translating to ‘Dragon Wing’. Two smaller fins are also secured here to match the upper two. 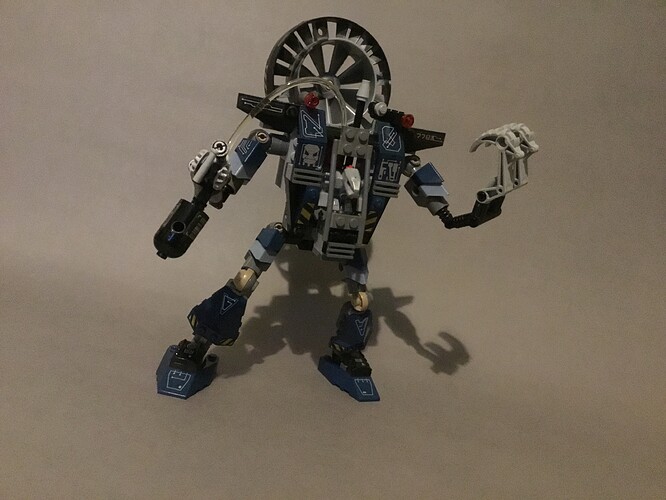 The Fire Vulture shares a similarly recognisable silhouette, dominated by the huge turbine above the cockpit and its strange upwards-sloping shoulder pads. It, like the Thunder Fury, is a lot more boxy and angular than its human counterpart, especially in the torso. This helps solidify the robot’s spikier aesthetic, which is shared across almost all of their vehicles throughout the entire theme. 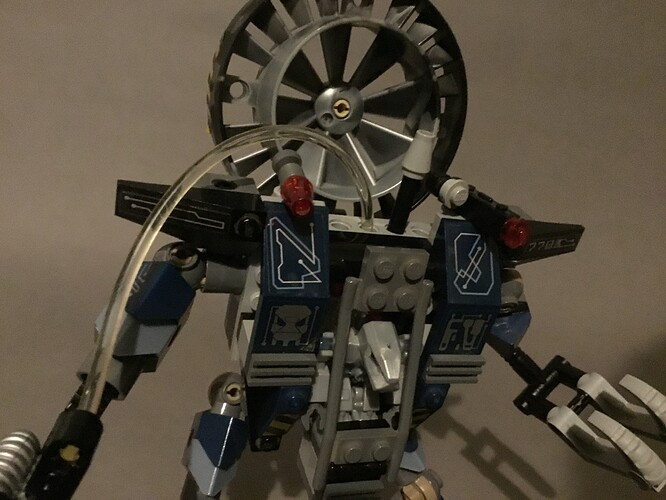 As usual, the torso of the mech houses the cockpit, in this case including a grey roll cage for some added protection. The area is surprisingly hollow and stripped down, perhaps the robot’s attempt at making their vehicle’s lightweight enough to be airborne.

The Fire Vulture carries the least amount of body-mounted weapons of all the mid-range Battle Machines, carrying only two guns upon the shoulders. But, above these tiny firearms is the mechs signature massive turbine, decorated with no more than eight stickers around its perimeter. 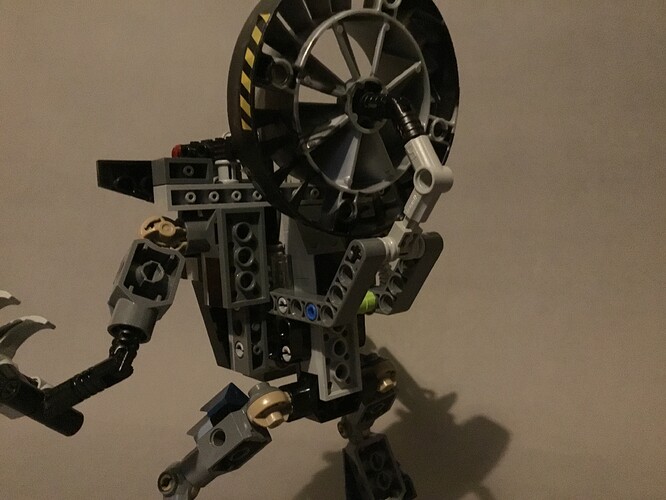 The turbine is actually mounted to the lever used to activate the light brick, meaning you can pull down on the turbine itself to activate it if you want to. The turbine itself can spin freely, and is attached to a click hinge which allows it to be angled like a VTOL. You can even have it completely horizontal like a helicopter…

…But that looks a bit silly, doesn’t it? 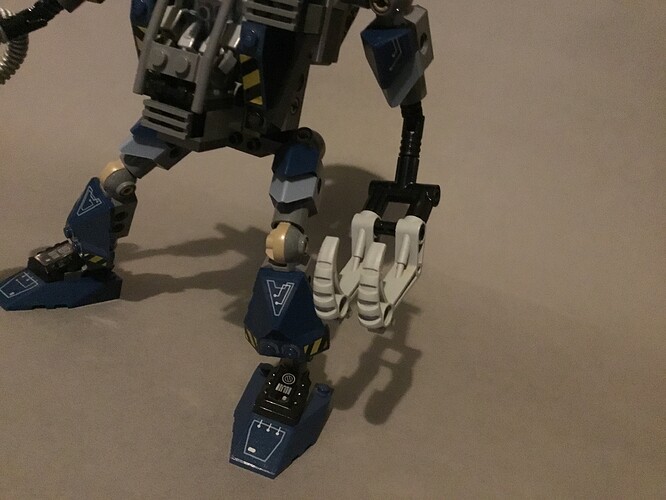 Just like the Thunder Fury, the Fire Vulture’s weapons array is mirrored compared to the Stealth Hunter, with the left arm carrying the close combat tool, in this case a giant double-jointed claw made from some light grey Gali hooks, which are not recolours (thank you @thewimpykid). While these didn’t appear in Turaga Dume and Nivawk like he had thought, his claim did prompt me to check the colour on Bricklink which revealed that a single grey hook actually did appear on a Technic truck in 2004. So, uh… whoops. 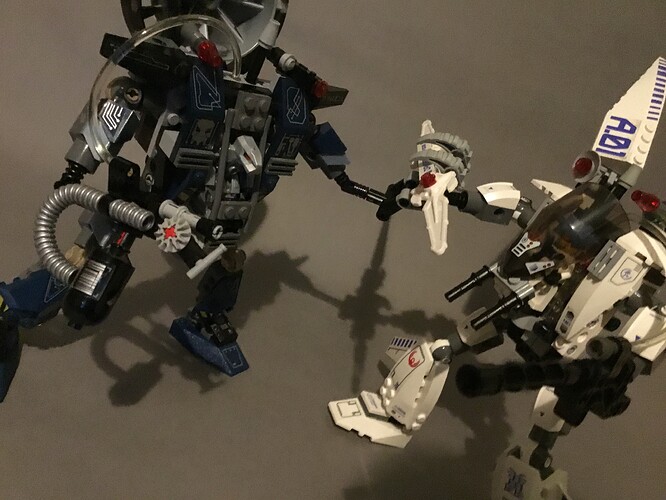 Whatever the case, due to their mirrored nature a greater level of interaction is present between the two aerial mechs, with this claw being perfectly sized to latch onto the Stealth Hunter’s blade. 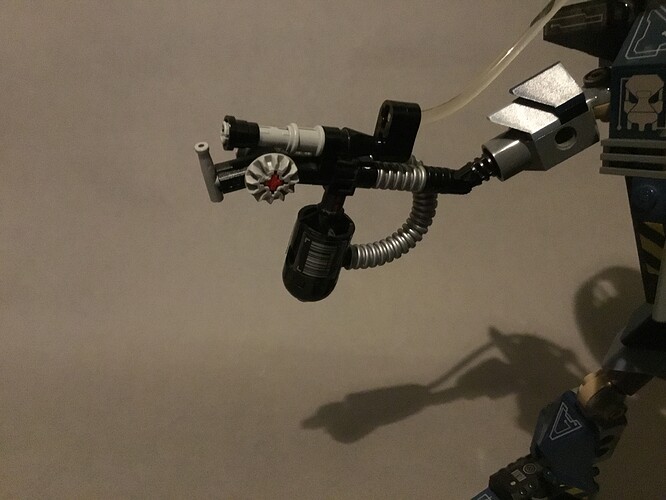 The other arm carries a very well-detailed flamethrower, with another fibre-optic cable plugging into what seems to be a, uhh… scope? Not sure why you’d need a scope on a flamethrower, but it lights up regardless. 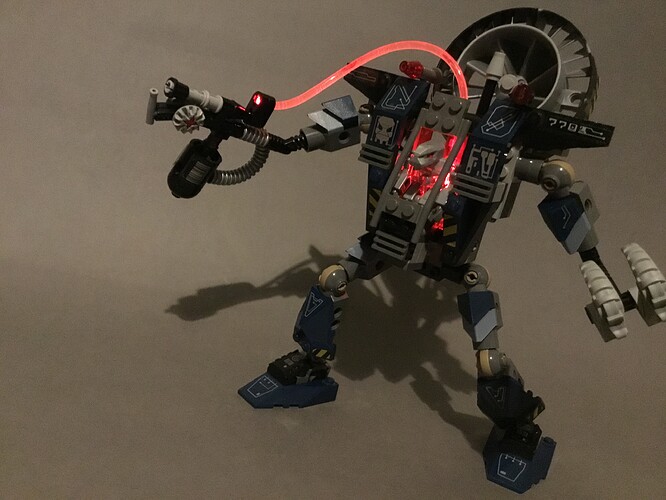 Like with the Thunder Fury, the Devastator’s transparent torso also lights up due to being directly in front of the light brick. 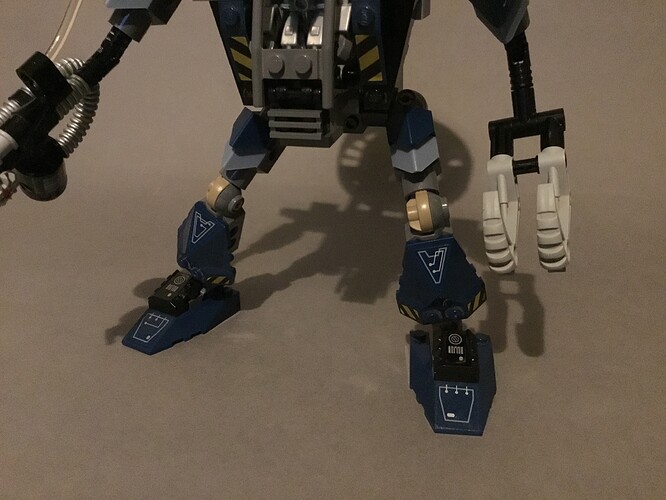 Finally having a look at the legs, we can see that almost everything is built completely identically to the Thunder Fury, even down to the ankle. The foot, however, is built more like the Stealth Hunter’s, instead using this single slimmer piece rather than a more involved build.

Value-wise, these two sets retailed for the exact same price as the other mid-range mechs, so present astounding value, especially considering their size and use of electronics.

However, design-wise the Fire Vulture is very clunky, and is probably my least favourite of the 2006 mid-range sets. That doesn’t mean it’s bad, far from it, it’s just not as good as the others. The blocky torso, boring weapons and drab colours don’t help it much, and this is the first set where it really seems like they had no idea what to do with the light brick. Why couldn’t they have just built it into the barrel of the flamethrower to make it look like it was about to spew some fire out of it, rather than just slapping it on top like an afterthought?

On the other hand, the Stealth Hunter is definitely my favourite of the four mid-range mechs, with a striking appearance, excellent stability and poseability, cool weapons and a distinctive minifigure.

In terms of ratings, the Stealth Hunter gets an easy 9/10, let down only by the slightly fragile connection the cockpit attaches by. Unfortunately, the Fire Vulture shares Uplink’s low score of 6/10. It’s a good set, but certainly not one I’d ever recommend getting if you’re interested in this theme. If you want the exclusive Devastator I’d get it, but it’s definitely not an essential purchase.

Conversely, if you don’t have any Exo-Force sets, the Stealth Hunter is a perfect, inexpensive introduction to the theme. I forgot to mention aftermarket value last time, but luckily all four of the mid-range mechs can be all found for £15-20 still. Yes, it’s almost double the RRP, but they were such good value to begin with that it’s still a reasonable price to pay. 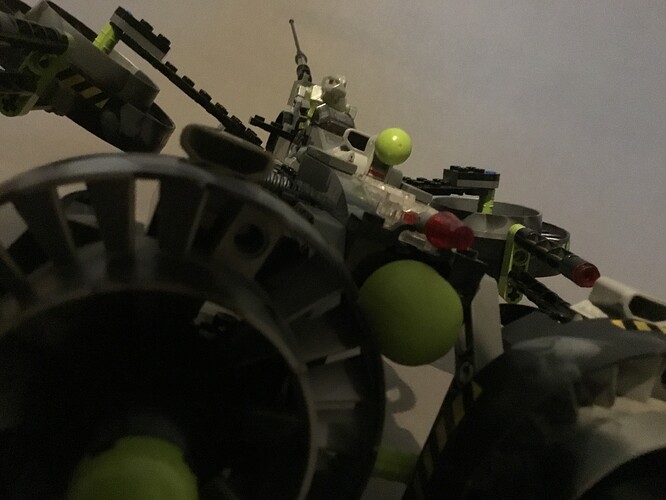 These reviews are, again, fantastic! I never paid too much attention to these two, but you’re right, the Stealth Hunter really is something special. I do like the Fire Vulture’s colors, but it just seems less interesting and more poorly constructed than the others.

Do you think you will review the combo models and alt builds?

I’d definitely like to review at least the combo models at a later date, as, as far as I can tell, no reviews have ever been made of them online.