The next Exo-Force review has arrived! Today we’ll be looking at our first larger set, the Sonic Phantom. 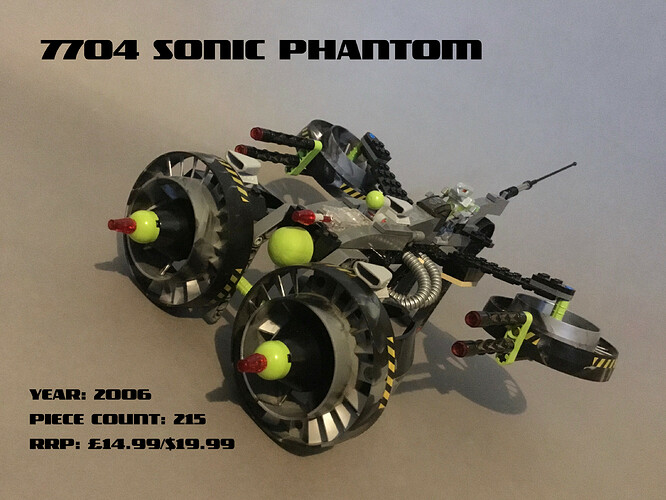 As usual, a quick look at the included figure before we examine the build itself. 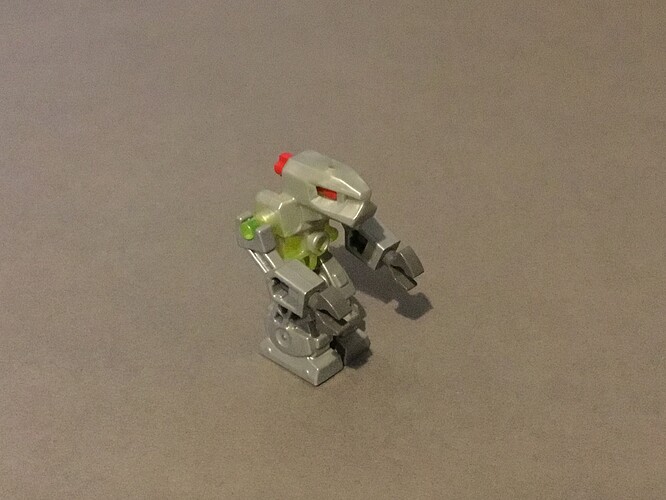 The single figure this set contains is yet another Devastator, again sporting special colouring. This Devastator’s torso is marked with a vibrant green, denoting it as a Special Forces Unit. These Devastators usually only pilot larger or more powerful vehicles than others, such as the Sonic Phantom itself, which we’ll take a look at now. 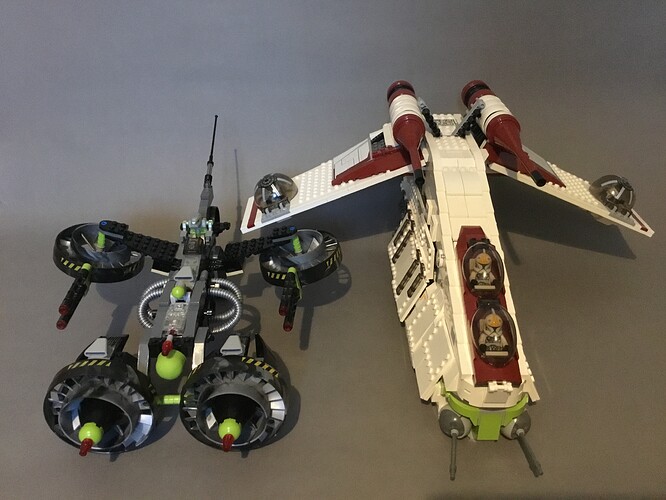 First things first, I must stress just how huge this vehicle is for its piece count. With just barely over 200 pieces, it’s enormous size easily rivals builds with almost six times the amount of parts like the Republic Gunship. It’s a truly impressive model by size standards, but how well does it fare in other factors? 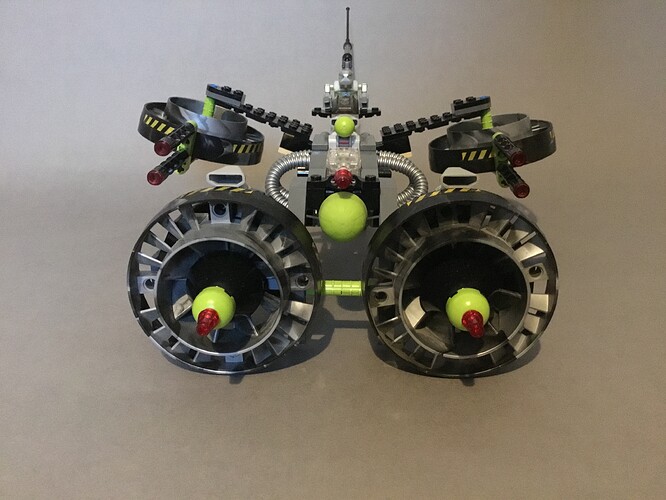 Starting at the front, we’re immediately greeted by a pair of giant turbines matching the one found on the Fire Vulture. They convey a sense of speed simply by their enormity, implying insane amounts of thrust and power. They can also spin freely on their axles, simulating flight. A large rubber-tipped missile sits between these engines, part of a function we’ll get to later. 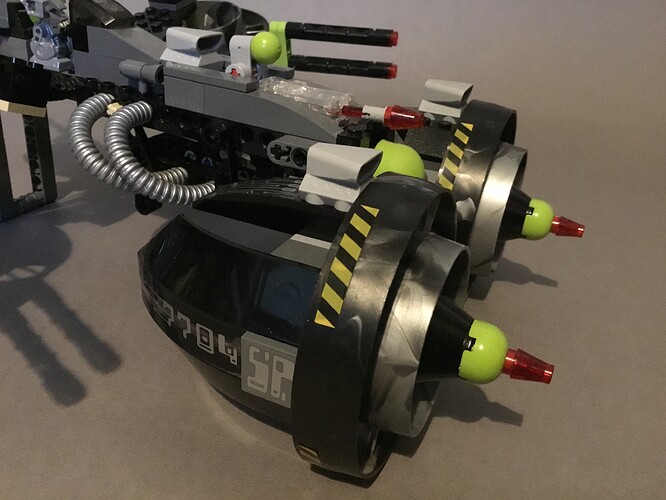 Large tapered cowling fills out the engines from the sides, further adding to their mass, while a single V8 engine block provides a small intake at the top. 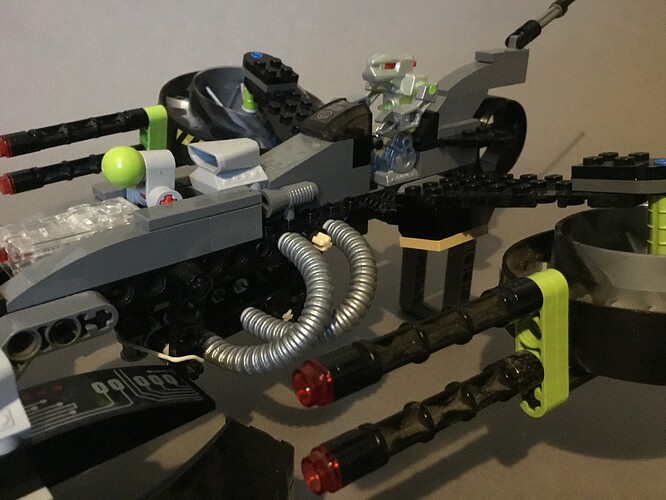 Continuing our way down, we find the midsection of this beastly vehicle bulked up with some ribbed hoses, as well as some further engine detail in the form of another intake and some grey loudspeakers. We can also see a fairly conspicuous technic contraption sticking up in front of said intake, directly next to a light brick hooked up to a small laser cannon. Again, we’ll cover this gimmick later. 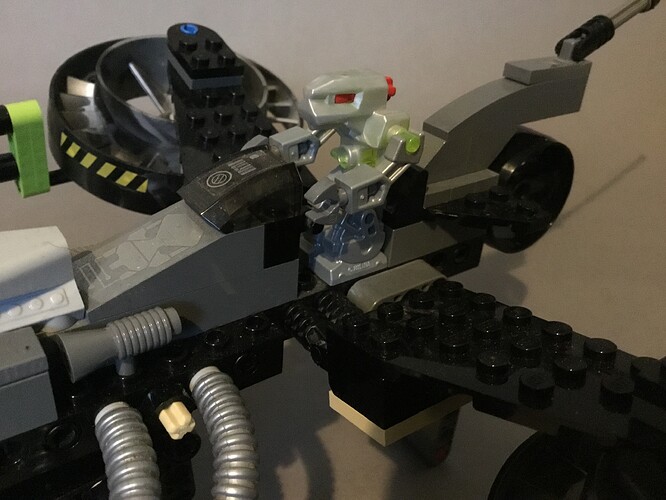 The robot pilot occupies a very rudimentary seat, featuring only a tiny set of handlebars which are too narrow for him to even be able to hold. An equally minuscule windscreen attaches ahead of him, not really providing any protection whatsoever. 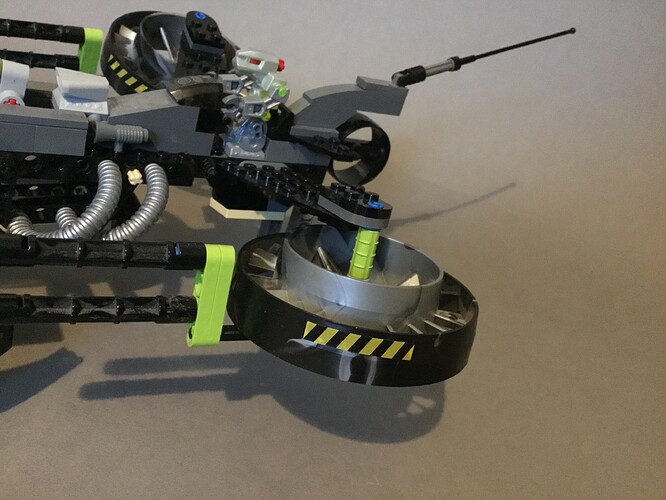 Angled wings extend from either side of the cockpit, ending in another pair of gigantic turbines, this time facing downwards for vertical takeoff and carrying a set of Exo-Force’s signature staircase-column guns. Despite their fragile appearance, these turbines can still spin with ease, although this can knock the guns out of alignment if the blue pin is particularly loose. 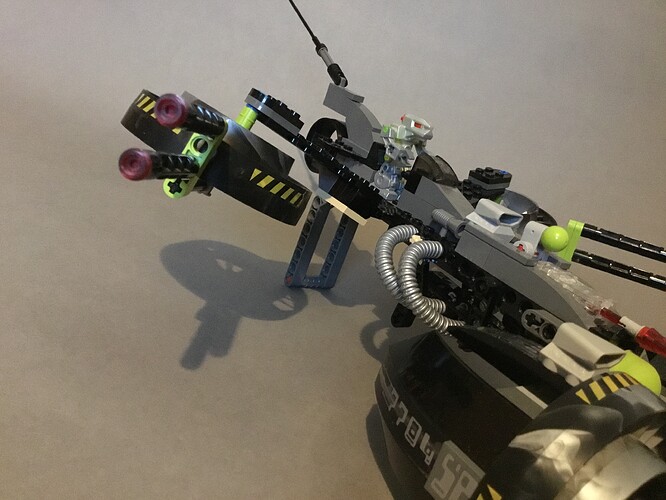 Although, thanks to that blue pin, both weapon emplacements can swivel a full 360 degrees around the wing, allowing for a greater range for the vehicle to achieve. The wings themselves can also be adjusted up or down thanks to a pair of ratcheted hinges holding them up. 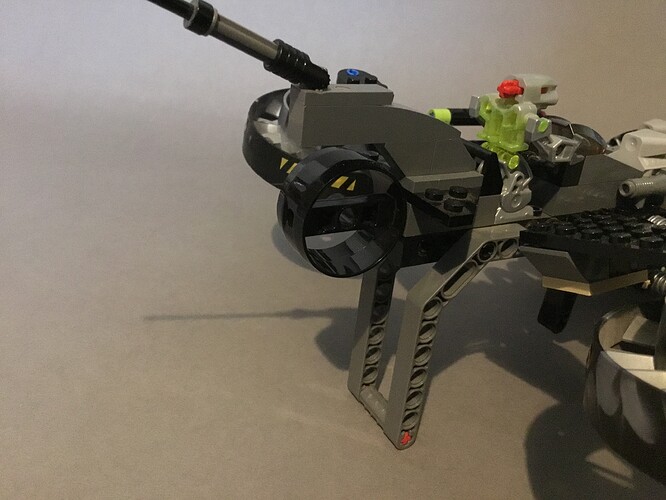 The vehicle’s tail fin sits directly behind the pilot, featuring a long, trailing antenna sticking off the back to further convey the swiftness of the machine. A smaller turbine is also situated here, able to be rotated 360 degrees for steering manoeuvres. You may also have spotted the fairly obvious technic handle protruding from the bottom, both acting as landing gear and allowing you to safely pick up the aircraft without fear of breaking it. However, this also leads us into the function. 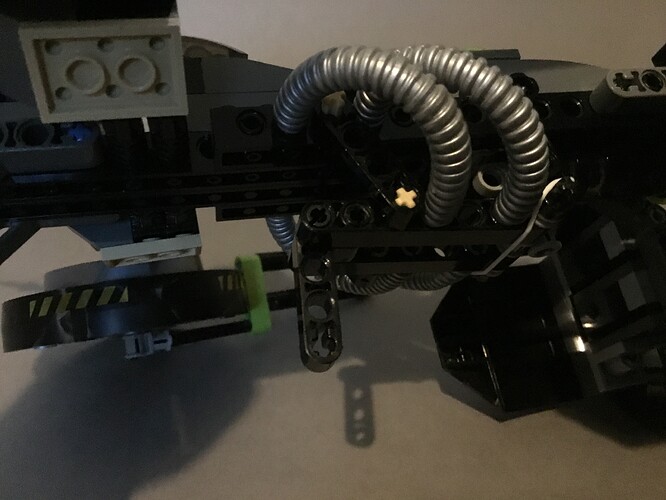 Underneath the model is a clump of assorted technic beams tightly woven together with a rubber band strapped across them. One beam sticks out a slight bit more, a beam near enough to the handle that it can act as a trigger.

Once you pull this trigger, the giant missile fires from the front of the vehicle and the light brick ignites and completely illuminates the laser cannon, producing a great effect. Unfortunately, however, because of the way the mechanism works, the light brick isn’t connected to anything. At all. It’s just laying in this crevice at the front, meaning that if you try to perform some more complex manoeuvres with the vehicle it’s more than likely that the brick will just fall out entirely, taking the laser with it. This isn’t something that can be easily rectified, as the brick is required to slide forward for the gimmick to work, thereby preventing you from simply attaching it to the rest of the model.

Finally, the price. This set retailed for just a mere £14.99 at the time of retail, an insane price for the sheer magnitude of the finished model. This, again, is the advantage of 2000s-era building; this set has a very low part count, yet by using a lot of very big, substantial pieces, the end product feels like exceptional value. It’s not as condensed as modern building, which tends to be more compact and detailed, while it seems the 2000s design philosophy was just to make everything as big as physically possible within the parts budget. We’ll certainly see this carry on as I move through these reviews.

If you want to purchase this set nowadays, you’ll find that it’s not really worth much more than the original retail price, making it still an exceptional value today.

So, ratings-wise the Sonic Phantom scores a solid 8/10. It’s great value, but it’s not perfect. The loose light brick is especially frustrating, but at such a low price it’s really impressive how substantial the set is.

If you already have an Exo-Force collection, I could certainly recommend adding it to your robot ranks, but it’s not a set I’d suggest as an introduction to the theme.

That’s it for the Sonic Phantom, but I think how’s the time to bring up the fact that I don’t have every Exo-Force set. Chronologically, the next three sets are 7705 Gate Assault, 7706 Mobile Defence Tank and 7712 Supernova, however I don’t own any of them. In the original poll, @Axelford suggested that he could review the missing parts of my collection, so, if you have any of these three and don’t mind doing so it’d be a great help in order to provide better coverage of these remarkable sets.

Next time we’re going really big… So big, in fact, that it can’t fit in my lightbox! 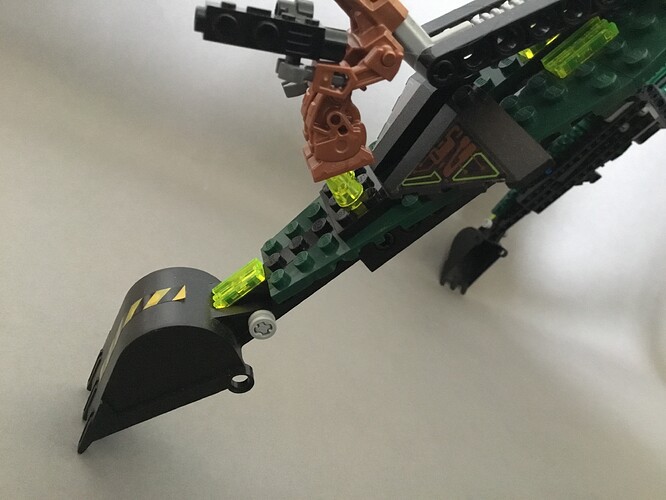 Yeees… another review. Like the others, it is very detailed.
Very nice job here!

I know this one

Alas this was the only set I didn’t have, because it was very incomplete we now just have those 4 giant propellers in our LEGO trays still trying to find a use for them . Oh boy that next one. Wow that was so hard to store anywhere

Beautiful add-ons to the gunship.

Why does your devastator have blue on his legs?

I’m pretty sure that that’s just a shadow

Anyway, lovely review, as always. This was on of my favorite themes of all time, so it’s nice to see it get some love

That’s just a shadow cast by his arm.

This is the only first-wave Exo-Force set I actually own. It was disassembled long ago–so long, in fact, that I forgot what it looked like–and now it’s funny to see where various pieces in my collection actually come from. It honestly doesn’t look all that great to me now, despite the tremendous size, so maybe I’m not too disappointed that said pieces are now scattered to the point of potential inability to be gathered again.

My cousin got this set for Christmas when he was a kid, doesn’t own it anymore as his dad sold it along with the rest of his collection years ago. This was a great set for 2006, it always reminded me of a militarized podracer.