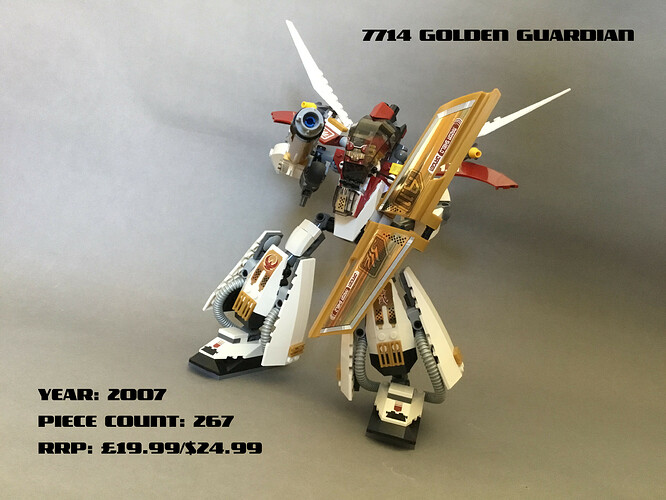 As with before, a quick look at the single included figure, Ha-Ya-To. 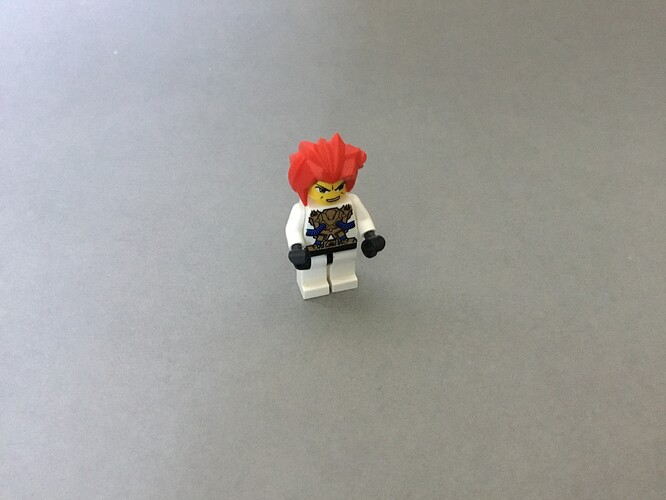 Ha-Ya-To, like his teammates, retains his 2006 head, though this time he also retains his 2006 legs, making his torso the only new part on him, here depicting golden torso armour with a couple of blue hoses. 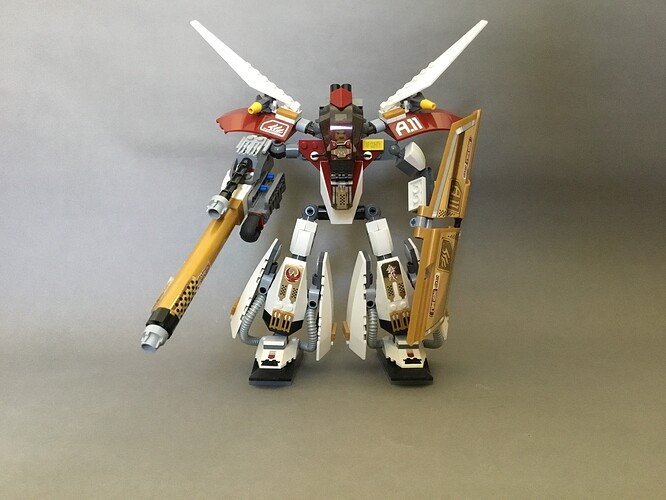 The Golden Guardian itself has a very unique design compared to every other humanoid Battle Machine we’ve looked at so far, with incredibly bulky armour and similarly enormous weaponry. This set unfortunately also suffers from the notorious sticker degradation issue, with my copy suffering from cracking, though not nearly to the extent of the Blade Titan. 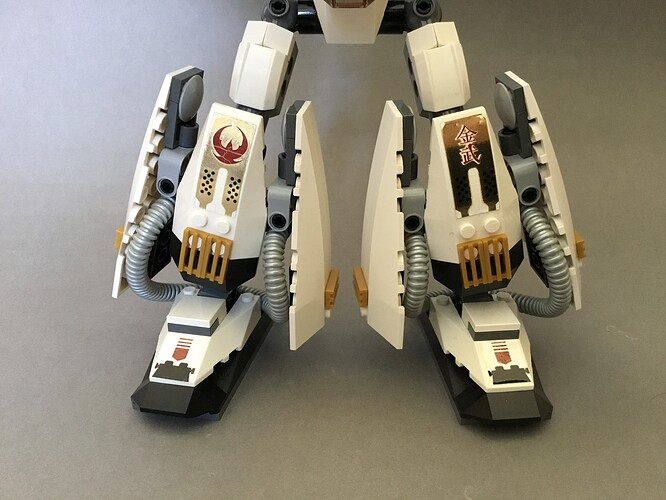 The legs are insanely wide, to the point that you can’t even pose the mech with the legs straight down due to armour collisions. Flexible hoses fill out gaps in the design, and chromed stickers provide great decoration. Additionally, these gold grilles were actually new and rare at the time of release, although they are much more common today. 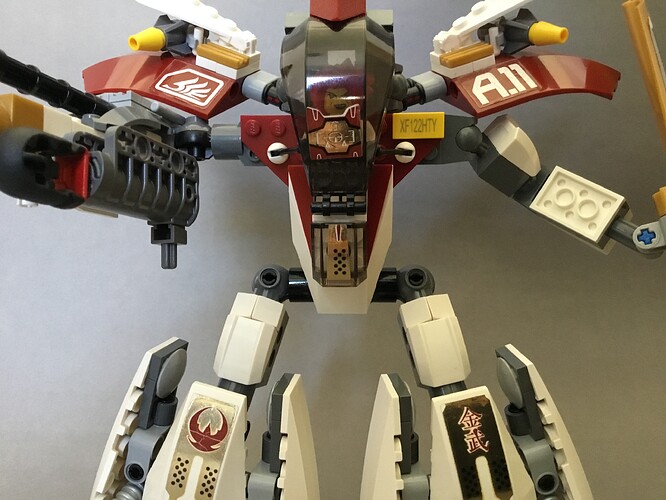 The vehicle’s torso is not much larger than the mid-range sets, although the cockpit is much bigger and contains actual controls for the pilot. An Exo-Code is attached on the left side, again containing a unique code. 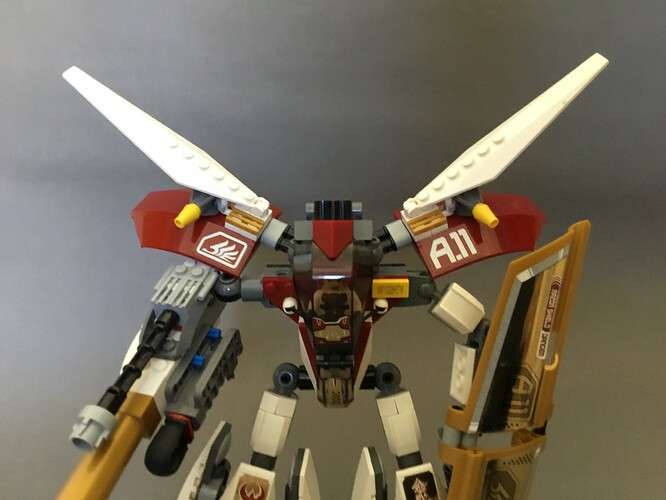 The body is completed by titanic shoulder pads, equipped with a yellow-tipped missile each and displaying the appropriate ‘A.11’ and Air Force insignia. 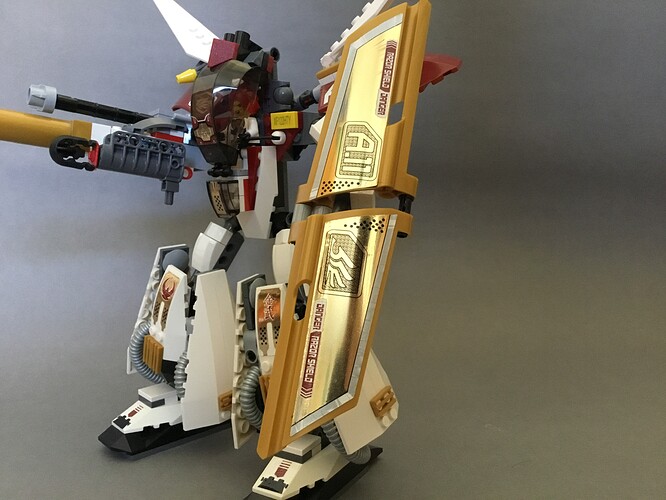 The left arm features a gloriously chromed shield, made from a pair of exclusive golden technic panels. This shield can be posed very well due to the multitude of ball joints and hinges used to attach it to the model. 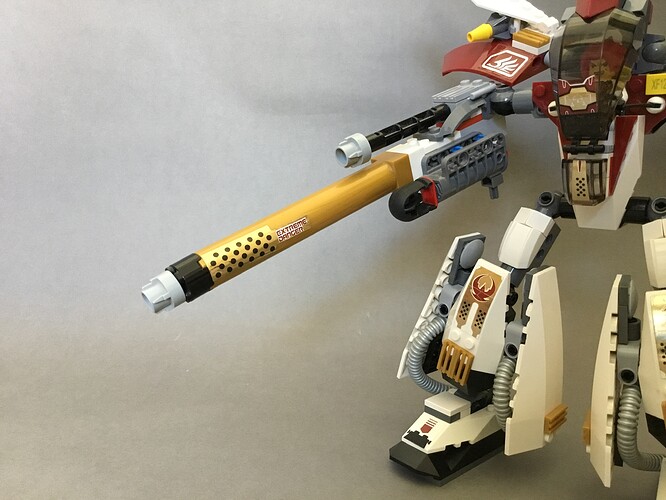 The other arm is practically nonexistent, replaced entirely by a ridiculously long cannon made from an exclusive gold pillar. A smaller staircase gun adorns the top, while a competition cannon provides a powerful launching projectile to fire.

Usually this section would be dedicated to value, but, like the Bridge Walker, this set was a Special Edition, and as such has a more interesting story than other sets. 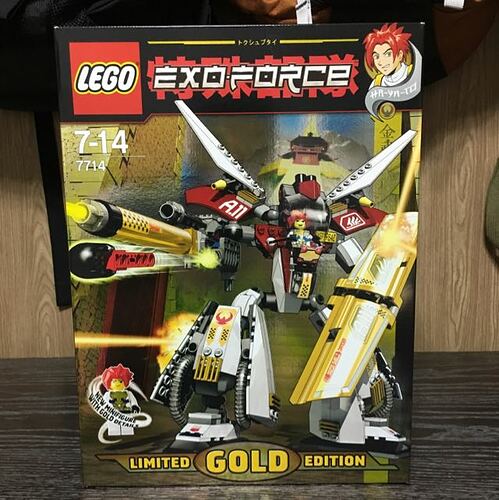 The set’s box advertises it as “Limited Gold Edition”, with the gold areas of the set being actually metallic on the box as well.
This set was only available for about 8 months, a much shorter lifespan than most other sets. It was also much harder to find, though not to the extent of the Bridge Walker.

While the set’s £19.99 RRP represents decent value, with one big mech for the price of two mid-range ones, it’s current value of approximately £60 is a lot harder to swallow, especially since it’s not that much bigger than a normal mech, just much bulkier.

Overall, at its current value I can only give it a 7/10. I’d really like to give it more, but despite its increased volume, this set just isn’t worth the tripled price it sells for now. If you really, really want it, I suppose it could be justified, but I’d wait to see if you can get it cheaper some way.

Next time will be the final Exo-Force review, finishing with all three of my complete 2008 sets! 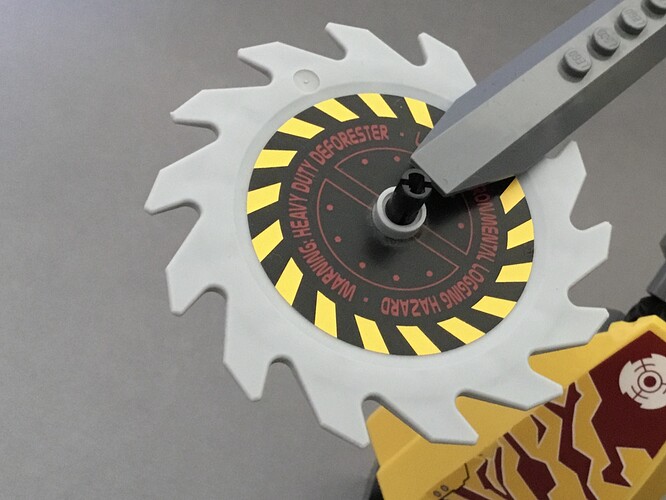 Those technic panels…mmm…Delicious.
That gun design is pretty cool. i like it. There is one thing that bugs me, though. the minifig’s face being yellow while the illustration shows it in a more human colour than yellow. Why is that?

Oh me like gold pieces
Uh
The review is pretty nice too.

I like the extravagant and somewhat over-the-top look of this one.

How expensive are those gold technic panels and that pillar? Those are the most desirable parts from the set to me, the rest looks like could easily be parted out on Bricklink for much cheaper than 60$…

How expensive are those gold technic panels and that pillar?

I was barely aware of this set at the time of release, despite being at my (low, but still) peak of Exo-Force set-getting. This is the first time I’ve ever seen it in detail, and I have to say, it looks really good. I kind of wish there was more of a right arm to hold that cannon, but the weapons are awesome and I quite enjoy the color scheme. Weird how it has an Air Force symbol, though, considering it’s mainly a ground mech that only flies for short distances with an upgrade.

I do find it funny that Ha-Ya-To pilots this given how often he gets shafted with screentime and battle machines in the story. In a way this is even a continuation of that (potentially unintentional) gag, since the Golden Guardian isn’t one-of-a-kind like the Blade Titan, Sky Guardian, or Cyclone Defender. It’s too bad it’s so expensive on the secondary market, or else some rabid Exo-Force fan (not me, of course) could assemble an approximation of the canonical Golden Guardian Tower Defense Legion. It might be worth parting out, though–I’ve never done it for a set, but I’d be interested to try with this one.

Thanks for the review as usual, Monopoly! You do a great job.

There is one thing that bugs me, though. the minifig’s face being yellow while the illustration shows it in a more human colour than yellow. Why is that?

In the comics, all members of Exo-Force are depicted with actual flesh tones rather than yellow. This might be because the comics show the characters as (anime-ish style) humans, akin to the illustration on the box, and skinning them yellow may have come across weirdly.

on the box, and skinning them yellow may have come across weirdly.

Exactly. There are lots of discrepancies between the minifigures and the comics, actually, which is kinda weird considering those were the dominant storytelling devices. The robots got three fingers per hand, for instance, instead of little claws.

EDIT: Y’know, currently rereading the Exo-Force comics and reading Monopoly’s reviews gets me wondering–would anyone be interested in an Exo-Force lore dump? Do most people know the story, or what?

There is one thing that bugs me, though. the minifig’s face being yellow while the illustration shows it in a more human colour than yellow. Why is that?

Funny enough, when I saw the Exo-Force sets as a kid, I was tricked into thinking it was a licensed theme because of the Anime style…

These exo force sets really were pretty cool.
Thanks for the review.