It’s time to finish these off. I’m back now with the next 2007 review; the mid-range ground mechs Blade Titan and Shadow Crawler. These next few reviews will be released in very quick succession so I can get back to work on the self-mocs. 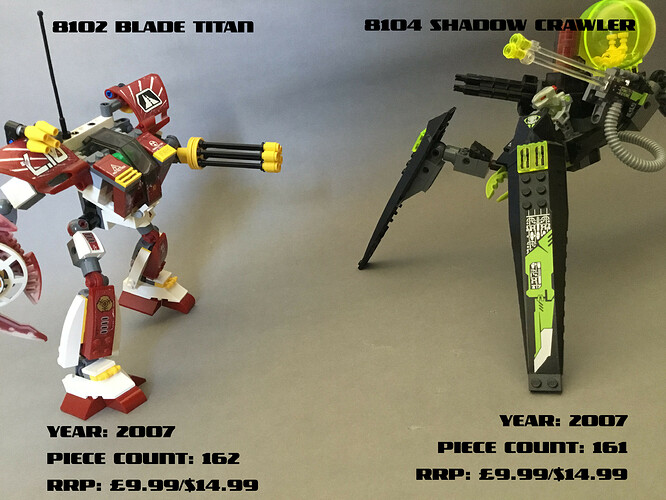 We’ll start with the figures, as always. 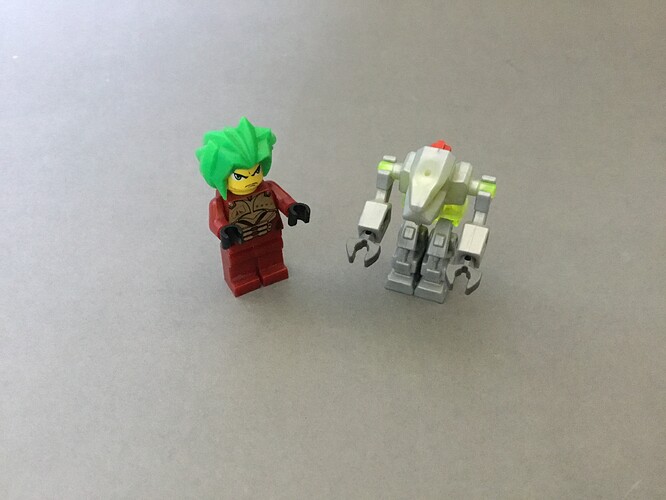 Takeshi, like Hikaru, has only been altered in his legs and torso since last year, now wearing a dark red suit with gold plating printed on. The Devastator, meanwhile, is the Special Forces variant previously seen in the Sonic Phantom. Like the returning Heavy Weapons Devastator in the Iron Condor, this is the last time this figure ever appears in the theme. 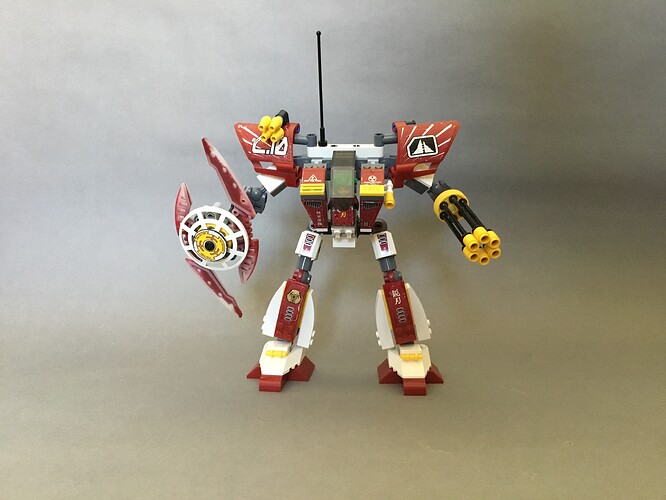 The Blade Titan shares an almost identical structure to the Sky Guardian, with the only difference being the use of regular ball joints for the biceps rather than Toa hips. The armouring, meanwhile, is entirely different, being much bulkier, blockier and wider. 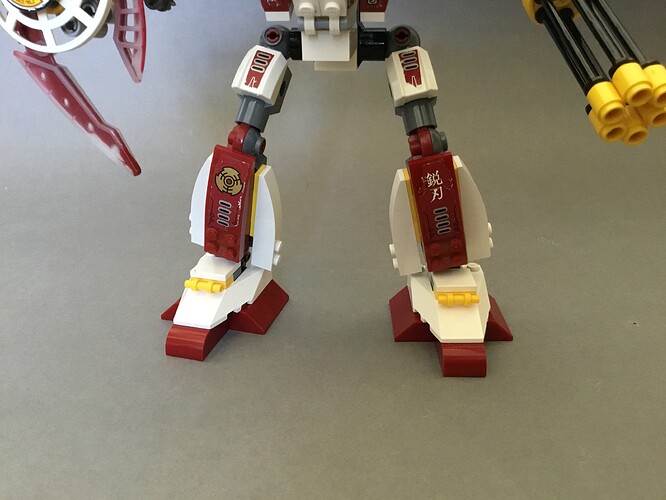 The legs of the machine have similar enlarged feet to the Sky Guardian, but its shins are similarly bulky, so it doesn’t look as odd. The usual Japanese text on the shin translates to “Edgy Blade”. I’ll just state right now that this set suffers from the infamous sticker degradation of the late 2000s. This unfortunately affects almost every set from 2007-2009 with either white, metallic or dark red stickers, causing them to split, disintegrate, go white at the edges, have a murky film start appearing and peeling away from them, or worse yet, all four. My copy of this set suffers from both splitting, white edges and disintegration, as you can see from the shins and thighs. 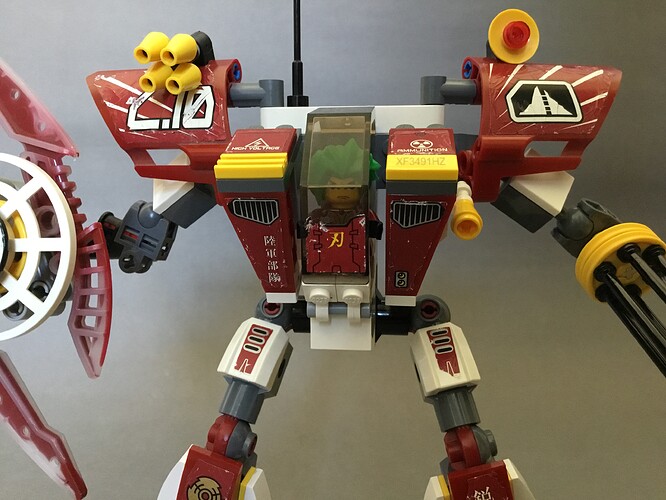 The mech’s torso is very boxy and plagued with similarly poor stickers. The chest displays another Exo-Code, while the shoulders are decorated with the familiar Ground Force symbol and an ‘L.10’, after the numbering reset mentioned in the previous review. An aerial, radar dish and missile rack line the top of the vehicle, providing communications and weaponry to the pilot. 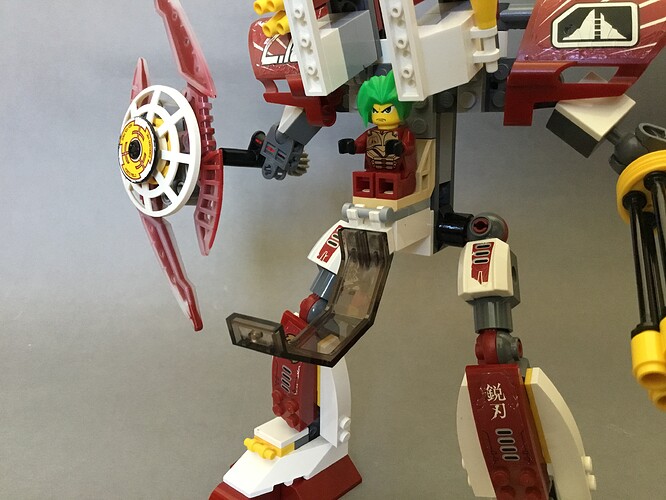 The cockpit opens in two directions for remarkably easy access to the pilot. 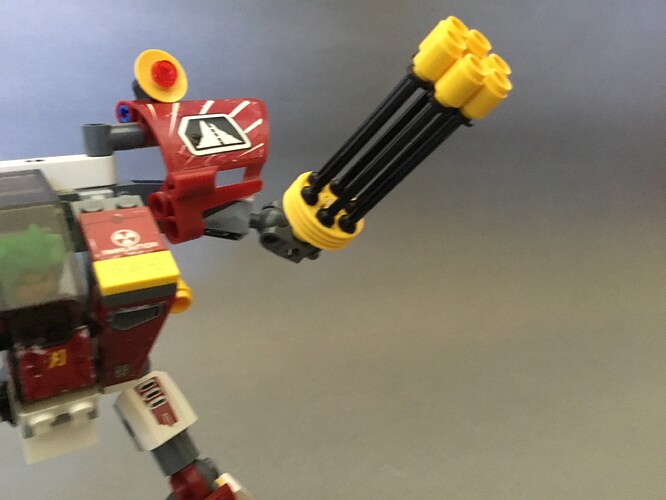 The left arm of the mech carries a large spinning Gatling gun, remarkably not comprised of spiral staircase columns. 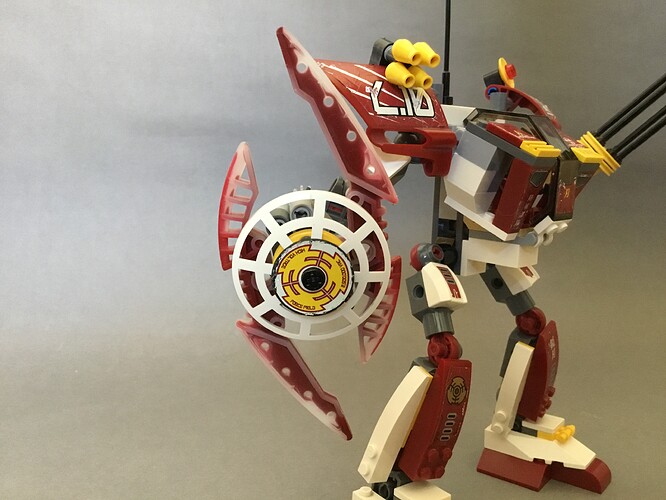 Meanwhile, the other arm is equipped with a spinning bladed shield. When the shield is spun from a knob on the back, the blades automatically extend outwards. Unfortunately, it’s a lot harder to get them to automatically retract, but it is possible. 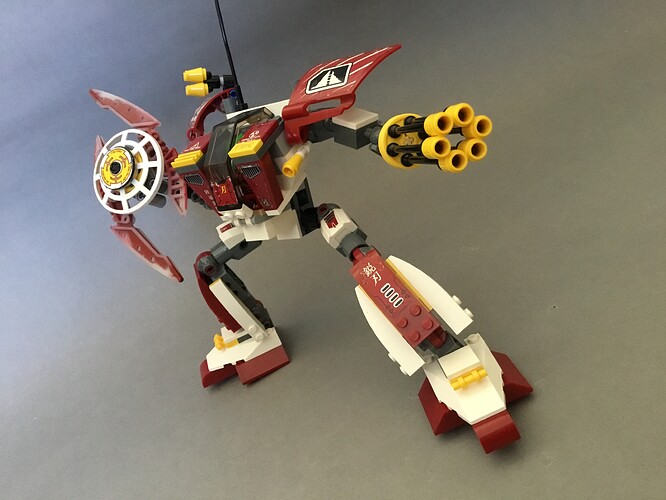 Just like the Sky Guardian, the Blade Titan is immensely Posable thanks to its sturdiness and stability, only this time it looks great too. 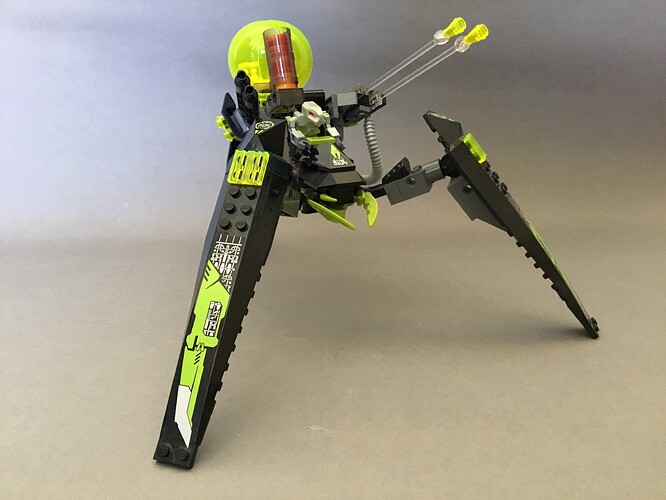 The Shadow Crawler, on the other hand, is essentially a brick. While it does have (minimal) articulation, it ultimately just amounts to it being able to, uh… crouch a bit, I guess. It’s certainly a unique design, being a tripod walker, though I’m not entirely sure if this different design was really beneficial at all. 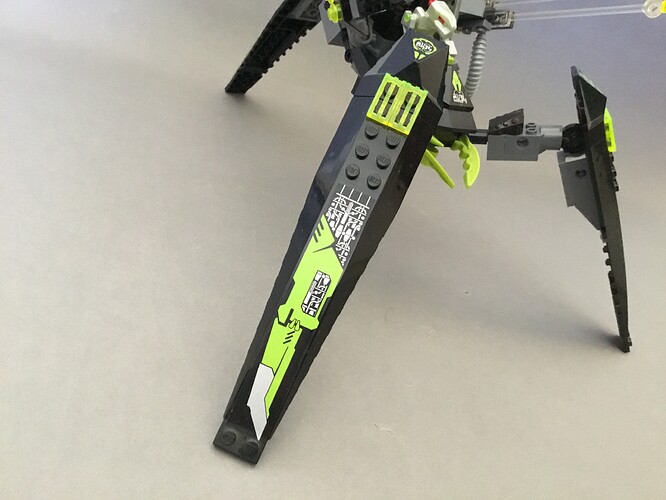 The front legs are identical, featuring only a knee joint and nothing else. They do look nice though. 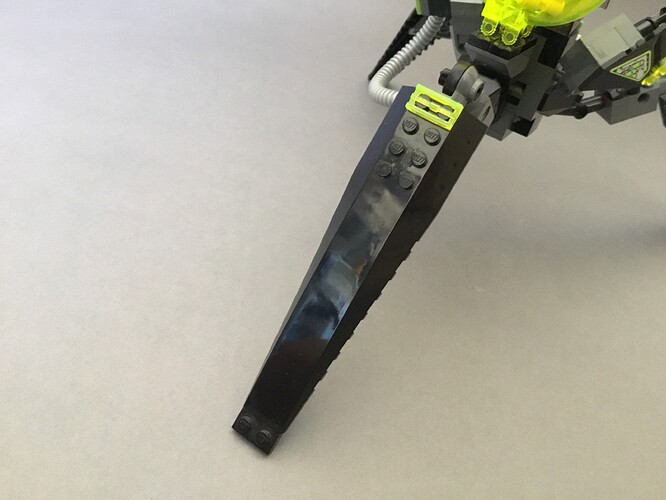 The back leg has similarly hindered movement, but it lacks both the knee spike and stickers of the front legs. This does make it look a bit plain, but it is at the back anyway. 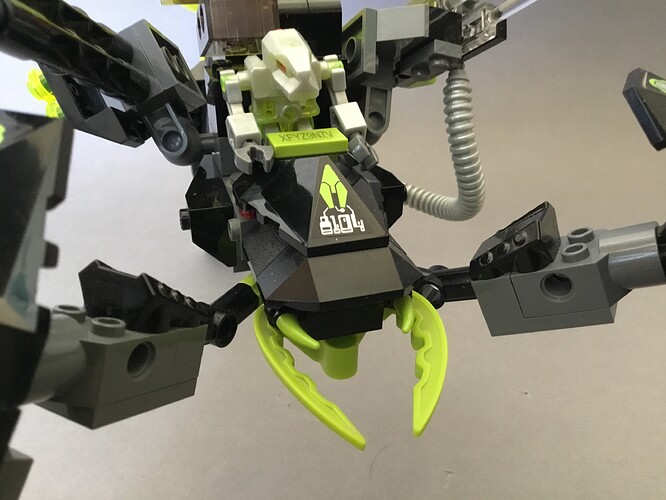 The body is shaped like a robot minifigure’s head with a pair of sharp mandibles made from a very nice lime Climbing Claw. A lime Exo-Code resides directly in front of the pilot. 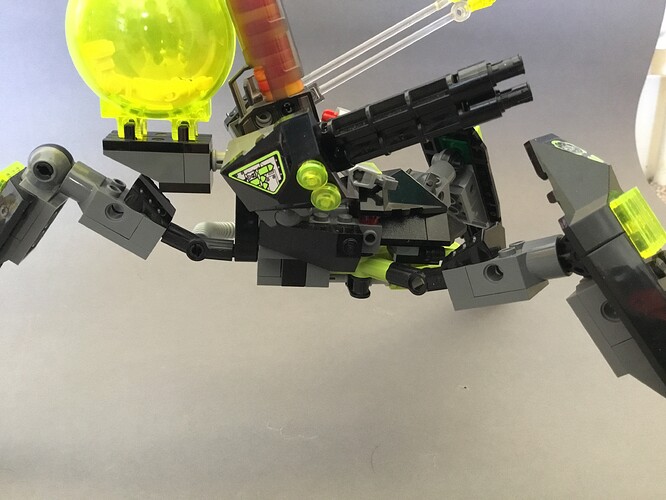 The right side features a now ubiquitous dual staircase cannon. 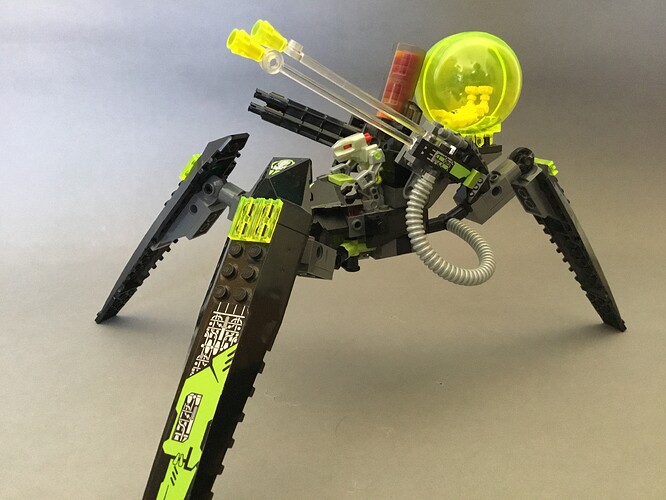 Conversely, the left side includes a long pair of transparent laser cannons, connected to an ammo hose leading into the back leg. 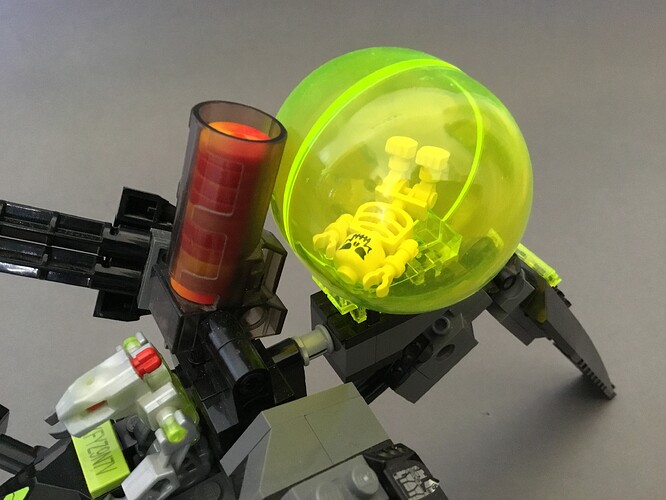 A disk launcher rests on top, directly in front of a prison pod containing a skeleton. Looks like the robots don’t realise humans need to eat to live.

Nowadays, these two sets can be found for roughly £16 each compared to their excellent £9.99 RRP. While I’d definitely recommend the Blade Titan, I find the Shadow Crawler to suffer from an extremely awkward, unarticulated design which ultimately makes it so much worse than it could’ve been.

8/10 for Blade Titan. The build is good, but finding one with undamaged stickers is near-impossible.
The Shadow Crawler, on the other hand, only gets a 5/10 score, the lowest of any robot vehicle so far. It’s just so hard to pose in anything other than ‘standing statically upright’, and it’s also much more fragile than all three of this years other mid-range offerings.

Next time, we’ll have a look at the second Exo-Force Special Edition set… 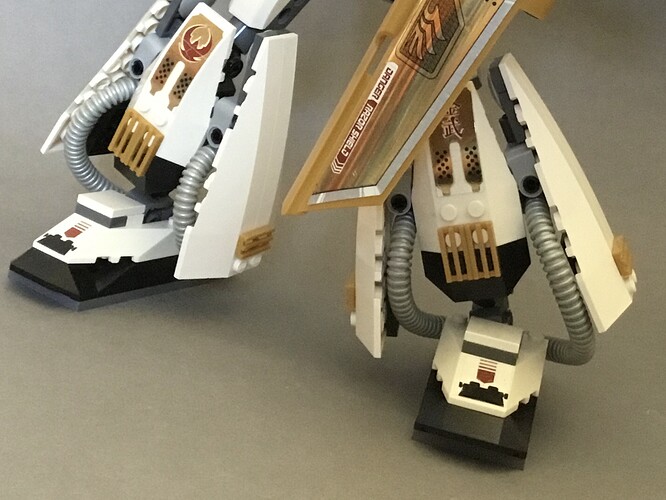 I really wish I had more exo force sets as a kid. Lovely review!

Very nice. I’m glad that you’re finally making these again.
Personally I like the look of the Shadow Crawler but the poor articulation really drags it down for me. The Blade Titan is fine.

Those dual molded Bionicle blades in the Krika color are amazing. I really wish we would have gotten more parts like that…

So That’s where that krika coloured takanuva staff weapon part comes from! also nice review, i learnt some things.

So That’s where that krika coloured takanuva staff weapon part comes from!

The funny thing is that this Exo-Force set was from 2007, while Krika came out in 2008. So technically, this set pioneered that color…