A while ago I shared some of the various weapons I had created. People seemed to like them, so I’ve made some more. Some of these weapons are paired with specific Mocs, while others are completely independent and were just created for fun.

First up is a polearm called Kredith’s Reach. 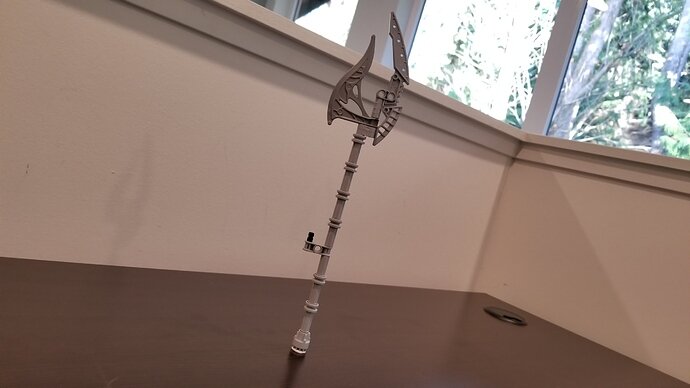 Kredith was a Great Being who, due to an insatiable curiosity, touched the Mask of Life with his bare hand. 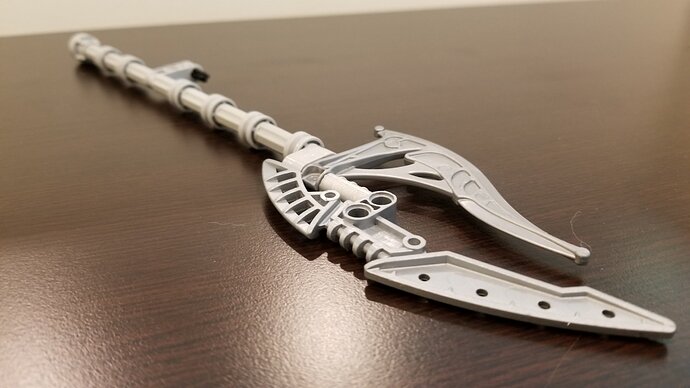 In response, the mask severed his arm from his body, and transformed it into a powerful weapon capable of healing any wounds it touched. 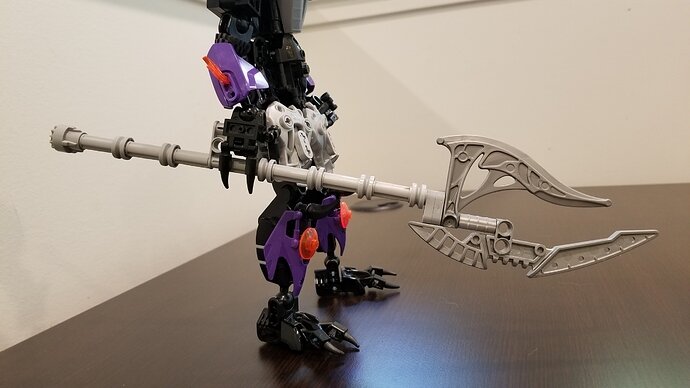 Few know what happened to the weapon after its inception, but over the course of history many have searched all over the universe for it, hoping to make use of its legendary healing powers. 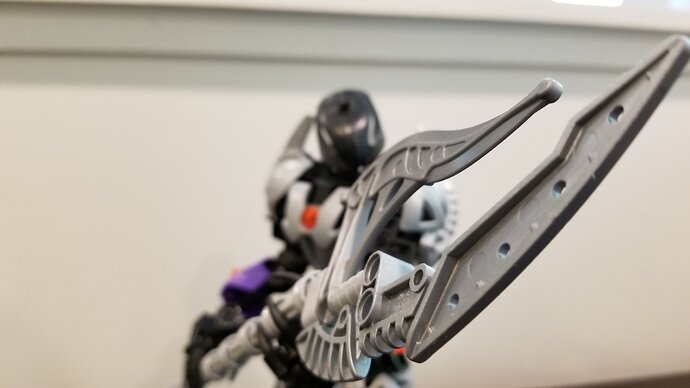 Next is an Xian short sword colloquially known as a Sonic Slicer. 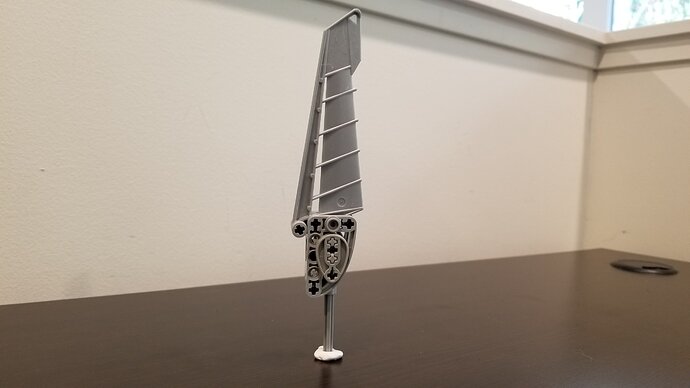 Sonic Slicers are one of Xia’s most popular exports, but those who manufacture them would never reveal to you their popularity. 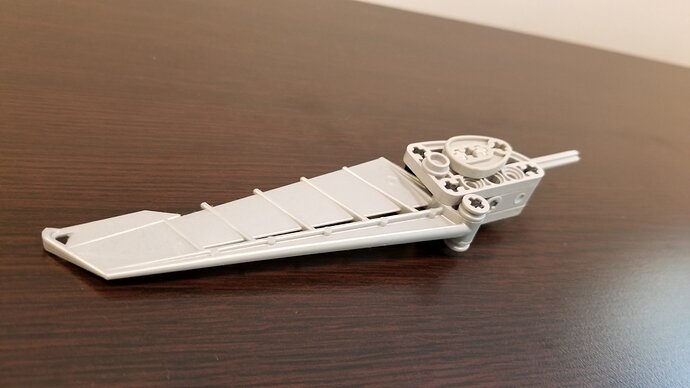 This is because these blades have a controversial reputation: they are commonly used by assassins due to their stealth-related capabilities. 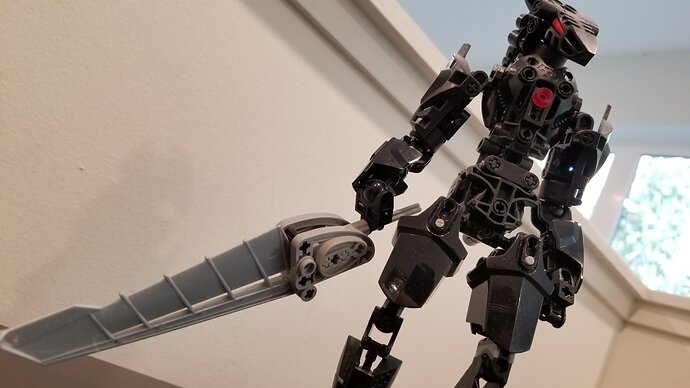 Sonic Slicers are not only sharp and well-balanced swords, but they also have special devices built into their hilts which absorb any sounds near them.

Do you think your target is going to let out a blood-curdling scream when you carefully slide your blade into their backside? No problem; the Sonic Slicer has you covered. 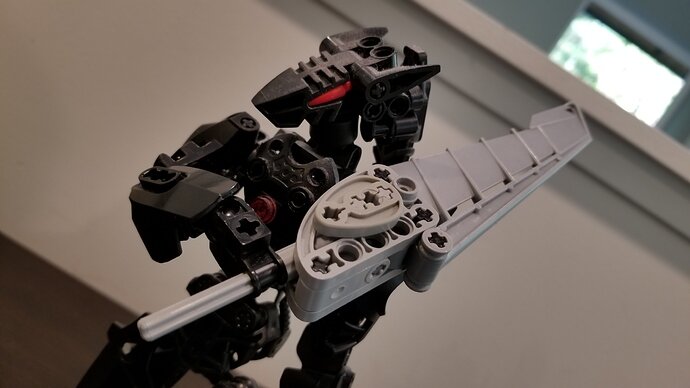 The last of the melee weapons is the legendary Blade of Angonce. 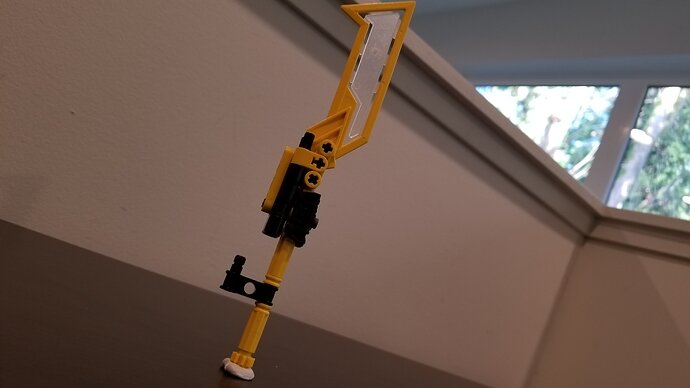 According to legend, this blade was once wielded by the Great Being Angonce, who used it to help shape the universe. 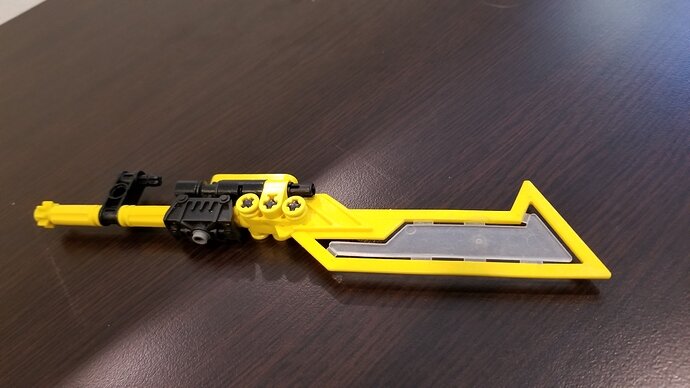 But eons ago Angonce somehow lost his blade, and it has only recently been recovered by a group of intrepid Matoran explorers. 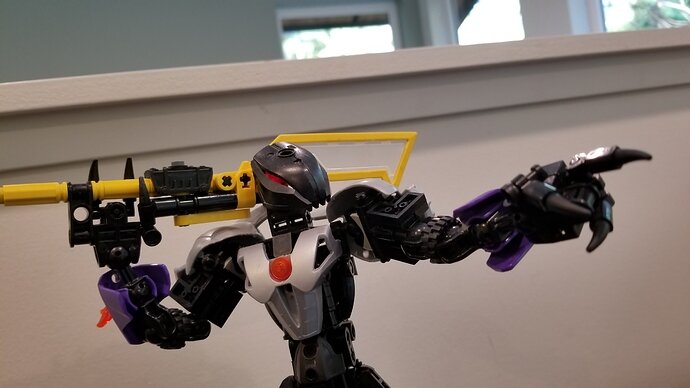 Or it could just be a fancy-looking sword. Many have doubted the claim that the blade once belonged to a Great Being, as it does not seem to posses any extraordinary powers. But who knows? Perhaps a great warrior may someday discover a way to unlock the blade’s hidden potential. 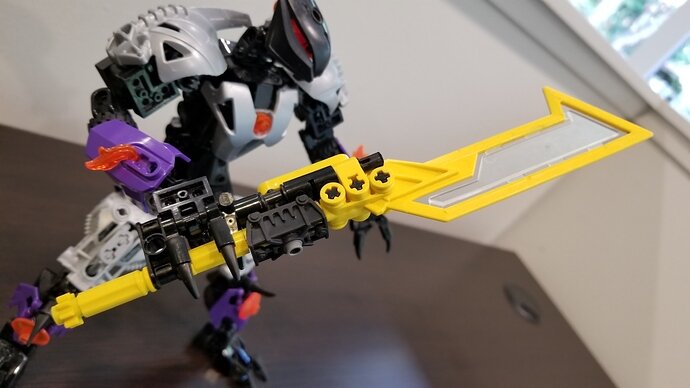 You may remember in my last collection of weapons I showcased an Xian energy rifle. Well, I’ve upgraded it and given it some lore. 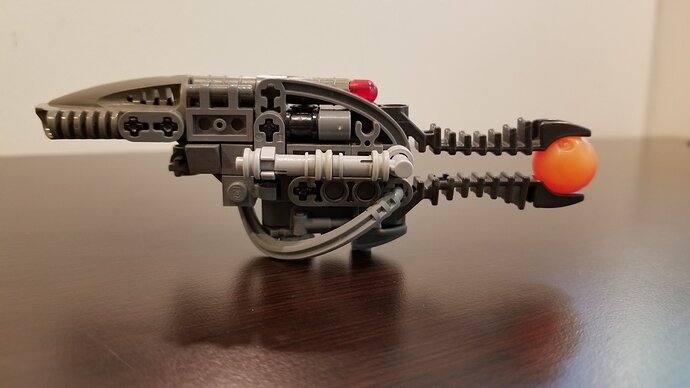 Like the Sonic Slicer, this energy rifle has proven to be one of Xia’s most profitable weapons. 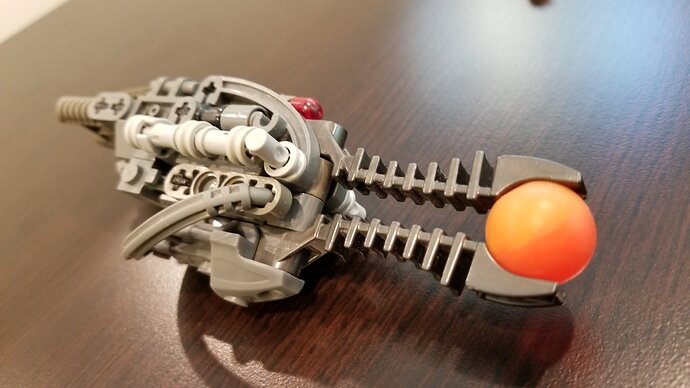 Commonly referred to as a “Beamer”, these rifles are often purchased by various militaries as armaments for basic infantry. 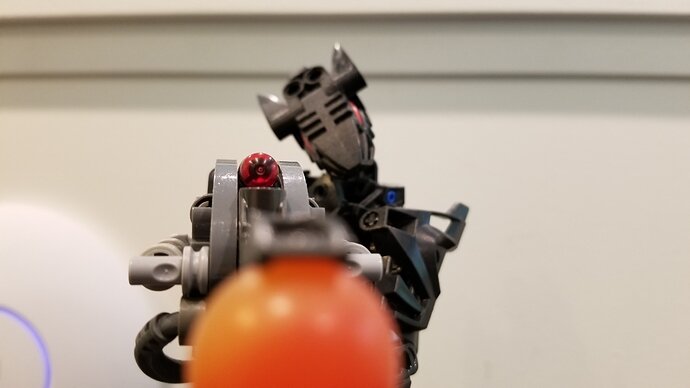 Their name is the result of their function: after charging up for around two seconds, Beamers release a powerful beam of energy, which can be sustained for up to a minute. 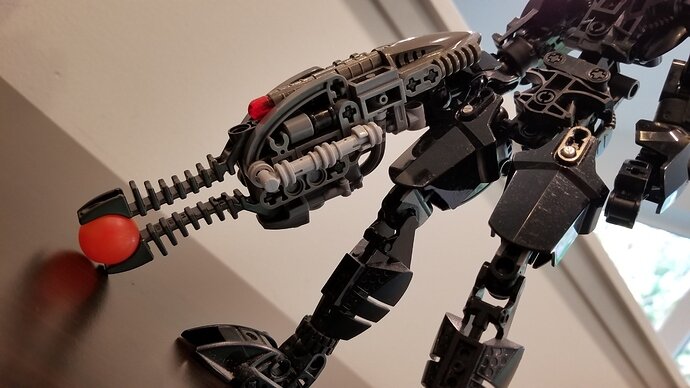 Next is an illegally-produced variant of the Beamer. 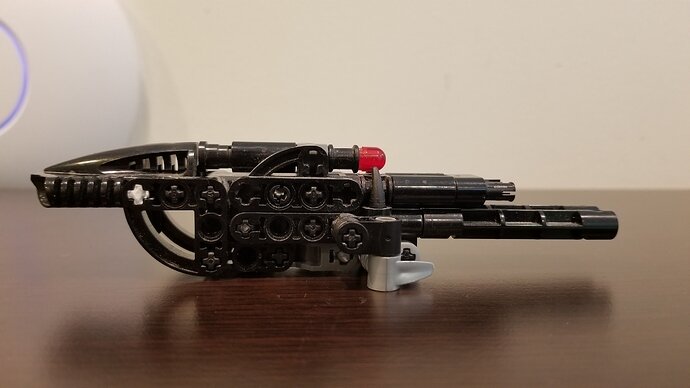 “Dimmers” are Beamers which have been heavily modified by the Dark Hunters to be even more powerful, and in most-cases, vastly more dangerous for the user. 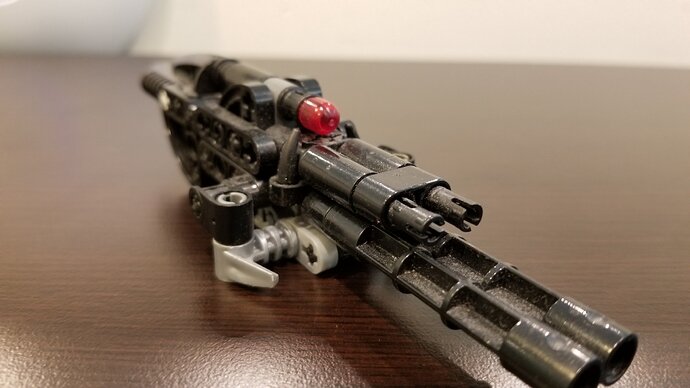 While Dimmers are able to produce lethal beams of shadow energy that can last up to five minutes, they are prone to malfunctioning, which usually results in a deadly blast of shadow energy being released directly into an operators’ face. 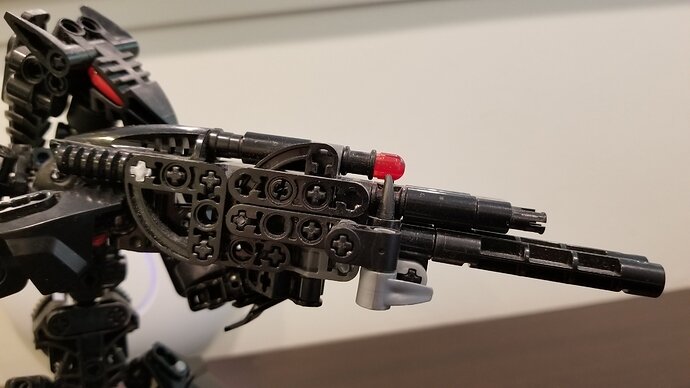 Despite this, Dimmers are popular among Dark Hunters, who enjoy their unparalleled lethality. 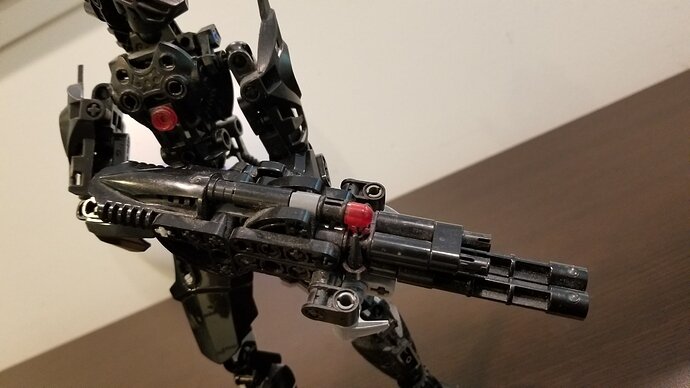 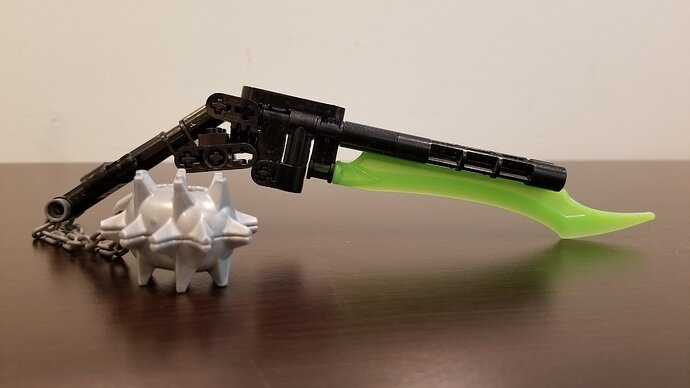 As the name suggests, this weapon was originally wielded by the brutal Skakdi warlord Nektann, who was apparently fond of its multiple uses. 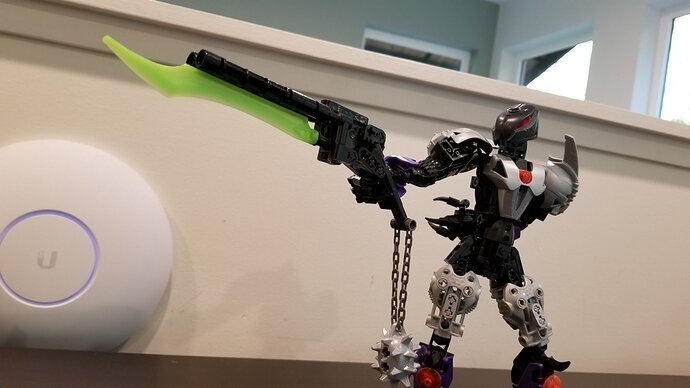 It can used as a pistol, sword, and flail, with varying degrees of success. Most of its users have agreed that it is best utilised as either a sword or pistol, and that the weapon’s supposed ability to be used as a flail is… debatable at best. 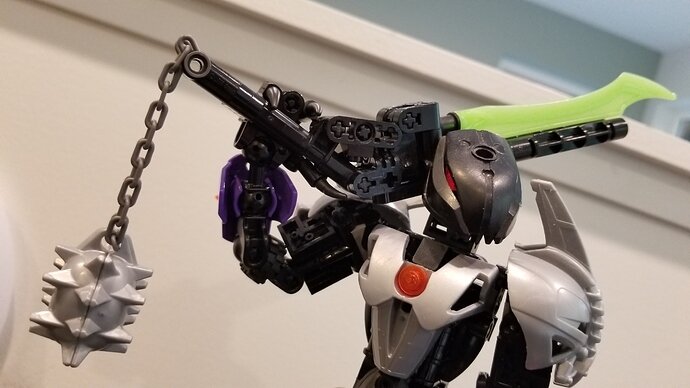 Recently it has come into the possession of the Dark Hunter Vaela, who believes that the weapon is “…about as graceful as a Zyglak, but at least as deadly as a Frostelus.” 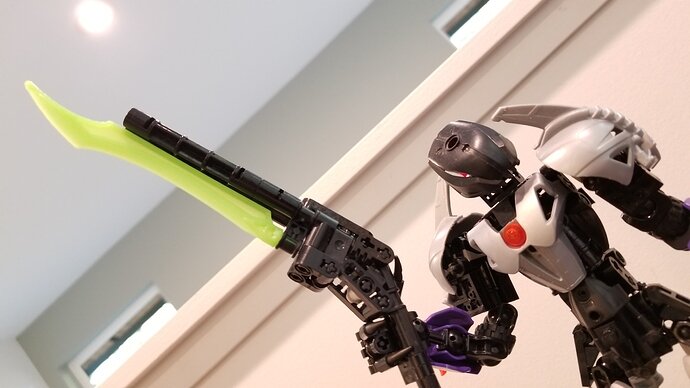 Relative to what? That thing looks like clouds buster sword!

These are pretty solid weapon designs,

Ok now then these are beautiful! Hope you don’t mind but I may end up ‘stealing’ a few of these designs at some point…