So, I’m finally back from my weeklong church camp (it was fantastic, by the way) and I’ve got some new drawings to showcase. If you’ll remember, last Sunday I posted a Marvel/DC Mash-up, or Amalgam, of two of my favorite characters, the Winter Soldier and Red Hood. So, now I have two more Amalgamations to show! 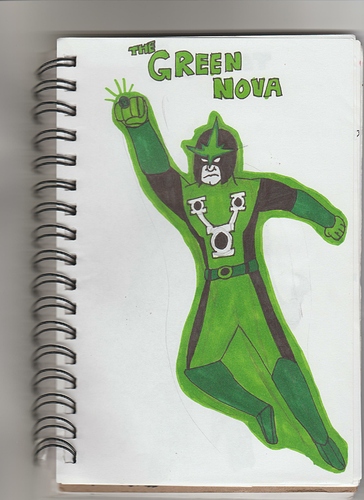 First, we have the Green Nova, protector of galaxies. This guy is, I hope, I fairly obvious mash up of the Green Lantern and Nova, and for this one let’s just say it’s the Richard Jordan Nova. Not much to say about this guy, so now onto… 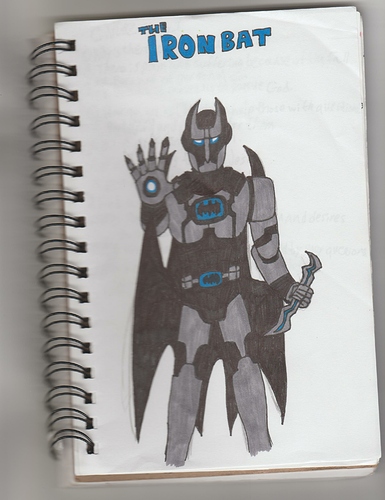 The Iron Bat! Bruce Stark’s parents were murdered when he was a child, and in the same accident his heart was damaged. Found on the brink of death by his loyal butler, Alfred Yinsen, he was brought back to Stark Mansion, where Alfred built him a makeshift replacement heart to survive on. This saved Bruce’s life. Bruce continually upgraded and added to this new Arc Reactor, eventually making a robotic exosuit to go with it. This suit was based on his biggest fear as a child; bats. In this new guise as the Iron Bat, he protected Gotham from any would be attackers, such as Alexander Stane (The Kryptonian Monger), Pamela Vanko (Whiplash), Dr. Curt Jones (the horribly mutated Killer Lizard.), and worst of all, the possessed serial killer Cletus Chill, The Laughing Carnage.

I very much like this one, feeling I found a really great mesh between the two characters. And, this is the only one I actually thought of a meshed-up backstory for, so there’s that. Red Winter is still the favorite of mine, but what do you guys think?

As always, C&C are welcome, and I will see you next time.

The iorn bat looks good, i would like to see more nice in the first one though, maybe try a hint of gold or blue, I’m going for a more San Alexander look.

I really want to see more!