This is my second artwork most here. For those unaware of it, mothman is a cryptid first sighted in Point Pleasant, Virginia, where he caused error for about a year, with the last sightings occurring several times on the night the silver bridge int he same town collapsed, causing several deaths. Described as a tall, headless humanoid with massive, owl-like wings in place of arms and glowing red eyes set into its chest, mothman has remained in cryptic lore ever since. He also is believed by some to have caused the chernobyl disaster (look up the blackbird of Chernobyl for more).
For an open-ended English project, I chose to make a list (with pictures and descriptions) of famous crypids based on accounts and descriptions of them, and this is my drawing of mothman. Using colored pencils, white out, and a large pen, I have created my rendition of my favorite cryptid. Tell me what you think so I can know if it’s worth including or I should keep trying. And yes, I know that the wing on the right is wonky, that he has no feet, and that the legs are weird (feet are hard to draw for him, I had to include legs for the sake of the project, and that one wing was hard to make the same.)
C&C are very much encouraged. 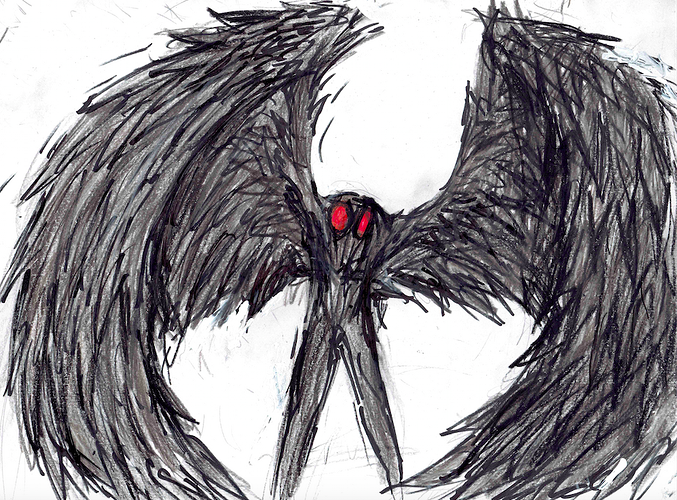 Mate, you need to upload the actual drawing. Then I can open it back up.

Very coolio, the feathers are very nice. I feel like I’ve seen this before.

You’ve probably seen something like it. He has been drawn many times by different people. I was inspired, but this is my personal drawing.

Well, it’s not very well defined. Honestly it looks like a flurry of black.

I remember what this reminds me of! Howl’s moving castle!

Well, it’s not very well defined. Honestly it looks like a flurry of black.

whoa those eyes, like they’re pearing into my soul

i love this drawing , and those wings are awesome. Good job

I am legitimately scared by this.
Good job?

I’ve always loved the lore behind the Mothman, so I can appreciate this just a little more

This is super spooky looking.