I frankly do not like the option without a tail. There are broken proportions and silhouette. 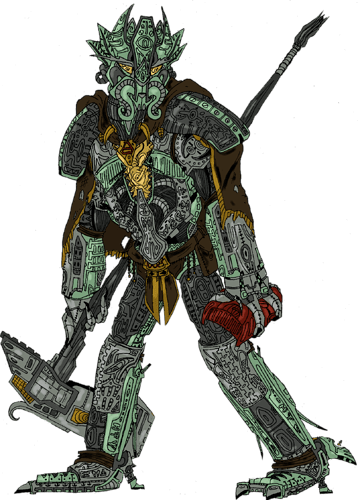 Frankly, why did you add the tail to the base model at first, if the actual moc doesn’t have one? Saying that Artakha is not a Toa, and he could have had a tail and wings is incorrect, if the winning moc doesn’t have those things, than the artworks shall not have them too. It’s not an ornate cape, that cannot be found in a lego set, it’s pretty simple to moc up wings and tails for the mocs. But Artakha was never described to have either, and neither have the moc, that every artwork of the 2nd portion must be based on, it’s not optional to add them or not, no matter what the rules say.

His legs do seem kind of thin now. However, adding just a little extra beefing to them could go a long way. I don’t think he looks bad without the tail though; Don’t be discouraged.

You have just under two weeks to resubmit! And, while I obviously can’t make you rework your art, I think I think it’d be worth it!