I KNOW,
most of my creations aren’t incredibles, I’m not a big mocer and I agree because I’m better with story creation and that’s why my main goal was to share you my universe, backstories and characters and I thought that share one character per day was a good idea, but since most of the replies I got just say “your creations are bad” and after the “ackar case” I decided to just stop, I’ll stay on the message boards but I’ll not post anymore…

Pics are mocs I was going to share during the next days and later for the non-finished.

“your creations are bad”

I want to see a link that leads to a such reply. The problem is not that your mocs are bad, but that you can’t handle criticism. Constructive criticism.

You must admit, that moc was Ackar.

Honestly, this topic is very pointless. Another “stop criticising my perfect creations and leave me alone” topic. No one, and I mean no one, wants to shout at you “Your mocs are bad” just to be a jerk. No. We are here to help you make better creations. But when you are not even trying to listen to us and consider anything that is not good about the moc as offensive… Yeah. Our goal is very hard to achieve.
And don’t even get me started on this photos. A few pics of some moc heads will never going to help in any way, shape or form.
Also, nobody come and told you “Dude. Post one moc per day.”, no. If you are not good at mocs, and you admit that, then don’t do this! If you are good at stories, and you admit that, then post one story per day instead!
No, that’s too much for a human person.
Then post stories instead!

oh, I can handle CONSTRUCTIVE criticism, just look at my other posts : 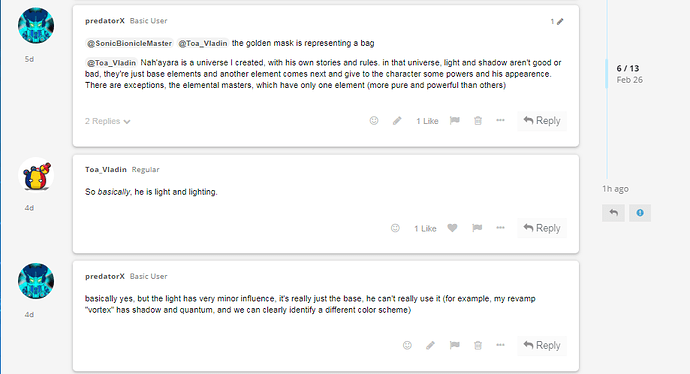 and now I have 1 question for you : Is this constructive or harassing ? 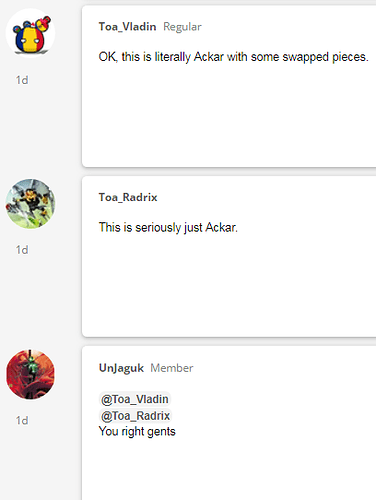 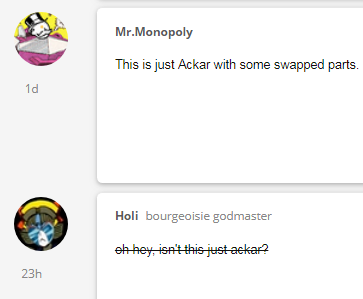 oh, I can handle CONSTRUCTIVE criticism, just look at my other posts :

First of, stop yelling. It’s disrespectful and it can easily get you banned.
Second, posting fragments of screenshots without context won’t help.

That was not criticism. That was me asking a question and you answering to it.

and now I have 1 question for you : Is this constructive or harassing ?

I would say it wasn’t harassment it was us explaining to you why you can’t swap 5 parts on a set and call it your “new MOC”. Sorry but it’s just not something you can do and the fact that you’re treating it as a personal attack rather than an explanation of what constitutes a new figure is somewhat discomforting. And you don’t have to “quit MOCing” because of it. Just maybe look up pictures of sets before posting MOCs?

One bad moc is not a reason to stop moccing, these other mocs clearly show creativity, I’d say take the current Takuen moc, work on it, get it closer to the image you want it in your mind, then post a second version.

Maybe make her female, make it obvious that she’s this chosen one. Just keep working at it and you get better, that’s what I do.

I don’t know exactly what people said, but I could guess. And, I would say, don’t let all of the criticism ruin your mocking experience. Weather the criticism was constructive or not, I still think you should take it all into consideration, but also take it with a grain of salt. And even if your mocs aren’t great now, you can improve by persevering, and trying out new things. You can do whatever you want, but I think it’s a shame if you stop posting, all because of criticism. You made some nice simple mocs that liked Sure, constructive criticism is all well and good, but at the end of the day, it really doesn’t matter what other people think. If you like to build mocs, then just build mocs cause you like doing it. Anyhow, that’s all I have to say. Also that second picture you posted looks really interestingly built.

idk, I need time to think but I may continue, thanks

Harrassment-aggressive pressure or intimidation.
We never harrassed you we never were agressive we never gave you pressure and we never intimidated you, you screamed at us in all caps that we were harrassing you, instead of asking a mod to close your topic or making a topic saying you were great, read the topic on moc tips

I don’t think your Mocs are bad. They just looked a bit too much like the sets

Hey. That is not harassment. That is constructive criticism. For the most part, it was you who was harassing us; screaming in all caps with bold enabled. And what do you do when you get criticism? You learn from it. Take my self Moc for example:

This is my self-Moc, Photez, Master of Energy. He can control Energy, and wears the Kanohi Kraakahn, Mask of Shadow (With horns). [image][image][image][image] Well, that’s that. Scroll down for improvements.

Then look at the comments. I was told what needed improving, so I improved them. You can’t expect to not get any criticism on Mocs, everyone does.

All your ‘examples’ in that post are, for the most part, constructive criticism. You defend your creations saying that the places which need improvement are ‘batteries’, or ‘propulsors’. Just because they’re propulsors doesn’t mean they don’t need improvement. Everything needs improvement. Nothing’s perfect.

But as others have said, most of the time, your Mocs look a bit too much like actual sets. That’s all we’re saying, while you seem to be treating this as a personal attack. So just learn to take criticism, it’ll make your Mocs better.