Hello, I’ve been quiet ever since I joined here but ya know how life gets in the way…

Anyways, I thought it would be really daring of me to show my MOC creations here. This isn’t something I normally do since making and creating was always a personal thing for me to do while I’m taking a break or needing a break from the world.

To keep the story simple, I was born with Asperger’s Syndrome which is a form of Autism. Because of this, I got into art and became an artist because I developed a desire to create. Creating is something that helps me keep a steady mind when things get tough, so this is a huge reason for why I got into Bionicle.

Because of work and art projects, I only ever work on MOCs at random times a day, sometimes even going a month without progress since I occasionally get too busy. So that being said, these are not fancy super-cool creations and are somewhat limited to particular parts.

Despite that, I still have three MOCs to show here that, hopefully, people will like. They do keep a familiar look since I plan on making a proper team of six characters, but they also have particular designs, shapes, and gimmicks that are the sole inspiration for each of them. They use both G1 and G2 pieces but mainly use the CCBS skeletal frame with some exceptions: 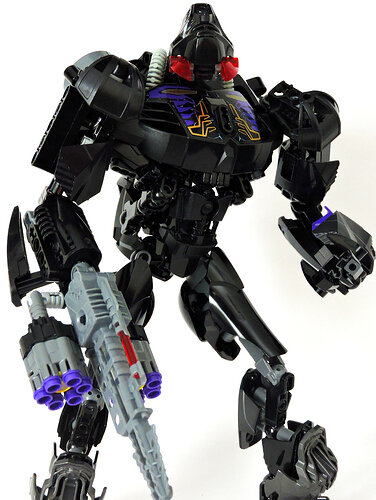 Bio: Gunklar is a large and intimidating foe that loves to create explosions for his own enjoyment. He accidentally exploded his own arm off during a battle years ago and has since then replaced it with a unique artillery gun arm, an arm which is also powered by a dual generator on his back. Despite his sadistic desire to cause destruction, he has a very upbeat and fun attitude.

Weapon facts: His weapon can shoot in many directions of choice, Gunklar placed intricate chips into the two additional rotating blasters that allow the gun to be almost self-aware of where targets are.

My inspiration for this MOC was mainly the Transformers character Shockwave. This was originally an attempt to make a Shockwave MOC years ago but eventually it evolved into its own thing after I was unable to make a cool enough Shockwave.

The body kind of looks like a really bulky Onua, but I had to use that cool chest piece for this MOC no matter what. 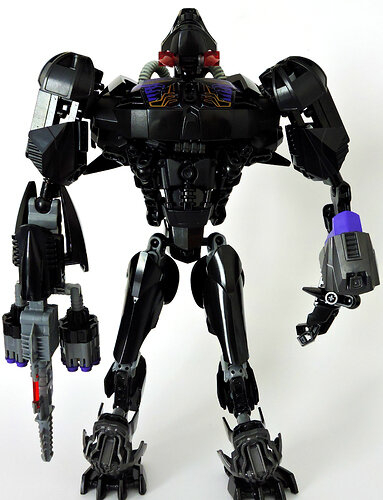 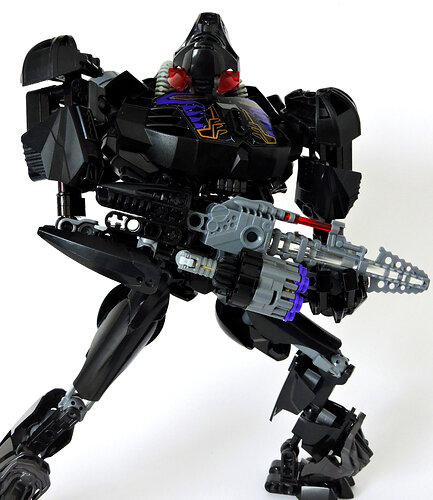 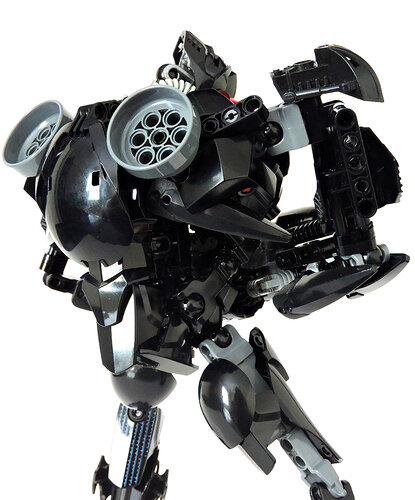 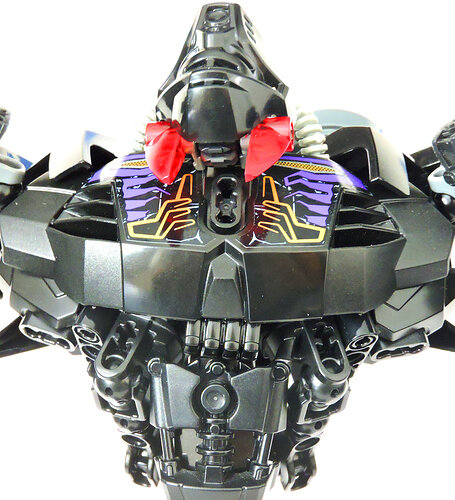 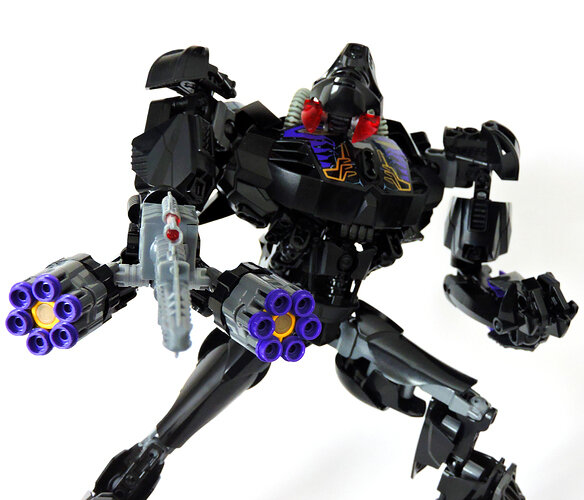 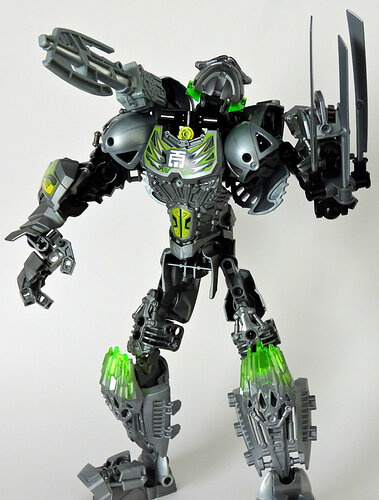 Bio: Shrakel is a calm and silent warrior that waits for the opportune moment to strike. Nearly his entire body is covered in metallic armor that is near impenetrable. His body can also bleed an acidic substance that he usually lathers his blades in. He is typically seen as the leader of the group despite not shouting orders of seeming to care about his teammates.

Weapon Facts: His wrist blades are a surprisingly good use as both a stabbing and blocking tool. His shoulder blaster can shoot an object almost 50 miles away.

His inspiration was simple, I wanted to make a pretty cool looking samurai warrior. Originally he had a long sword but I scrapped that idea since it looked silly on the MOC. The wrist blades look was a last addition and I quite like it even if it’s a bit too simple.

Perhaps he does have a bit too much Lewa in there, but I dunno I still like it. 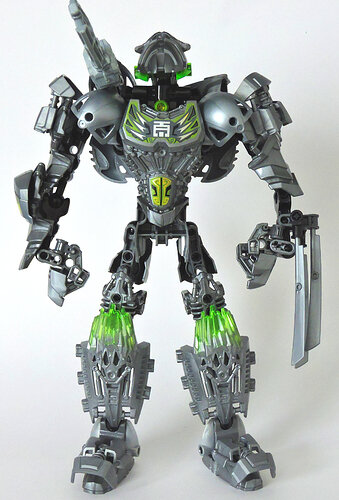 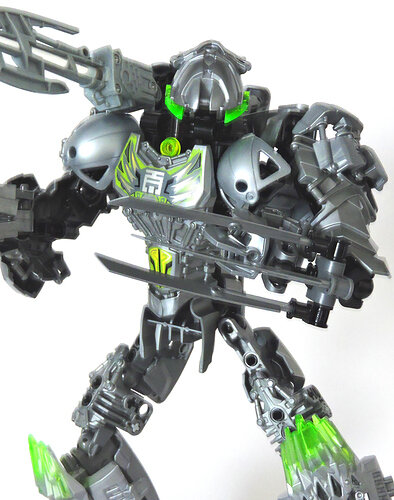 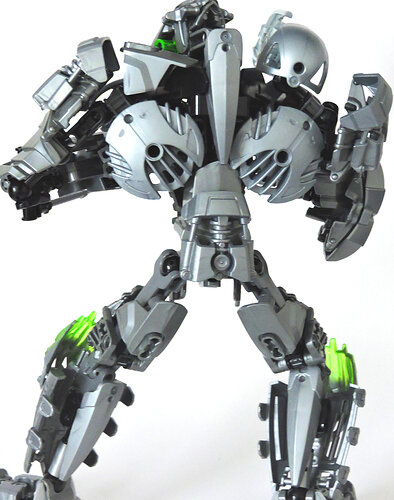 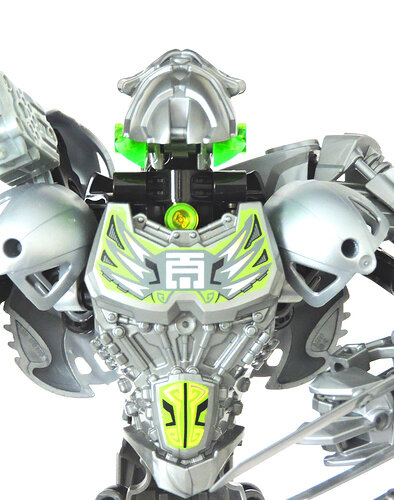 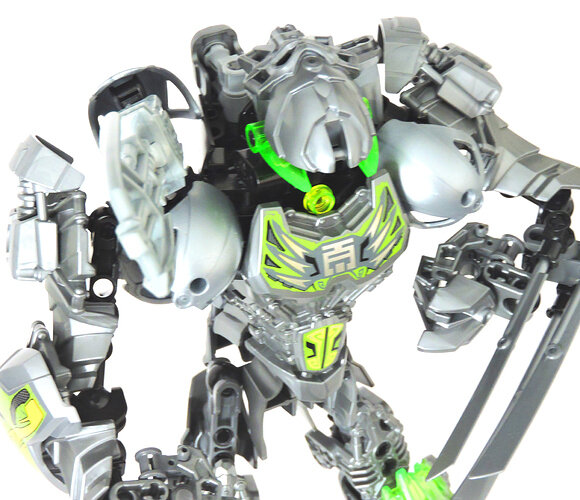 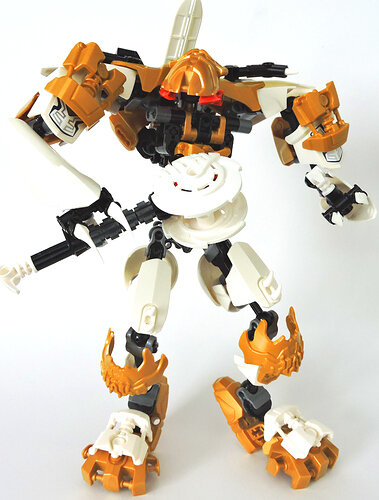 Bio: Jawzek is a creative inventor that has helped his team by making horrific and powerful machines. He looks down on his peers as being simple-minded fools and hopes to one day seize the world for his own selfish desires.

Weapon Facts: He carries his own personal creation known simply as minion, which is a small robot creature that aids him in combat. His Saw Mace is a useful tool for both creating and destroying.

I’m not gonna lie, this one still needs a bit of work. His arms are mostly what need help, since they like to slide out of socket too easily from time to time. The inspiration was just wanting to do an alternative take on the uniting gimmick, not much else really. 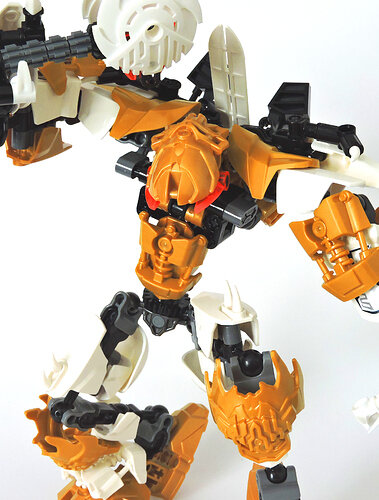 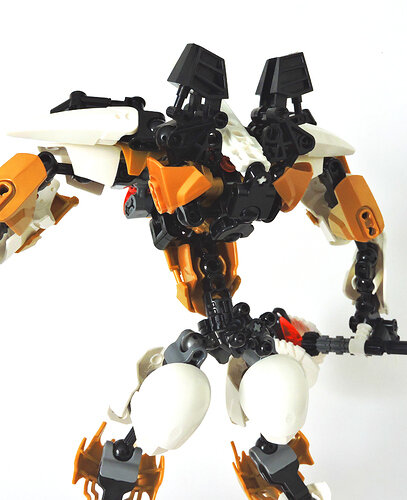 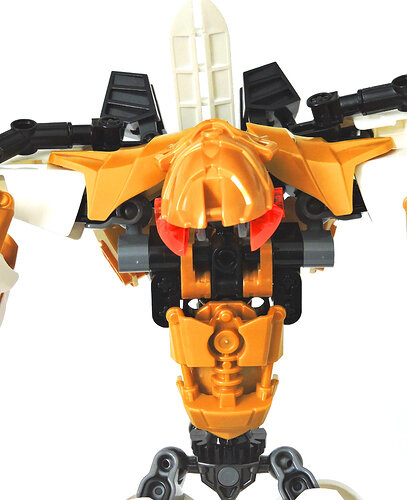 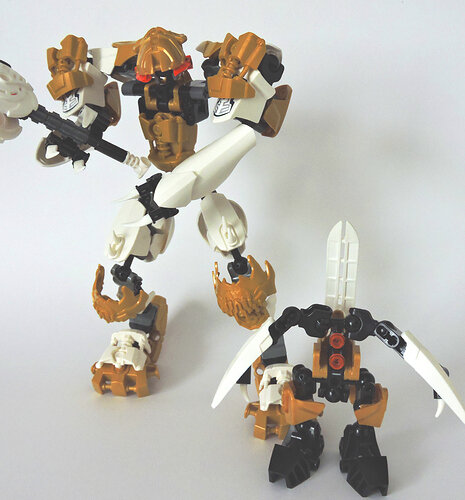 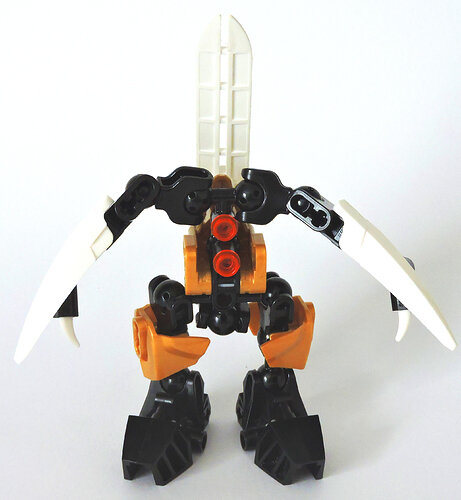 I hope that these aren’t too simple but I did have the mindset that these could be like there own fake sets. I’m actually kind of hoping to make fake box art for each of them in the future.

They do not have a group name yet and I still plan on designing three more characters. They will all have the same concept of an upwards mask head design, but have completely different builds in body and weapondry.

If anybody has any ideas of what the next three should be like, or even any suggestions on how to tweak these MOC’s, I’ll gladly listen. Even color combinations would help me out too.

This is again a first for me to show these MOC’s so thanks again to those that end up liking them!

I was born with Asperger’s Syndrome which is a form of Autism.

he’s a big boi. Most of him is passable, though not really techniques I like, except for the upper arms. I’d scrap the whole thing and go with something simpler. Aside from that, try to spread out a little more purple across him, and possibly the gunmetal, though personally I’d remove the gunmetal entirely and concentrate on black and purple.

Using those Onua Master claws as shin armor is a really interesting choice. I don’t like the Nuva shoulders on his torso - they break up the shaping in his torso - or the Bohrok claws on the back, they create a large gap over his armpits. I don’t think he has too much of Lewa in his design.

First off, his gold looks more orange in the pictures you’ve taken. Beyond that, the main thing I’d fix is to cover his torso up a bit more; specifically joint attachment for the shoulder armor.

I hope that these aren’t too simple

Complex doesn’t make a MOC better - I have plenty of terrible complex designs I could show you. It definitely seems like you’re making good use of what you have, as there’s a lot of designs in here that are pretty unique, especially on the feet and hands.

I really like these! They have a very unique aesthetic that I think really works. I like Shrakel the best, he has so many cool techniques and interesting usage of pieces. P.S. I don’t think he has too much Lewa in him

I like the use of the g2 masks. I’ve always liked bohrok va heads, and these feel similar.

It’s been a while but I’ve done some updates on these MOC’s and I’d like to show the progress. 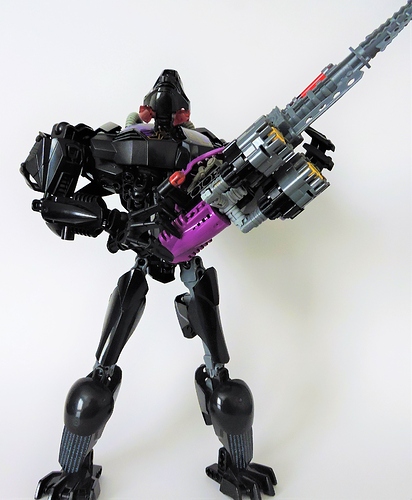 I changed this guy quite a bit. I took away the idea of him having a gun arm because any alterations to that didn’t look good to me and it proved to be too heavy no matter what friction i threw in there. Now he holds it with two hands. I also changed the look of his upper arms and gave him Onua claw hands.

Now changes to his story is that he killed a Toa hero and now uses that Toa’s Kanohi Mask to power his weapon. 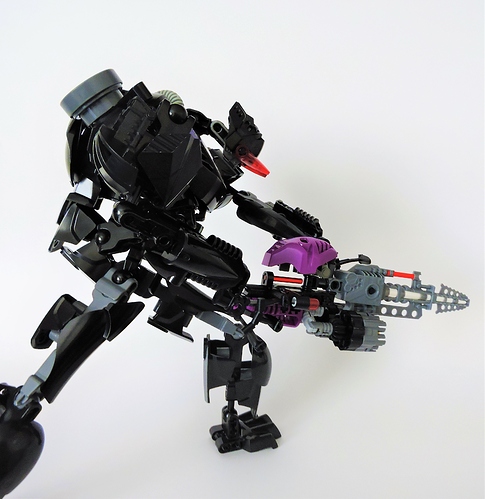 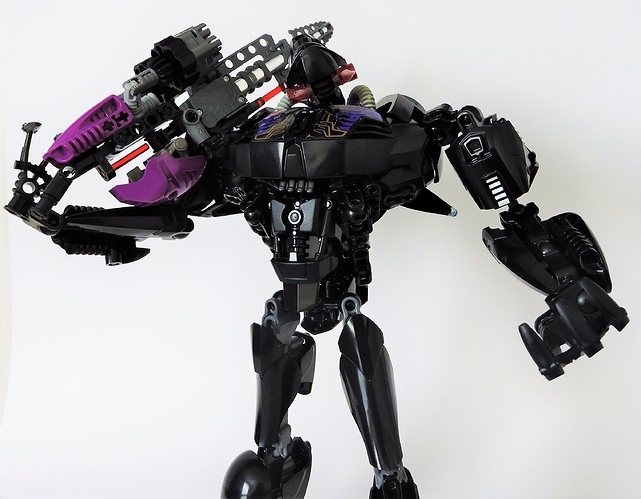 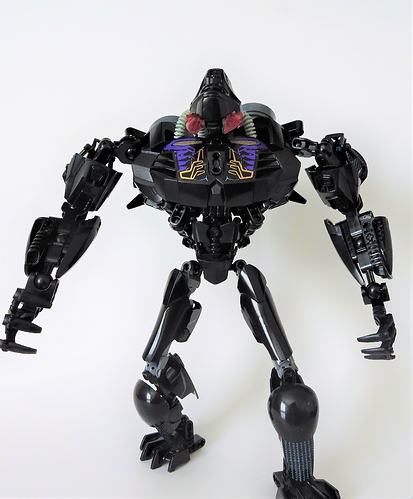 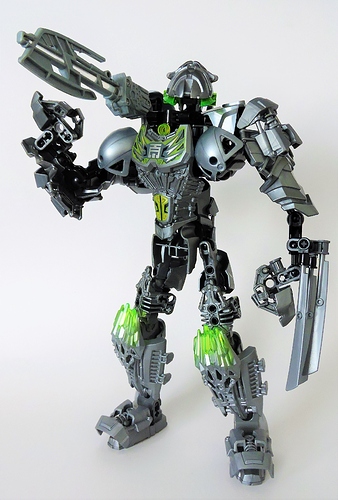 The only change here is that I got rid of the Bohrok shields as suggested. This now gives him more movement in the shoulders. Not much else to say here really.
His back is a bit exposed but I can live with it… 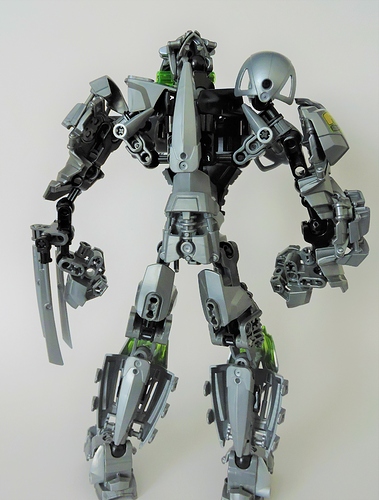 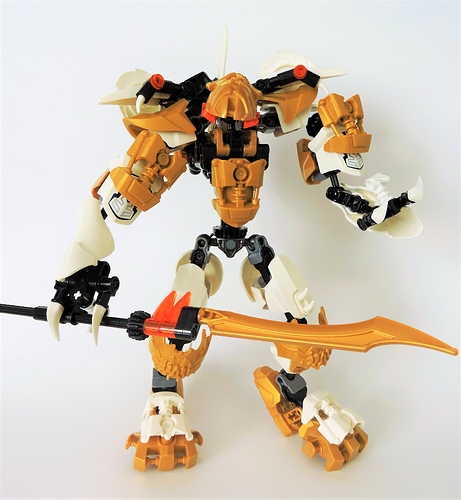 So with Jawzek I changed his weapon to a staff, I fixed his arm connections and I changed the minion a bit. His minion can also rest on his shoulder armor and back a lot easier.

I also altered his hands a bit to make it more “natural” when holding the weapon. 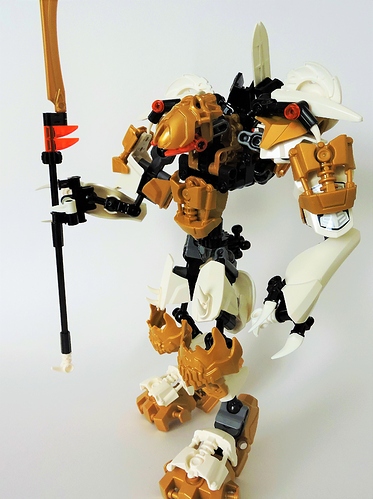 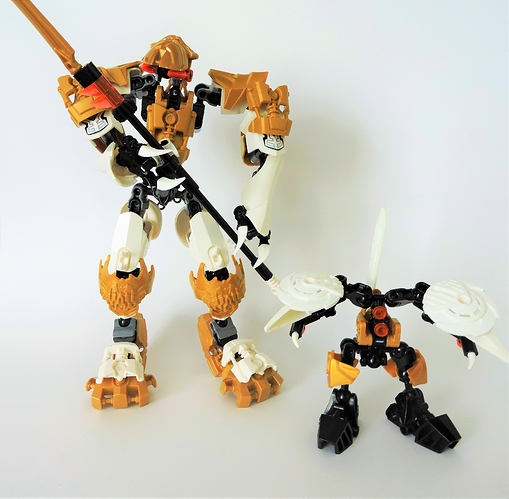 I want to thank everyone for liking these weird MOC’s and for the suggestions and advice!

EDIT: I left out a couple things of information since I wrote this pretty fast last time…

I love these! They’re giving me some inspiration. Great job!