Hi I'm Meowfyre and in this thread I'll be showing off my Rahi MOCs! 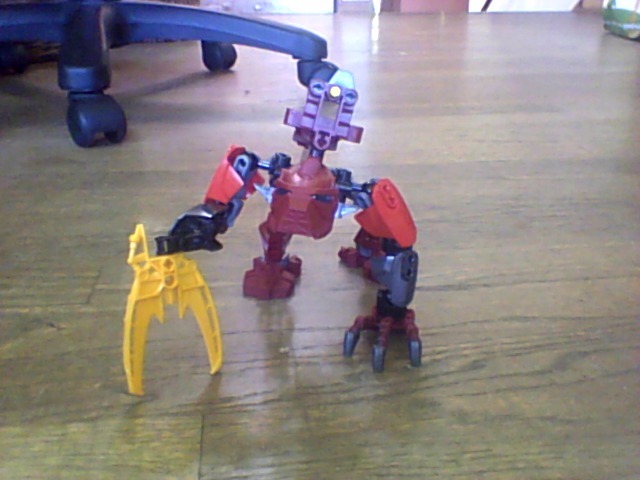 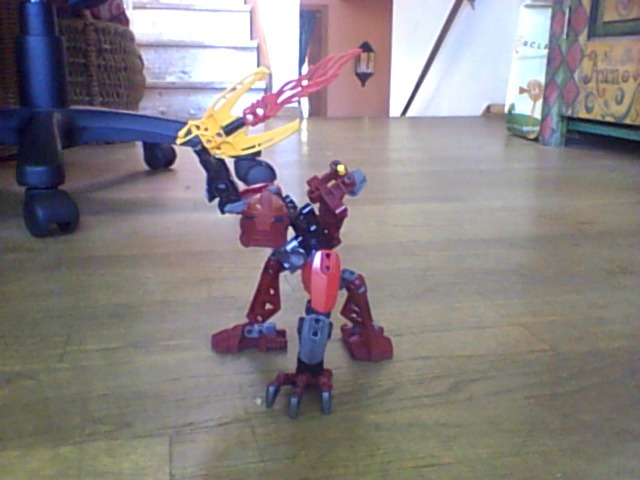 Though the Toa Metru were cured of the Hordika poison, they are few among many who have been subjected to the venom of the visorak. Many more have succumbed to the beast within, becoming Hordika. These once noble Toa are enslaved to the Brotherhood and unleashed upon the battlefield when friendly casualties are not a concern. Now fully succumbed to the beast their form has lost all that was once Toa. Their strength? Savage Their speed? Vicious. They fight with the subtlety of a charging Kane-Ra Bull and all who hear their hunting cries fear for their lives.

This a MOC of a fully devolved Fire Toa. I imagine that the point of turning Toa into Hordika is to create more troops for the brotherhood's armies. Seeing as they are wild beasts they usually can't be controlled on the battlefield, just that they can be depended on to hunt. I hope to make more of these eventually! 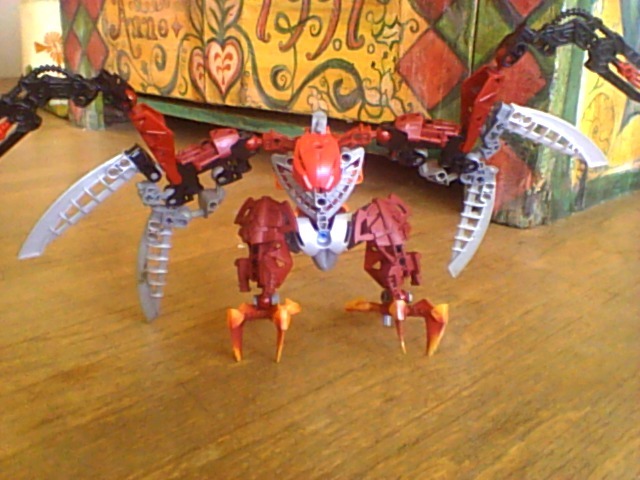 In the Matoran Universe there is a island known as Jiraak Nui, but it is more well known as the Savage Island. This Island is home to many dangerous Rahi and the danger of it is infamous. And among all these dangerous Rahi, it is the Raakii Bird that rises to the top of the food chain. It's large wings allow it to cruise high above the ground and it's keen eyes spot pray. When it spots prey it dive bombs it, feet first as it's razor sharp talons are prepared to rip and tear. If the initial dive bomb is unable to fell it's prey it will hover in the air at the same level of the prey, kicking to damage with it's talons. When it's prey is felled it will grab the corpse with it's massive talons and lift it up to a difficult to reach location, such as a cliff, to feast.

Yeah. It's a bird. Don't got more to say about it then that.

Nice MOCs you have there! They have very unique designs.

The random keetorange for the weapon on Vakama/Fire Hordika looks most odd. I recommend replacing it with the silver one.

Also, the bright red looks out of place with the dark red of everything else. I recommend getting a hold of Pyrox, if you can, for some Dark Red HF Armor. Otherwise, looks fine, IMO.

As for the bird, I think the wings are oddly spaced, but then, I can't do much better. The Nuva chest armor has contradicting shape right underneath the Hordika chest. Maybe get a smaller armor piece to go there.

If I could I would use the silver one but I couldn't BLOODY find it!

Thanks for the tip on the Pyrox, I'll be sure to keep an eye out for that one!

I'll see what I can do with the bird armor.

I really like the Raakii. It makes me think of a dragon-type thing.

Made a slight mistake. Pyrox only had dark red torso piece, and armor add-ons. The rock style, to be exact, not normal armor.

I recommend Chi Worriz instead. 'Cause he does have Dark Red normal armor.