Charlie Bucket is a human not based on any SU character.

Veruca Salt is a Aquamarine.

Violet Beauregarde is a Lapis.

Augustus Gloop is a Topaz.

Mike Teavee is a Peridot.

Grandpa Joe is a human and is the only parent, the other 3 “kids” don’t have parents. Same with Charlie, Joe is not based on any SU character.

Slugworth is a Zircon.

In this universe the rebellion never happened, gems and humans always coexisted with one another. The diamonds never colonize planets and were pacifist. Pink diamond was treated well by the diamonds then she decided to be Rose Quartz, the diamonds were fully excepting of her new form. Before she changed her form she met the Crystal gems (Garnet, amethyst and pearl) at a café after that they became best friends. A bit later in her life after she met the Crystal gems and had a new form. She noticed a concert that was going on so she decided to watch the concert. She saw one Greg universe and she was totally in love with him. After the concert she got a chance to talk to him. She asked him on a date. A couple years later they got married. There were happy for many years and then she sacrificed her form to give birth to Steven. The Crystal gems and Greg raised Steven through the years.

The Origins of Rainbow Quartz 2.0

While Garnet was teaching Steven how to fuse, Steven was moving a lot in his chair and eventually fell out of his chair and knocked pearl over both laughed at the situation and then they fused. After that Steven and pearl started to fuse a lot. They loved being Rainbow so Steven and pearl both decided to tell everyone about becoming a permafusion. After telling everyone and then fusing, Rainbow thought of a chocolate factory. Rainbow worked hard at a candy store to get enough money to build a chocolate factory. Eventually after all that work the factory was built then opened.
What do you guys think? Please leave any grammar mistakes and critiques but please be constructive and respectful.

I hope that this doesn’t come across as rude, but why? Why Willy Wonka?

I thought about the au because of this image of Rainbow. It reminded me of Willy Wonka from the original movie. I think Rainbow 2.0 has some wonka qualities to him. 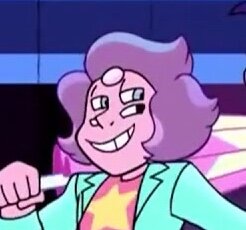 Ps. You didn’t come across as rude and I don’t blame you for asking that question because it is kinda a weird idea if you think about it.