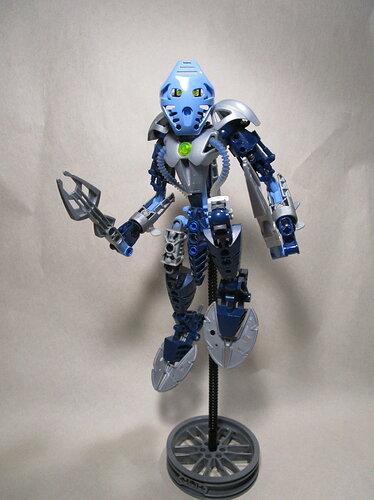 Name: Natare
Titles: Toa, Sister, “The Takea”
Species: Ga-Matoran (Toa)
Gender: Female
Element: Water
Mask: Kanohi Pakari, Great Mask of Strength
Home Island: An island in the western chain of the Southern Islands
Weapons: Twin daggers
Backstory: Natare was once a Ga-Matoran Sailor from the Southern Islands, and she was an unnaturally strong swimmer, even compared to other Ga-Matoran. Natare enjoyed racing Takea Sharks, often out-swimming them. At some point, a Turaga visited Natare, and gave her a Toa Stone. Upon receiving the stone, Natare was transformed into a Toa.
Personality: Natare is a caring and proud Toa, and occasionally she can come off as boastful. She has always known about her exceptional swimming skills that rivaled most Toa.

On to the build! 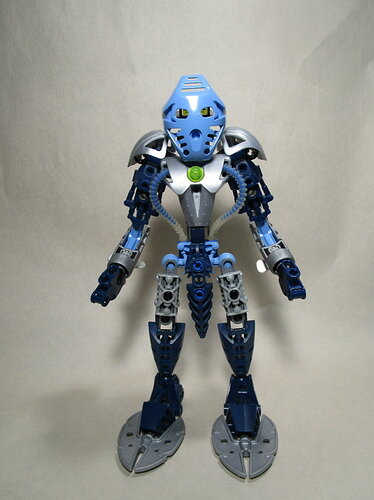 Unfortunately, her arms can’t bend. If I had more light-blue pieces, I probably would’ve tried to make her arms flexible. I also would’ve liked to add light blue to her legs, which are currently rather basic. 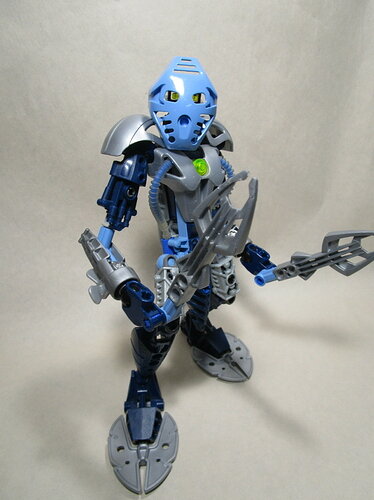 This picture shows Natare with her twin daggers. It took me a while to decide which weapon I’d give her, but I finally went with these daggers. 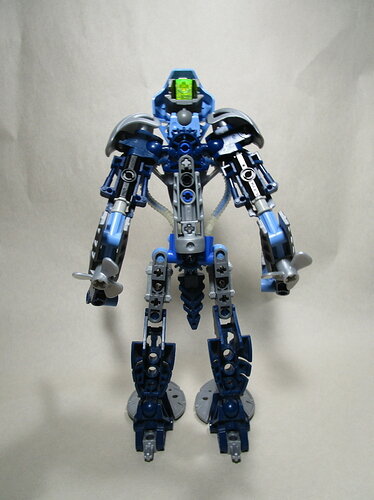 Here’s a picture of her back. I added some propellers to her gauntlets to improve her speed. 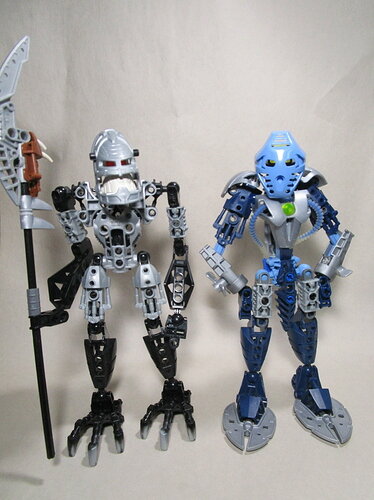 Finally, here’s a size-comparison with Vezon, my favorite canon character.

Trivia: Her name, “Natare” is the Latin word for “swim”; and I was inspired by @BlackboltJohnson to give her an unusual mask for her element of Water: the Kanohi Pakari.

Well, that’s all for now. Thanks for viewing!

Very nice. My only critique is the visorak foot on the… ahem… Crotch area. It just looks odd to me.

Thanks! Yeah, the Visorak foot is mostly there to fill in the armor, but I’ll try to change that.

Might I suggest a silver or dark colored Bohrok eye? it should blend in nicely.

Yeah, I can try that.

On a different note, where did you find that sand blue waist piece. That’s a nice color.

It’s actually not sand-blue (though, a sand-blue waist is used in Vezok), and it originally came with Thok, though I got it in a random lot of pieces.

though I got it in a random lot of pieces.

So basically it’s a Gali Nuva revamp with a different mask.

Looks good though, and I like the color scheme.

Wait a sec… she looks familiar… 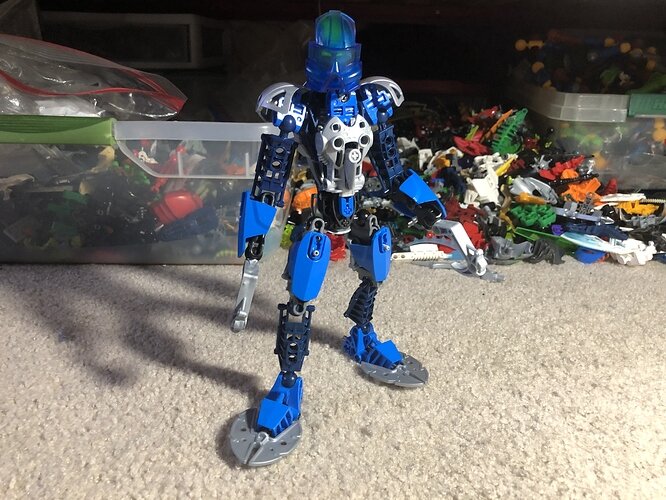 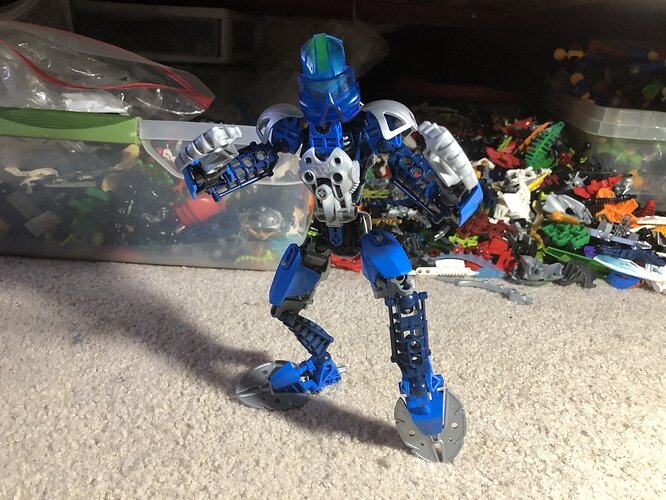 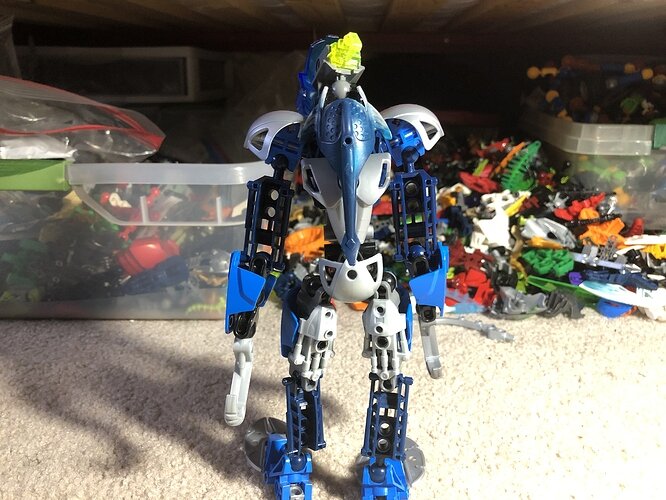 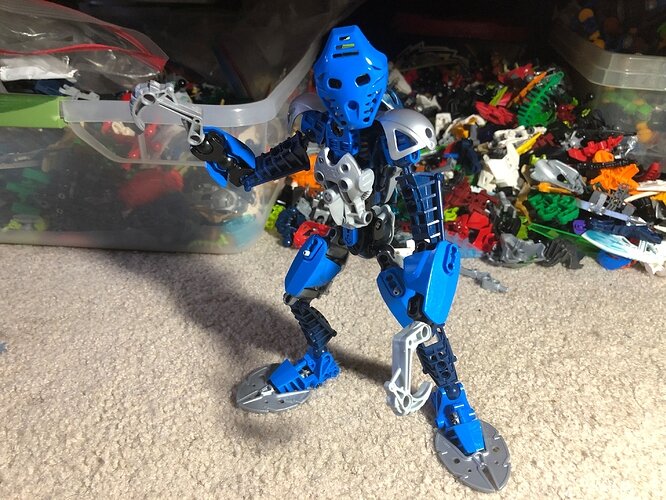 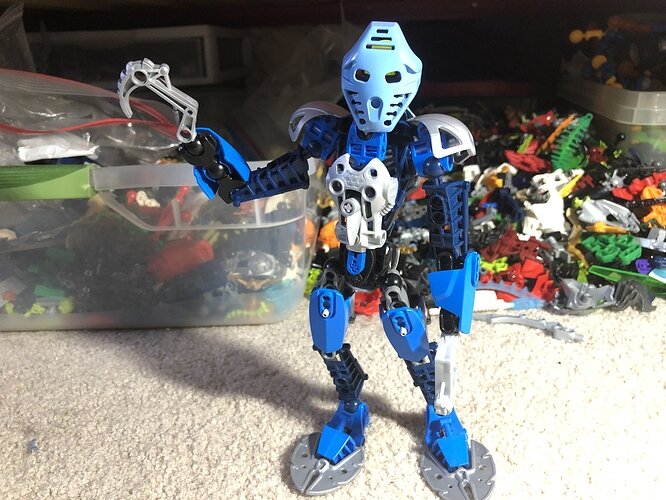 So basically it’s a Gali Nuva revamp with a different mask.

Well, not on purpose, at least…

I guarantee that it’s just a coincidence, and that’s the first time I ever saw that MOC.

I put a work in progress version on the boards, but I do know that it’s a coincidence… besides, their builds are pretty different!

I really like how you put her on that stand… it really gives the sensation that it’s swimming!

This is great. A strength mask could be very useful in water.!

I really like how you put her on that stand… it really gives the sensation that it’s swimming!

That’s why I did it! It took me quite a while to get her in the right pose.

This is great. A strength mask could be very useful in water.!

Thanks! I suppose it would be useful underwater.

I think the visorak foot looks fine where it is, Might I suggest adding more around the waist area? I would also try some more custom lower legs. Other than that it;s a great moc, an I think you captured the aesthetic appropriately!

A pretty nice moc, simple in design but gets the job done! while the arms don’t move, I really like the way they look, and the pakari fits right in in blue.