Nerix the Wayward Shade, War-torn Remnant of the Lost Realm

Update in progess, I am currently waiting on parts to upgrade Nerix’s upper legs 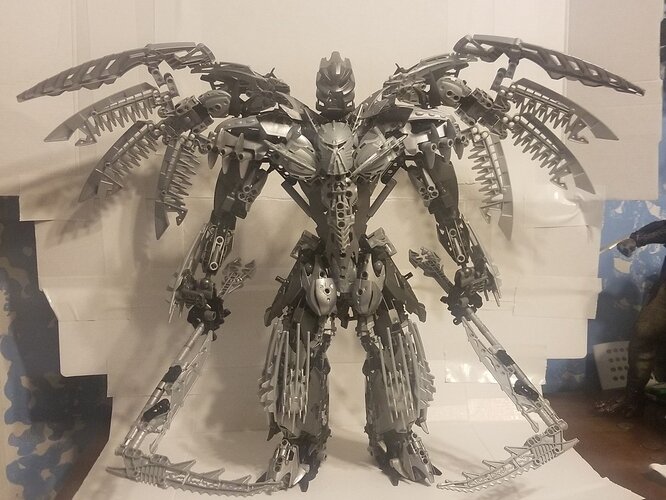 He is a permanent fusion of a Light Toa and a Makuta (names of little to no importance, as they had their minds fused together in the process as well) making him a Titan of Light and Shadow (or Twilight if you prefer.) He wears a Mask of Light and Shadow specially crafted for him, and has full control over both elements. 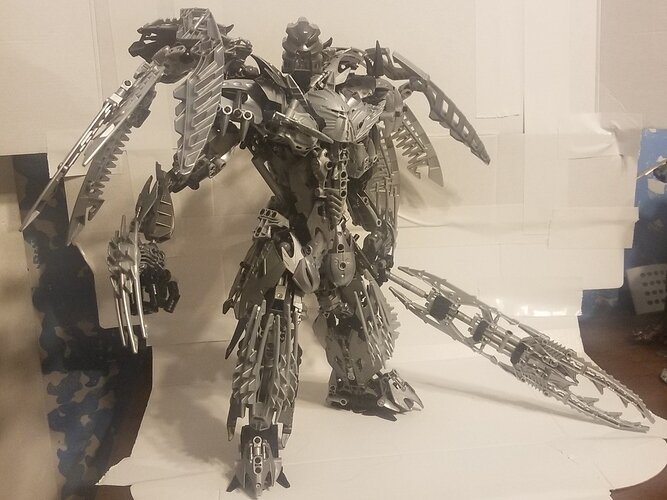 Nerix was created as an extra security measure by the Great Beings to combat Toa and/or Makuta should either or both fall to corruption.

He is from a universe that suffered great catastrophy; Mata-Nui dying, the Ignika being damaged, and the war that followed, the grief from which drove him to (high functioning) insanity.

He carries the broken Ignika with him as a reminder to keep him focused on his self-imposed mission to fight corruption wherever he finds it. He also absorbed an Olmak to allow him to travel across dimensions in order to continue his mission.

Now he wanders, adrift, a lone hunter… His exploits have made him something of a “Dark Legend” throughout the multiverse, a ghost story, an avenging angel of death, a thing that drives fear into the darkest of nightmares… I may have made him too overpowered, but he’s primarily inspired by Dark Souls bosses and Guts from Berserk, so…

Minor Update, as it didn’t really show up well in my earlier photos: I’m rather proud of this bit, I managed to make a one-eyed custom head with working light-piping!

Also, in case it wasn’t clear before, this is my self-moc.
…and for those who may be wondering he is primarily a G1/technic build. I used 4 ccbs ‘bones’, 4 G2 armor pieces, and 24 friction extenders (I freakin love those things) other than that the other 800ish pieces are good ole technic and G1.

His head is a bit too small

I had to work with what I had. Thank you for the input though.

He looks sweet. My only complaint would be that the los seem a little short.

Yeah, that was somewhat intentional. The character that was the main inspiration for Nerix (Slave Knight Gael’s boss form from Dark Souls 3) has a mutated, disproportionate body, in that his upper body is bigger than his lower body.

Welcome to the boards! For your first MOC posted here, this is crazily well done (Unlike me), even thought the head is too small. Great Job.

Thank you, as I alluded to before, realistic humanoid body proportions were not my main focus. I have problems with self-doubt that I’m trying to work past, so I’ve been making mocs for awhile now (been building Bionicle since 03-04), but only just now talked myself into posting my work. I used to believe/fear that no-one would like what I build. (Still do to a degree)

Mata Nui, he looks great, the legs look a bit short however, and the arms look a bit weak at supporting that massive weapon.

Thank you! I put alot of work into him.
As I’ve said before he is intentionally disproportionate. He can wield his sword and scythe/reaper weapon forms without issue, (I just suck at posing figures) the Greatsword however is intended to be cumbersome, crude, and difficult to wield, needing to be supported on the ground or shoulder when not being swung. As for his arms, if I beefed them up, I’d have to basicly re-design him from the ground up. (Which I don’t want to do as I currently am quite happy with his current form)
I do really appreciate your input though, thank you.

This is awesome! I love it! The Ignika in the chest is a fantastic detail.

Glad you like it, the Ignika was originally just me messing around with the chest armor, and it worked, so I kept it.

I thought about using the gold Ignika at one point, and adding in some gold highlights to the rest of the build, but I discarded the idea, as I thought it would ruin the look I was going for.

Pulling off a large build like this is really difficult to do well; I think you did a great job of it. I love how you used the same element to make up the shins and unify their texture, and the decision to make it monochrome or near monochrome means that no structural element stands out to detract from his aesthetic. I feel like he would benefit a bit from you replacing the Lhikan swords (which are pretty flat, not exactly “swords” for maybe another pair of Brutaka swords. And secondly, I would like to see the Ignika changed to gold replaced with something else that’s another color. It doesn’t look flush enough to seem like it’s a part of his armor, but if it was made out to be a prize or something added later, I could get behind it.

I used the Lhikan blades because there was a specific shape I was going for, and they matched the best out of what I had on hand. Most of his design is inspired heavily by the Slave Knight Gael boss from Dark Souls 3. In the boss fight he has a mantle/cape that lengthens and looks like wings. He doesn’t use it/them to fly, but instead uses it/them to aid in his jumps, dashes, and attacks.

The Ignika I used was a silver one my dog sadly got a hold of, I got it away from him quickly, but he left scratches on it. Story wise, it’s a broken Ignika that he keeps with him as a reminder, and to keep him focused on his mission.

Thank you for your thoughts.

Congratulations. You’ve successfully created the coolest Bionicle in the history of ever

I’m glad you like it, I wasn’t sure how this project was gonna turn out when I started it, but I’m pretty happy with the results.

Besides the head this moc is freakin amazing

Thanks, though I’m not really sure on what I could do to fix that, as I’ve exhausted most of my parts building this big guy.

That, and I’m rather proud of the one-eyed custom head I managed to create.

I honestly don’t see a problem with it, but I’m a big fan of Transformers, and alot of them have small heads compared to the rest of their bodies. Maybe that’s it?

The edge is sharp with this one.

Unless I misunderstood that comment, in which case disregard my reply.