Okay, so I found a stash f my old drawings, most of which were drawn by me between the ages of ten and twelve. So after finding some blank “Draw this Again” memes on deviant art, I decided to post some of them here, although at the moment I only have two done:

The first is a Zatana wannabe: 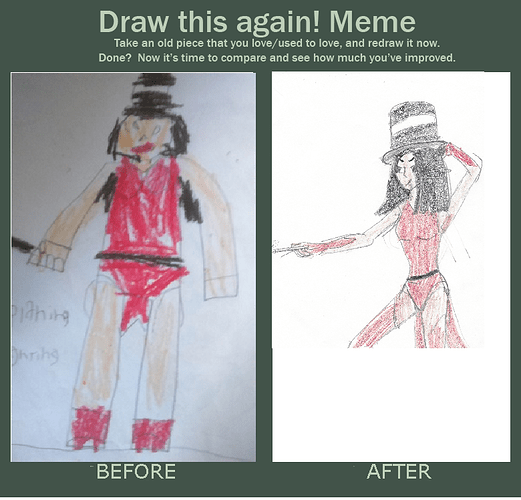 and the other one I have done…well it partly shows a woman’s bra and a bit of cleavage so I don’t think I can post it here.

I also have another one I haven’t scanned, so expect that one soon.

But at the moment what do you think of this one?

Well, the drawing level has increased

the crayons not really

I hope you don’t mind that I laughed at the differences.

The eyes on the older drawing are staring into my soul.

I’m sorru, but are you sure you were 11 when you drew the first one? Either way, you still drew better hands than I do now.

Well, the drawing level has increased

the crayons not really

I actually used a colored pencil in the second one, but yeah, I need to get better at coloring.

Don’t worry I did too.

The eyes on the older drawing are staring into my soul

######they know what you did last summer

I’m sorru, but are you sure you were 11 when you drew the first one?

I might have actually been ten when I drew that one

now thats a difference !
i kinda wanna try this

The first is a Zatana wannabe:

Well… You definitely improved. One of those looks like an actual woman, and the other one is something out of a fever dream… If I saw the one on the right, I would probably run away screaming.
/s
Props to you on improving so much though!
And I kinda want to make a topic like this now, seeing as I found my old sketchbook a few days ago and decided to sketch out a few characters from it

Hey guys, I made another one: 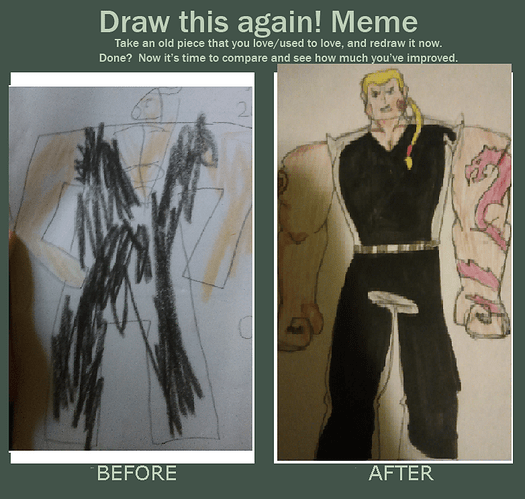 There’s a third one that I think it’s okay to post on the boards, but I think I should ask a mod first.