Hey Everyone,
I’m new here, but I’ve been watching the site for a while now.

Just wanted to show off a diagram I drew representing how elemental powers works in Ninjago. I don’t know how entirely accurate it is, but I think it works well. 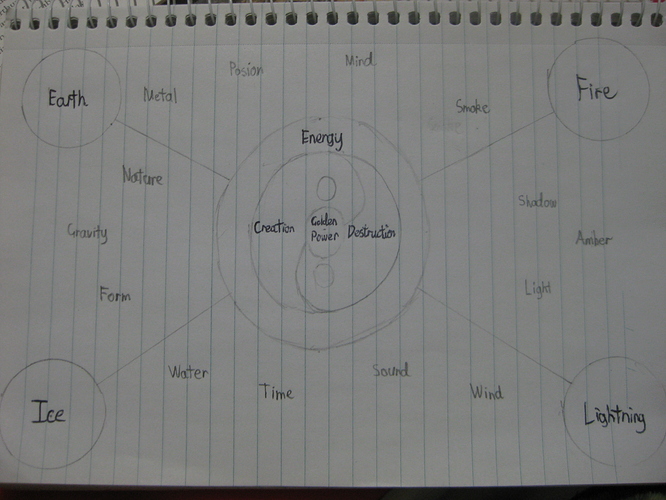 I just placed the secondary elements randomly, since barely any of them link to the four main elements.

Note: Tommy Andreasen said that Golden Power, Creation, and Destruction were not elements (He said they were the “remains” or essence" of the FSM), but I’ve still included them to show how the powers branched off him.

It is important to remember that Destruction is not quote-on-quote “evil”, it just the opposite of Creation. Neither one is “good” or “evil”. In fact, I would love it if in future, there was some kind of spin-off that shows a sensei of destruction raising a team of Ninja to destroy the “evil creations” of a villain. It would really drive home the latter.

@Mesonak @Eljay
This whole elemental power thing could be an interesting topic to talk about on Ninjago cast if you don’t have anything already planned.

Also, I am unable to use Twitter, so it would be really nice if someone could run this by Tommy Andreasen. Would love to hear his thoughts.

So yeah, tell me your thoughts and feedback

So how does Darkness fit in, as in what The Overlord used in the Stone Army arc(and presumably what he was born of)? Was that what you have labeled here as destruction? I don’t believe we’ve ever heard it referred to as such in-show.

This diagram basically shows how the powers branched off the FSM. The reason Darkness isn’t there, is because it is the opposite of Golden Power and is not an element.

Destruction is Garmadon’s element. Creation is Wu’s. These terms were established outside the show by Tommy Andreasen. (Although I do believe that these may be looked into in the new season)

Thanks for the feedback all