So I’ve been working in my spare time (especially difficult during the HSC), and have finally finished what is my most ambitious MOC to date: The Battle for the Marbled Temple!

The concept is fairly loosely based on the Skybound wave, and has the characters from that wave as portrayed in the sets. Essentially it consists of the following: I like floating islands. I like Ninjago. I especially liked the ‘Djinjago’ saga. I also like skulls. Thus, a pair of floating islands, with the Ninja attempting to retrieve the revered skull of the Elder Nikolai, while under attack by the Sky Pirates (anyone else getting severe Edge Chronicles vibes here?)!

In addition, the Temple is designed to lift off, sitting on tiles and recurrent studs as an anchor. This is just to help in transport.

An overview of the islands: 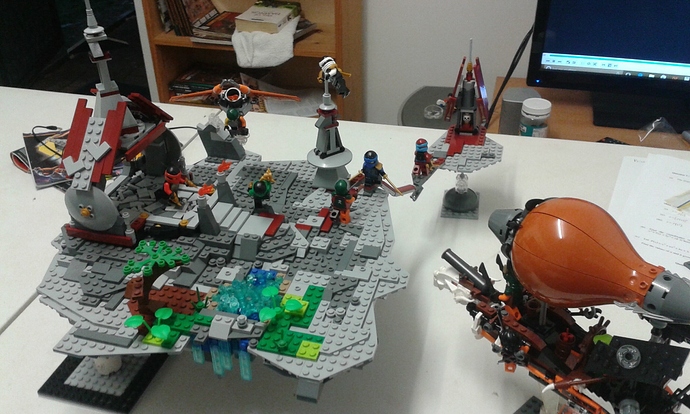 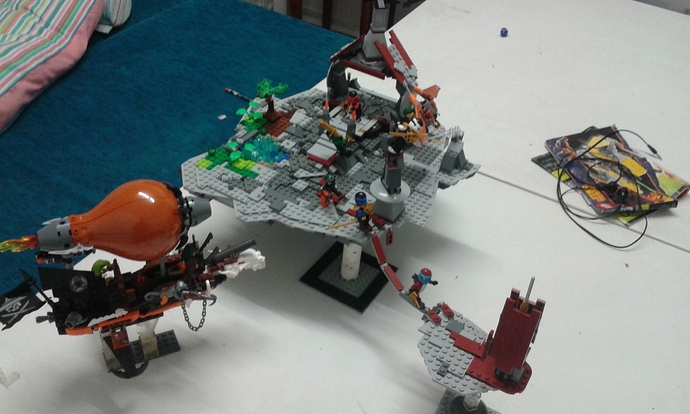 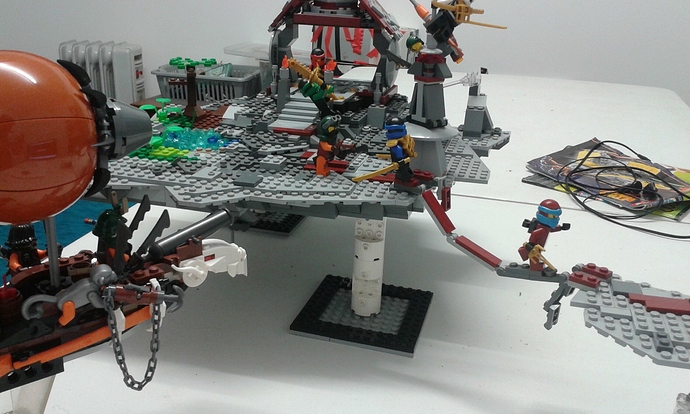 A view up the port side of the Raid Zeppelin attacking the Island: 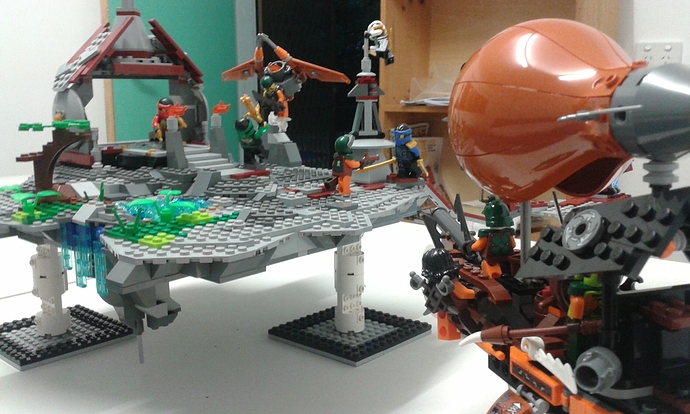 More pictures of details are contained within the summary tag. The stands are simply there to hold it up, I don’t have enough clear pieces to do it properly unfortunately.

Comments and criticism much appreciated!

Holy crap this is amazing!

I’m impressed with how you have something that large and wide held up by sticks.
Pretty cool!

while this is good…

it reminds me of LEGO Universe.

i wonder if the Skybound season is in a way a refrence to it, same with Chima’s status as a floating island.

This is really solid, and I love the temple floor.

My only qualm is that perhaps it could use a bit more in the way of the temple’s infrastructure; it looks a bit too much like an odd spaceship with a a couple lazer cannons to me. I get what those structures are supposed to look like, but they end up seeming too greebly and not round enough to not be some kind of machines.

This is a great creation!
I absolutely love the pattern of the floor in the temple, it’s great.

@Garnira I’ll take a look at it, are there any particular bits you think need adjusting?

Mainly the little shrine-like bits, but it could also stand to gain some more structures. I’d personally look into making some Torii-esque gates along the path(or something similar).

That’s a good idea @Garnira, I’ll take a look at it when I have some time. Thanks!