Special thanks to @Ven for featuring Novan on the MOC Spotlight!

Check it out here!

Time for the third rework of my Doomed Toa MOCs!

BIO: Novan was an oddity among the fighters of Stelt’s arenas. Not only was he of the unnatural foreign species, Titan, but his strength and power against his opponents was unparalleled, as was his strange obsession with battle. Being a Fire Titan, Novan also frequently utilized his elemental advantage against those he fought, an act somewhat frowned upon but one that still won him many a match. However, Novan’s lust for strength drove him to extreme lengths. From an arena witch doctor, he heard the tales of a strange Rahi beast that multiplied the strength of he who touches it 100 times over. Novan left the battlefields of Stelt for the deep, dark caverns of the Southern Continent, and much to his surprise and delight he found the legends were true. Novan had found the beast, and reached out to touch its slick, black body when the creature latched onto him. He gained the strength he desired from the creature, but at a huge cost: it was now a part of him, and his battle lust drew him to become increasingly volatile and dangerous. Without his energy, the beast would die, but without the beast, so would Novan. 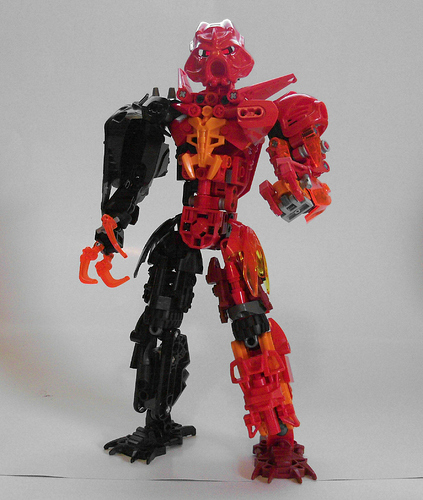 Here he is! Novan, the Fire Titan! 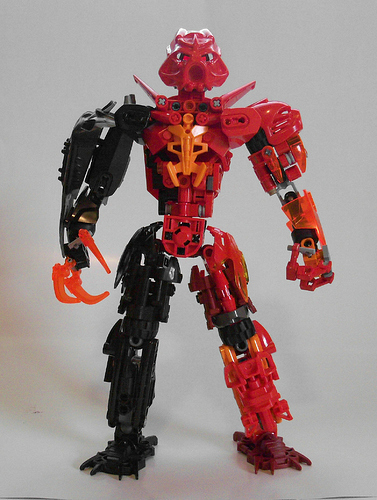 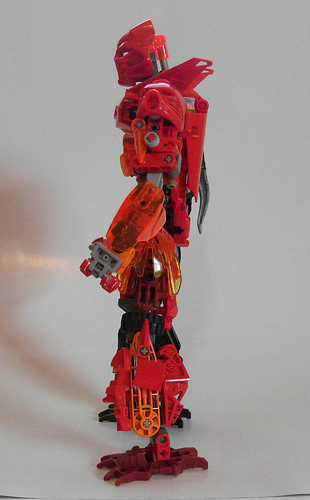 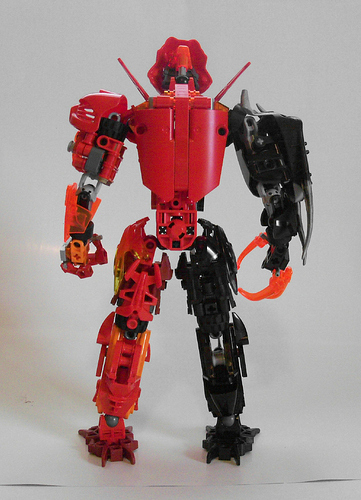 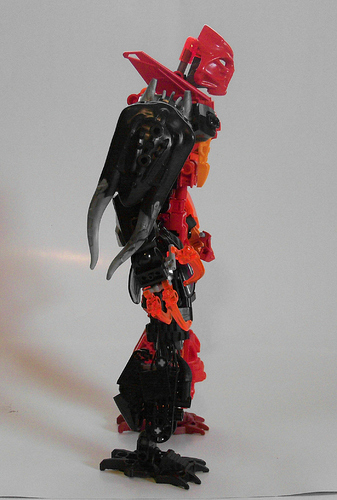 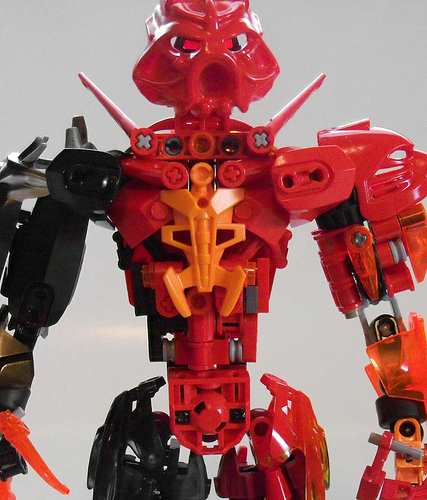 Close up on the torso. I wanted this new Novan to be a big, brutish character, so I kept the Ghar torso as I liked its proportions, but I’ve definitely improved the armoring here I feel. 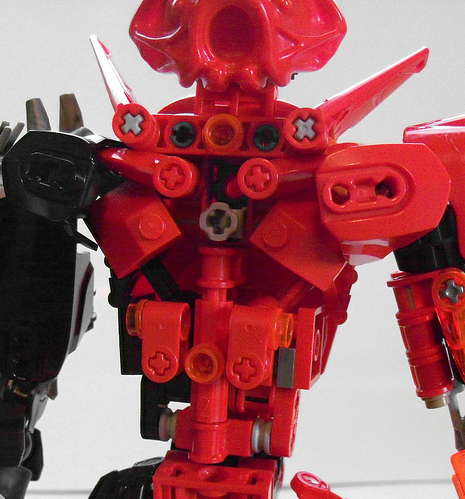 I was overjoyed to realize the Stars armor piece fit in between the Bohrok eyes and the slope bricks. I tried it in red, but it felt too bland for me, so it’s orange. Also, the shoulder/neck wings. I love those too… 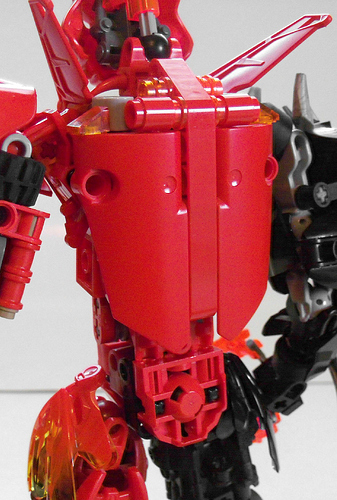 The back is probably my least favorite part of the MOC. It’s horridly flat and non-textured, so I definitely need to go back over this and find a better way of doing it. Right now it serves its purpose, and helps fills gaps that can be seen from the front. The in-story reason for this is that it’s a massive back plate, as his back is a weak point for such a large being. 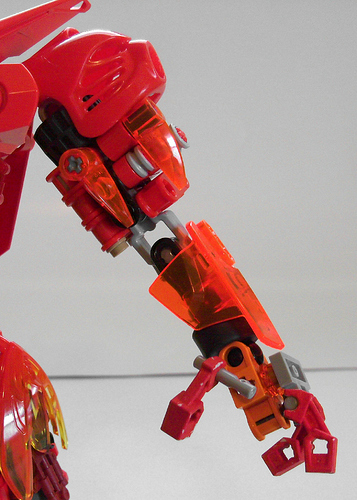 His non-infected arm (yaay, more asymmetrical limbs!). The upper arm I’ve had on him for quite a while, I just never got around to releasing an update post back when he was still Toa Novan. I personally quite like it. The lower limb is basic. 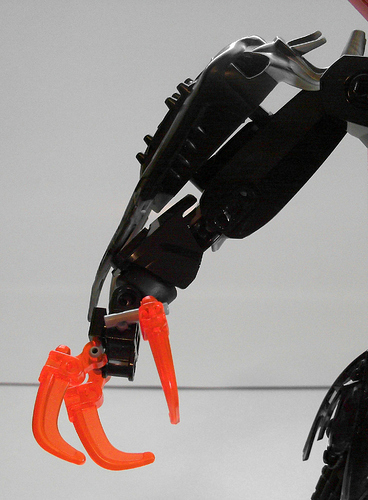 His infected arm. This is also almost the same as before, just with a shorter forearm for proportions. I’ve also made his claws trans-orange, which I feel really pops and looks great! Still a bit of fire underneath that black sheen! 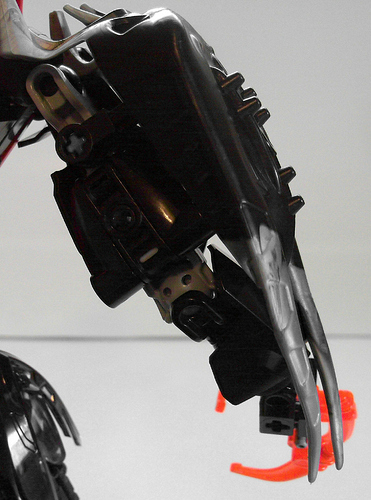 I simplified the Leech attachment and did some average armoring back here. 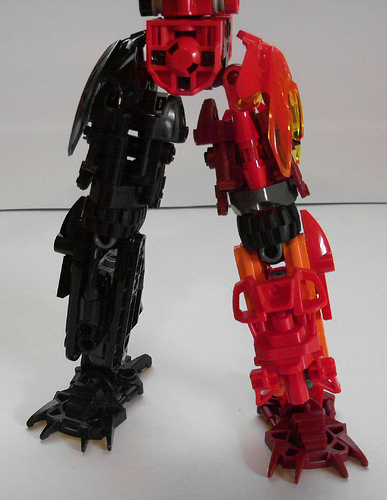 Literally the same legs, minus the hips. 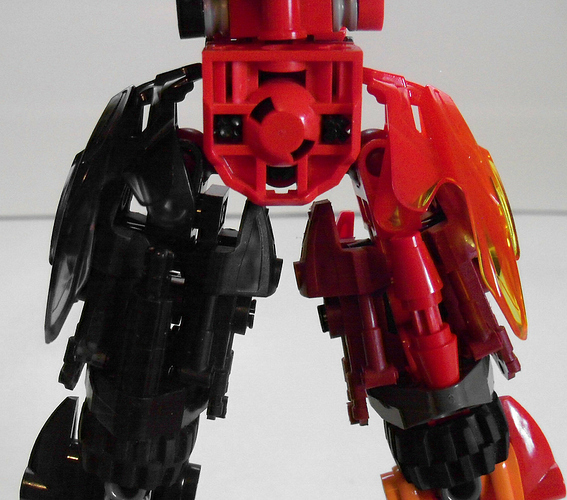 The gaps are horrible, I know. I need to get some red and black system plates to fill them in (you can see on the infected side I only had one plate). I had to remove the top Throwbot feet to attach the masks, which I really love as they help with the shaping a lot! 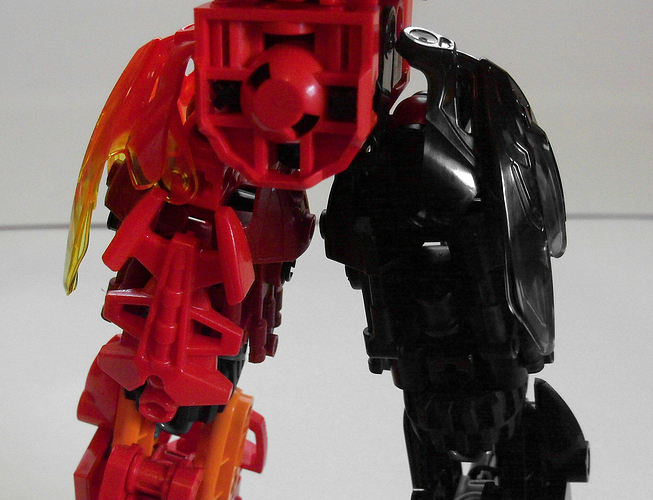 Yea, back of those aren’t good at all. I may paint a gold Stars armor piece black for the infected side. 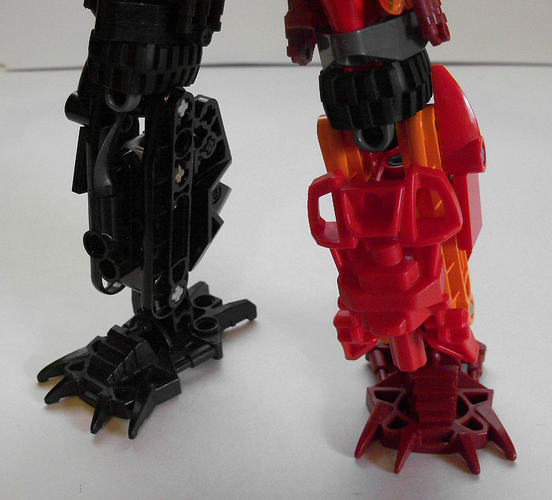 Shins. Same as V3, except on the infected knee I’ve turned the spike into the joint to blend it in better. 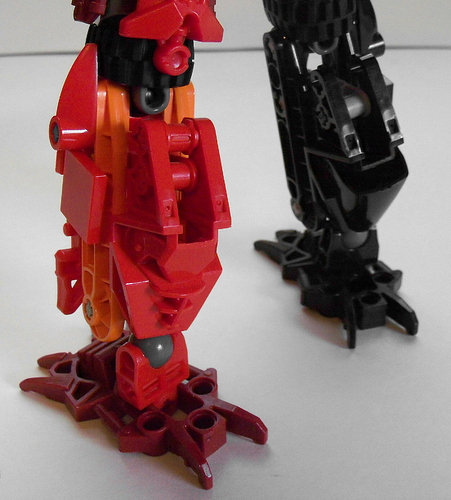 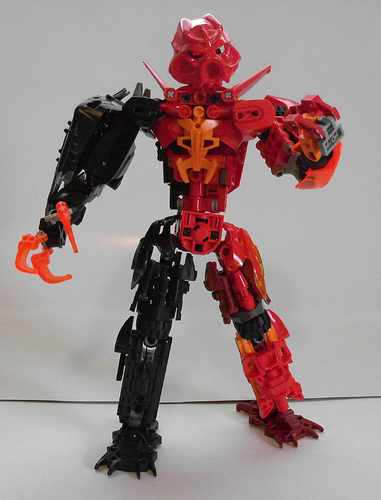 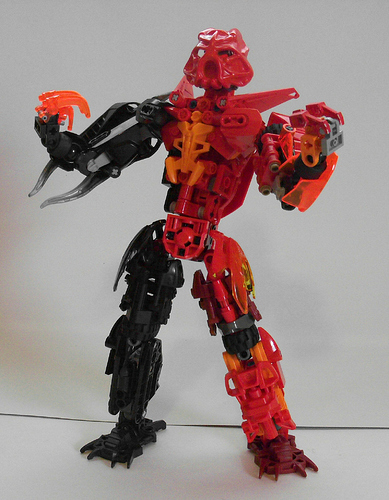 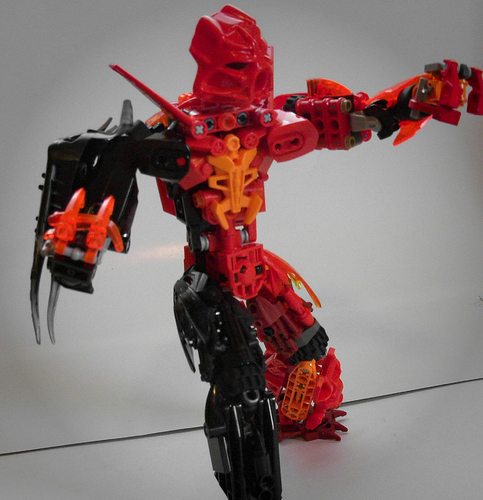 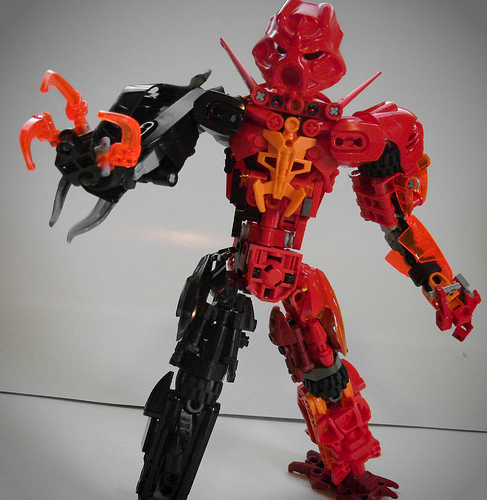 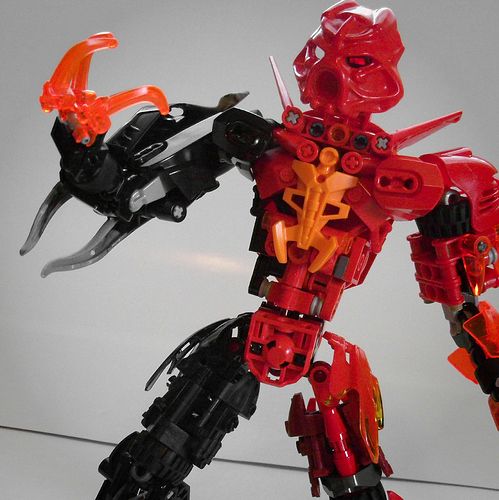 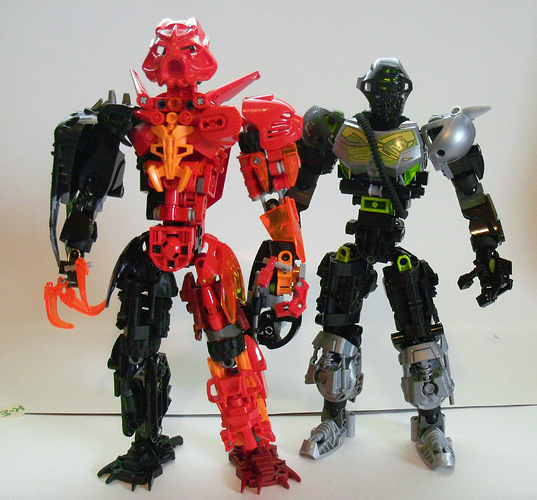 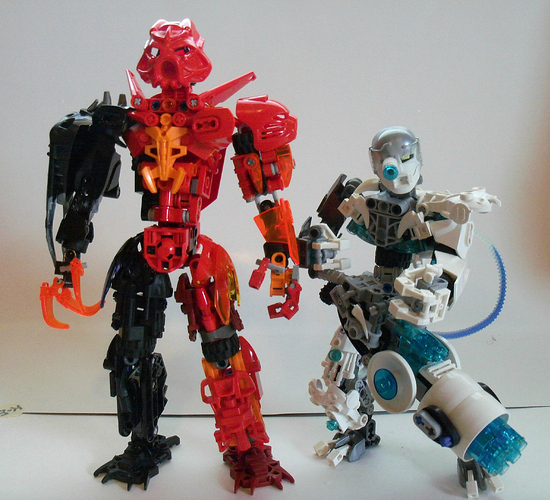 I have to admit, Novan never was my or anyone’s favorite of my MOCs, but this new version I’ve really grown a liking to, at least by comparison! Despite his flaws that I need to work out (i.e. the back, his neck area, and the thighs), I really like the look of him!

Critique appreciated! One more to go, but there will be quite a delay, I still haven’t built the last one!

Special thanks to @Ven for featuring Novan on the MOC Spotlight!

Check it out here!

I’m not a big fan of the Mantax head on his infected shoulder. I feel like it’s too low and throws off the shaping of the shoulder.

As for the rest of it, well done. It looks great, excepting the stuff you’ve picked out yourself. I thought the use of the Protector masks for the hips was especially creative and works well.

Issues I have are the Mantax head, bit too low, and hten colors: Needs more trans orange in the black limbs, and maybe some in the red, but he definately either needs more dark red around or remove it

otherwise it’s bulky and has some interesting shapes

this is sweet! however I think it would look even better if half the body was black like his limbs, and that dark red foot annoys me but I guess every one has a part limitation at some point.

I’d like the thank @Ven for featuring my MOC on the MOC Spotlight! It’s honestly been a goal for a while now and I’m very glad it’s one I’ve achieved!

The critique was mostly the same as Novan has been receiving, but in at all it was extremely valid criticism and there were a lot of points I had never heard before!

Definitely will be working to improve this guy in the future! Thanks again!

Hey man I really think this is a cool moc but I am not sure if I agree entirely with the black arm. I think the shoulder/upper portion of it is a bit too bulky and smooth compared to the rest which is pretty technic based. That said though, I like the execution and the colours work well together. Congratz on being featured!