Usually, a Lego set's worth is measured in price/pieces. Obviously, this ratios are different between Bionicle and System sets. However, the cost of producing a set is not related to the number of pieces. Think about it. Clearly it costs more to make the Mask of Ultimate Power (sniff) than a Lego stud. The MoUP uses (would have used, again sniff) much more plastic than a stud. So, the cost of making a Bionicle set is entirely dependent on the weight. In order to generate as much profit as a system set, it would have to sell more. Don't believe me? According to Brickset, Lego 10210, Imperial Flagship (a 2009 tall ship with 1556 pieces) weighs 2590 grams. By contrast, Lego Pohatu Phantoka weighs about 310g. Doing the math, it would take $108 dollars of Pohatu to equal the mass of the I…


And when I was typing a comment on it, an idea hit me. I think that if Lego brings back Bionicle as a system theme. The Constraction figures that may get added as a side set could be somewhat like this Mega Construx set. (Notice Atheon, not the Harpy or the Warlock.) 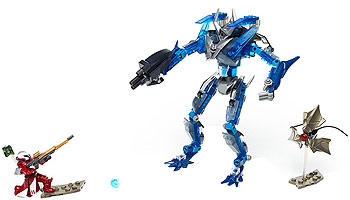 In other words, Kinda style them like the Mixels (The only system based constraction figures I can think of). If @DinosaursUnited’s theory is true, then making them a system based figure.

This post is my answer to how the response: Yes, I’m okay with that compromise (vote this if you voted “No” in the last poll) in the poll can be handled.

Another solution to this would be return Bionicle to a technic theme. If it was system, Bionicle would have to compete with the likes of Ninjago. If the theme was entirely made of Axalaras, Skopios, and Scout Trooper speeder bikes, it would compete against technic bulldozers. Obviously this means less sets per wave, but still.

Additionally, because the set would be priced higher, and have more pieces, it would be conceivable to aim the story at an older fanbase.

Or we wait until Ninjago ends and then we release Bionicle G3 at the wake of the vacuum that Ninjago left.

People also though the same with Bionicle when it was at its high point.

True, but it’s bringing in cash for Lego, and I doubt they would stop making the theme unless it stopped making money, which I don’t think is going to happen anytime soon.

Its the only way Bionicle G3 is gonna be a thing, otherwise its going to compete with the similar theme of Ninjago.

Then G3 ain’t happening. I mean, if we hypothetically said ninjago did end, then it would.

Then G3 ain’t happening. I mean, if we hypothetically said ninjago did end, then it would.

No offense guys. but this topic was to debate whether or not you can make a Toa using primarily system.

If you want to talk about Ninjago, go here.

People also though the same with Bionicle when it was at its high point.

I mean, Ninjago is getting a movie soon. It’s a top seller, and seems to only be growing in popularity. The movie will boost this.

I don’t see it dying soon. Maybe give it like 3 years.

As for constraction in Brickonicle G3… Doesn’t that go against the point of calling it Brickonicle?

to be fair, Legends of Chima also had Constraction and it was a brick theme. Same goes with Star Wars which still has Constraction sets being made for it.

one should not say: “its BRICKonicle, so constraction will never happen.” Plus i think G2’s cancelation have just made many people really blind to the fact that Constraction is still around.

If constraction really was a big failure as many here have apparently started to belive it to be because of G2’s cancelation, then why is LEGO still making Constraction sets?

If constraction really was a big failure as many here have apparently started to belive it to be because of G2’s cancelation, then why is LEGO still making Constraction sets?

Because SW is the most safest brand to sell it through that doesnt need any big work from LEGO to promote.

It’d be silly to make them large system figures when the plan is already to have an accompanying CCBS figure line for collectors(like Chima did).

Plus, the biggest draws of making it system are the potential to have location based sets and the familiarity of the minifigure. In a sense this kinda dodges the point altogether.