So here is my small entry for the Brickonicle contest, I call it 'Assault in the Mountains.' It has 231 pieces and would most likely retail for $19.99 (20 dollars). I had to spell the title wrong putting one s in assault because it picked it up as a swear for some reason, so that was not a mistake. Anyways my model is based off a scene taking place during the Toa Mata's search for all the Krana. Kopaka encounters a Kohrak and does battle with it. I made the box art in Paint, so try not to kill me on that if it's too bad (and ignore the red flag, I messed up on that part). [image] The set comes with two minifigs (Kopaka and Kohrak) and a blue 1x1 flat piece for a Krana. It can be seen along with additional shots of the minifigs and set here (I 100% suggest everyone checks those out. I made…


There’s my entry. I purposely spelled the title wrong. The thread says why. Don’t forget to see the additional pictures. They are important.
JonBlueFire January 18, 2017, 12:25am #133

Another question, Eljay:
Did you ever specify the time zone of the due date?
Like, is the deadline February 4th, 11:59 pm Eastern Standard Time, Central Time, etc.?

Another question, Eljay:Did you ever specify the time zone of the due date?Like, is the deadline February 4th, 11:59 pm Eastern Standard Time, Central Time, etc.?

I hadn’t, but that is gonna be the end time. I’ll add it, thank you for reminding me!

Oooh, my fingers are tingling with the posibilities, sidenote, if I get first prize, but don’t want the set, could I theoretically bestow it apon a friend?

This is another thing - can the first prize be a $40 LEGO Gift card or something?

So, here is my entry. Hope you all enjoy!

you should order 40 dollar worth of black axcels

My second entry for the contest, which has been pretty fun

[image] Lewa Vs. Skull Slicer Pieces: 332 Price: $30 The Toa have reached the ancient City of the Mask Makers. As Lewa enters the ruins of the battle arena, he loses his golden mask to the menacing Skull Slicer! Help Lewa defeat the slicer and retrieve his mask! But watch out for any traps and the changing terrain of the arena floor. [image][image] Here’s Lewa, Skull Slicer, and the golden Mask of Jungle on a pedestal. [image] [image] Portions of the arena can be taken apart and rearranged. [image] One pillar is booby trapped with spring-loaded shooters…[image][image] And the other is rigged to blow up/crumble. Hope you enjoy~

This is my first entry to this contest.

I was always disappointed when we only got vehicles for the Fire, water, and Iron tribes. So, I made a Jungle tribe vehicle. Set name: Venom Striker battle Pieces: 180 Price: $20.00 Help Vastus and the Le-Matoran defend Tesara against the vicious Visorak! [image] Includes three vehicles: Orkahm's defense cart [image] Boreas's defense cart: [image] And the mighty Venom Striker! [image] If the Visorak get too close, fight back with Vastus's Venom Talon, stored on the back of his vehicle. [image] Includes six minifigures: Vastus, Orkahm (with a modified Huna), Boreas (with a Kakama), a Vohtarak, a Keelerak, and an Oohnorak. [image] That's that! As always, any comments, criticisms, critiques, or cobras are welcome.

Got one set done, I’ll be back to show the rest.
http://board.ttvchannel.com/t/brickonicle-contest-entry-ko-koro-gateway/32773

#NEW FROM LEGO BIONICLE The ruthless Muaka Tiger is in Le-Koro! [image] Build the NEW Turaga Hut to deliver a counterattack against the malicious Rahi beast and his handler, the evil Makuta Antroz! [image] The day has been saved with your help! [image] Le-Koro Raid from LEGO BIONICLE! LEGO and the LEGO logo are trademarks of the LEGO Group. ©20XX The LEGO Group. This is my second entry for the BRICKONICLE contest, set no. 77777: Le-Koro Raid. It includes a non-canonical fight between a Muaka with Antroz and Tahu, Lewa, Kongu, and Turaga Matau. [image] Set Info: Price: $59.99 USD, 49.99€, £55.99 Pieces: 624 (not including extra stud ammo) Minifigs: 5 Ages: 8-14 [image] Muaka Tiger The Muaka Tiger is considered to be the most powerful Rahi by the inhabitants of Mata Nui, …

My second entry for the brickonicle contest! Probably my last, but you never know! This took almost a week to build (because I only had like 2 hours a day during the week to work on it). Enjoy!

[image] Set Name: Axalara T9 & Rockoh T3 vs the Jetrax T6 Piece Count: 481 Set Price: $49.99 ($50) Join Lewa and Pohatu in a high speed chase in the skies to take down Antroz and the stolen Jetrax T6! [image] Includes 3 minifigures: Lewa, Pohatu (he’s yellow b/c I had no orange limbs), and Antroz. [image] Axalara T9: [image] The minifig scale Axalara T9 has 2 primary functions: the landing gear and the stud shooters. [image] [image] [image] You are able to detach the stud shooters from underneath the vehicle and put them on the sides. You can also put the landing gear up and down. However it is only connected by an axle in a pin hole, so the only friction you can obtain is by squeezing it tight. Rockoh T3: [image] The Rockoh T3 has 2 functions: the side blades and the stud…

Alright this is embarassing

Where is the new post button on the forum? I don’t usually go on TTV

“Read FAQ” oh haha thanks for the reward

On the home page there should be a big fat plus sign in the bottom right. 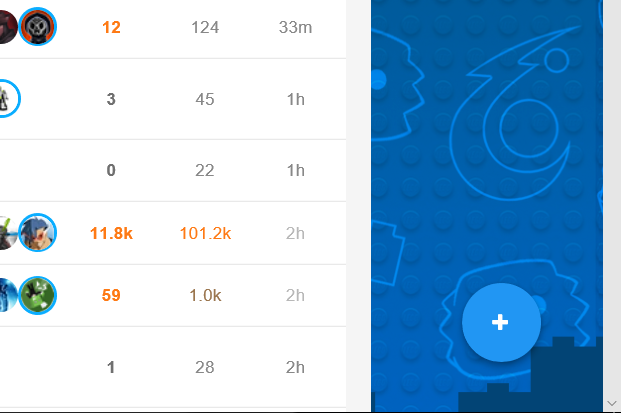 (you also have to be out of this topic.)

Oh my gosh how on earth did I miss that. The color blends in so well. Thanks!

And of course it’ll be out of this topic. Thanks! Can I save drafts?