I am always way too early… I need to go back to the future now for my morning coffee.

An artist is never late, nor is he early, he arrives precisely when he means to.

Fashionably late is perfectly acceptable and entirely expected of any artist worth anything.

N-no, I was talking about how artists tend to ignore deadlines completely. As for “consistency”, as an artist myself, I don’t even know what that is…

You are actually lucky because at least I answered to your PM in time, sometimes it can take me months

some days I remember this and I miss it

Still waiting for Deadeye to be featured

still waiting for this to exist

Okay well I might as well come clean here, between a job, classes, and tendonitis I’m probably going to freeze this project indefinitely.
I don’t think I can keep up with it tbh. Comic work is hard, boring, and time consuming.

That’s okay!
if you want to end the story you can always just say everyone died in an
explosion

Well, it was an enjoyable experience with some excellent art. If you ever change your mind in the future and want to return, we’ll all be happy to have it come back, but if it never does there’s no hard feelings.

Thank you for having it happen at all.

Welp, in any case here is the last stuff I had worked on. 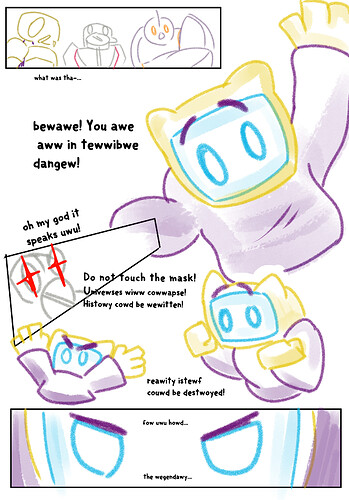 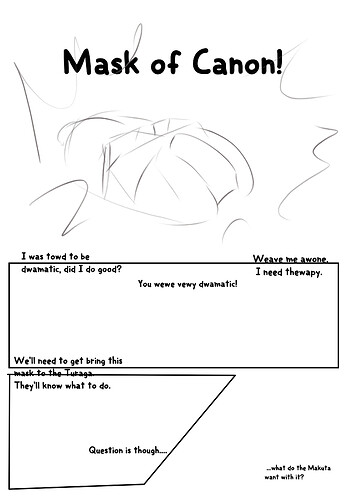 Since there’s a pretty good chance this won’t matter, here’s the rest of the story:

The MOC Toa discover that the Matoran had stolen the Mask of Canon from the Makuta Dhampyr, who was contracted by the leader of the MOC Makuta (MOC-uta lmao) to figure out how to use the mask. Makuta Dhampyr discovered that the mask of Canon had the power to make anyone a part of the official canon of the bionicle story. The Mask of Canon couldn’t be used without the Toa of Canon, however, and without the toa of canon it was unstable and dangerous.

Dhampyr recognized the dangers of the mask’s powers and opted to destroy the mask, but the leader of the Makuta, Eilrach, demanded that Dhampyr figure out how to use it without the toa.

Boreas was part of Dhampyr’s research and stole the mask, which was where the story starts off from.
The three toa fight Dhampyr, blah blah blah they see the mask, and then Cordax zaps out of the sky.

Toa Centai and her colleagues realize that with the mask of Canon they could be a part of the Canon and no longer be classified as MOCs. They could be official parts of the Bionicle lore, and so they decide to take the mask to Topshelf, the city of Toa to try and find the Toa of Canon there.

Dhampyr returns to Eilrach, who exiles him from the Makuta for failing to keep the mask. Eilrach sends out Makuta to attack Topshelf and steal the mask back.

Dhampyr, ousted from the Makuta, vows to destroy the mask and any means of

When the three toa and matoran reached Topshelf, they arrange a meeting with the leader of the Toa, Toa Artillery, who in his wisdom of being one of the oldest MOCs created tells them that the Mask of Canon can only be weilded by someone from the actual canon. The MOCs all scratch their heads, recounting who made them and some small cute details they remember (“I used to have wings, but they needed those parts for something else so I don’t anymore”)

And they eventually ask Boreas who created him and they discover that Boreas the matoran is from the canon. A background Le-matoran to be specific. The fact that Boreas is Canon was why Dhampyr was researching him in the first place.

All the Toa urge Boreas to put on the mask but the matoran is -understandably - terrified of the idea. The toa are pressing even harder on the matoran, who gets more and more distressed. He runs away out of fear. The toa chase after him but they lose him in the bustling city of Toa.

However, just as they lose Boreas, the three bat creature MOCs someone posted attack the city. They are super powerful (and as a gag I was going to draw all three of them as super buff guys too lol) and they destroy Topshelf looking for the mask. Centai makes a joke about deja vu for the first bionicle movie.

While the three bat “sisters” were attacking, Dhampyr having traveled to Topshelf secretly finds Boreas and kidnaps him.

Aaaand that was kind of as far as I had planned. I hoped to get farther but it looks like that’s not going to happen. Sorry guys, it was fun!

Ah well, it was nice while it lasted.

cordax is the discord icon but a furry

You’re all good, and man, that was a lot more story than I expected. Sad we won’t get to see it, but glad we got to see what we did see. Thanks for including Drevick, and making it happen in the first place.

the three bat creature MOCs someone posted attack the city. They are super powerful (and as a gag I was going to draw all three of them as super buff guys too lol)

you made me a furry

I don’t know how to respond to this 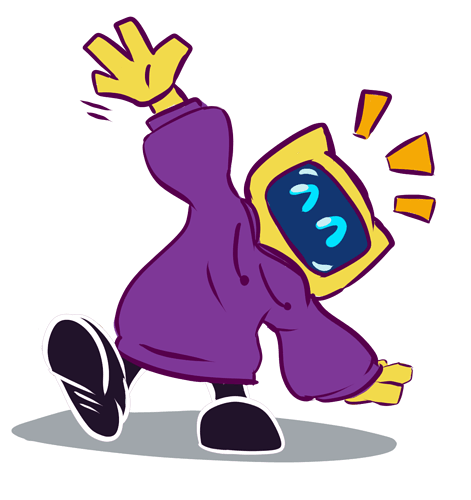