Name: Ghabix
Nickname/Title: Guardian of Jungle (tho he, Tarkur and Era might be the only persons to use it)
Element: Jungle
Equipment: Shot gun, sword
Appearance: average Jungle Okotoan with a heavily damaged dark green and gray armour.
Bio: Ghabix is still alive, despite the fact that nobody knows where he currently is. 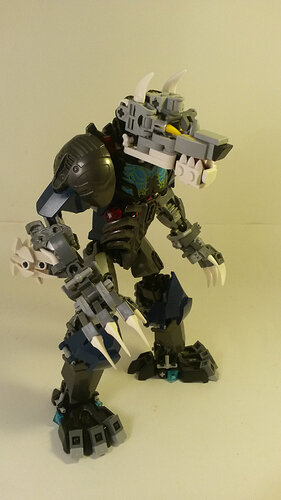 Name: Virky (Veir-Kie)
Element: fire
Equipment: Short knife, a pouch and a hand crafted fire region emblem.
Appearance: Virky sports a silver/red noble Ruru shaped mask and wears red armor and clothing with silver and black details.
Personality: Cheerful, kind, naive and a bit on the shy side, enjoys talking with people but has a hard time talking herself especially with new people.
Bio: Virky is a fire okotan from the fire region but lives in the jungle region with her step brother Domau. Virky has a decent education but no particular interest in the sciences like her step brother. Virky lost her true family at a very young age and was later taken in by Domau.

Didn’t Tarku mention her at all?

Tarkur doesn’t know that she’s alive and has very loose memories of her. To retcon that plot hole I’ll say she’s documented in his family album and everyone who have read it would know this but she was thought by Tarkur to be dead as well as her parents also he might not have remembered her at the time or considered it unimportant in his explanation of his past.

Name: Arion
Element: Shadow
Equipment: Sword, shadow cloak (that allows him to teleport wherever he want on the entire island), one gunmetal grey gauntlet that work similar to Hitora’s, tho weaker, a dagger, a shot gun.
Appearance: Tall Okotoan covered in fully black armour and one long cloak with a hood. His armour might have some spots of rust here and there. Arion became a little bulkier and taller since the last rp.
Bio: Arion is also somewhere out there, just like Ghabix.

Just a reminder that shadow was not an active element in the last iteration of this RP, and that may have some bearing on how future characters work

Depending on what Jayzor may say

Well, Jayzor said all previously approved characters were automatically approved, and Arion was in the last iteration.

At least thee or four characters ( including Arion) had shadow as their element.

As TheMOCingbird and Vladin have said, Arion was in the previous RP, and shared his element with others such as Erik (played by OmegaTahu). So unless Vladin added something major, he’s good to go.

Sorry, forgot about this. Approved.

Name: The Beast King
Element: Jungle
Equipment: Command Staff
Appearance: a massive entity, The Beast King looks to have a mask of control, has enormous antlers, and looks to be armored with, or even made out of, plants and deceased animals.
Personality: The Beast King is quiet and methodical, he shows great interest in those who he seems worthy of causing great change in the world,
Bio: It is unknown who or what the Beast King is. He came from the forest, and commands a small but power hoard of best folk. It’s been implied that there has been a ■■■■■ in the power dynamics of the beast folk, but most will deny this accusation, instead praising the Beast King as their leige and creator.

What exactly does the Command Staff do? How physically powerful is he? And what do you mean by “beast folk”, those aren’t exactly something established in G2, to my knowledge.

It’s just a fancy stick. Despite his large size he probably has below average strength, and the beast folk are just various creatures that work along the same lines as The Wolf.

The first two sound alright, then. Are all of these creations of roughly Okotan-level intelligence? And am I to assume that this is The Wolf’s mysterious master?

Most are this, or dumber.

As for the other thing, since The Wolf was excommunicated from his organization, there was some sort of ■■■■■ in power dynamics that led to the Beast King taking control of the organization’s assets.

I see. How many beast-people are we talking then, generally speaking? And how often are they going to play a role in events?

I’d say about fifty exist, but the number is probably smaller due to some being dead or exiled. The number might be closer to 35.

I’m not really sure how I would answer the last question, but I imagine that the beastfolk would normally stay within the confines of their realm, unless provoked or ordered otherwise.

And where is there realm, about? What sort of situations would provoke them to leave it?