I know there are more original designs out there, but this was based on reason and style consistency rather than advanced MOCing skills. There will be a lot of unique and impressive opportunities for Artahka and GSB, but for Helryx, Nidhiki, and the Toa Haga, straightforward and stylistically consistent is the name of the game.
She’s unique among the Mata build- as different from any of them as they are from each other, and also follows a number of set standard customs from 2008. 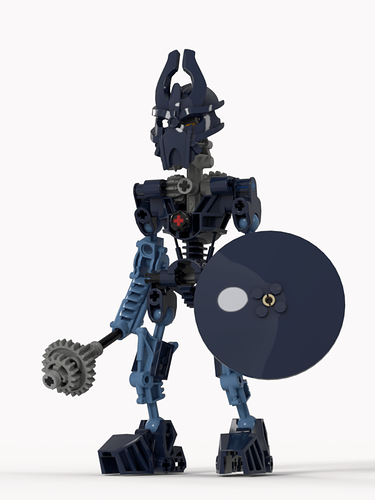 I wanted her to look how a set would look in 2008 when she makes her first physical appearance in the story, so she features the brittle ball/socket parts from 2008, the Av-Matoran variant of the classic feet, as well as red, blue, and tan pins and axles that became standard around that time.

“But what about unfamiliar to Takanuva?” Yeah, I know. And basically, in the name of everything else - the frailty, the stylistic consistency with the Toa Mata and with being the first ever Toa, the appearance of being ancient - that one detail took the most… liberal interpretation possible. The mask is pretty foreign. Them 2008 socket joints are foreign to him. And this is a world where nobody ever asks the turaga why their feet look like faces. I always took that line to be referring to a custom, unique nuva-like armour piece anyway, which she clearly isn’t wearing in this picture anyway. Whaddaya gonna do?

The mask as I’m sure you’re aware is the custom one from Gavla. She also looks pretty good in the one by KhingK, but I couldn’t get the file to work properly.

Stud.io doesn’t contain a proper Mata head, so I also have to thank the folks at this post for those parts.

Thanks for looking, and be sure to vote for the only Helryx who fits in an Exo-Toa!

I seriously love the mace on this one, especially as an “old school” design.