This art came from maybe before summer this year or late last year. I re-imagined basil the bat lord with a lot more edge and as an evil vampire serial killer who uses terror tactics to terrify the enemy, like using human corpses part of his armor (Lovingly ripped off from this ), hence fright knights. I imagine him as starting out as the seventh son (more in tune with the supernatural), and was cursed to become a vampire by Willa the witch. This would corrupt him and lead him to try to overthrow the king, brining him into conflict with his six older brothers (who each belonged to a different classic castle faction). Although he spread destruction and anarchy with his armies of sadistic killers, he ultimately failed to take over and was finally killed fighting his older brother, the leader of the dragon lords. 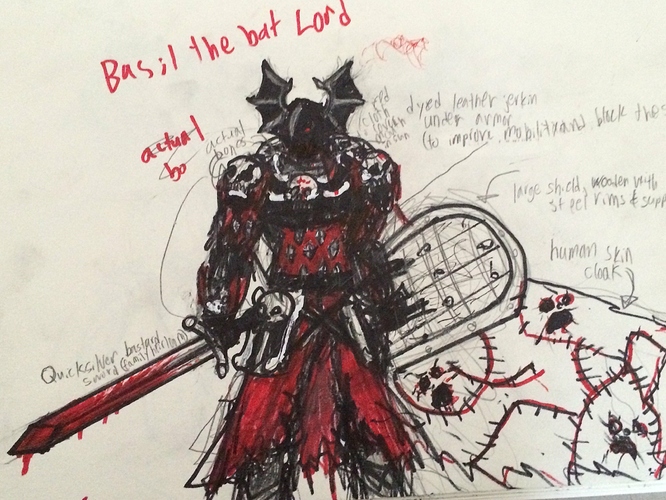 Edgy and nicely drawn. I like the blood pattern on the sword.

Basil’s been workin’ out… (http://brickset.com/minifigs/cas022/Fright-Knights-Bat-Lord-with-Cape)

This looks really good! I love all the little details you included like the skulls and such, and especially modifying the helmet a bit. The actual Lego one is pretty cool, but this one looks way more menacing…

Woah basil got an upgrade.

Basil learned a thing or two from Vladek, I see.

But here’s the real question: Does he have a race car?

Looks pretty cool, reminds me of Vladek with the sword. The helmet/head is an interesting design and rather menacing looking. The torn clothes showing jagged diamond-like aspects of his body is also pretty cool. I like the skulls though feel they need a little more spacing on his left side - given they feel a little pushed together.